In St Gallen, in the UNESCO heritage 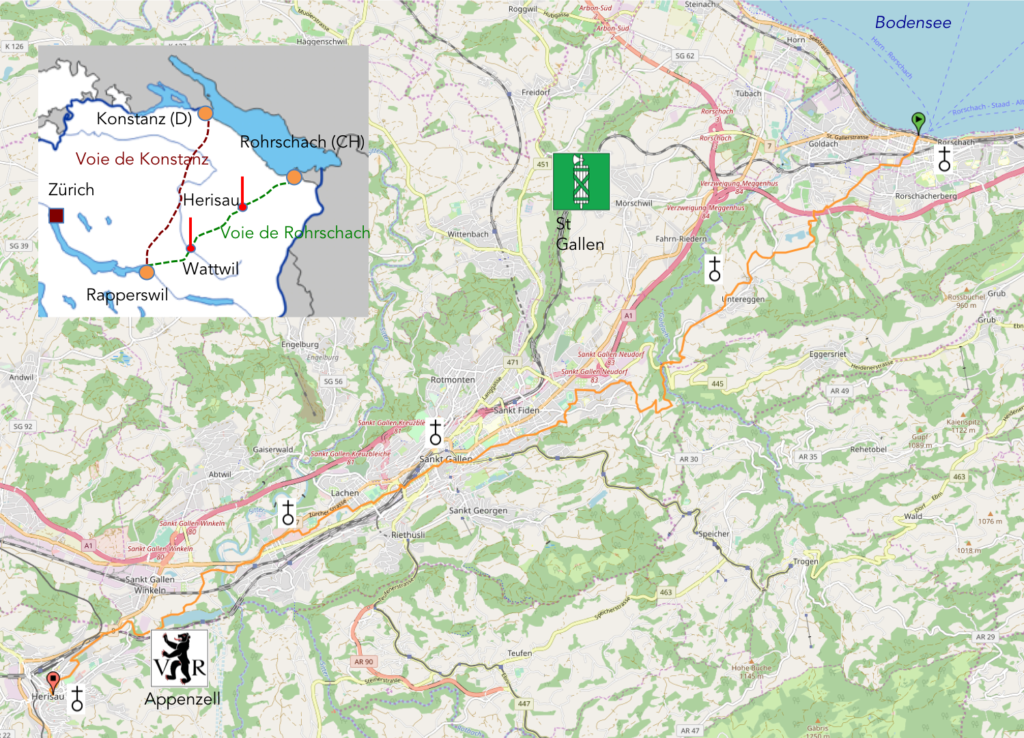 The main route of Via Jacobi 4, the Camino de Santiago in Switzerland, starts from Constance, on the shore of Konstanz Lake, the Bodensee. But you can also start from Rohrschach, a little further down the lake. Many pilgrims from Germany, Austria or Eastern countries arrive in Lindau, Germany, or Bregenz, Austria. They take the boat to reach Rohrschach. The advantage of choosing the Rorschach route over the Konstanz route is that it passes through St Gallen. However, the two routes meet at Rapperswil, on the shores of Zürich Lake, at the end of the canton of St Gallen. In the first stages in Switzerland, the Via Jacobi crosses the canton of St Gallen right through, with a small transition in the canton of Appenzell, landlocked in the canton of St Gallen. 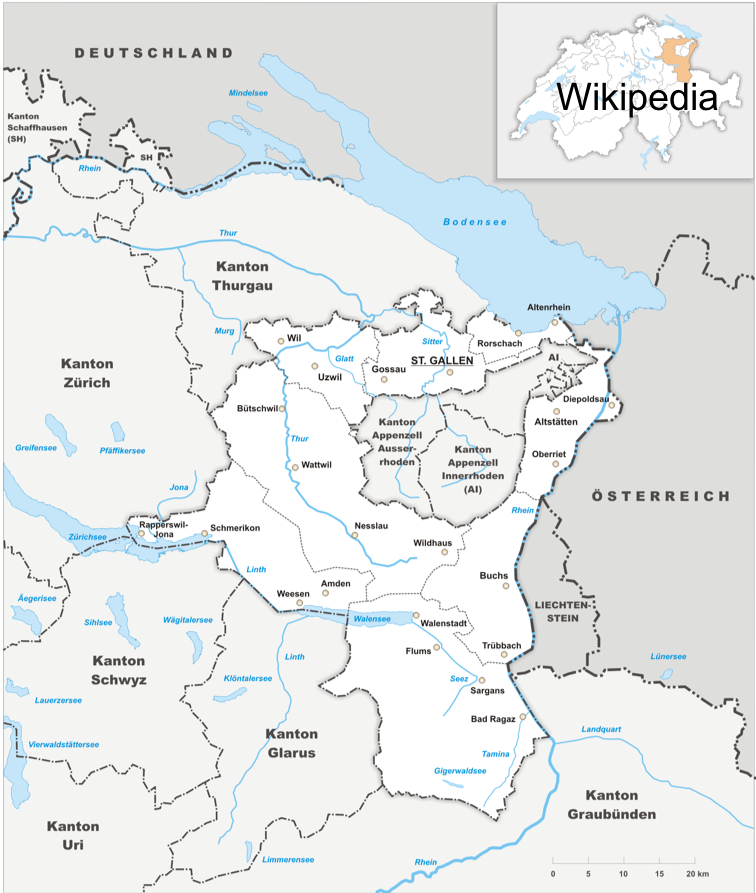 Today’s stage runs through the magnificent city center of St Gallen and its collegiate church, listed in the UNESCO heritage register. Another legendary point to note, before arriving in St Gall, the route crosses the St Martin Bridge (Martinsbrücke) over the deep and wild Goldbach gorges. Another turbulent region is that of the Sitter Gorge, with its impressive viaducts at the exit of Bruggen.

Difficulty of the course: The journey is divided between city and countryside, on relatively substantial but bearable slope variations (+783 meters /-426 meters). Of course, the Camino de Santiago in Switzerland avoids the high mountains and passes of the Alps. But, you walk in Switzerland, a country of mountains and high hills, and rare are the stages in the plain. The first part of the route is almost constant uphill to the heights of St Gallen. The most difficult section is near the Goldbach River, before St Gallen, with sometimes slopes greater than 25%. Thereafter, the course is without great difficulty.

Section 1: From Bodensee to the hills. 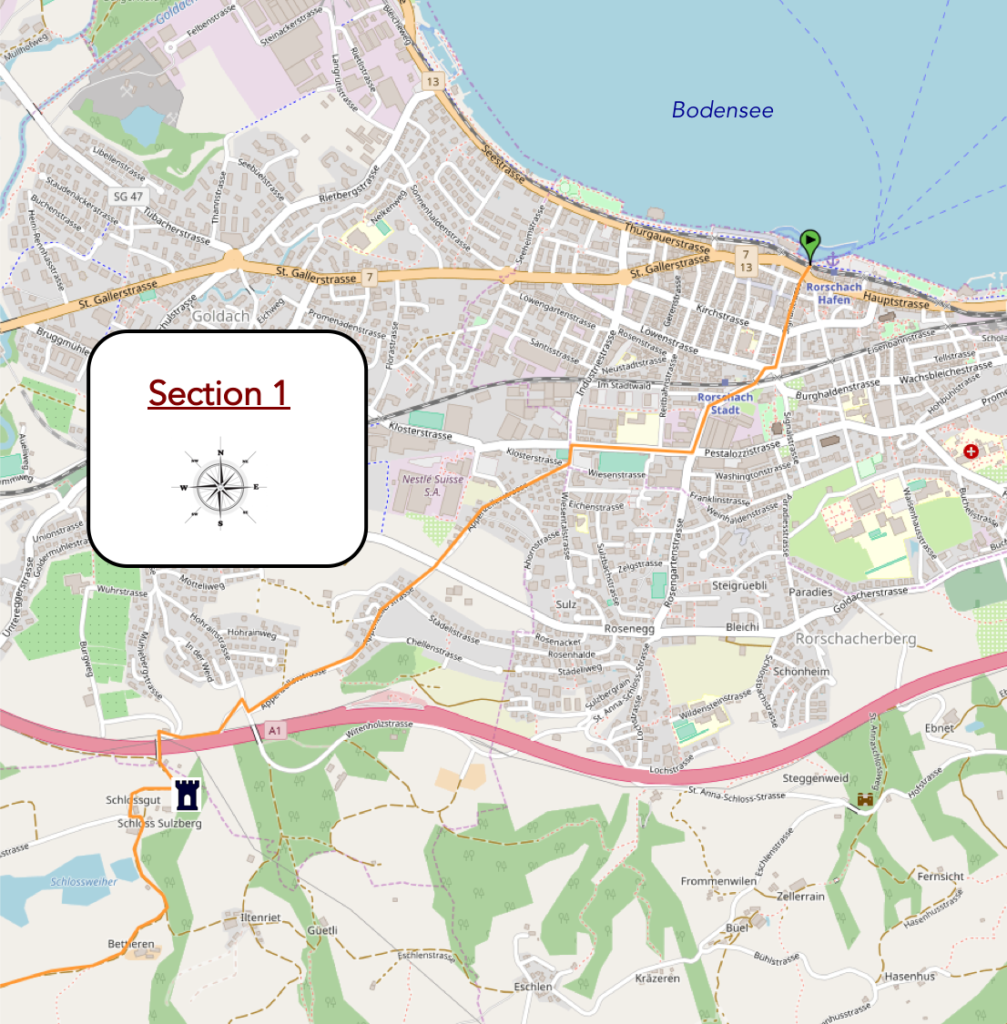 General overview of the difficulties of the route: tough climb to Sulzberg Castle, then less demanding route, even if you climb almost 200 meters in 4 kilometers. 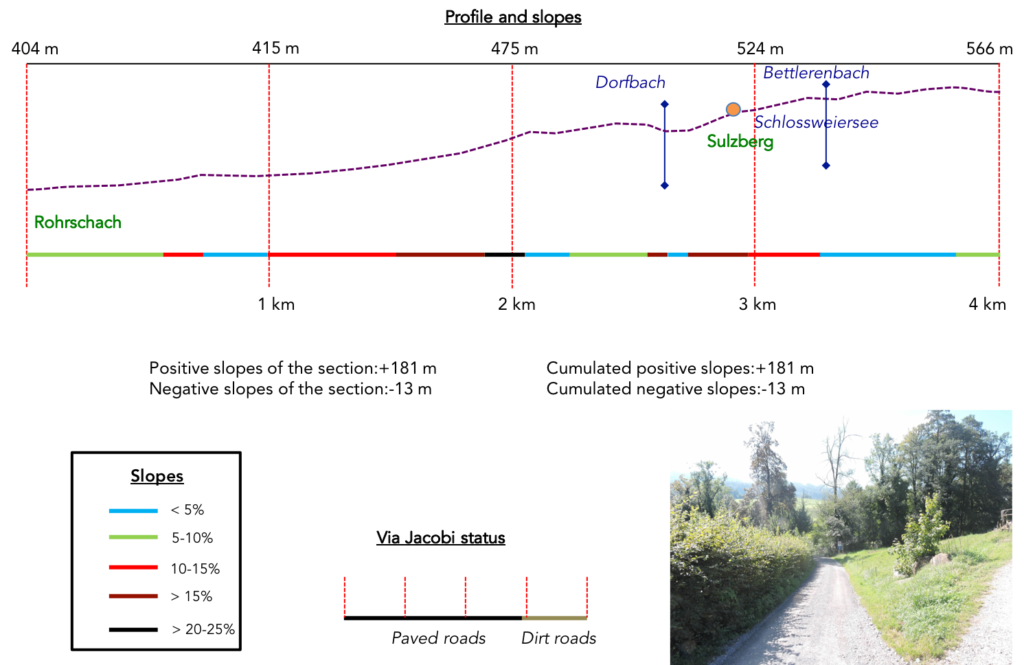 Too bad this beautiful house lost in the ivy is so close to the highway. 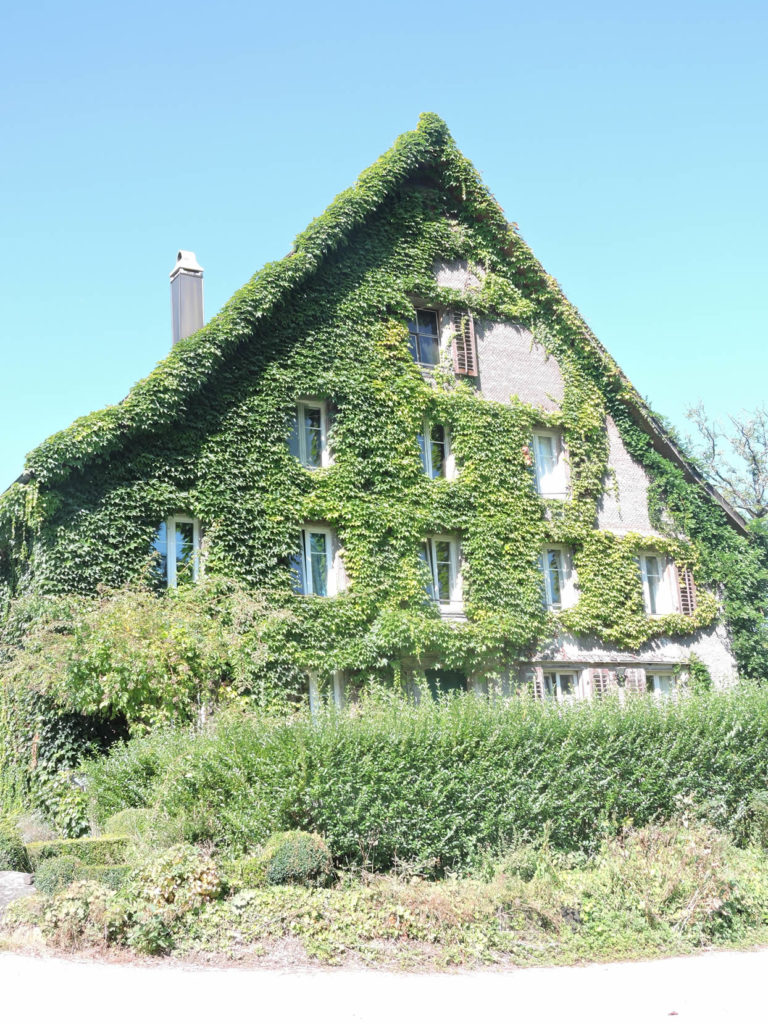 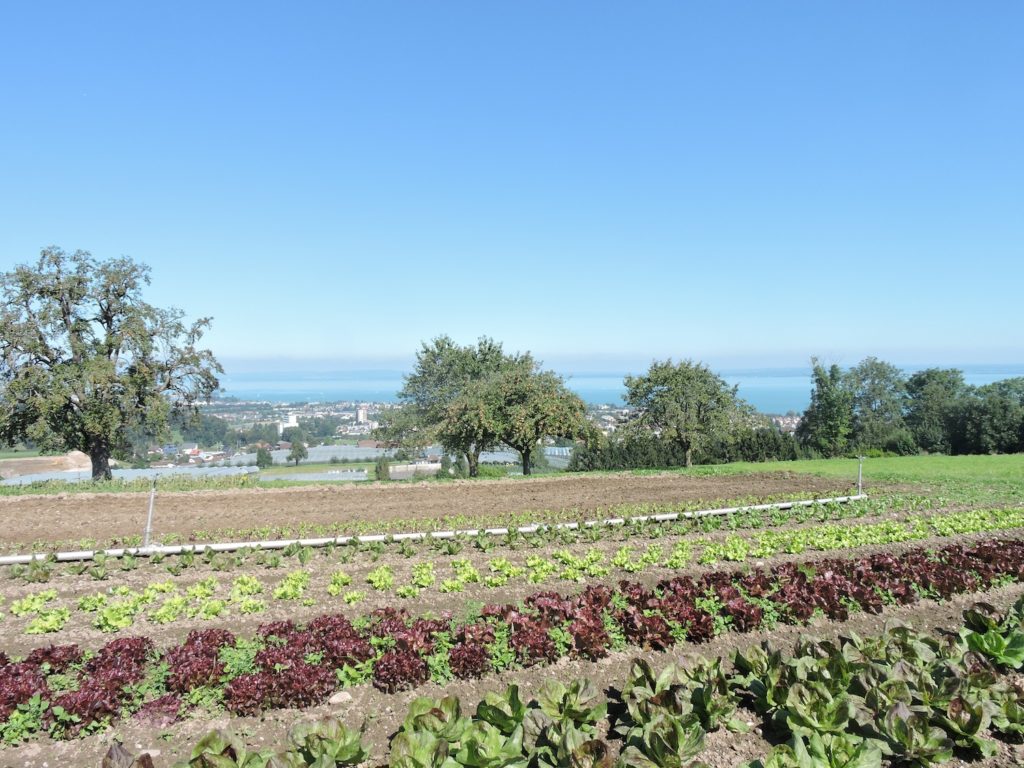 Section 2: Passing through the small villages of Untereggen to the top of the hill. 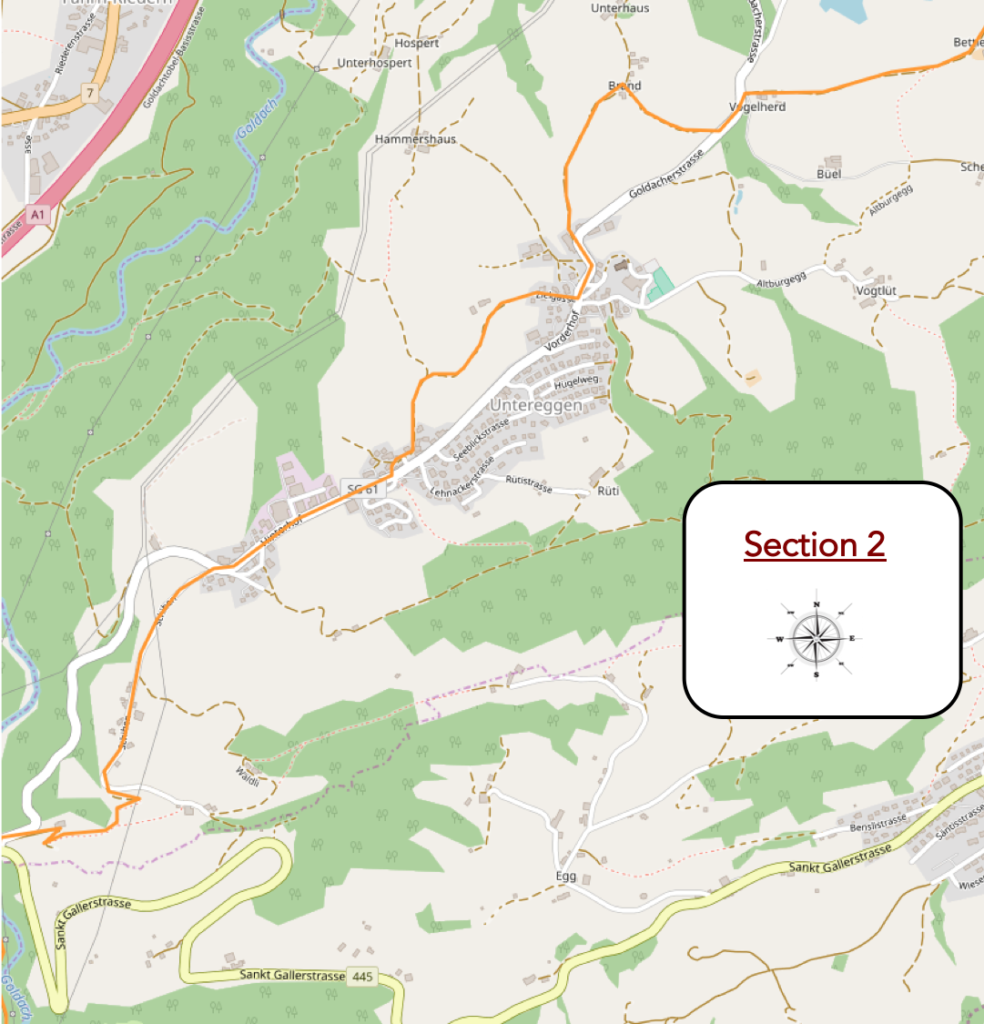 General overview of the difficulties of the route: climb a little less pronounced than before, but there are small, very steep sections, more than 15%; the steep descent from Sieben to the Goldbach Gorge can be demanding in bad weather. 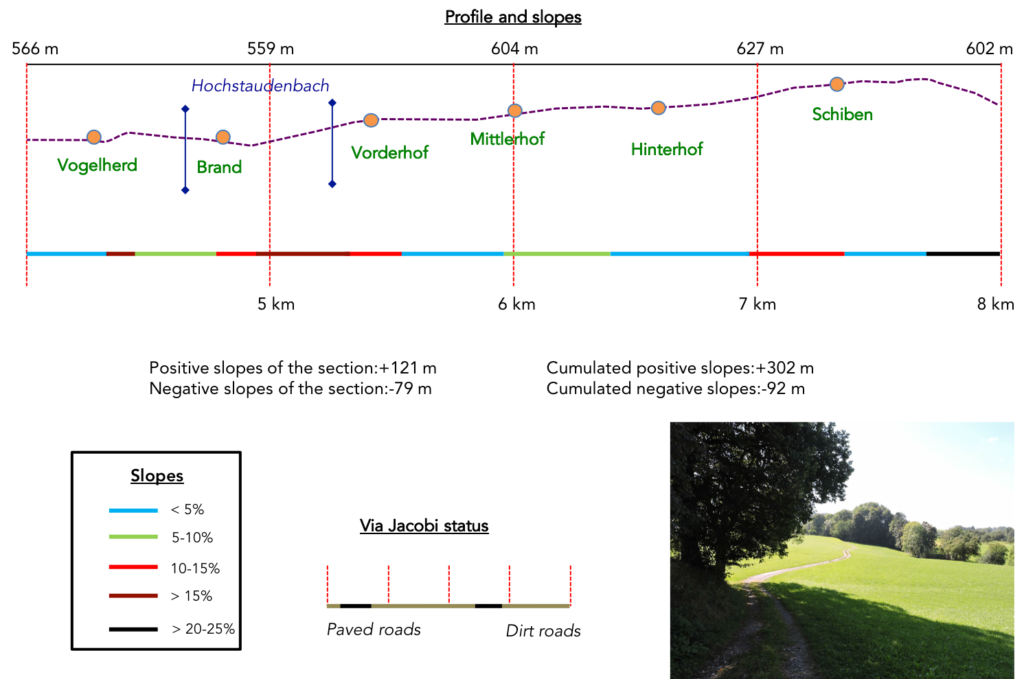 Section 3: A serious bump before descending to St Gallen. 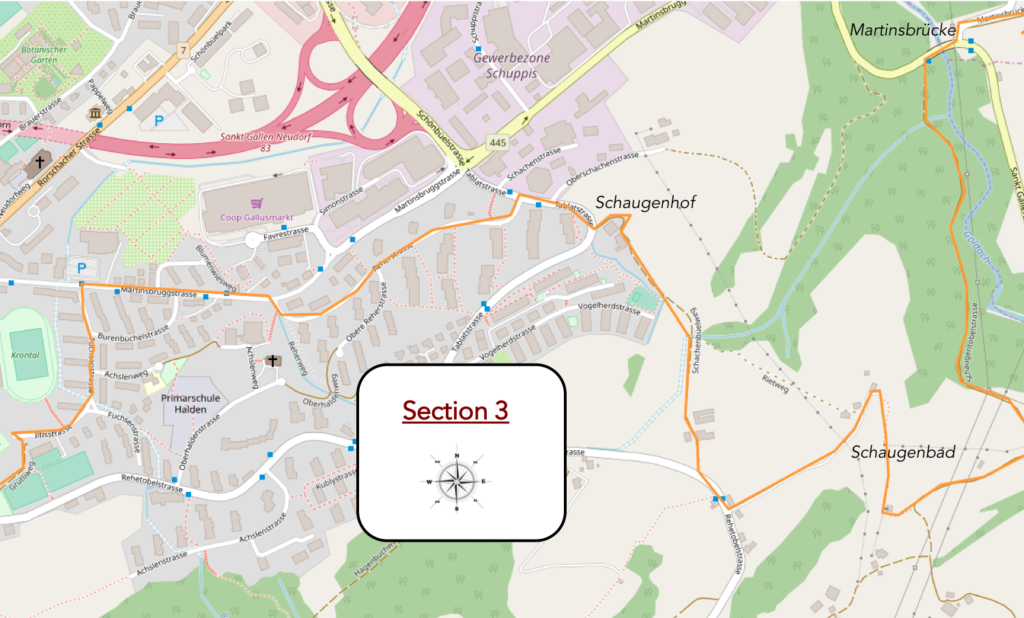 General overview of the difficulties of the route: steep climb to Schaugenhof; then regular descent in the outer districts of St Gallen. 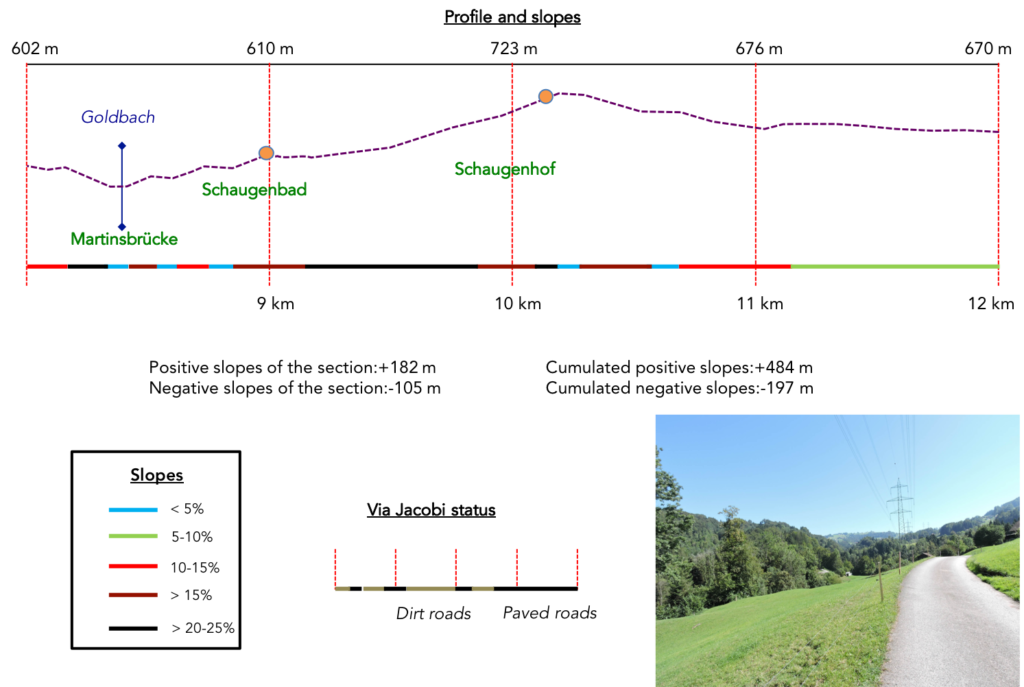 Below your gaze extends over the valley drawn by the Goldach River that you have just partially visited. 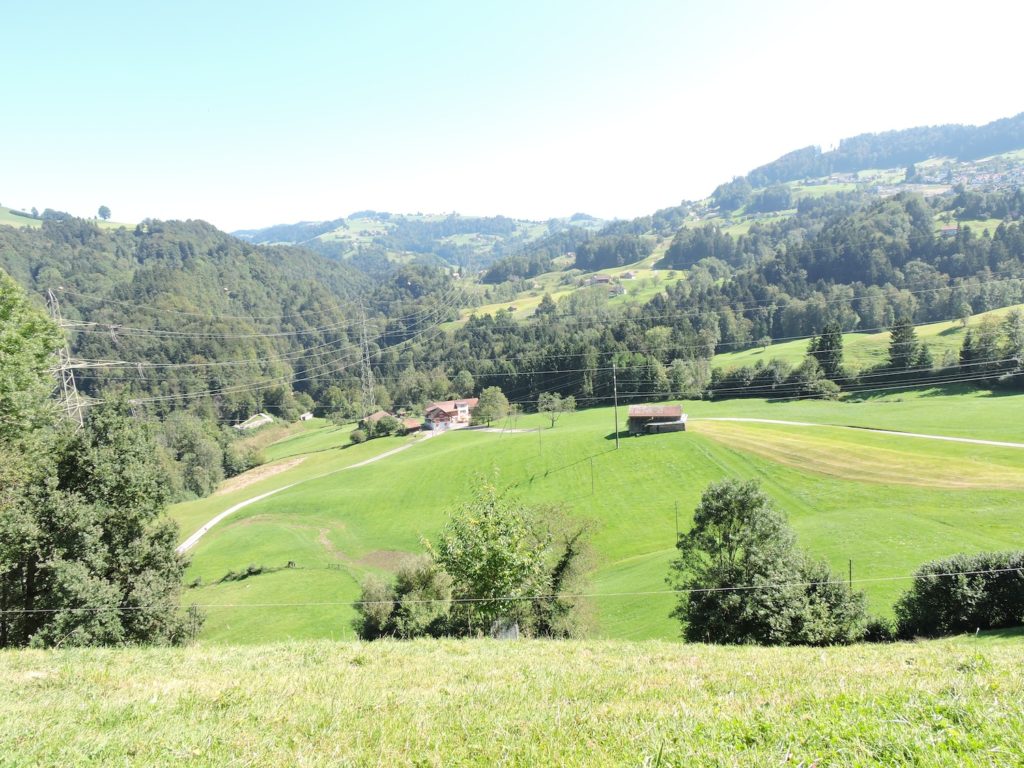 Here, the municipality has nothing against popular art. 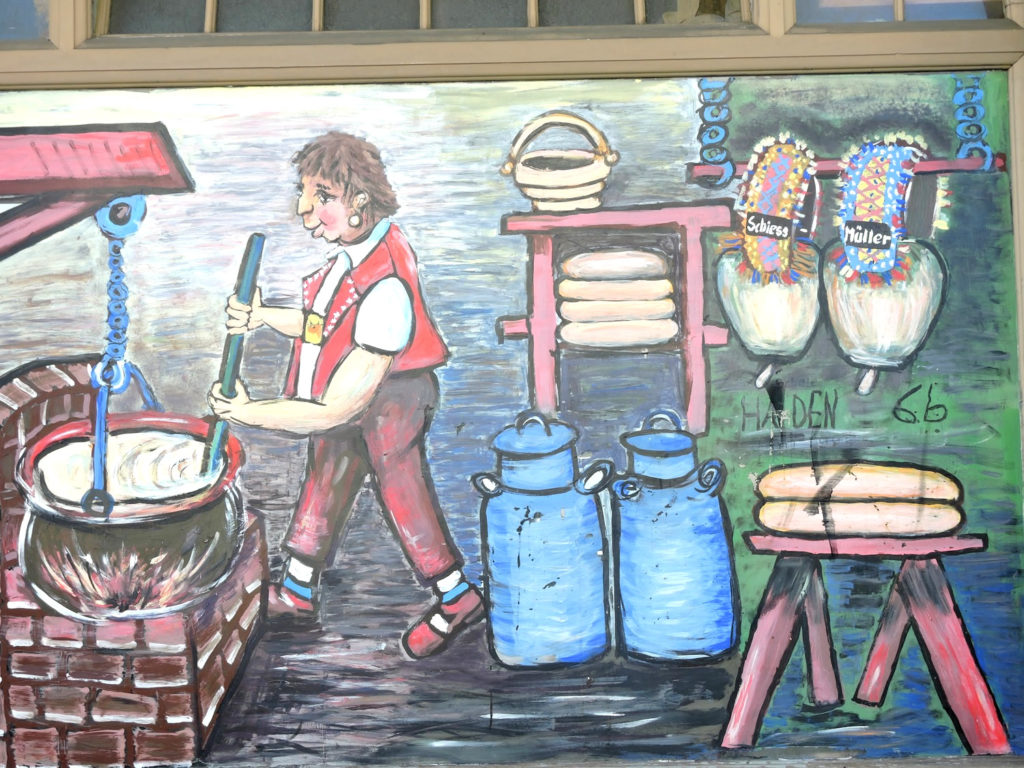 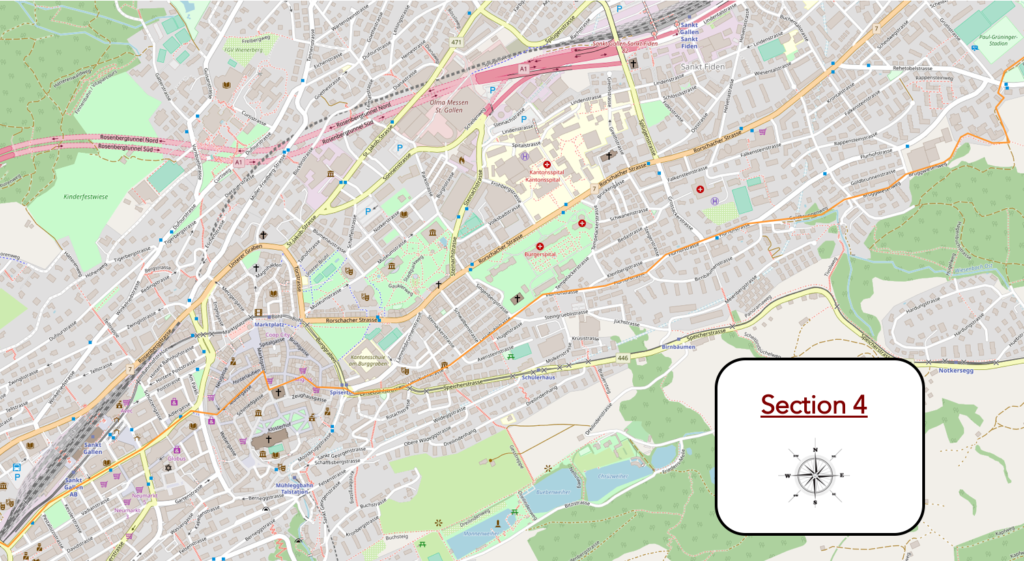 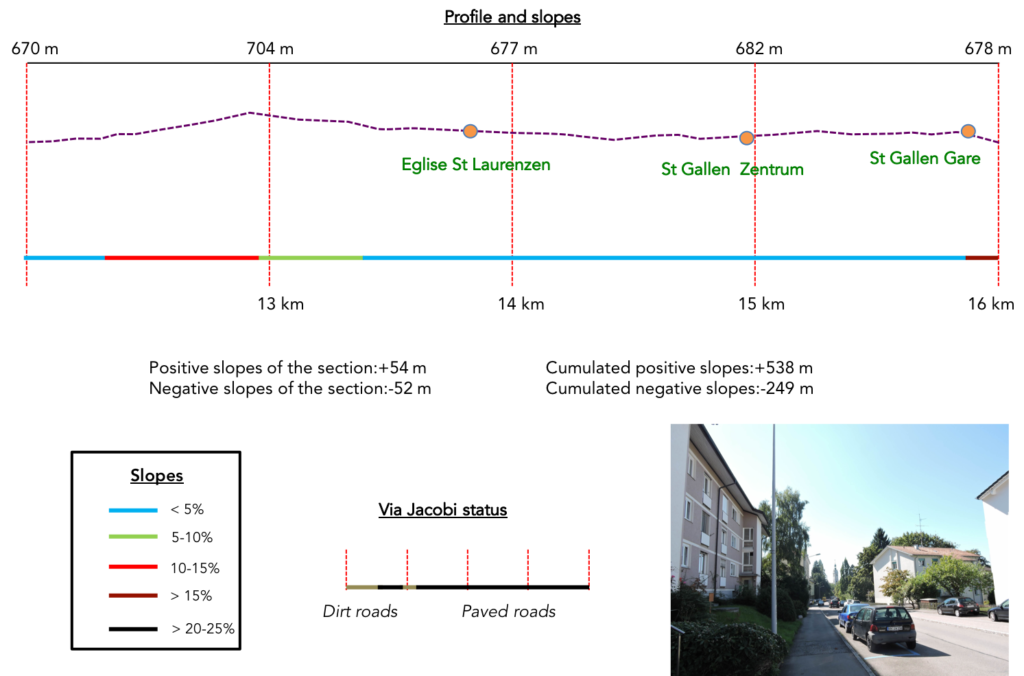 Sometimes a gem of an old home sits next to the approximate of newer homes. You can imagine that in the past, farmers had to live here on the edge of the city, and that the city has gradually eaten away at these neighborhoods and extended its tentacles without much character. 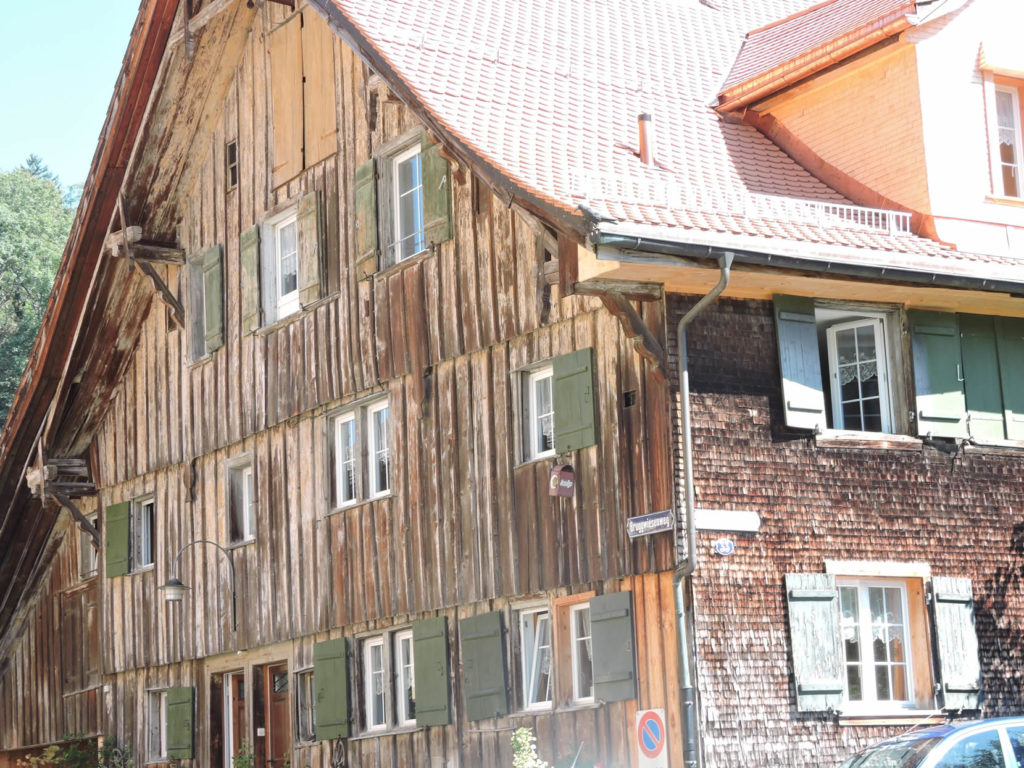 It is said that the bell tower of St Laurent’s Church offers a magnificent view of the old town. But you still have to be there in time, because the guided tours take place twice a day, at 10:00 a.m. and 3:00 p.m. 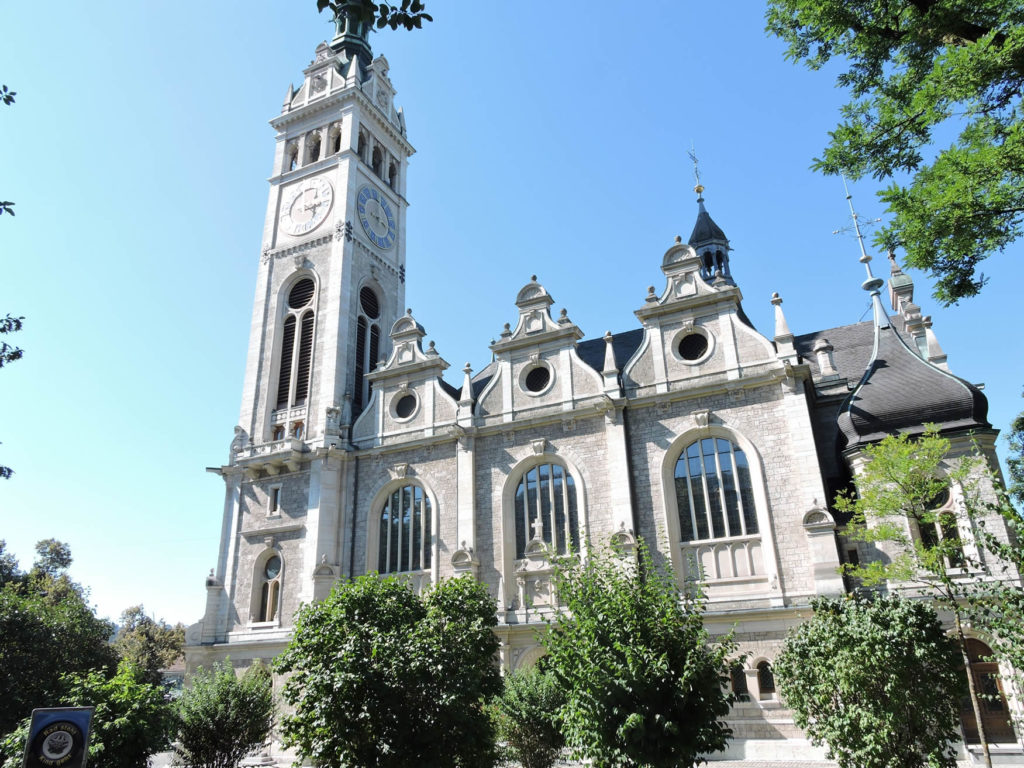 At the entrance to the library, where the camera cannot operate, it is clear that the shell of Compostela is no stranger to this exceptional place. 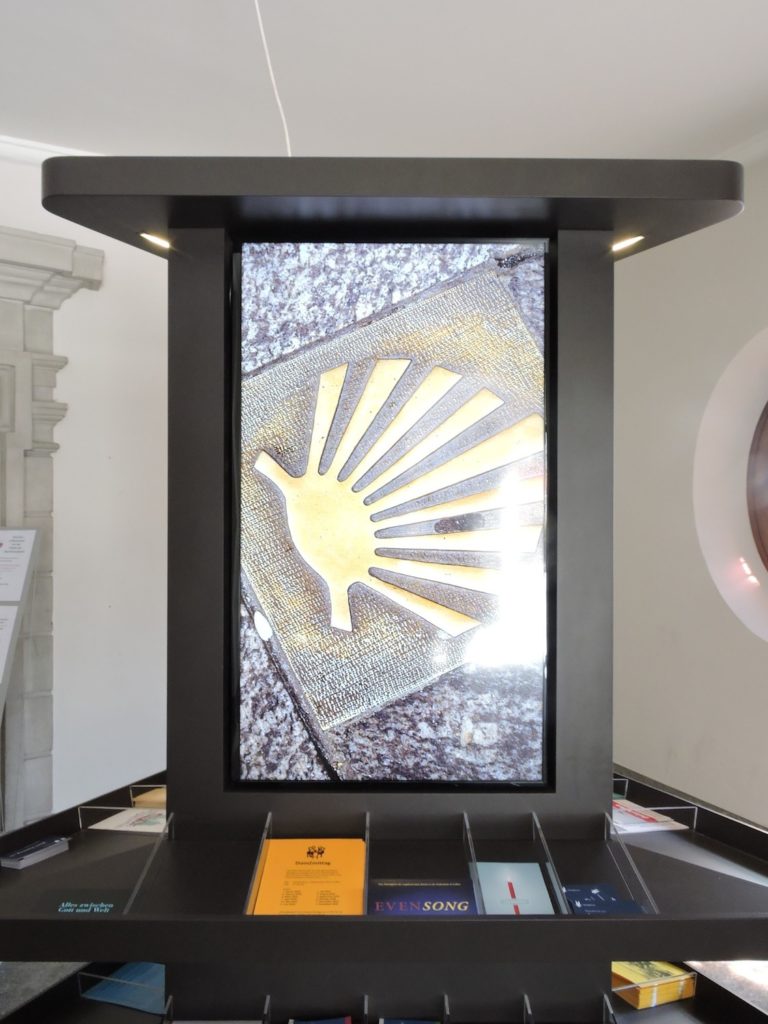 Section 5: From St Gallen to Bruggen, passing through the suburbs. 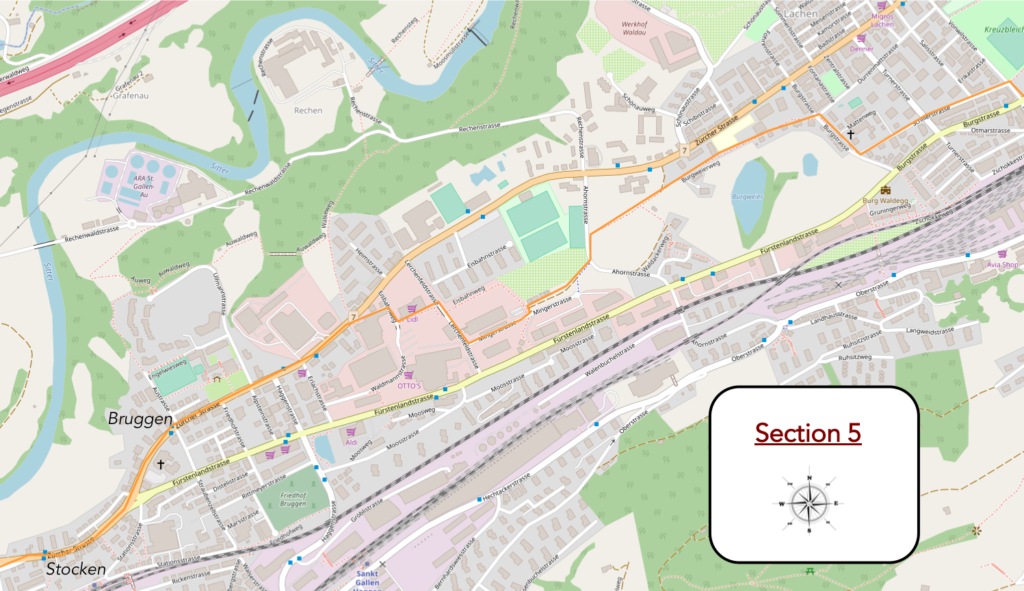 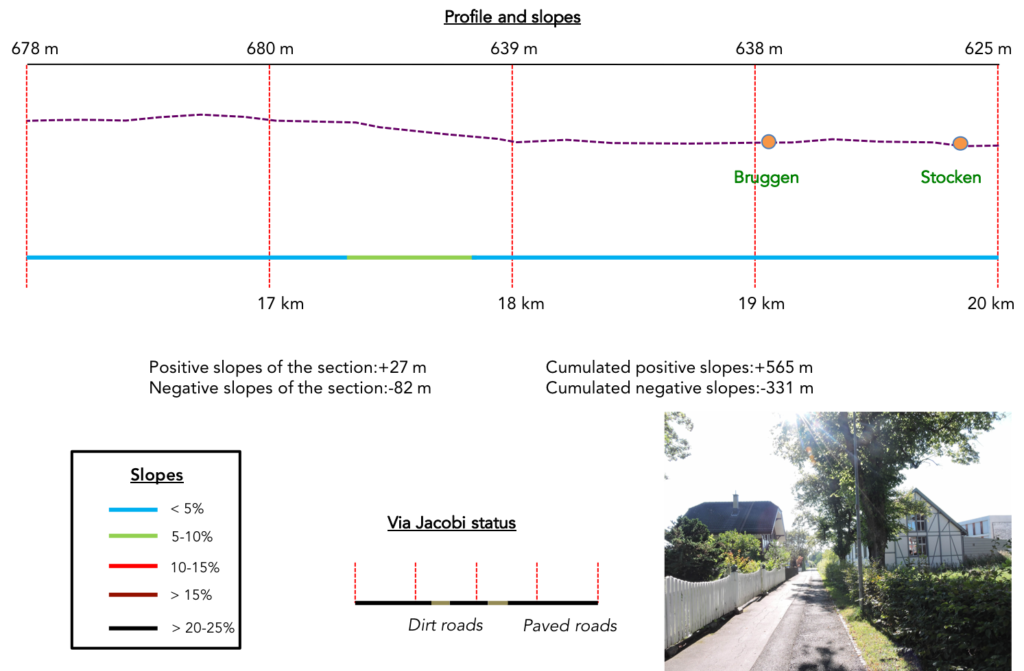 Section 6: On the way to the canton of Appenzell Outer Rhodes. 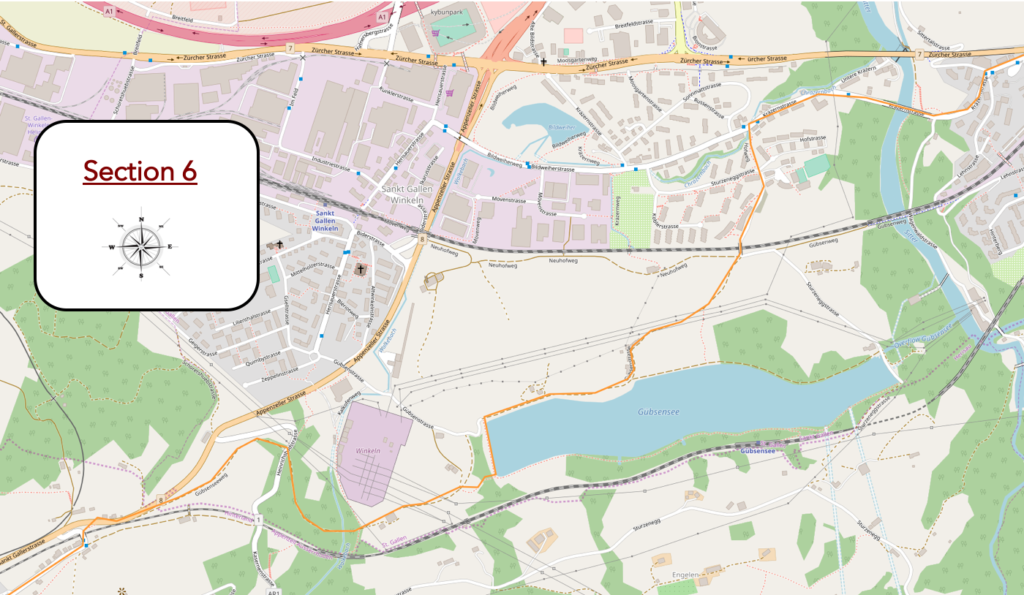 General overview of the difficulties of the route: fairly regular climb, with small embankments at the exit of Kräzern and Gübsensee Lake. 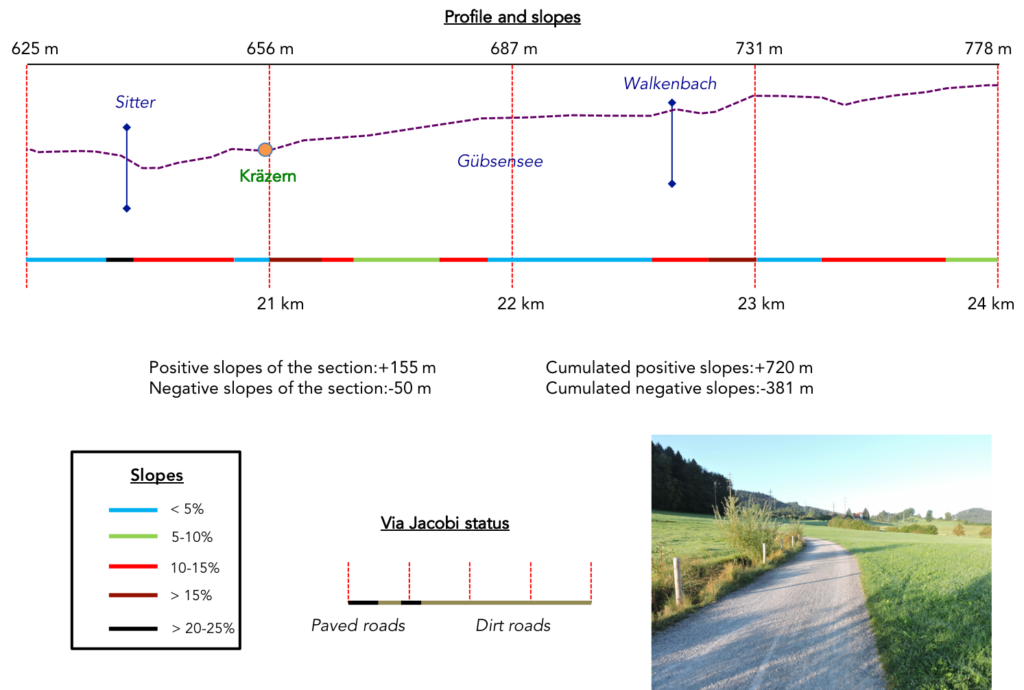 In the undergrowth, the pathway narrows under the straight oaks and beech trees. 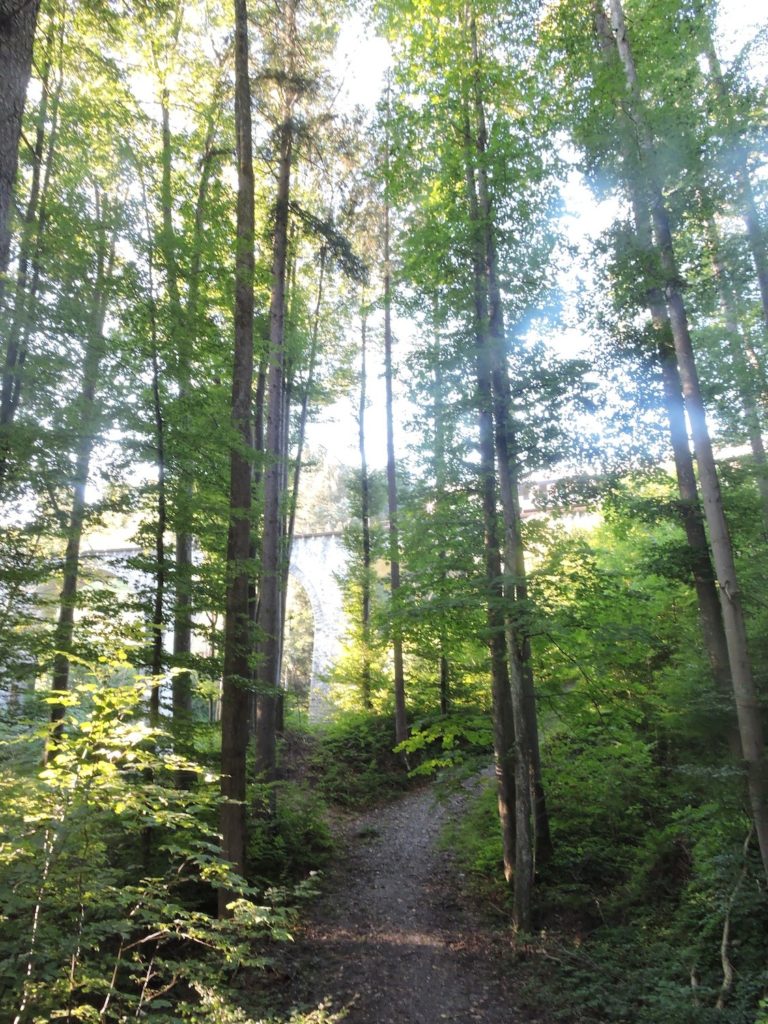 Section 7: An excursion to Herisau, capital of the canton of Appenzell Outer Rhodes. 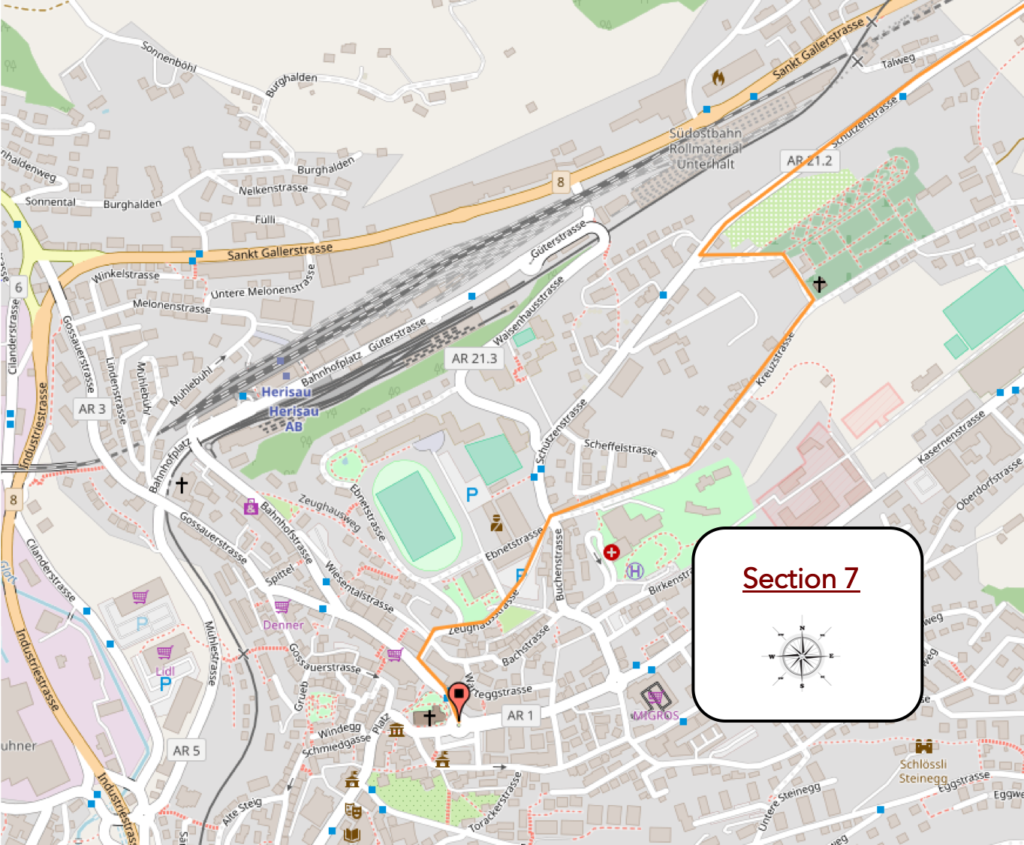 General overview of the difficulties of the route: tough climb to the Kreuzkapelle, then sometimes steep descent towards the city. 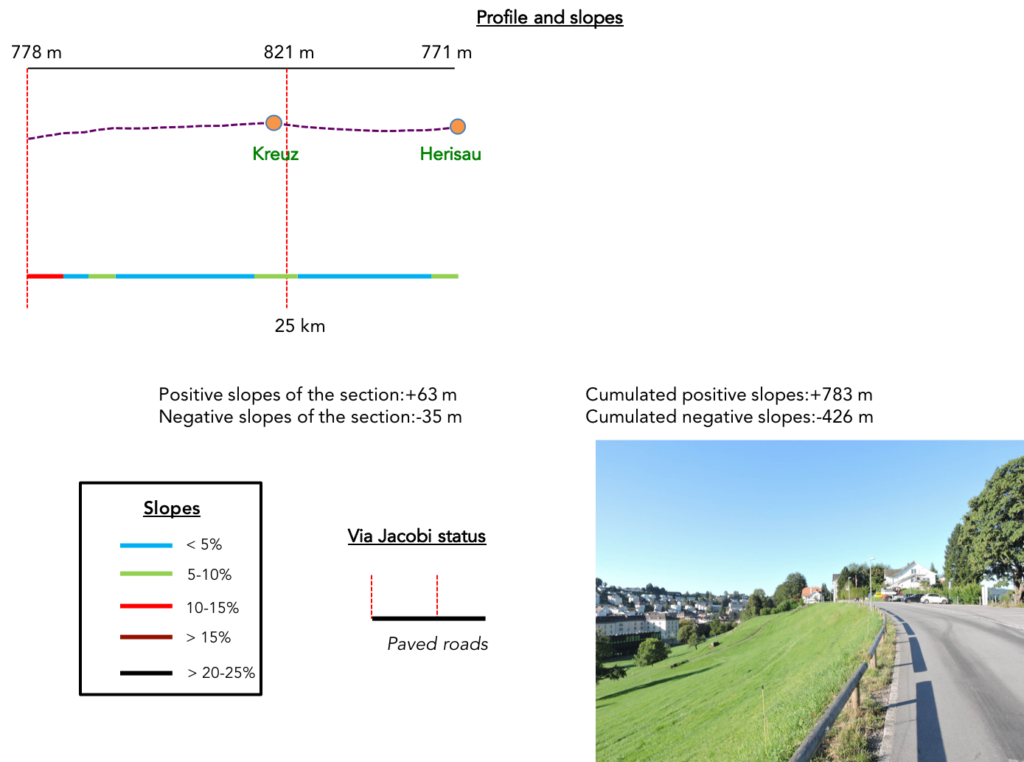 Next stage: Stage 2: From Herisau to Wattwil

Back to the menu