The alternative for Einsiedeln 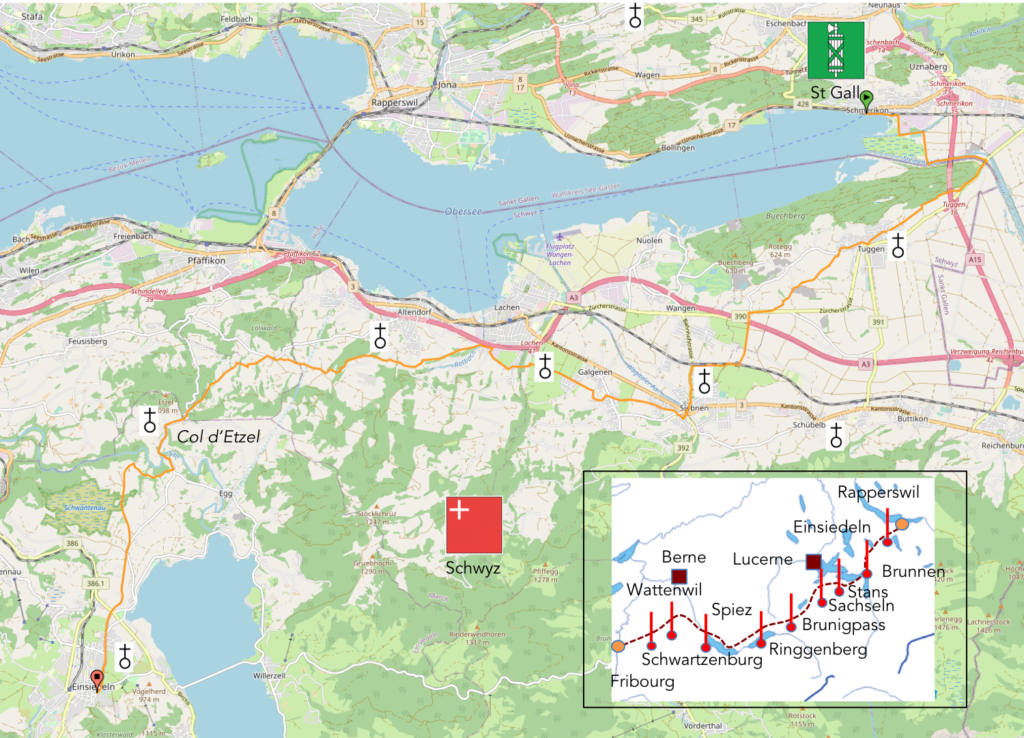 As we said in the previous stage, when the route arrives at Neuhaus, you enter a more populated region, where the villages almost touch each other until Rapperswil. The density is not so high, but the Rapperswil basin is quite populated, given the proximity to Zürich. A good solution is to forget the route that runs to Rapperswil, the route that many pilgrims follow, and slope down to Zürich Lake. But here in Schmerikon you have another possibility. You can decide not to go to Rapperswil and go directly to Einsiedeln. In fact, the Via Jacobi 4 does not pass through Rapperswil, contrary to what many people think.

The stage is long, 30 kilometers of walking. It has two very distinct phases. The first part takes place mainly in the plain, along fairly inhabited towns. This is where the A3 motorway passes, which goes from Zürich to Graubünden. The second part is one of the most beautiful routes and panoramas of the Camino de Santiago in Switzerland, in the mountain pastures and forests overlooking the lake. It is often steep, but so beautiful.

Difficulty of the course: Slope variations (+790 meters/-298 meters) are quite marked, but the stage is long. In fact, the elevation gain to climb to the Etzel pass is a little higher than climbing from Rapperswil, because there is a small bump beyond Tuggen. At the start, except for the Tuggen bump, the route is easy for nearly 16 kilometers, until you reach Hüsteten. From there, to the Etzel Pass, it is a long climb of more than 7 kilometers, with nearly 500 meters of climbing. Beyond the pass, the route descends a little, but climbs to reach the highest point of 930 meters, at Hinterhorben. From there, the descent is problem-free to Einsiedeln.

In this stage, the tar clearly dominates. Too bad for such a beautiful course:

Section 1: Along canals and rivers. 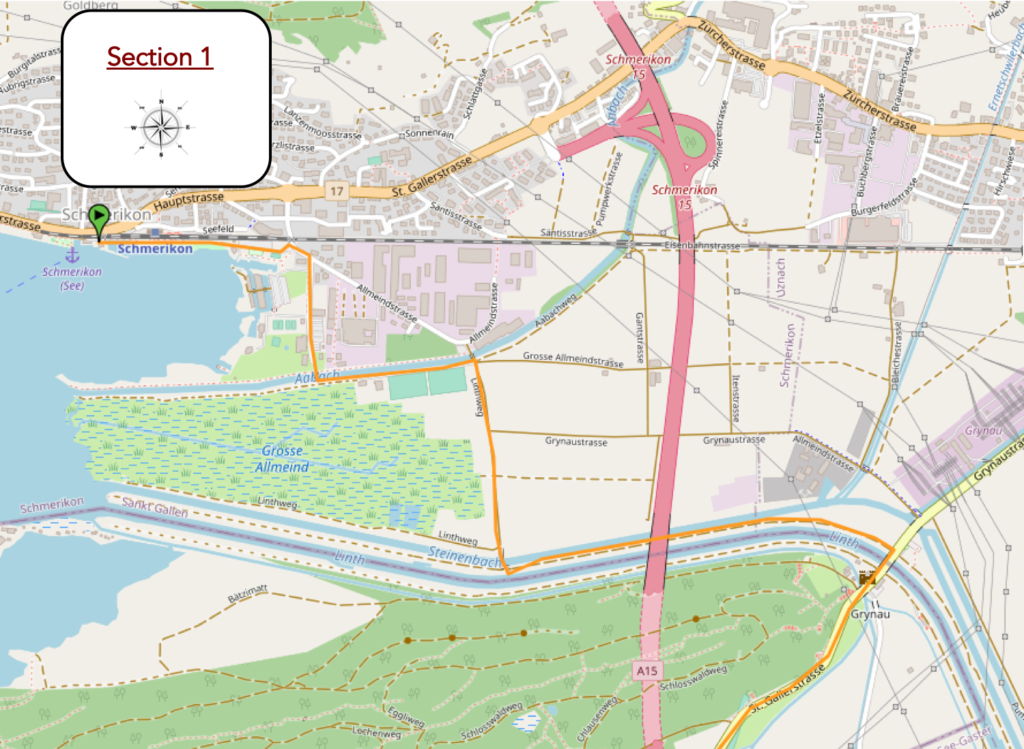 Section 2: A small bump, just to warm up. 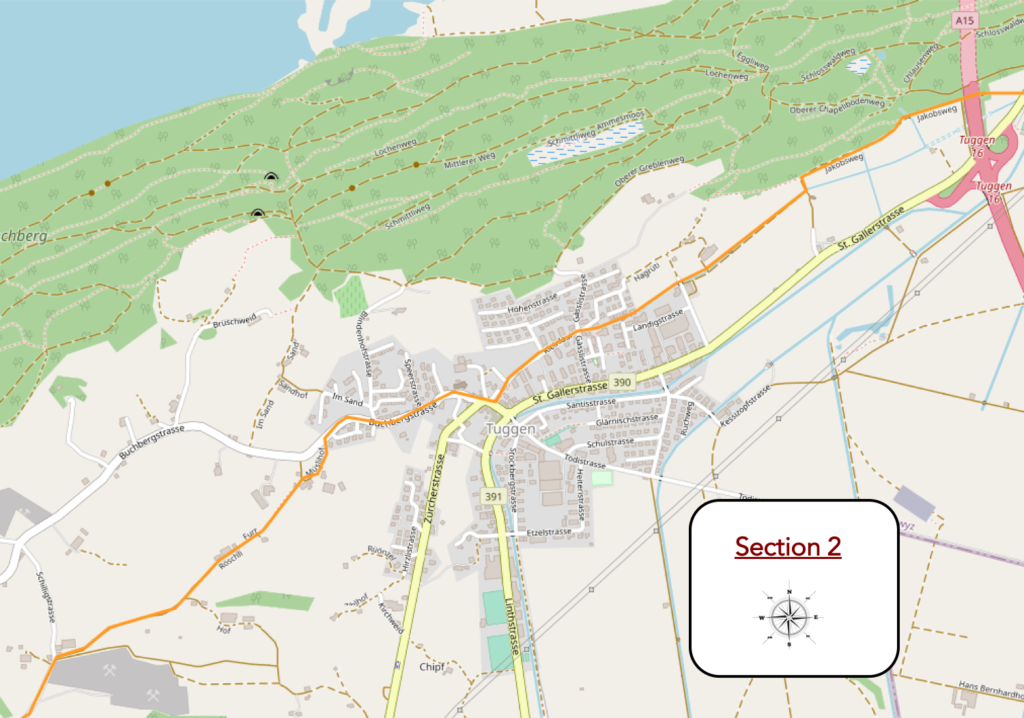 General overview of the difficulties of the route: flat, then climb without major problem.

At a place called Schillig, the road begins its descent towards the plain. 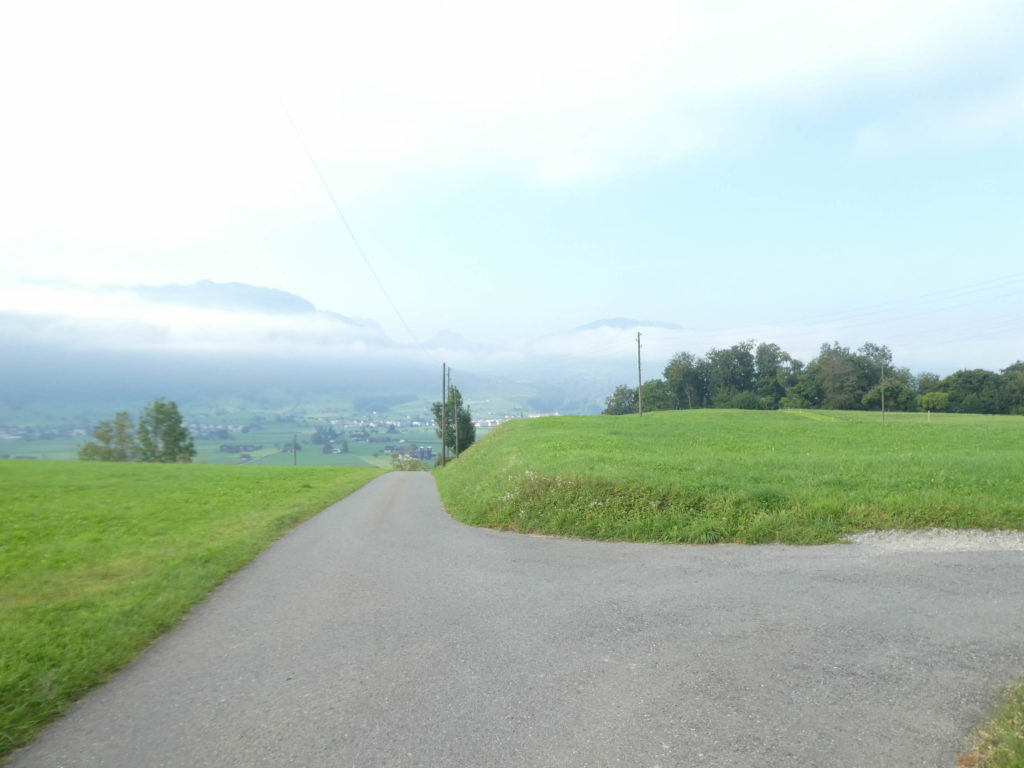 Section 3: A long crossing of the plain towards Siebnen. 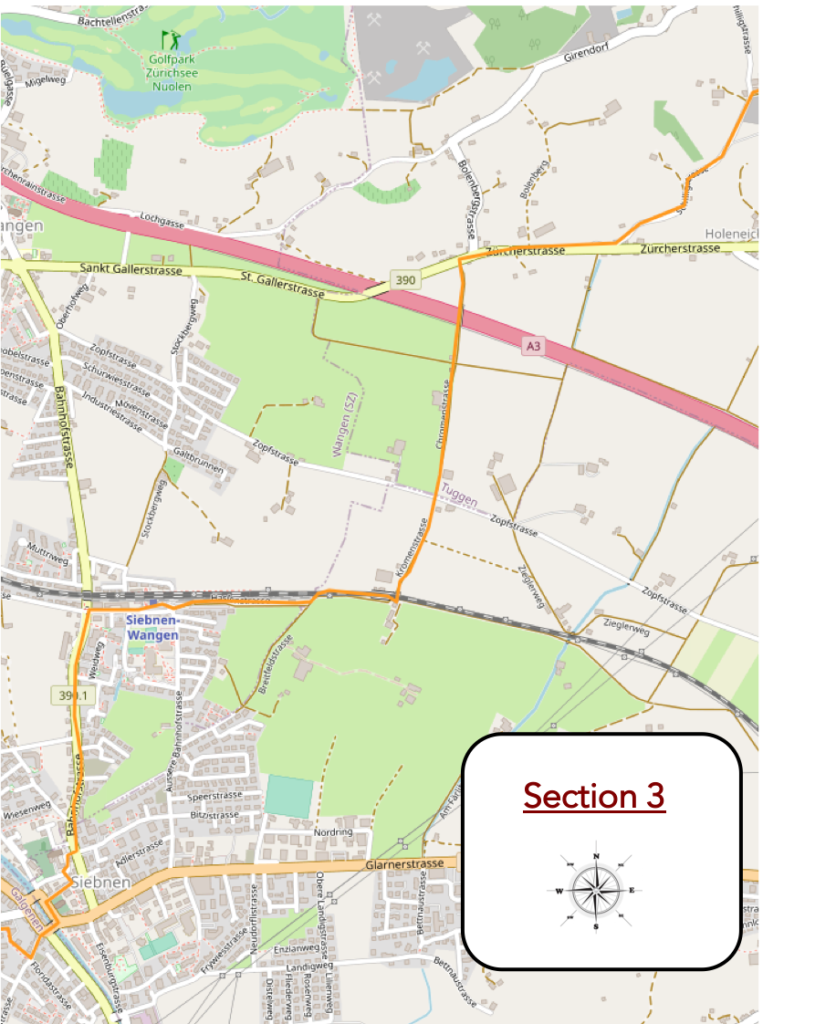 Up there on the hill an old house with decrepit shingles, of which we cannot say if it is still alive… 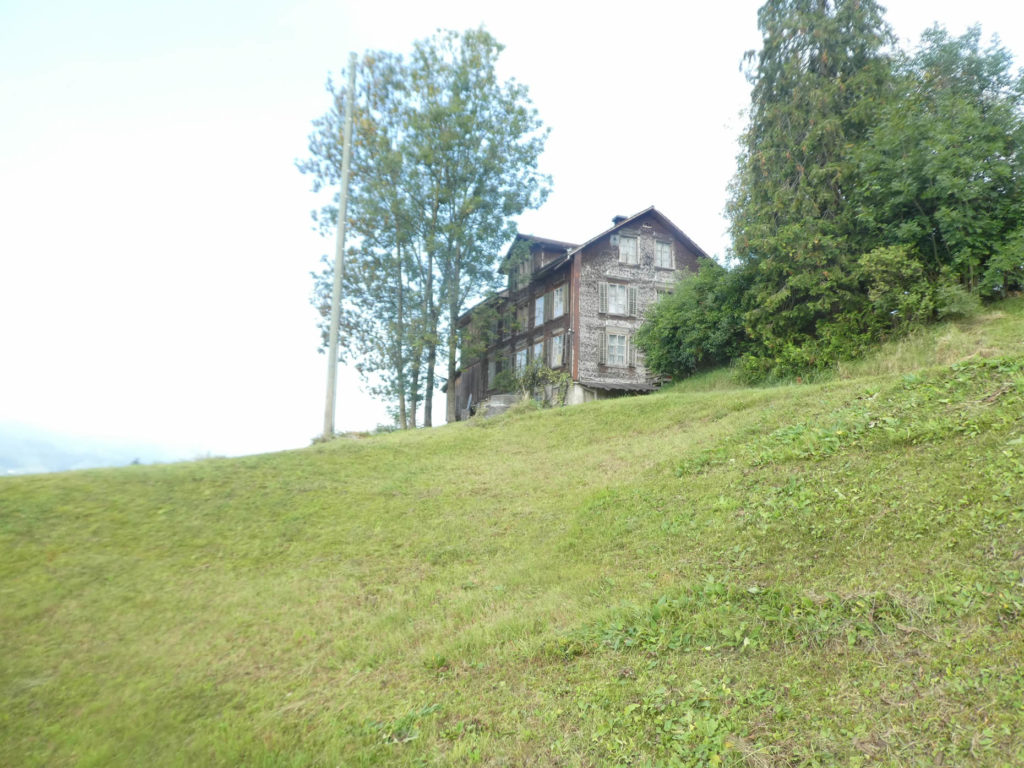 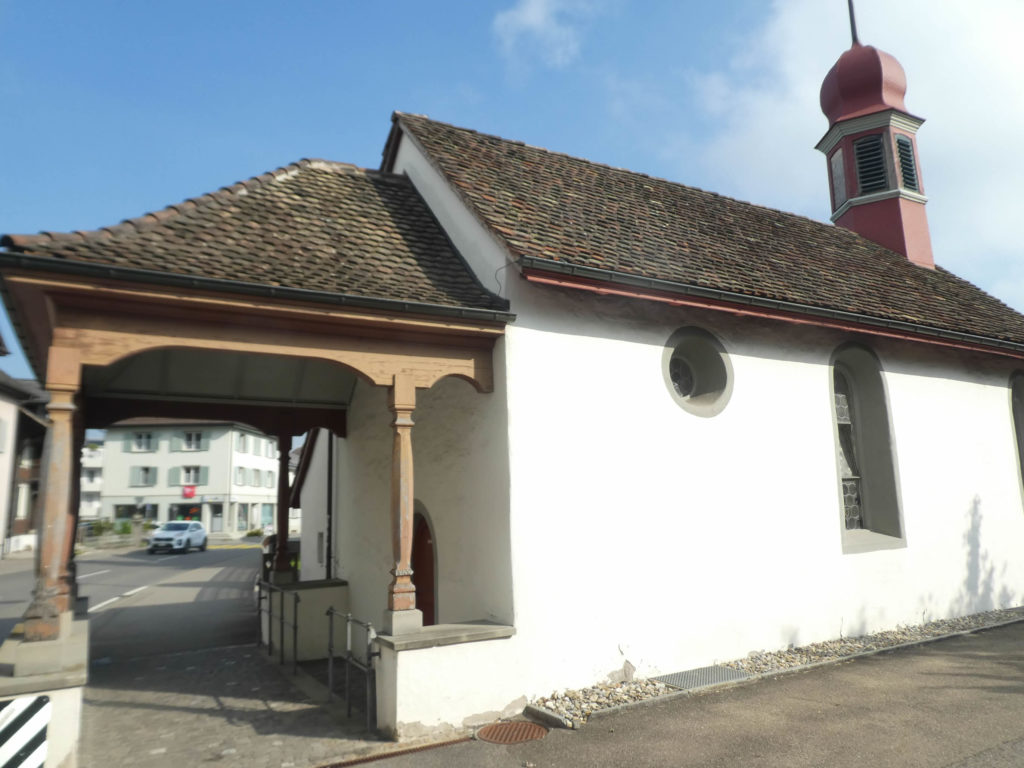 Section 4: From one borough to another. 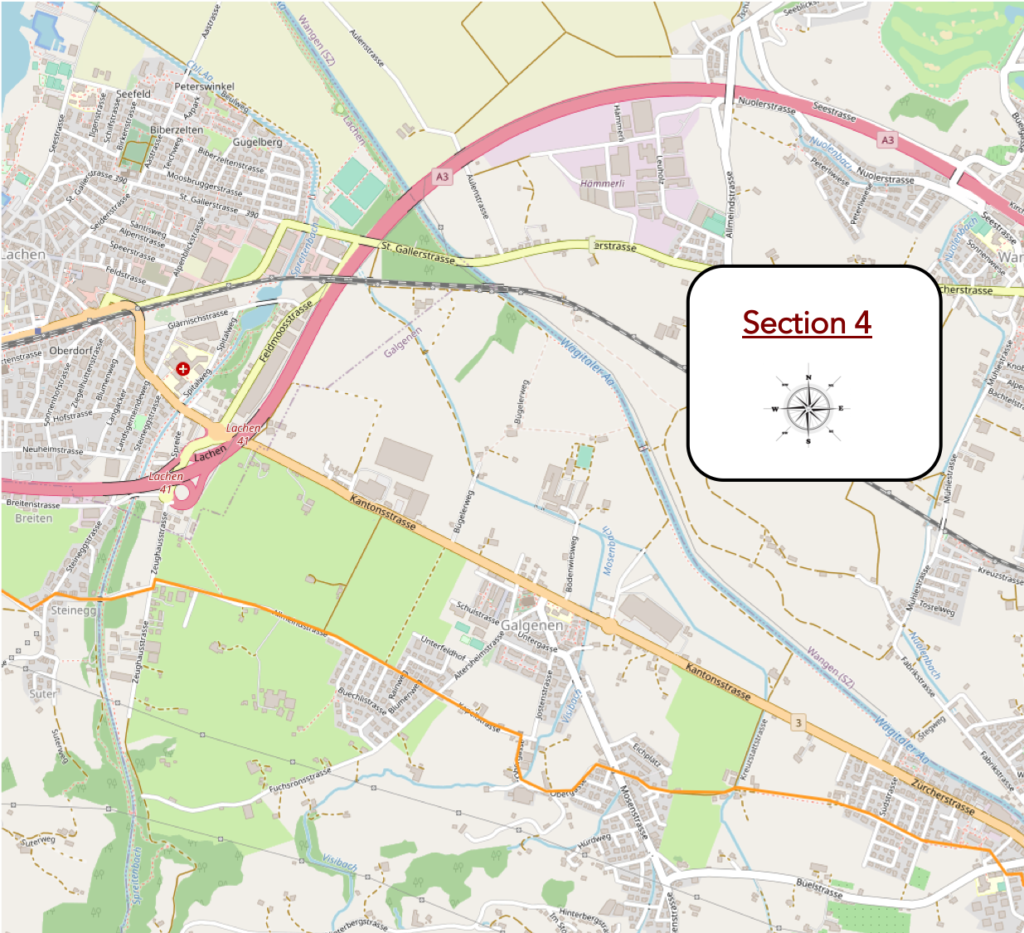 Is the reputation of a so-called primitive canton still valid? Not only Swiss Germans live and work here. 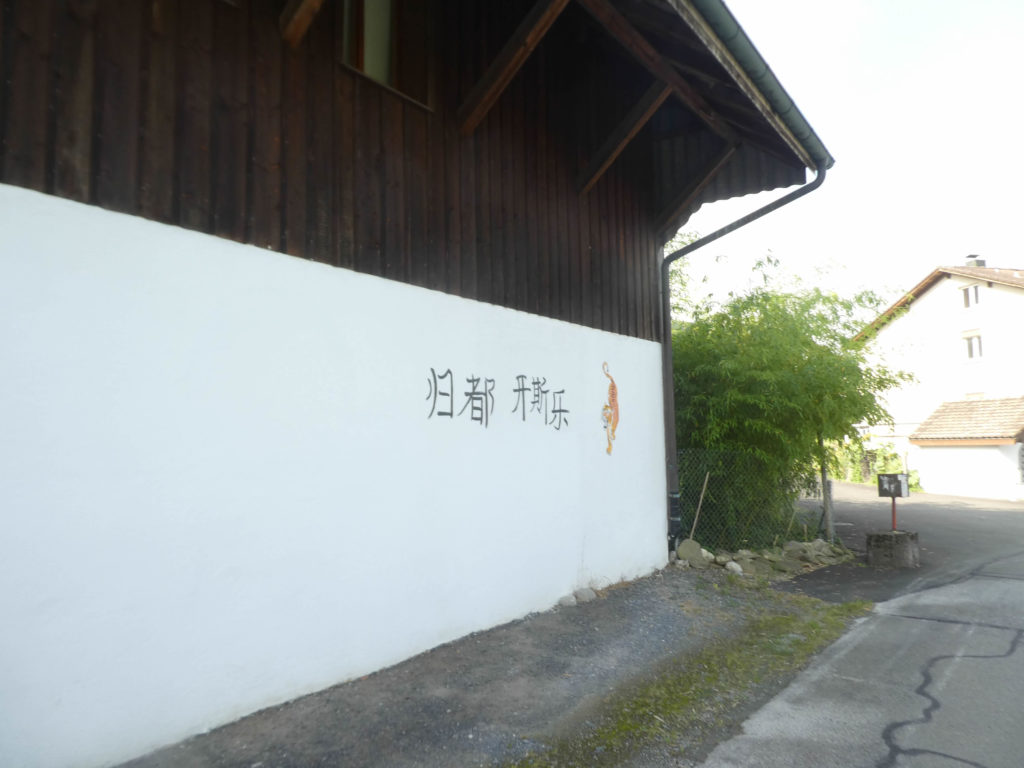 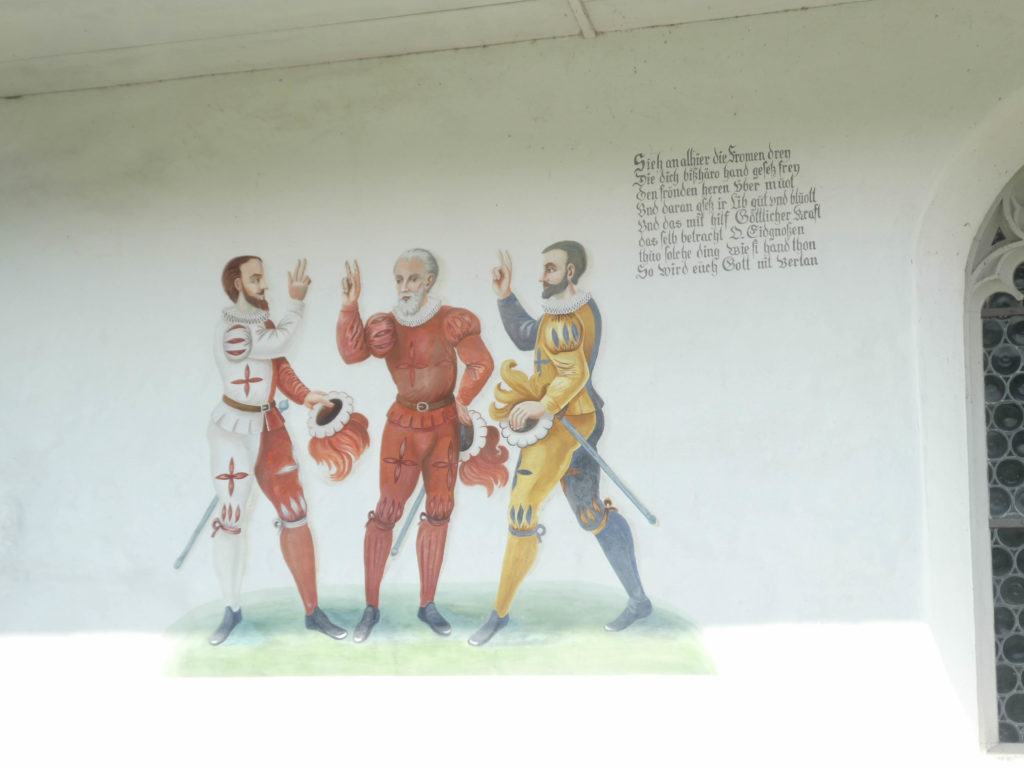 Section 5: A long climb to the Etzel Pass. 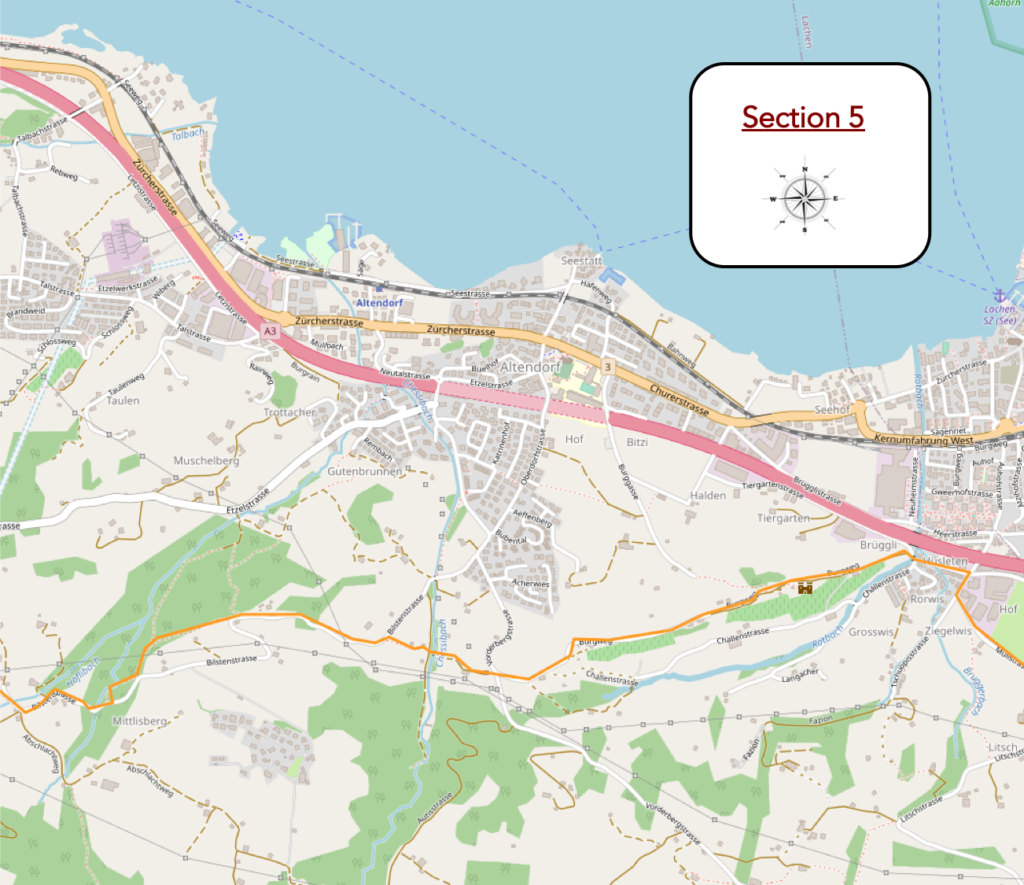 General overview of the difficulties of the route: the holidays are over. Climbing starts.

From the hill, some pilgrims will no doubt regret not having taken a few more steps to the edge of the lake to visit the Lindt chocolate factory, one of the jewels of Switzerland chocolate. 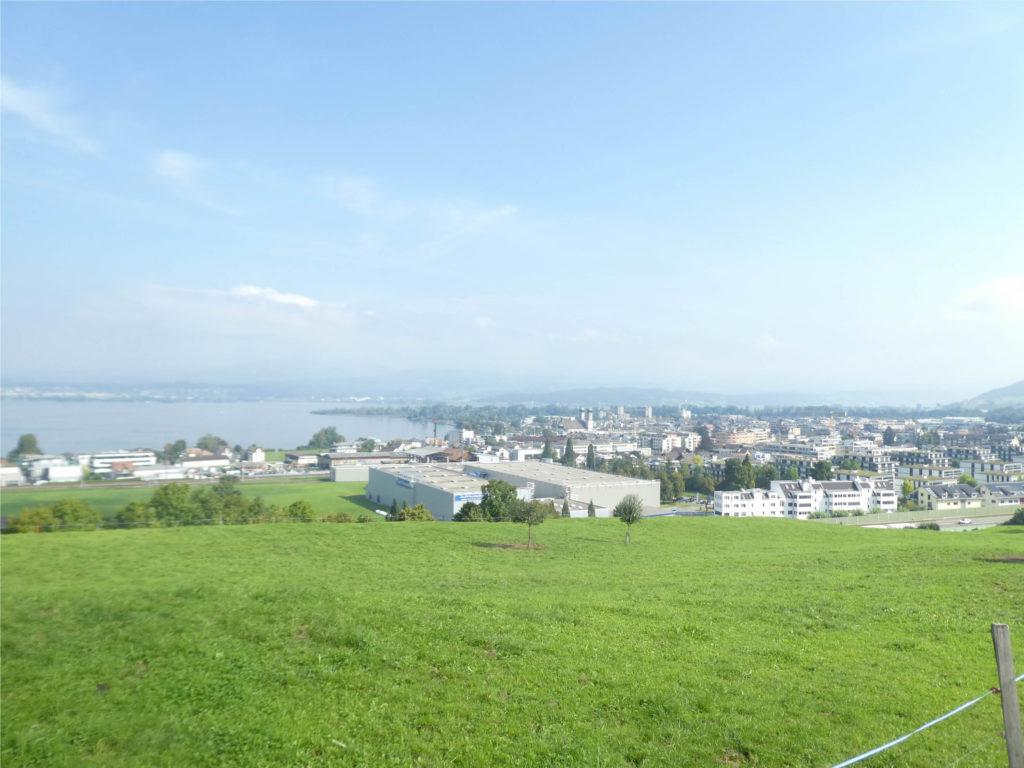 It must be said that from here the view of the upper lake of Zürich is remarkable. You can see the two banks, those of Schwyz and St Gallen, with Rapperswil in the background. 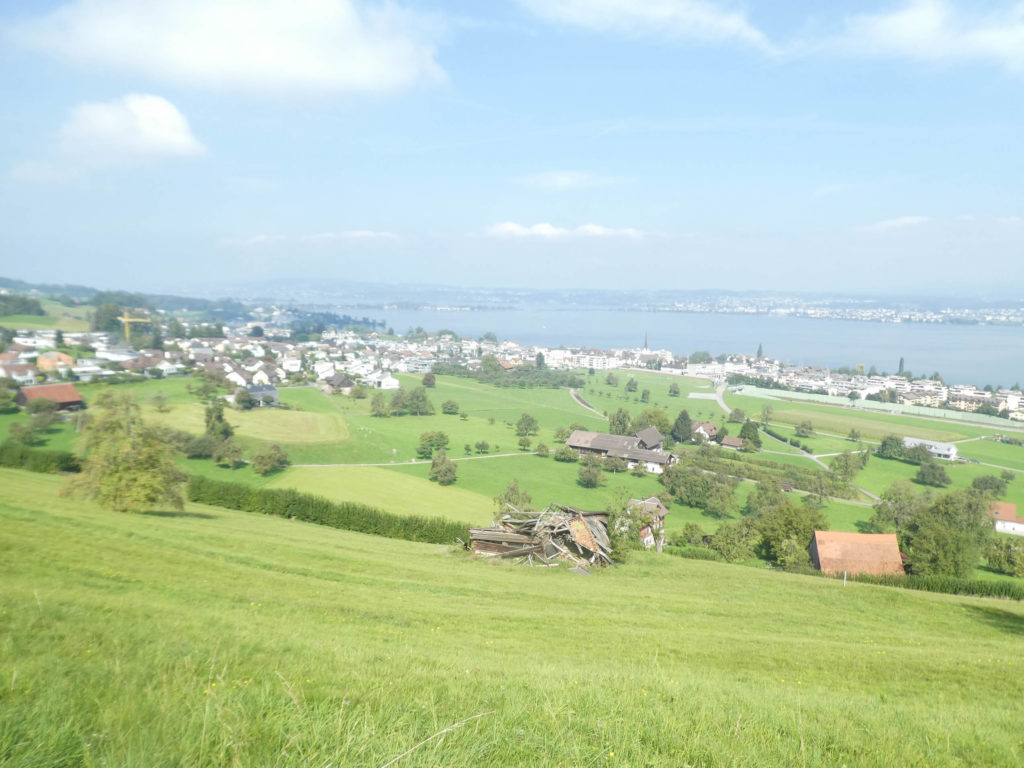 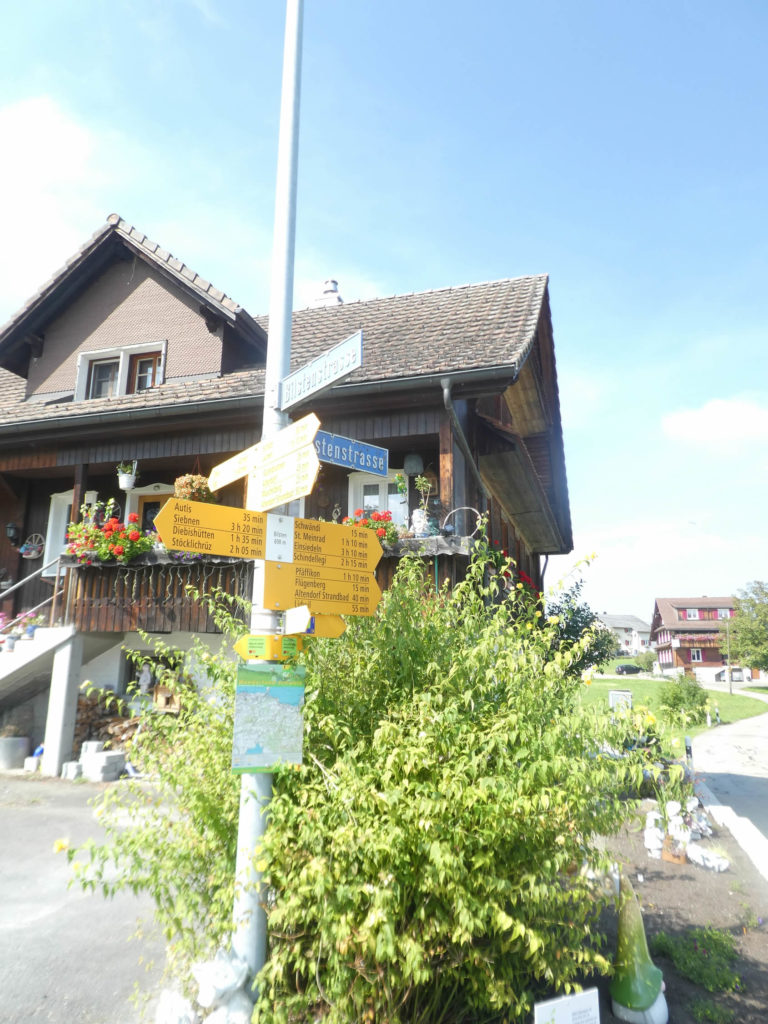 Section 6: Up there is the Etzel Pass. 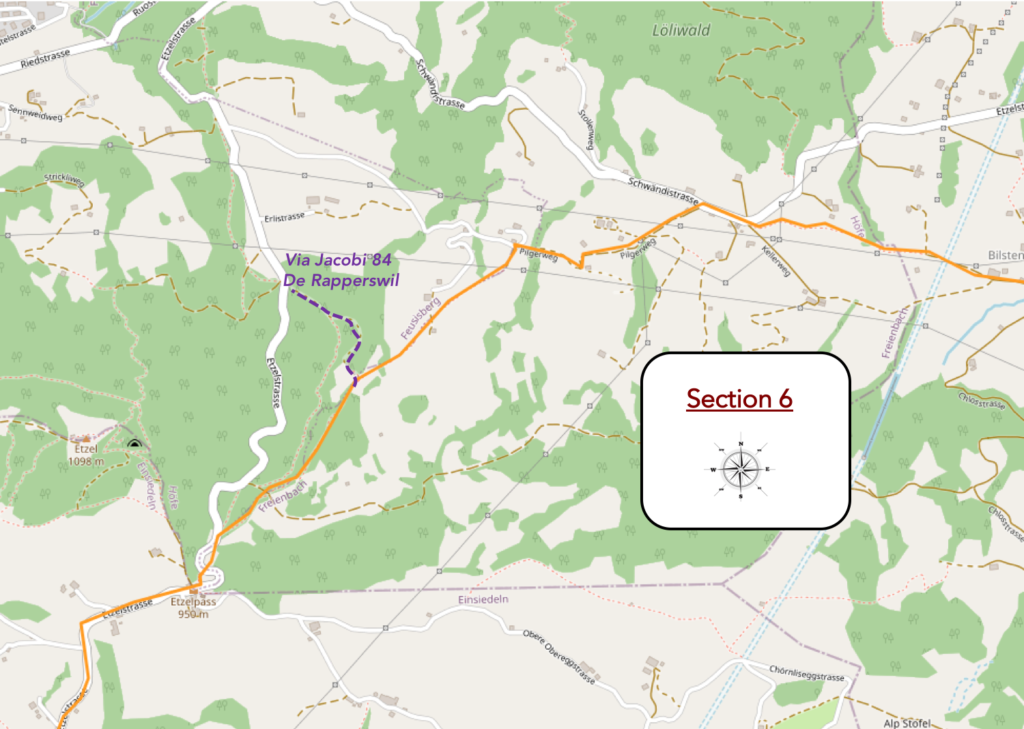 General overview of the difficulties of the route: demanding slopes in perspective.