Between lake and canyons, under eternal snow 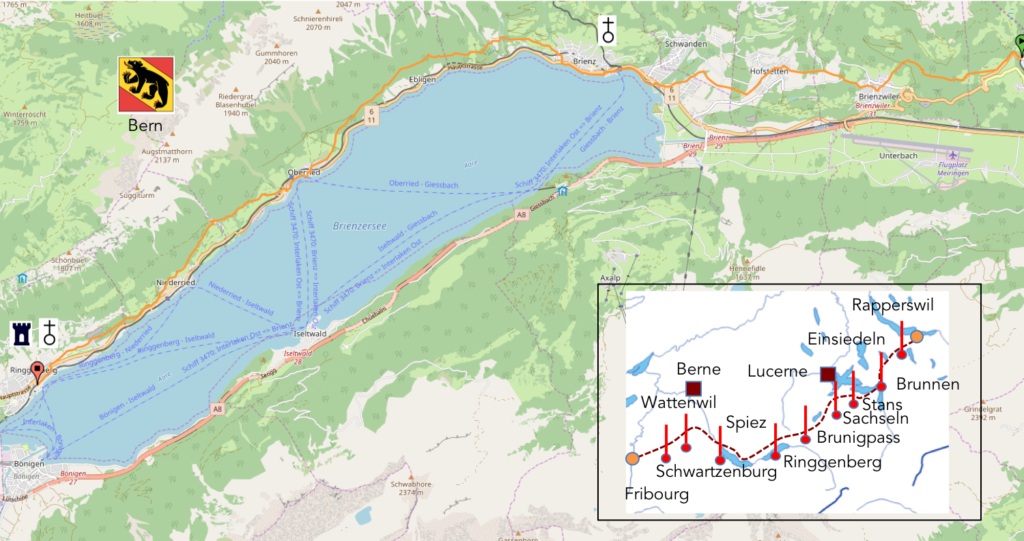 Today, the route plunges from the Brünig Pass into the Bernese Oberland, where the blue and limpid lakes of Brienz and Interlaken rub shoulders with the majestic mountains, the Finsteraarhorn, the Eiger, the Mönch and the Jungfrau which are the pride of the region. It is a beautiful stage, sometimes wild in the canyons. Beyond Brienz, the route climbs three times from the villages on the edge of the lake to the heights and then descends immediately. It crosses villages, where old wooden buildings with often sculpted walls compete in grandeur and majesty. It also crosses the small town of Brienz with its wooden sculptures. It is the local speciality, and a school, unique in Switzerland, teaches the trade there. Further on, the route crosses forests, wild canyons and countryside. It offers continuous glorious glimpses of Brienz Lake below, with its waters changing color with the changing moods of the weather. In this country, the churches are not legion. In fact, they are temples, because the canton of Bern is a Protestant canton.

It bears repeating here. Crossing the Camino de Santiago in German-speaking Switzerland is an enchantment renewed every day. Even if you tirelessly cross meadows and small groves, the peasant heritage is present everywhere, but varies from one valley to another. There is virtually no culture in the region. And in this country of livestock and milk, the wealth of the Bernese peasants has further magnified and brought to excellence the beauty of farms and houses.

Difficulty of the course : Slope variations are significant today (+645 meters /-1050 meters) and it is a leg-breaking stage, quite demanding. The pathway climbs again above the Brünig pass to dive (and the word is not strong: more than 400 meters) on Brienzwiler. Afterwards, light ups and downs await you up to Brienz. Beyond Brienz, the routeh only slopes up and down from one canyon to another, from one village to another until finally reaching the lake at the end of the stage, in Ringgenberg. In this stage, you will cross an incredible number of small canyons, without a drop of water, which are in fact only large screes descending from the mountain or avalanche corridors in winter.

In this stage, courses on pathways or paved roads are equivalent:

Section 1: A long and demanding descent to Brienzwiler. 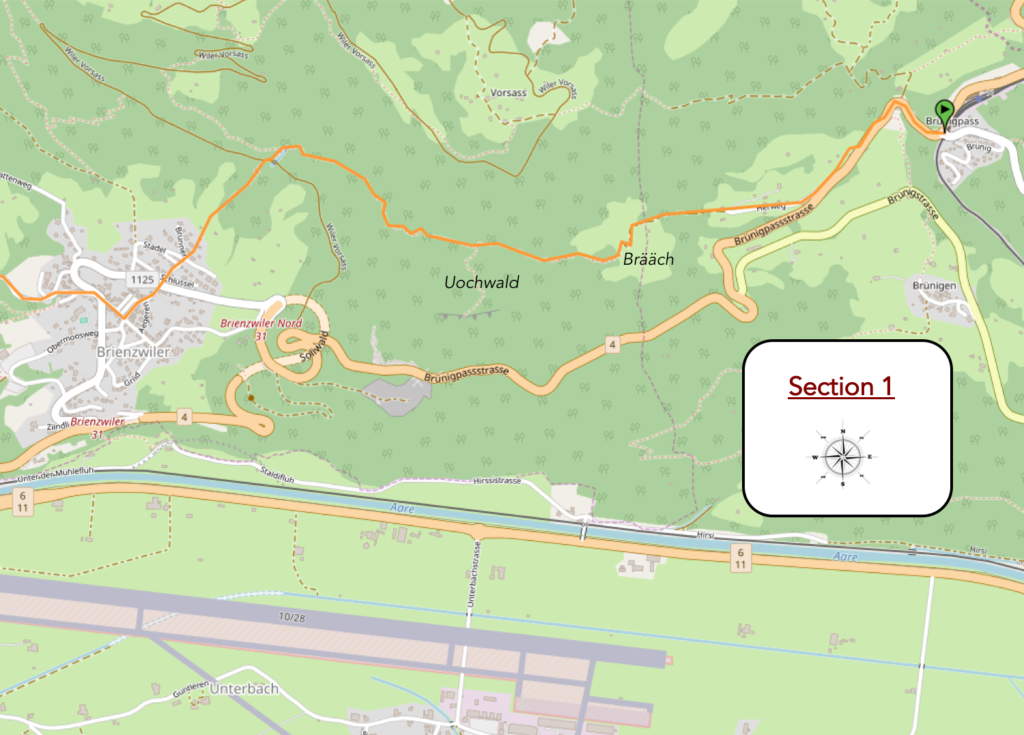 General overview of the difficulties of the route: tough descent, even in good weather. In places, the slopes easily exceed 25%. Nearly 500 meters of negative sloping. 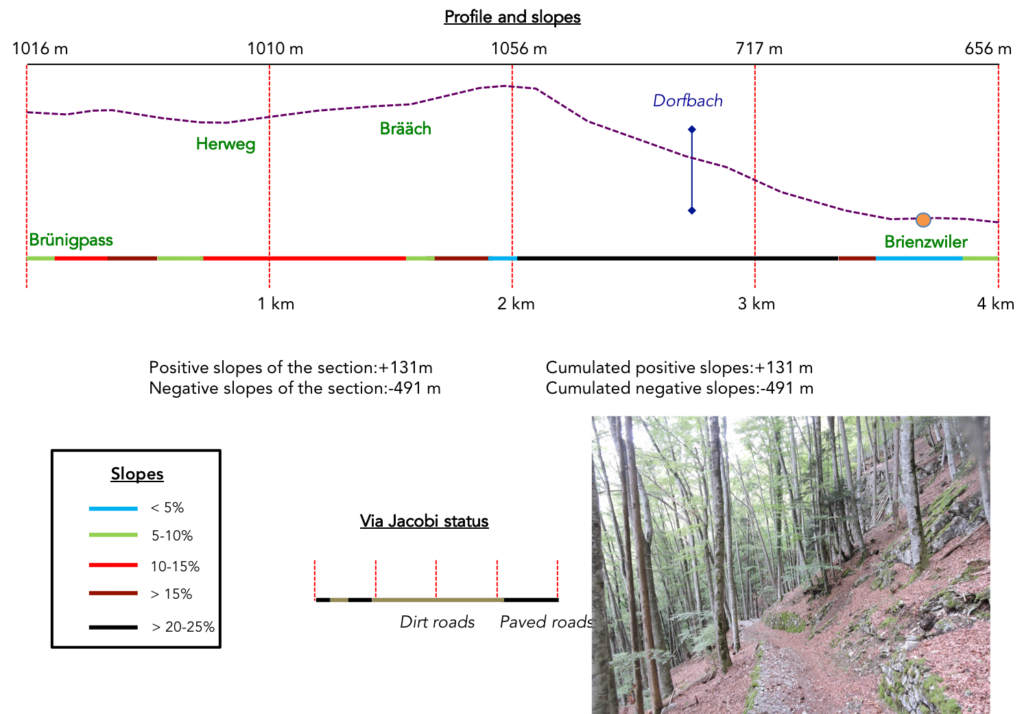 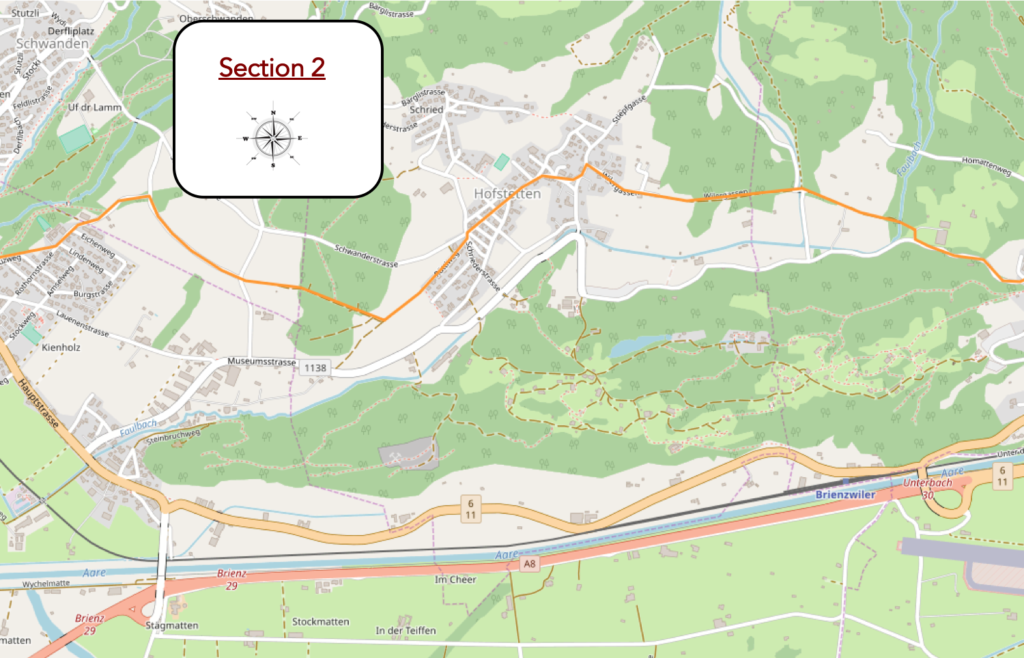 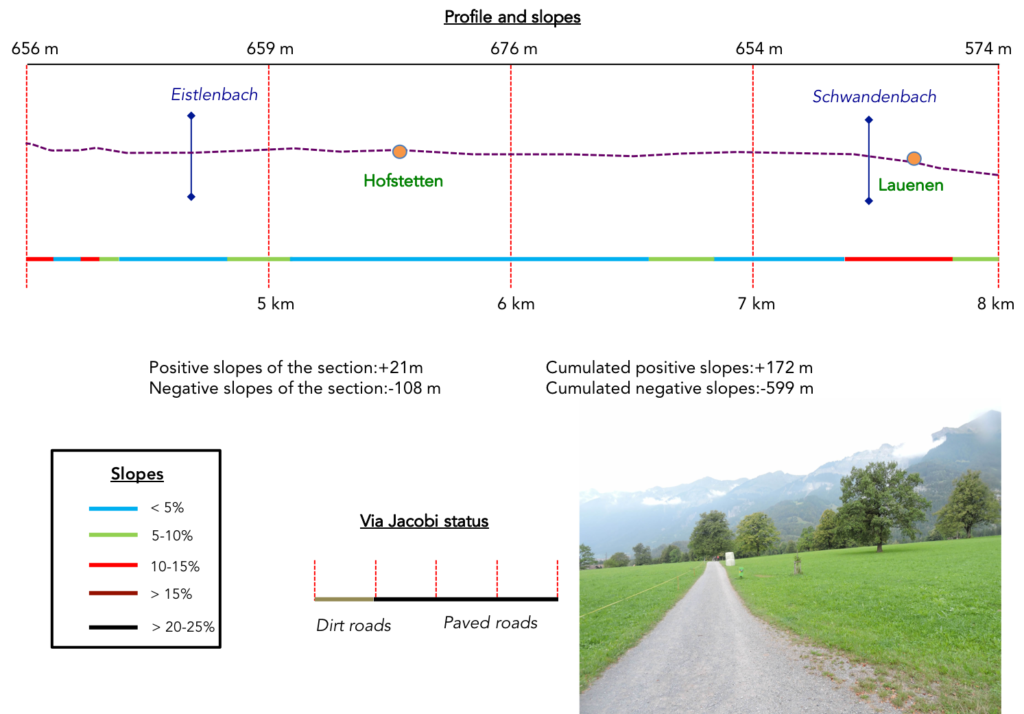 To say that people here know how to work with wood makes sense. At the exit of the village, a factory, specialist in wooden toys, offers amazing stylized cows. 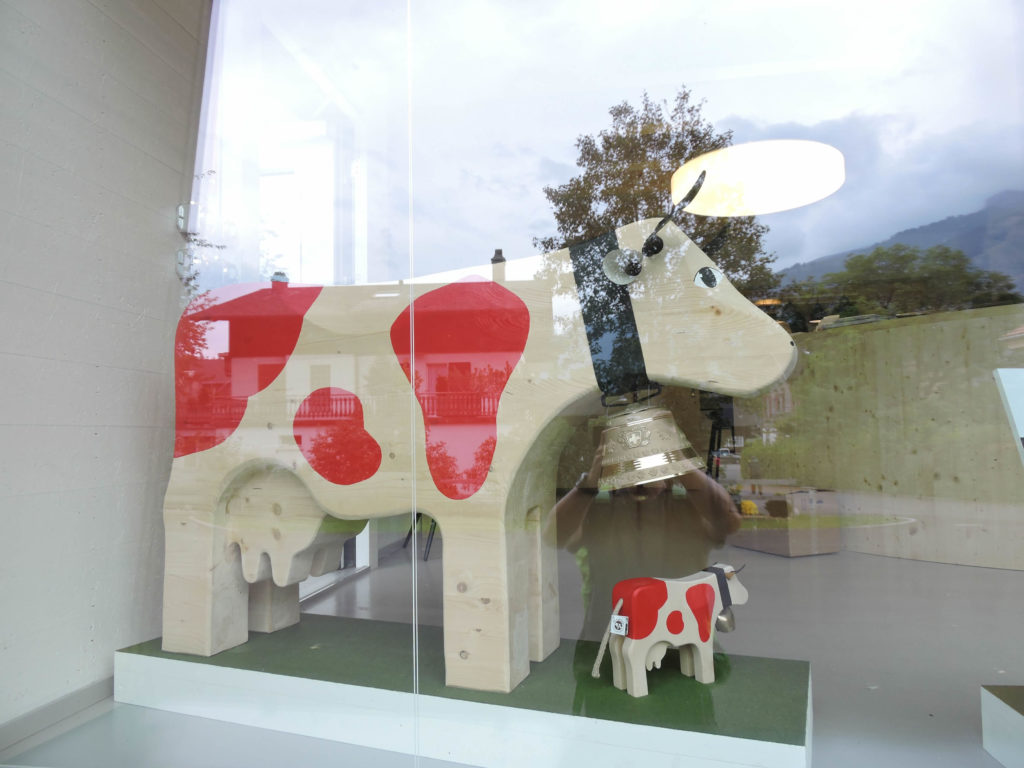 Section 3 :The beautiful crossing of Brienz. 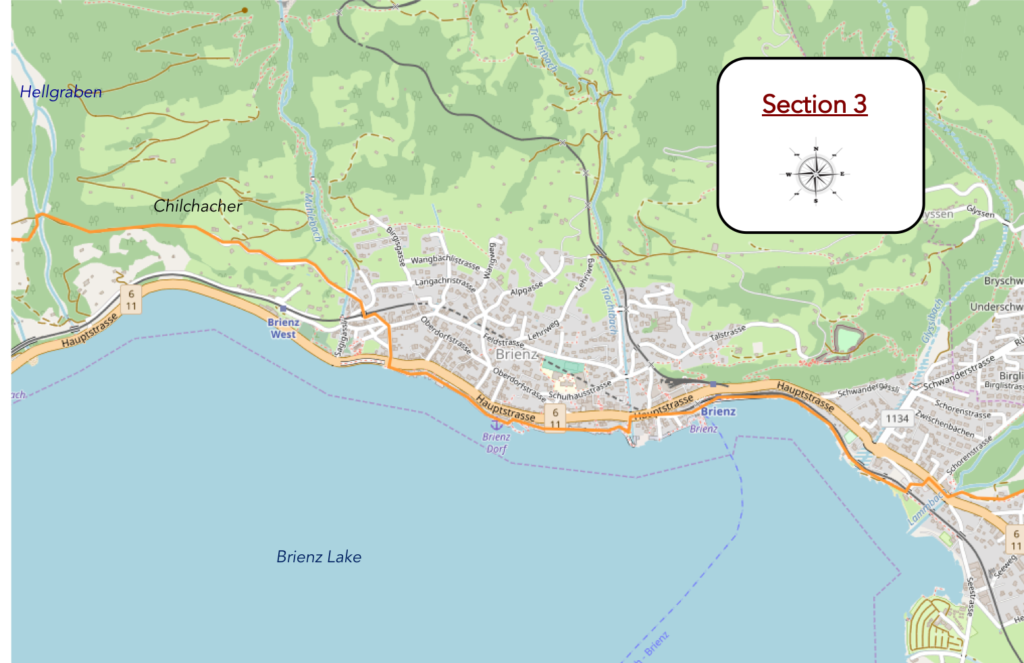 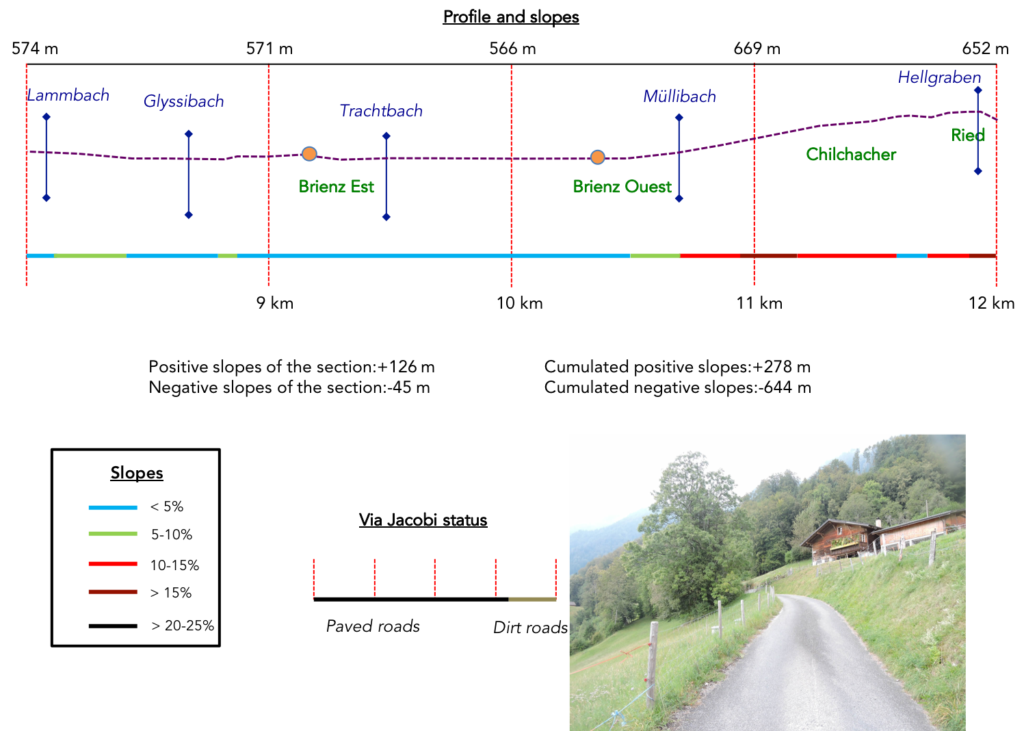 Further on, the road crosses the Glyssibach River, laid out between dykes. All the rivers that descend from the mountain, in fact canyons, carry large stones and have little or no water. But, the floods must be violent here, considering the extent of the protections put in place. 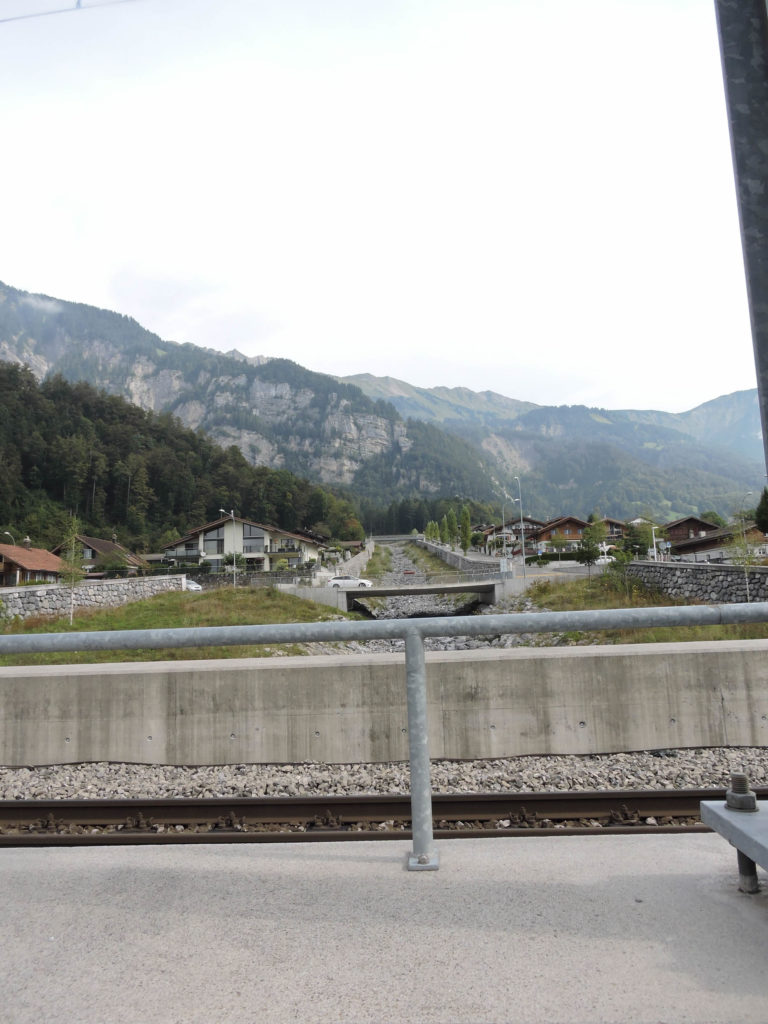 Here begins the permanent exhibition of wood carvings of which Brienz holds an international reputation. It’s just beautiful, an art that has left tradition for contemporary modern art. You are far from the eternal and traditional sculpted fountains, so present in the country.

If you want to take a day off here, enjoy taking the steam train up the Rothorn mountain on incredible inclines. The view up there on the lakes and the Alps is exceptional. In good weather, of course. 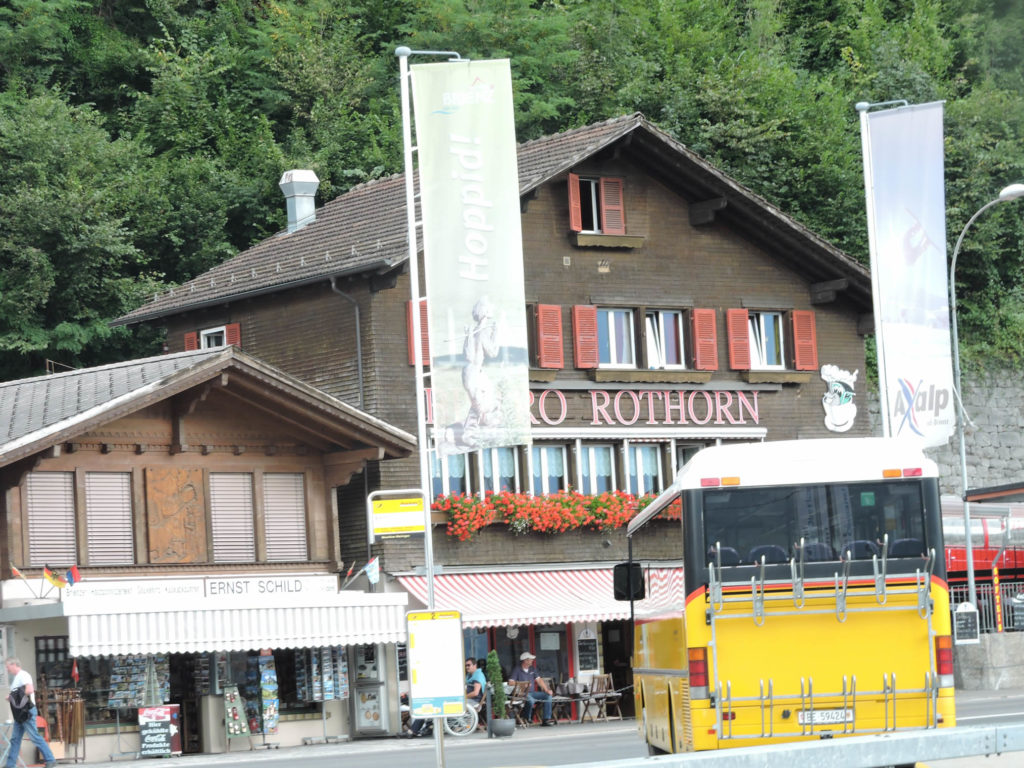 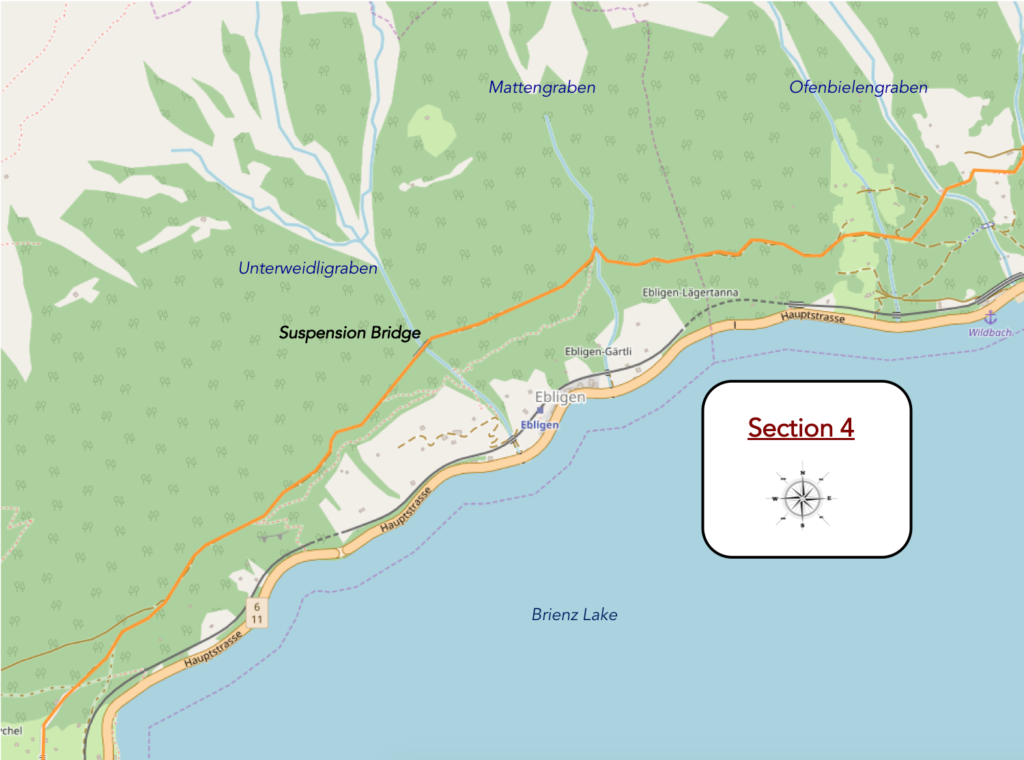 General overview of the difficulties of the course: leg-breaking course until you reach the suspension bridge over the canyon, then a steady descent. 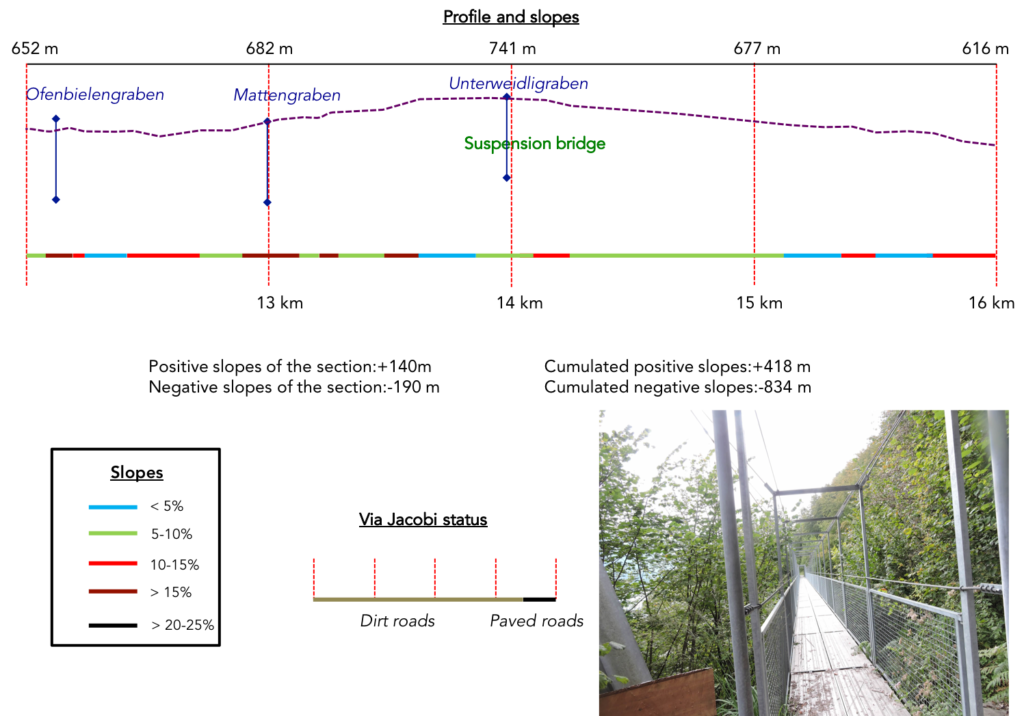 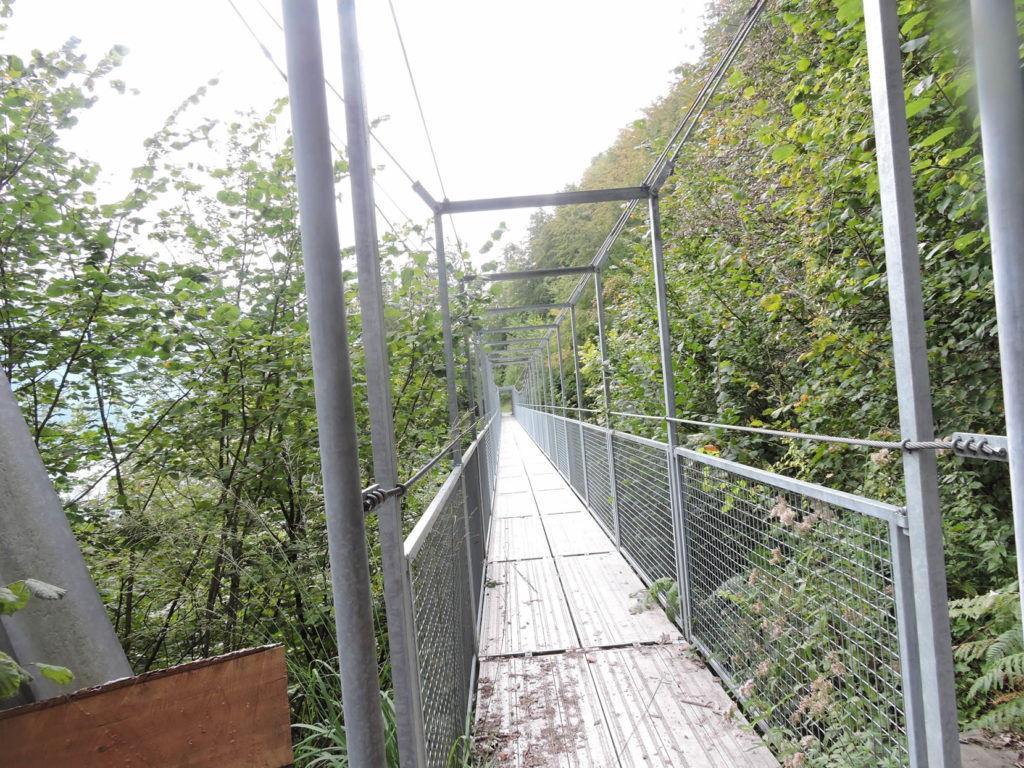 Section 5: The track descends to Oberried, then climbs again. 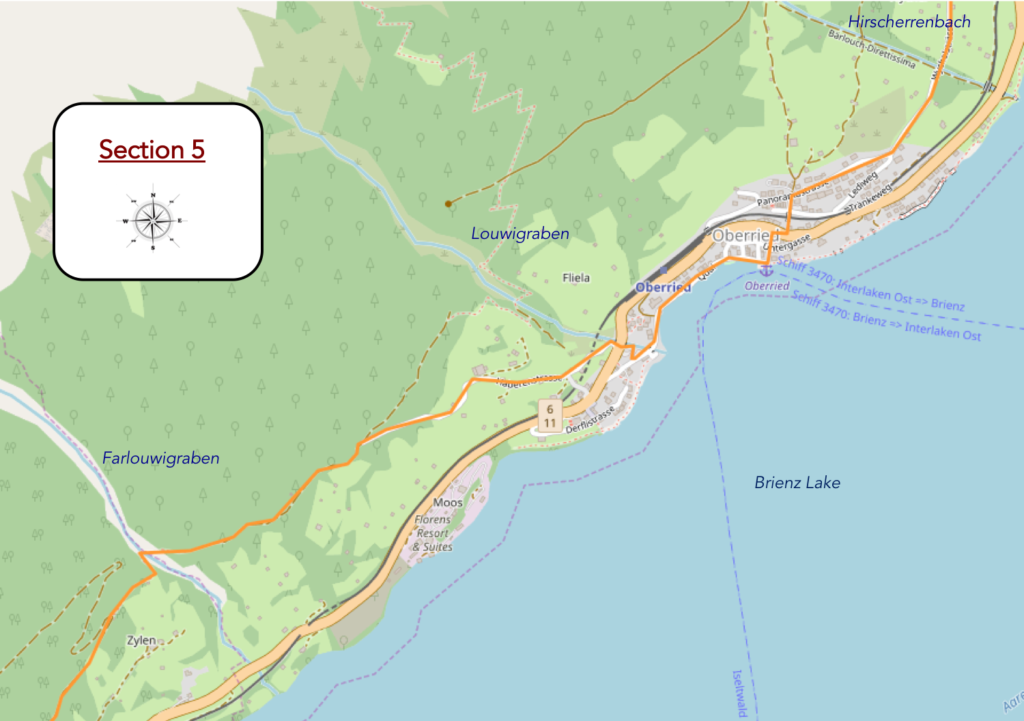 General overview of the difficulties of the route: still difficult, with sometimes steep slopes. 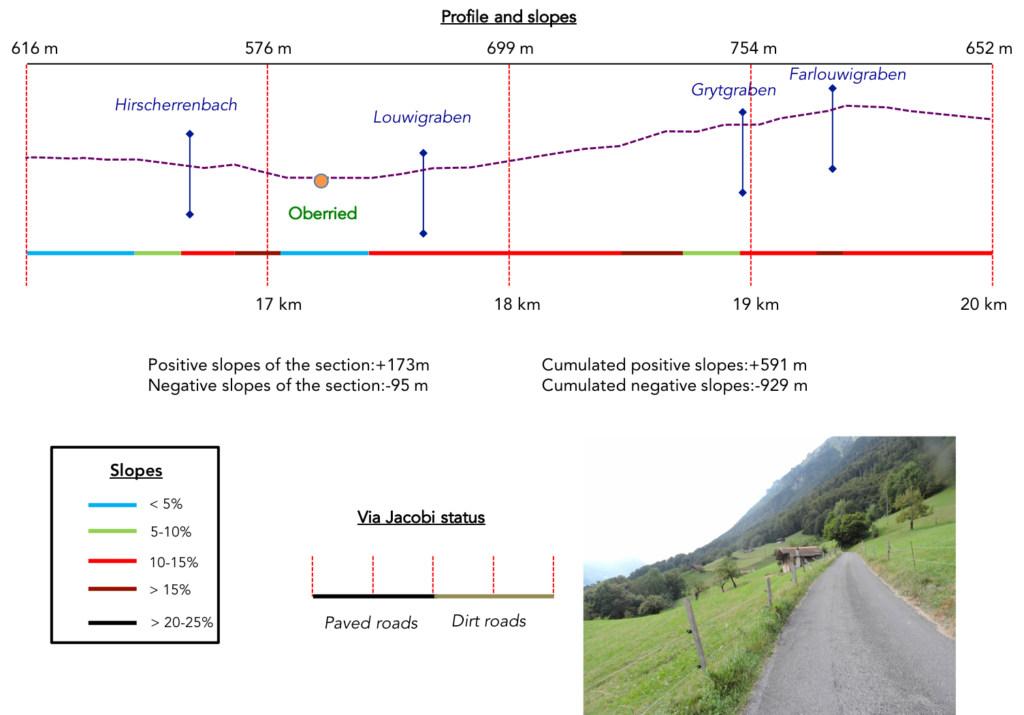 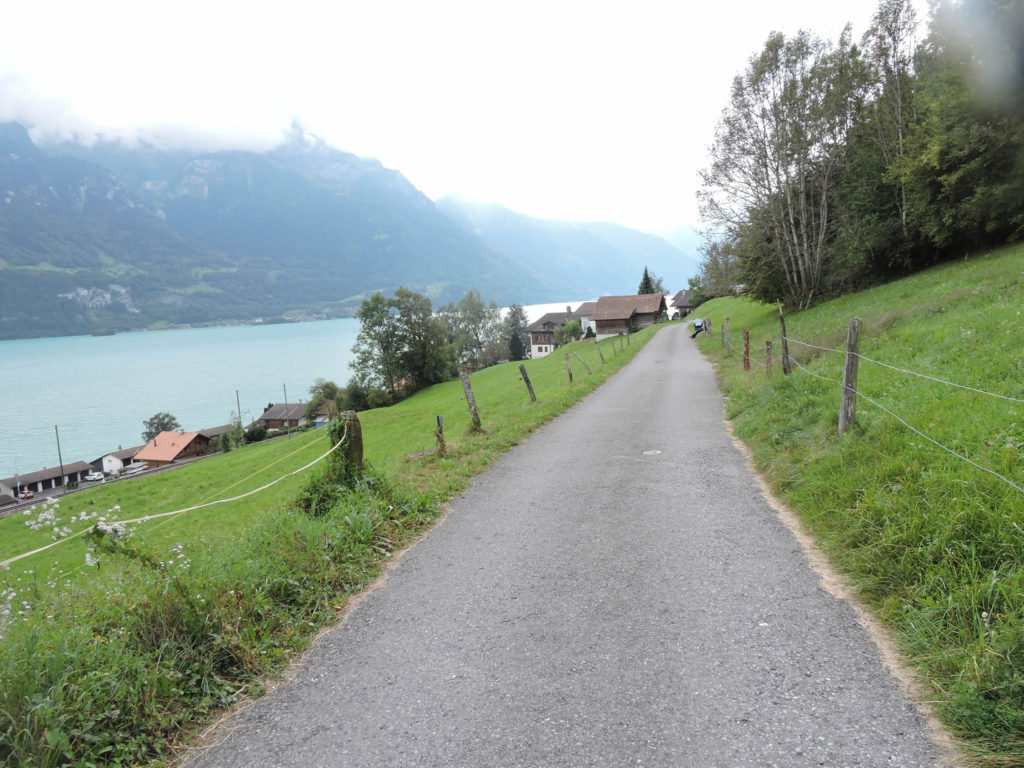 There are of course some beautiful wooden houses in Oberried, but they are less numerous than in Brienzwiler which remains the reference among the villages crossed on the way.

Shortly after, it joins the lake road at the end of Oberried. 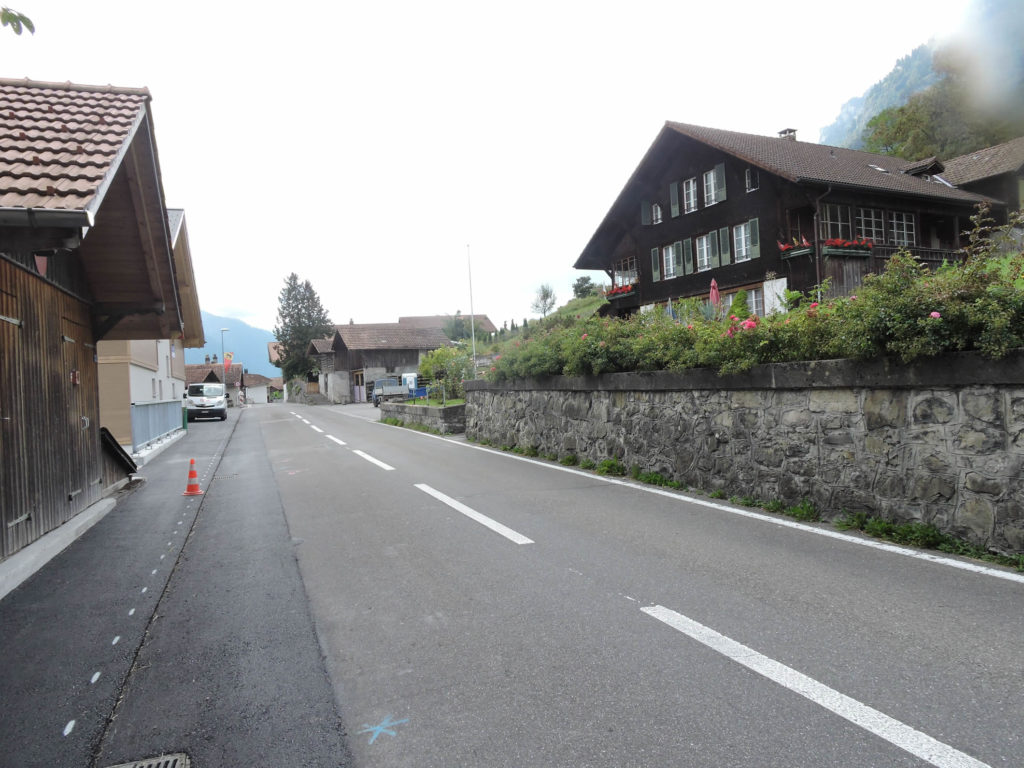 Section 6: The track rejoins the lake at the end of the stage. 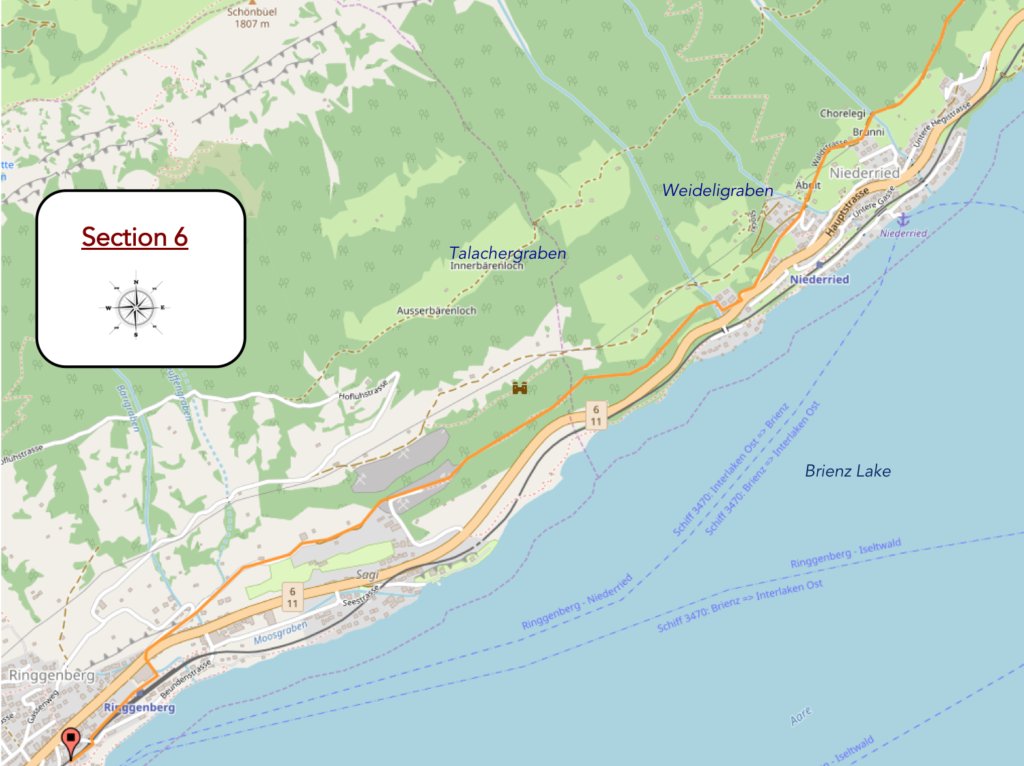 General overview of the difficulties of the route: ups and downs, with sometimes very steep slopes. 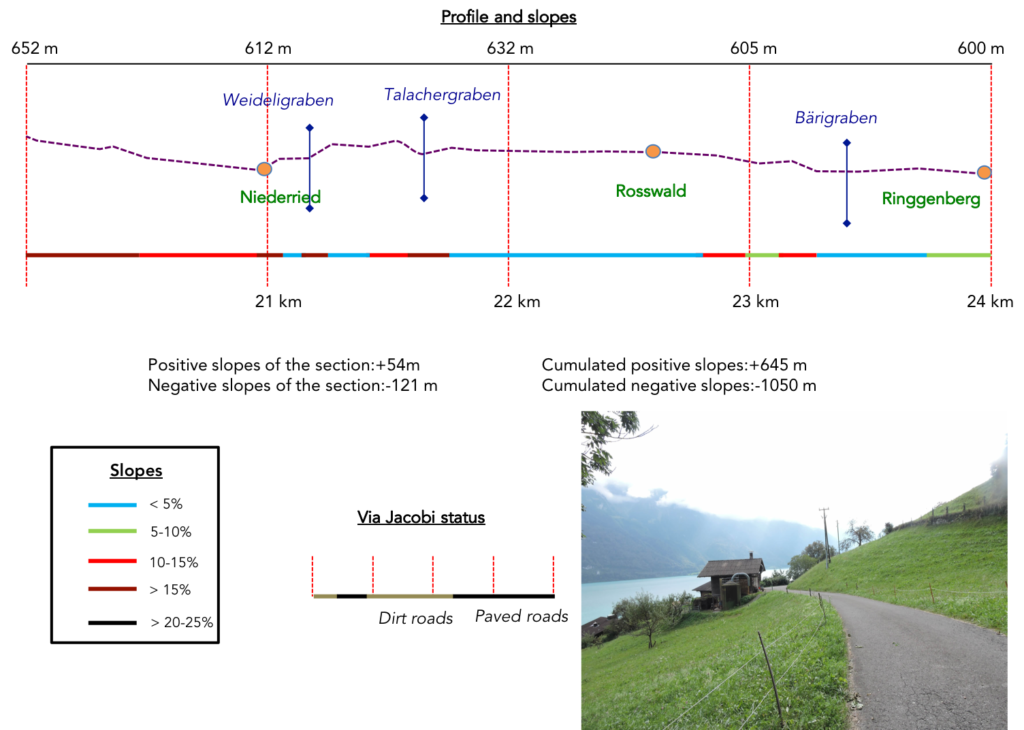 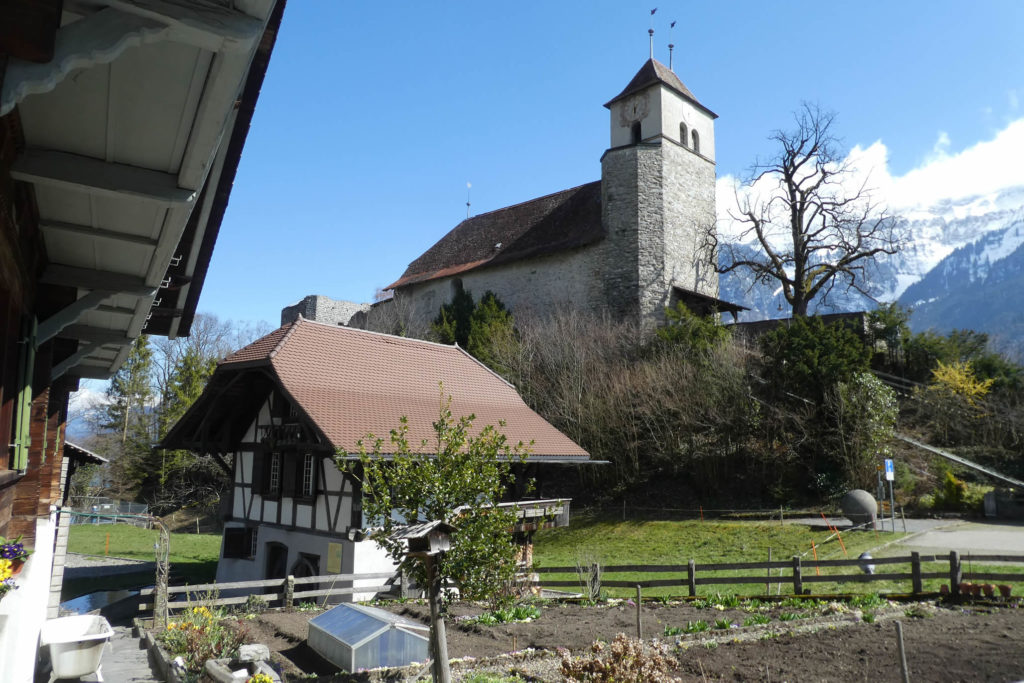 In a large part of the canton, land use planning must be very strict. The Bernese peasant is proud of his houses and for new constructions, apparently wood must be used, in the hope that it will age as well as in the houses of yesteryear. 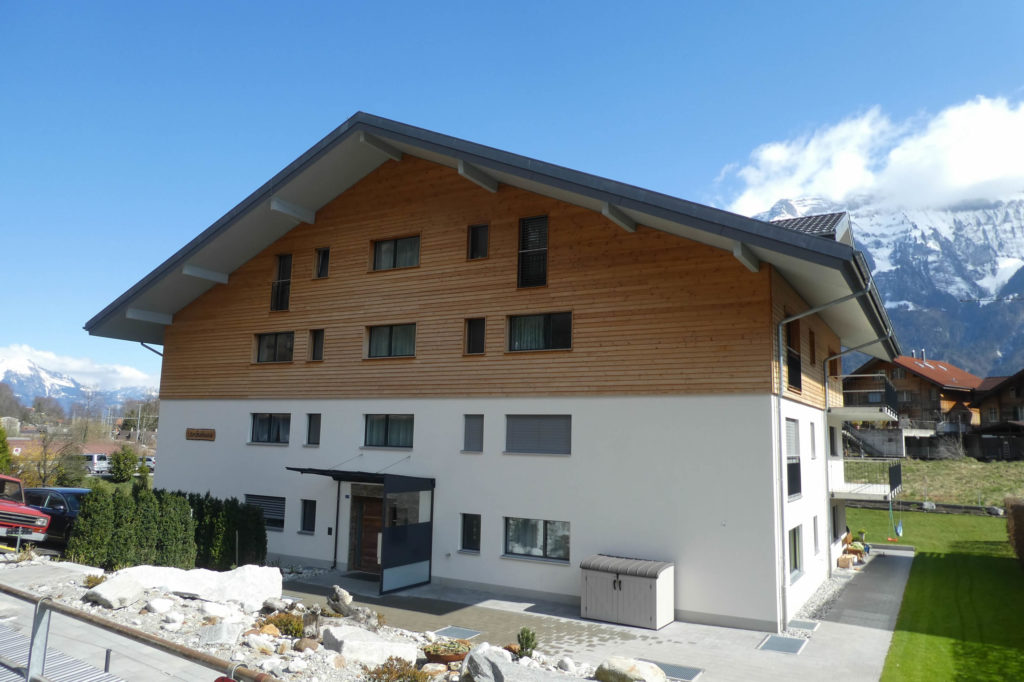 Next stage: Stage 10: From Rinnggenberg to Spiez