For many Compostela pilgrims, Switzerland is out of context. For them, the Way starts from Le Puy-en-Velay, most often, and runs as far as Santiago in Galicia. And that’s all. They simply forget that the Camino de Compostela in Switzerland is undoubtedly one of the most beautiful of all the ways which go towards Santiago. The Swiss course is just a pleasure renewed every day, passing from a green valley to another more beautiful and greener. The landscapes look like postcards, and it’s not a cliché to say so. All that is missing is the alphorns to give musical life. Farmhouses and houses of undeniable charm lead the way amid forests and pastures. You will remain speechless admiring the hilly pastures and the gray or the Simmental cows which follow one another as far as the eye can see, with here and there, an isolated farm. The villages and small towns, especially in German-speaking Switzerland, are real gems, with their typical gables, their stone or wooden facades, and their painted or carved wooden corbels. Yes, Switzerland alone is a vernacular open-air museum. The route crosses all of Switzerland from east to west, from Bodensee to Leman Lake, near Geneva, at the foot of the Alps, in the middle of the chapels, churches and high places that have made the history of the original Switzerland.

Even if the country is very mountainous, everyone knows it, the course is practiced on not insurmountable slope variations. The highest point is only 1400 meters above sea level. And then there are the lakes of central Switzerland, and not only Lucerne and Interlaken, which attract tourists from all over the world with a frenzy. Grass and cows line the route, except that you still have to go through the big cities, as the country is small. But the cities, often with a medieval heart, are all more beautiful than the other. Starting from Bodensee, on the Austro-German border, you will walk successively through St Gallen, Rapperswil, the small towns of primitive Switzerland, then Fribourg, Lausanne and Geneva. The tracks also allow you to make a detour to Basel, Lucerne or Bern. Crossing the country, you will undoubtedly have the opportunity, if you are a foreigner, to get a truer idea of Switzerland, where there are not only banks. The country is above all agricultural in nature, apart from the large agglomerations. Admittedly, the Swiss franc is strong, with a sometimes-difficult exchange rate for the poor citizen of the Euro zone. But, the Saint James welcomes (accueils jacquaires), where you can choose your share to pay, abound on the route.

The history of the Ways of Compostela in Switzerland is a recent history. Admittedly, a bundle of pilgrimage routes had crossed the country since the Middle Ages. The collegiate church of Einsiedeln has always been a must on pilgrimages. But it was not until 1989 that the Friends of the Way of Compostela and the Swiss Federation of Pedestrian Tourism (FSTP) tuned their violins to try to mark out possible tracks through the country. Thus, were born the routes starting from the Rhine valley via Basel, from German Swabia via Schaffhausen and Constance, from German Bavaria and Austria via Rorschach and Feldkirch, and even the Italian Tyrol via Graubünden via Chur. In Switzerland, this is translated by the term Via Jacobi (Jacobsweg). Via Jacobi offers the possibility to choose between 33 different variants across the country. The various Swiss tracks converge towards Geneva, where in fact GR65 track leaves towards Le Puy-en-Velay.

Here are the three route modalities that we will describe for the Camino de Santiago in Switzerland: 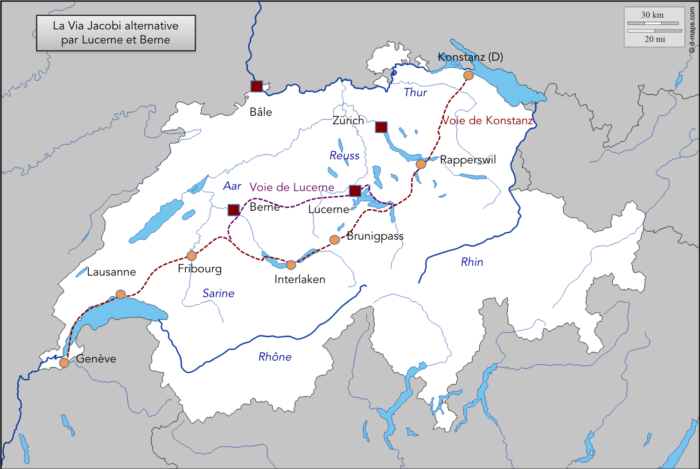 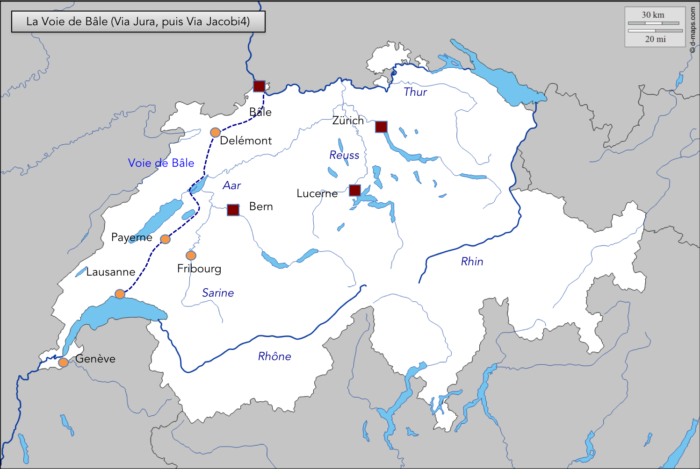 Who uses the Via Jacobi in Switzerland? These routes are mainly dedicated to local hikers. However, pilgrims from Germanic countries and eastern countries pass through Switzerland to reach Le Puy-en-Velay via Geneva. Swiss pilgrims usually connect on the way from their place of residence. Whether you are a foreigner or a Swiss wishing to start the Camino de Santiago at the border, the main departure point is at Konstanz Lake, the Bodensee. There are two main entrance gates: Kreuzlingen (CH) which adjoins Konstanz (D) or Rorschach (CH). The starting point, especially for foreigners, depends on the route of the pilgrims in Germany or Austria. For the most part they arrive in Konstanz. Others arrive in Bregenz, Lindau, Basel or Feldkirch. Those arriving towards Bodensee can start Via Jacobi either at Konstanz or at Rohrschach. The boat makes it easy to navigate from one point to another on the lake.

Which way to choose to reach Rapperswil? That of Konstanz or that of Rorschach? In distance, they are quite equivalent. If you have the choice, prefer the Rorschach route, because it allows you to walk to St Gallen, to visit the wonderful city center of the city, its bourgeois houses, built from the XIVth to the XVIIIth century, with their colorful facades, and by above all the collegiate area, listed as a UNESCO World Heritage Site, with its Baroque cathedral from the mid-XVIIIth century. This is where you can enter the Benedictine library of the convent and its 170,000 books. Via Jacobi is still a track that is more than 450 kilometers long. This often represents more than 20 kilometers of walking per day, often with slope variations that are not insignificant.

To navigate through the site, you can choose the track of your choice. All you have to do is enter the site on the route you want to follow, depending on your place of entry into the country.

– Rohrschach Way (Via Jacobi 4)
– Alternate Via Jacobi 4 via Lucerne and Bern
– Basel track by Via Jura, then return to Via Jacobi 4 in Moudon