Brünig, the only low altitude Pass on the Camino de Santiago 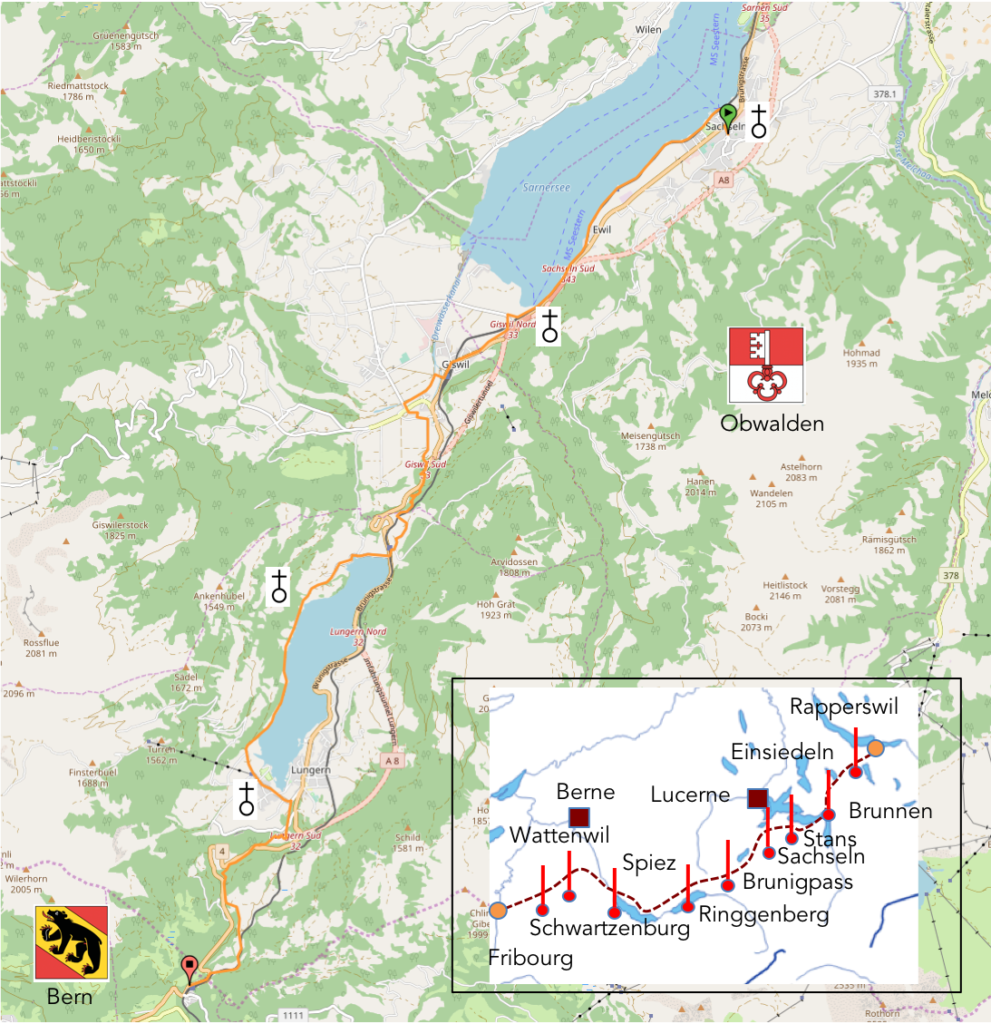 The Brünig Pass is an obligatory passage for the tourist when he intends to go from Lucerne in the Bernese Oberland, in the region of the 4,000 m of the Bernese Alps grouped on the heights of Interlaken. Despite its low altitude, the pass road has bends that delight motorcyclists and mountain bikers. A narrow-gauge cog railway line leads the army of Asian and Arab tourists to the pass from Lucerne to Interlaken. Trains have been running here since 1888.

Obviously, the pilgrim follows a different route, but the train never leaves you. From Sachseln, it follows the railway line for a long time, leaving it out of the corner of your eye to pass the Kaisersthul ramp. There, unlike the train, the pilgrim walks to the other side of the extraordinary Lake Lungern and its emerald green waters. But in Lungern, the pilgrim finds the train again. If you want to avoid the climb on foot to the pass, take the train. It climbs to the pass in less than 10 minutes. On foot, you will need more time and more sweat. But, you will miss the pleasure of a sporty climb, undulating cliffs. You can also pray there following the Stations of the Cross. The climb is magnificent.

Difficulty of the course: Slope variations are significant for such a short stage (+701 meters/-206 meters). It’s a fairly difficult stage, you still have to pass a pass, even if it’s not the highest pass in the Alps. Far from there! If the first part of the route is a walk along the shore of Lake Sarnen to Giswil, from there, a first serious bump awaits you. You have to climb to the upper lake of Lungern, at Kaiserstuhl. Here, the slope is as severe as higher up towards the pass. The walk along this beautiful lake is problem-free. But beyond Lungern, the climb of the pass begins, with sometimes (but rarely) slopes greater than 25%. 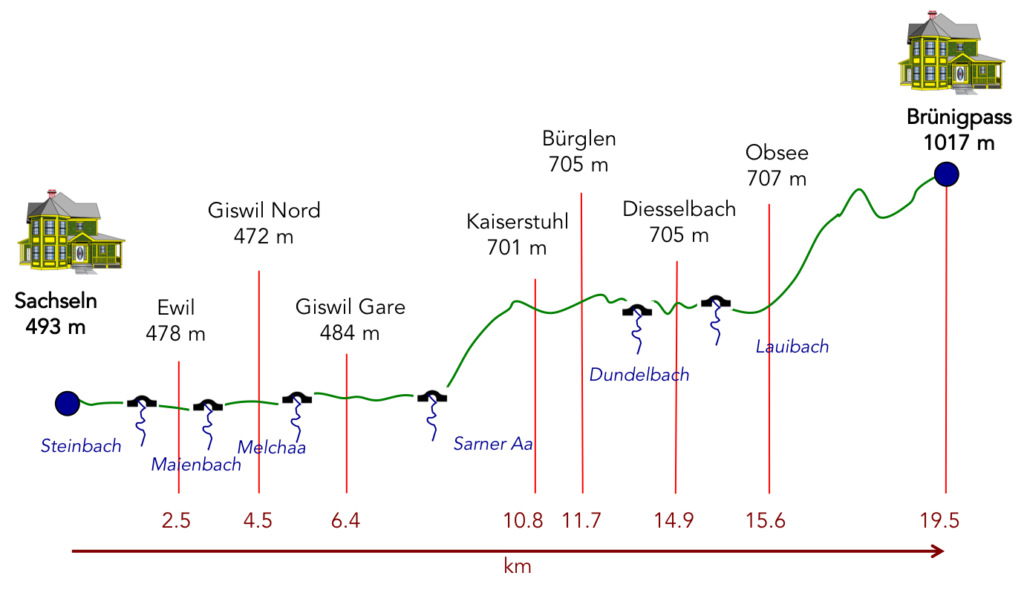 In this stage, the pathways clearly exceed the paved roads: 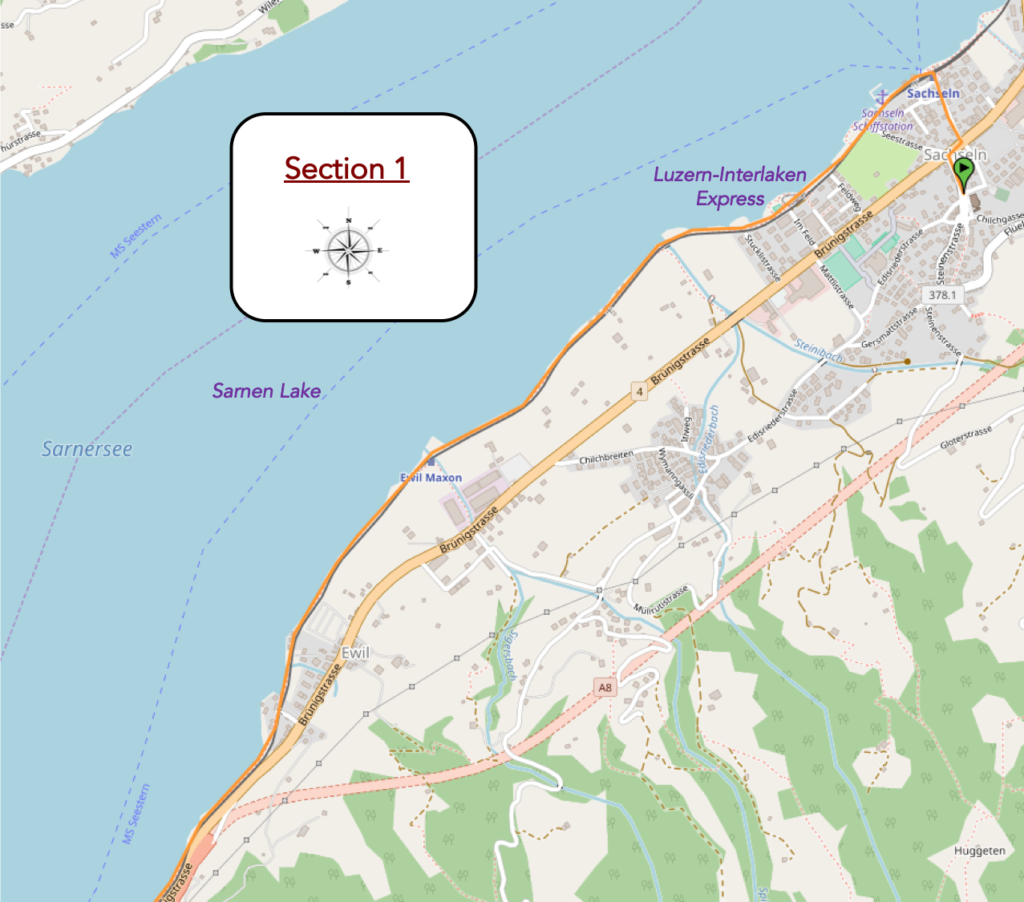 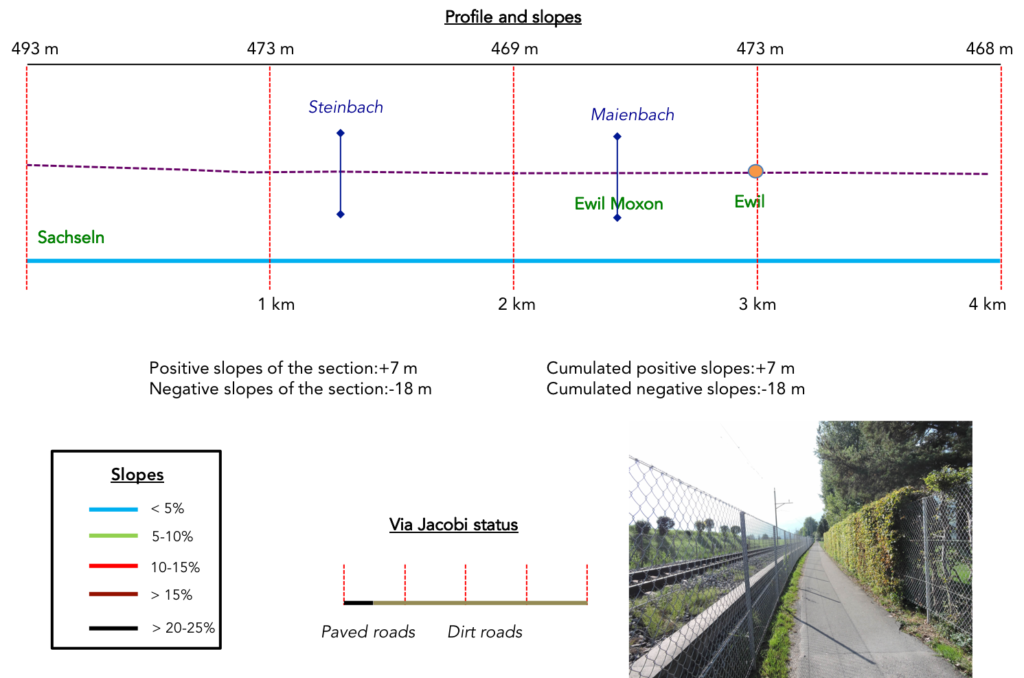 Section 2: The long crossing of Giswil. 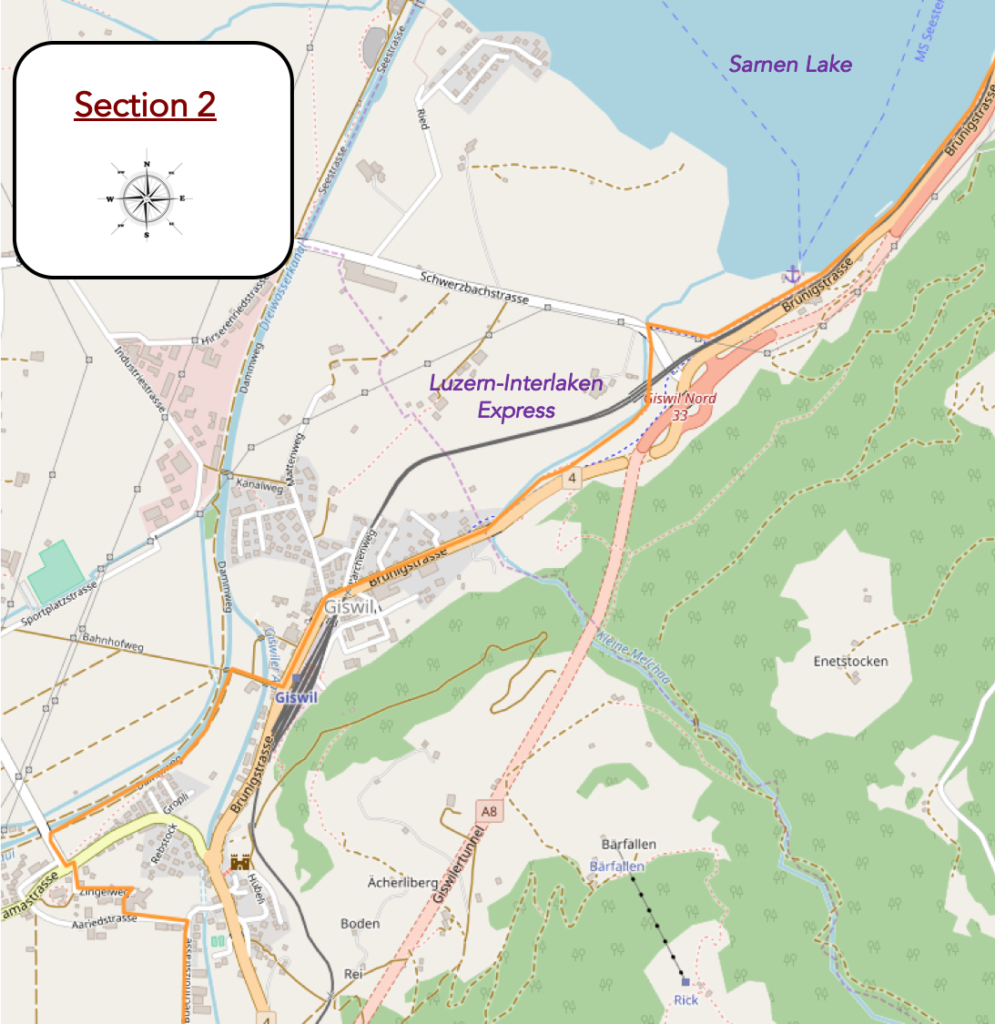 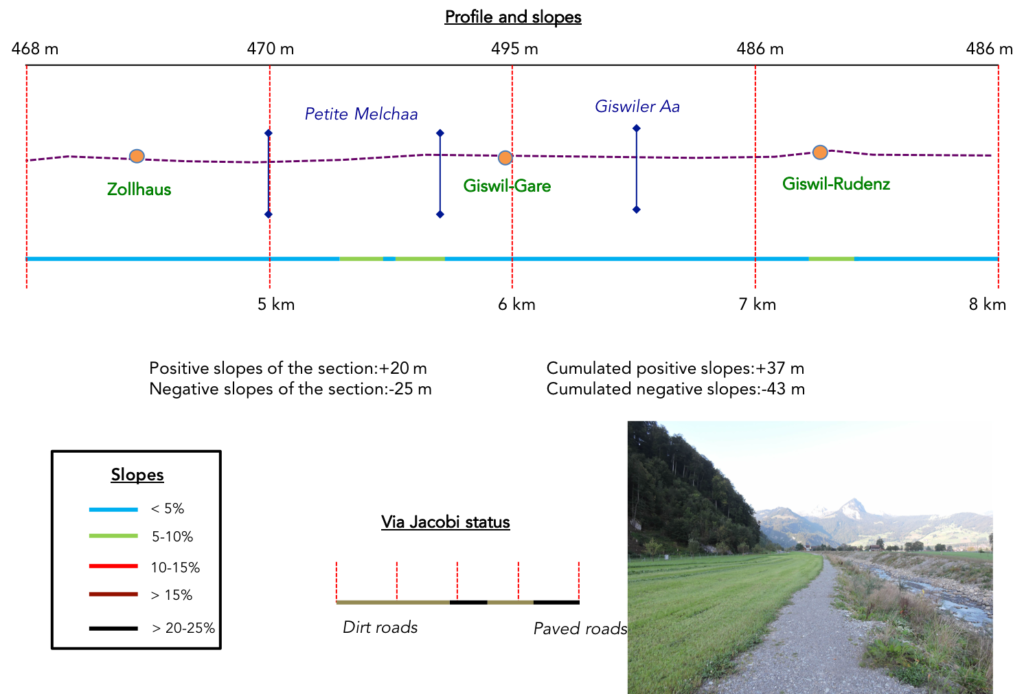 We will say that it will be difficult to generate enthusiasm in the crossing of this very rocky region. Certainly, nature is wild, but not the ambient decor, in the middle of the roads. 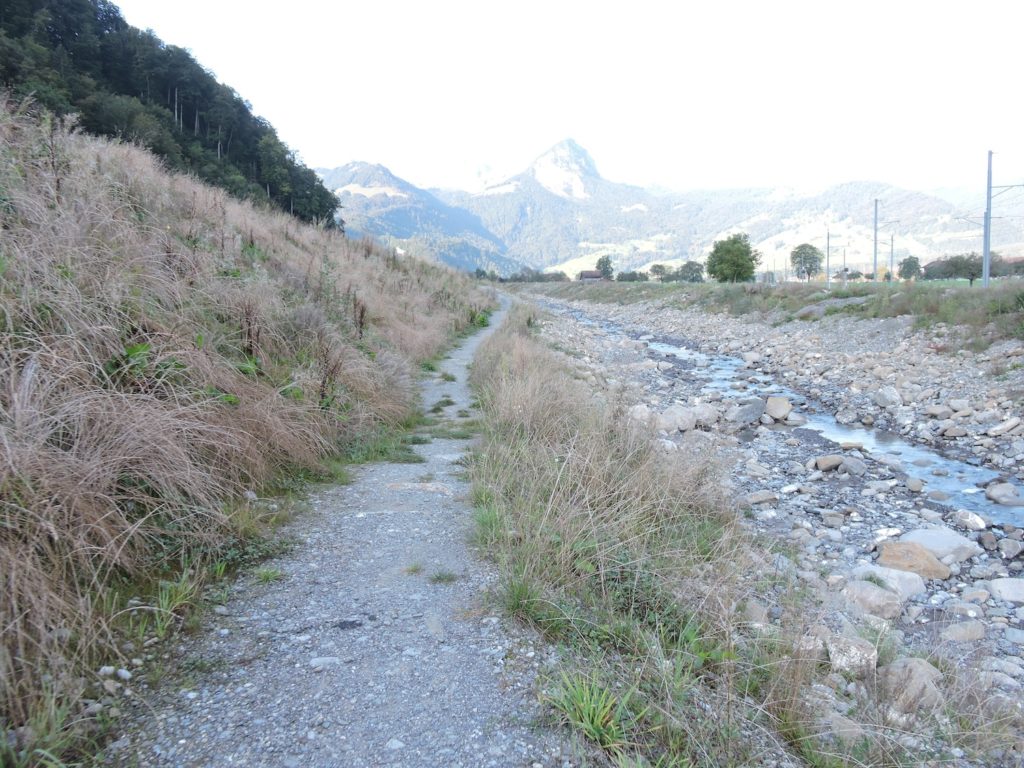 Section 3: The demanding climb to Kaisersthul before the splendor of Lungern Lake. 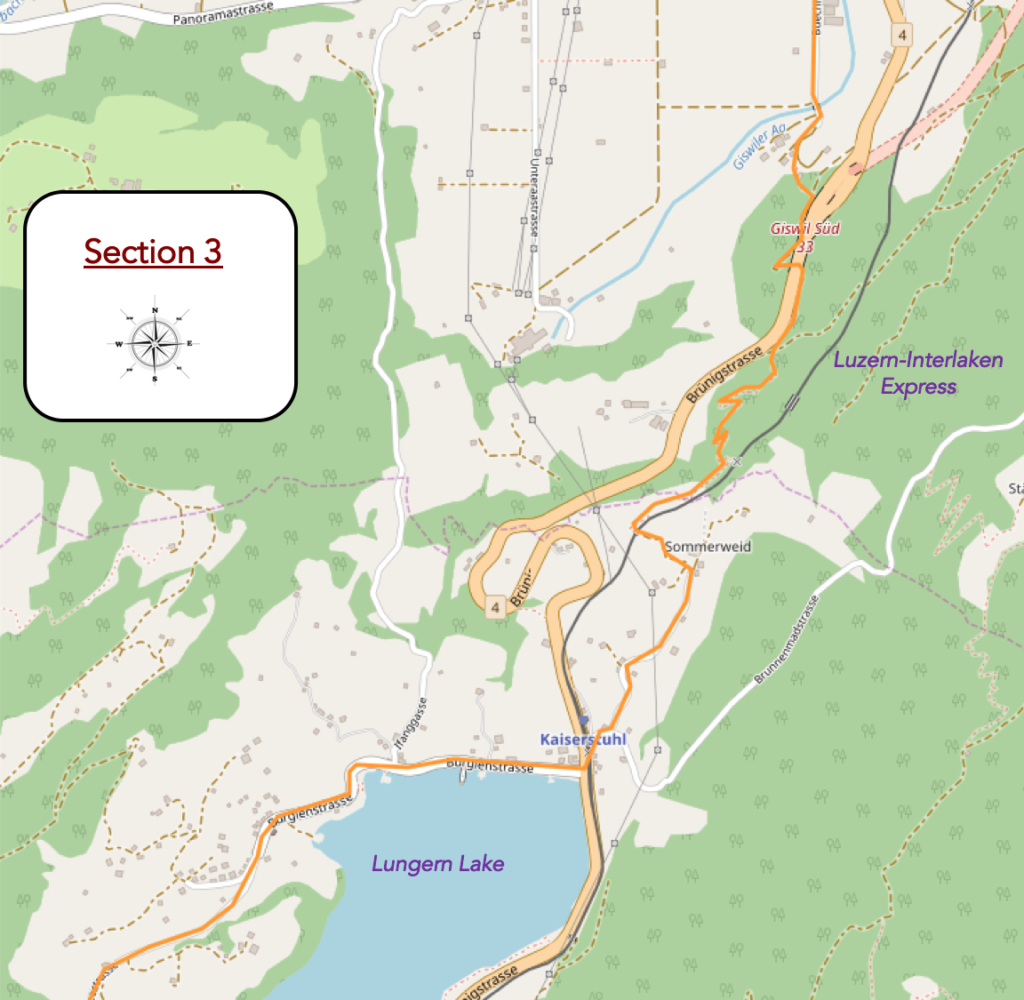 General overview of the difficulties of the route: tough climbing, more than 250 meters of elevation gain over 2 kilometers, then a walk by the lake. 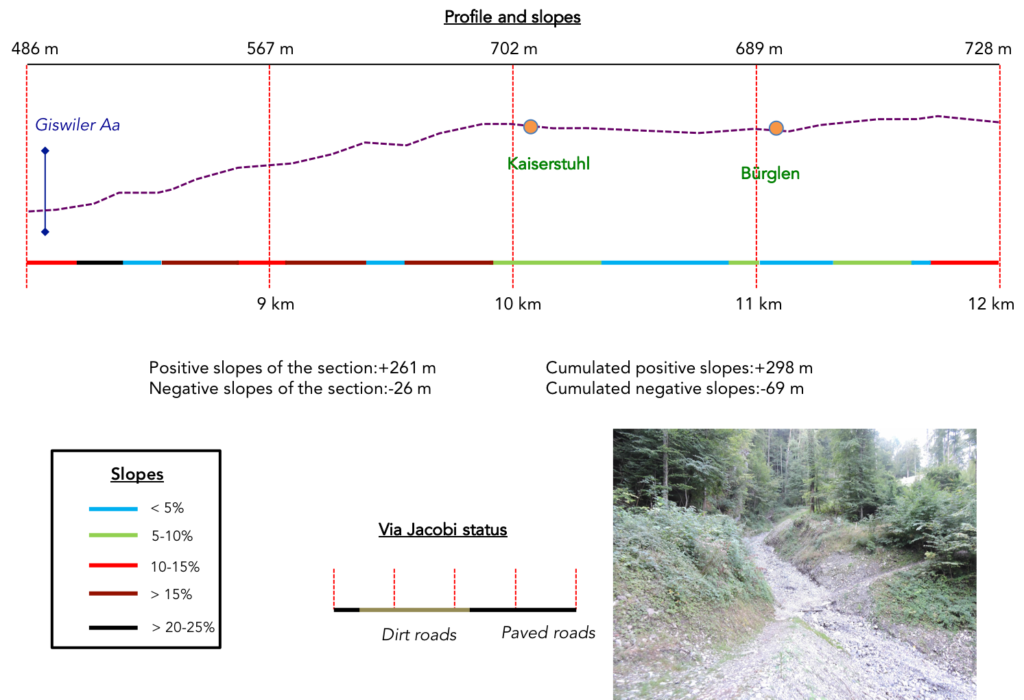 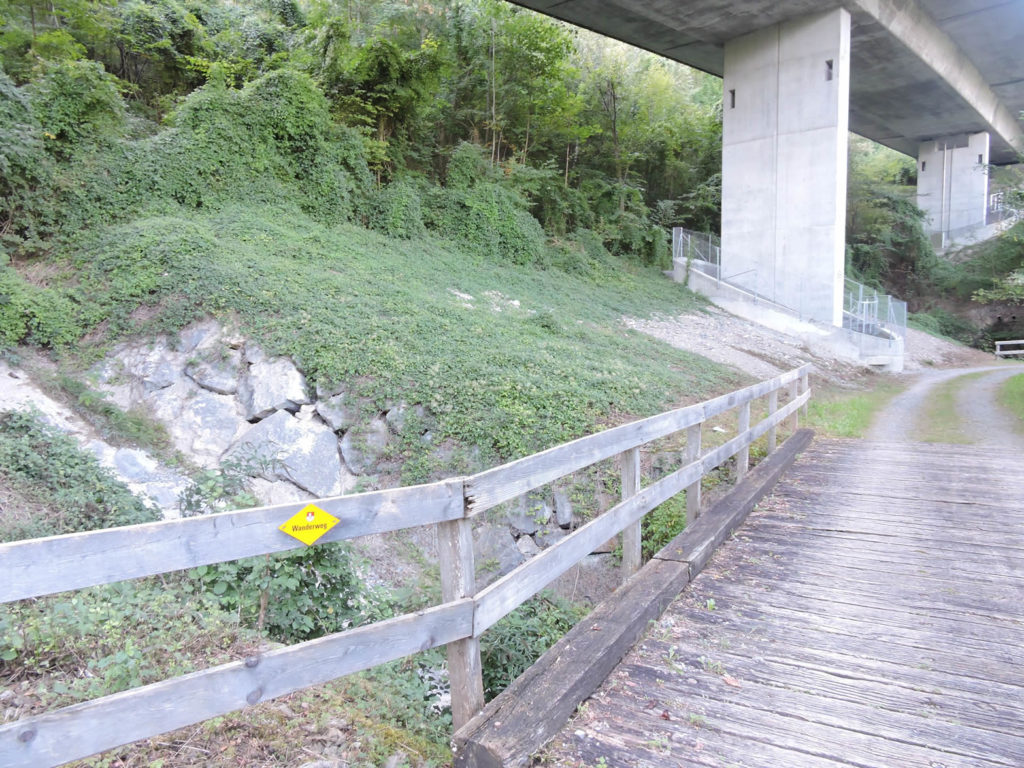 Below, you can take a last look over the Giswil region as far as Sarnen Lake at Zollhaus. 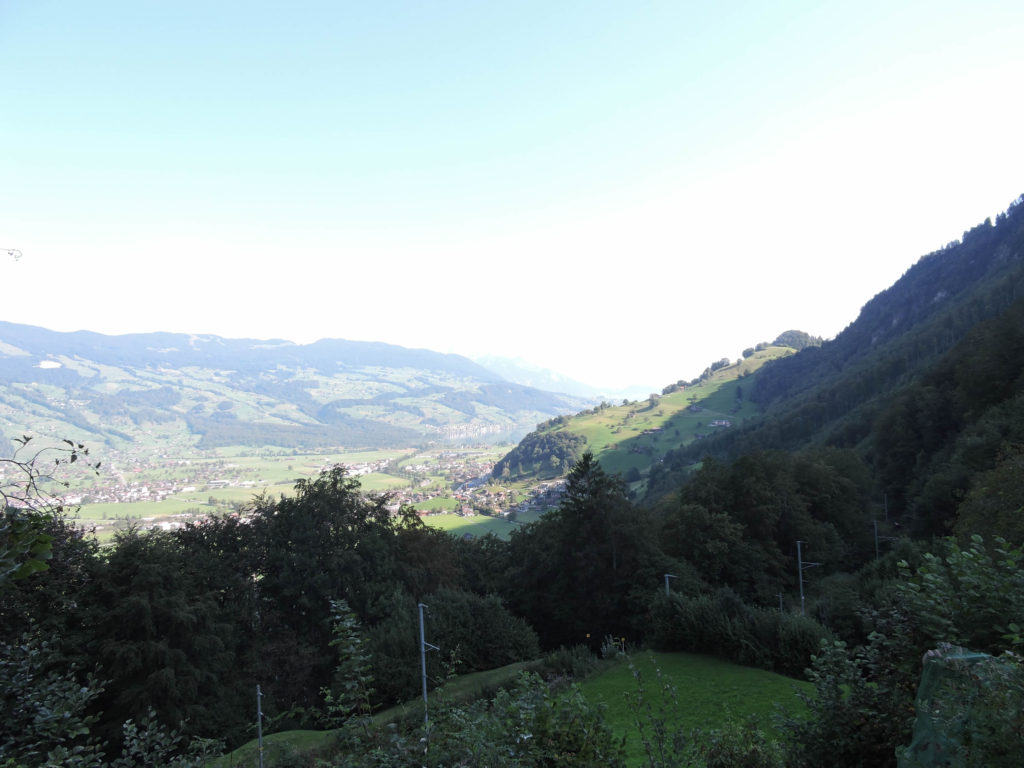 Here, the Finsteraarhorn, the highest peak of the Bernese Alps, peaks in the distance, culminating at 4274 meters, one of the highest mountains in Switzerland. Below the road stretches the lake.

Section 4: Still a bit of respite before the pass. 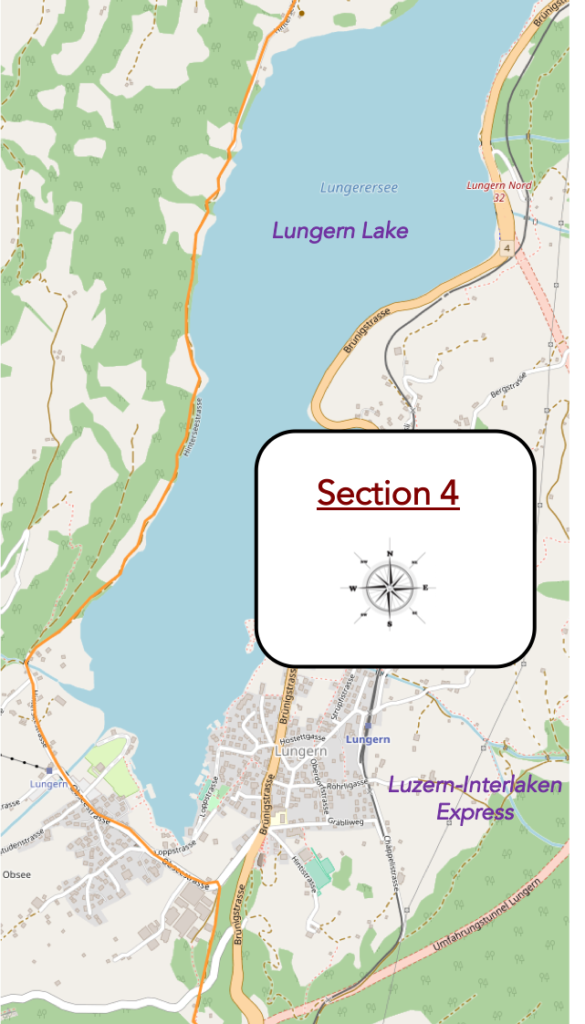 General overview of the difficulties of the route: : course without any difficulty. 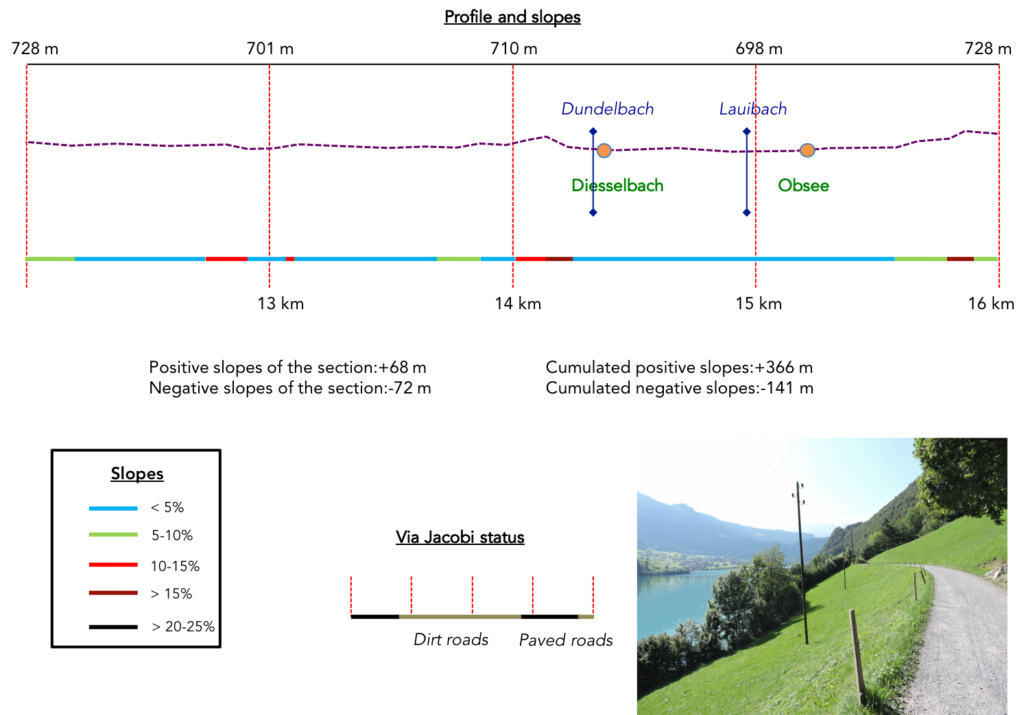 Section 5: A long climb to the Brünig Pass. 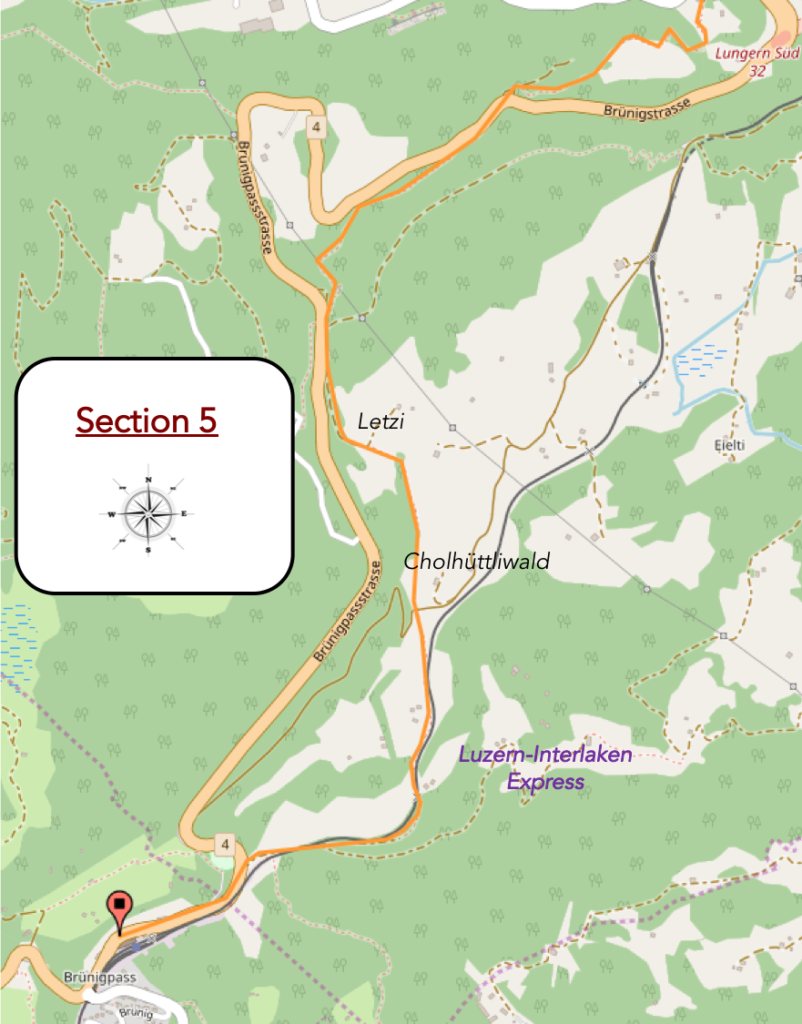 General overview of the difficulties of the route: steep climb, with an intermediate descent, just for the pleasure of sloping back up afterwards. 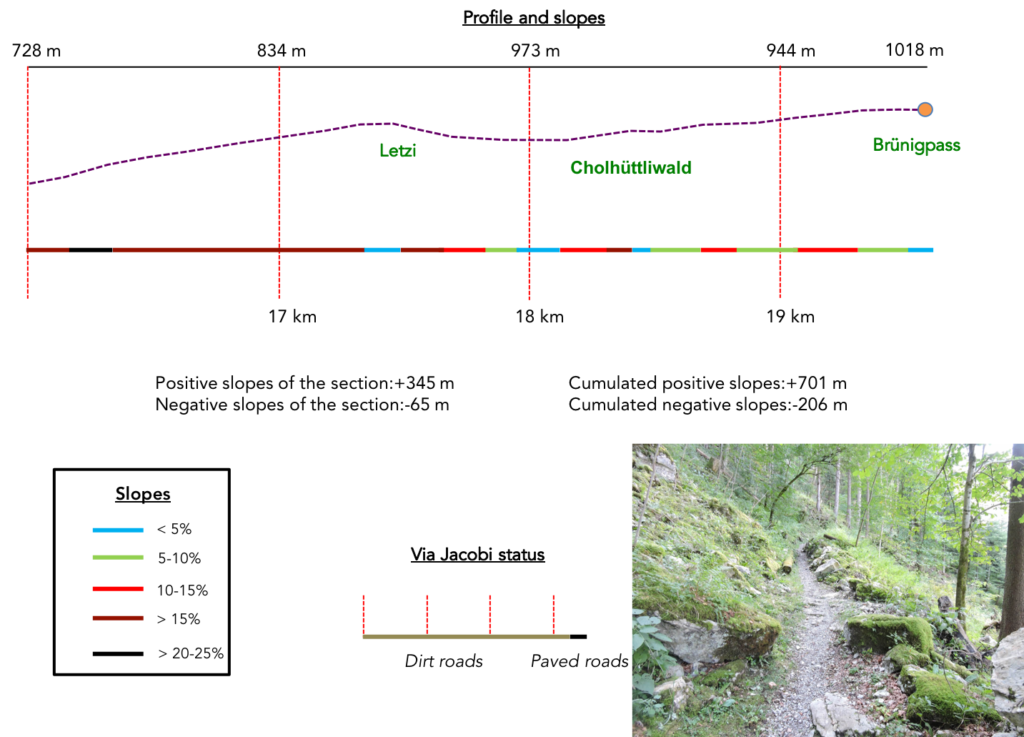 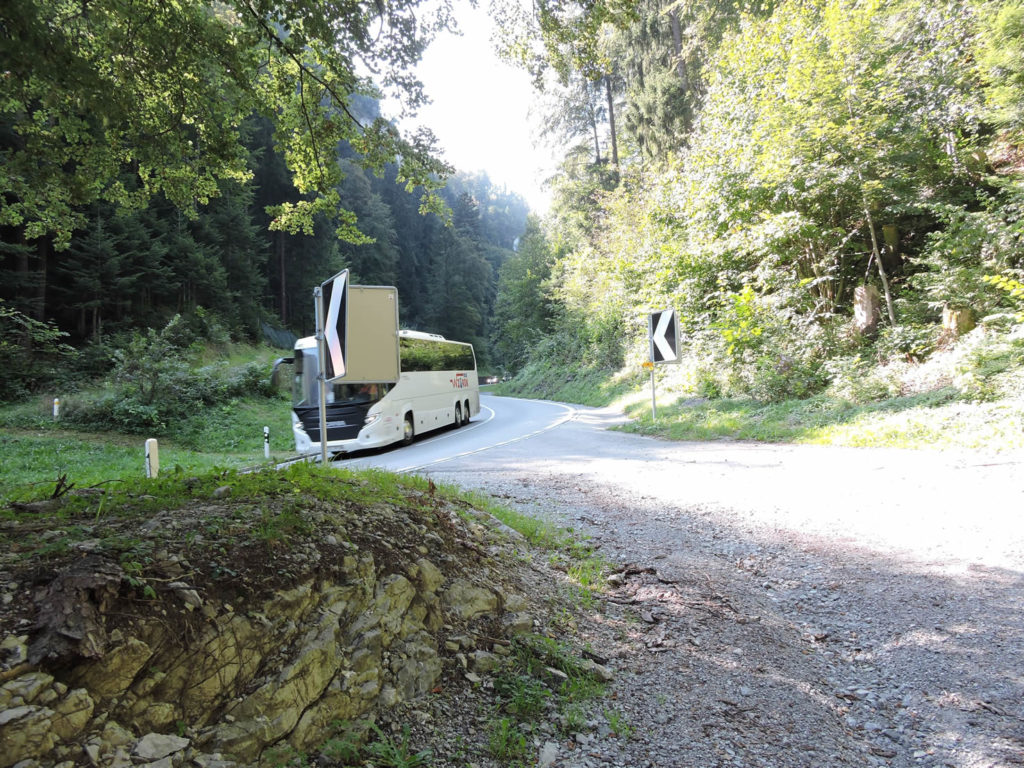 In an opening in the forest, you’ll see the road to the pass which runs a little further. Moreover, you often hear the engines rumble at many places of the climb. 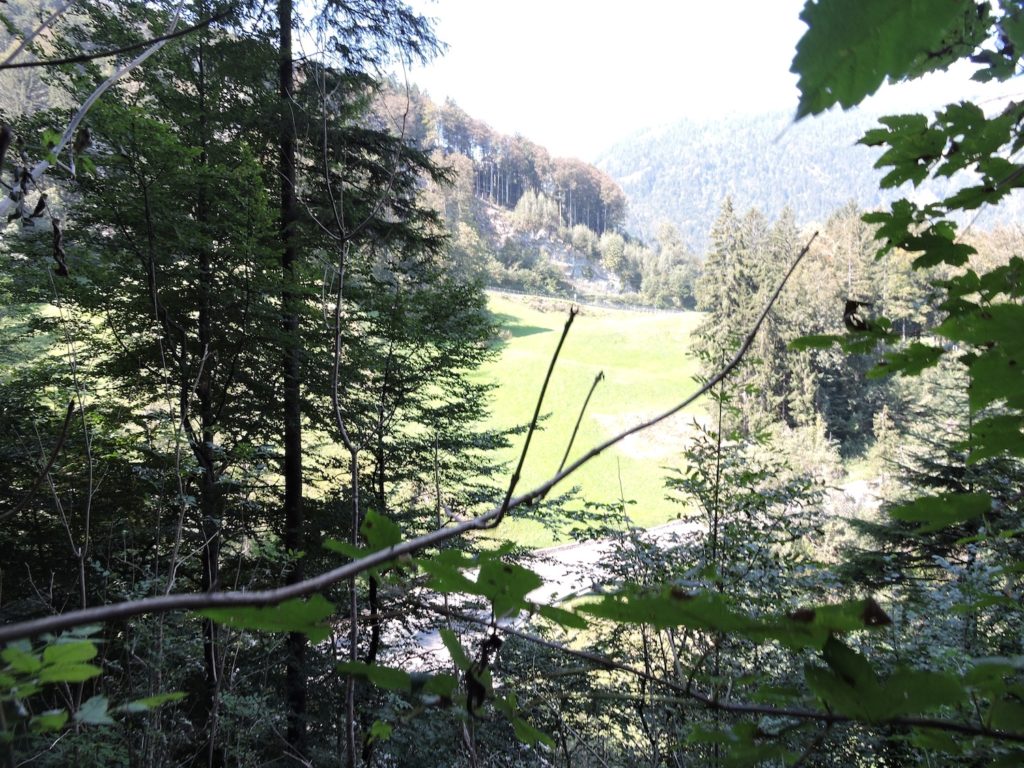 A little higher, more advertising for beer, but also for the nature protection league which has a chalet here. 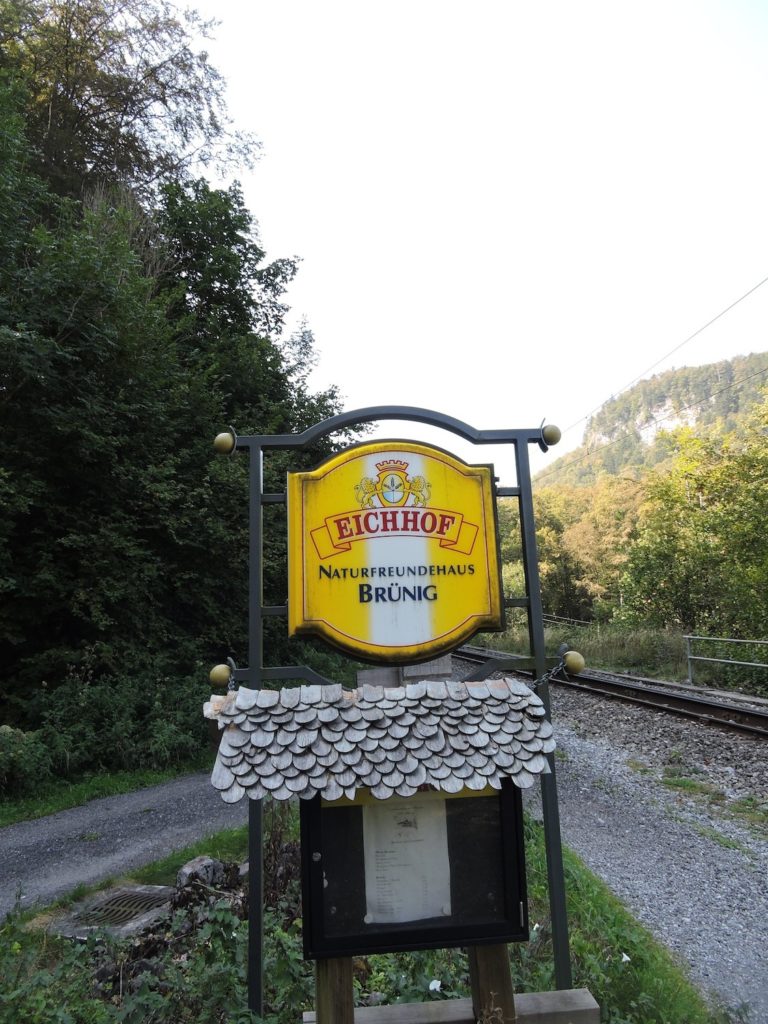 Next stage: Stage 9: From Brünig Pass to Ringgenberg