On the way to a beautiful medieval town 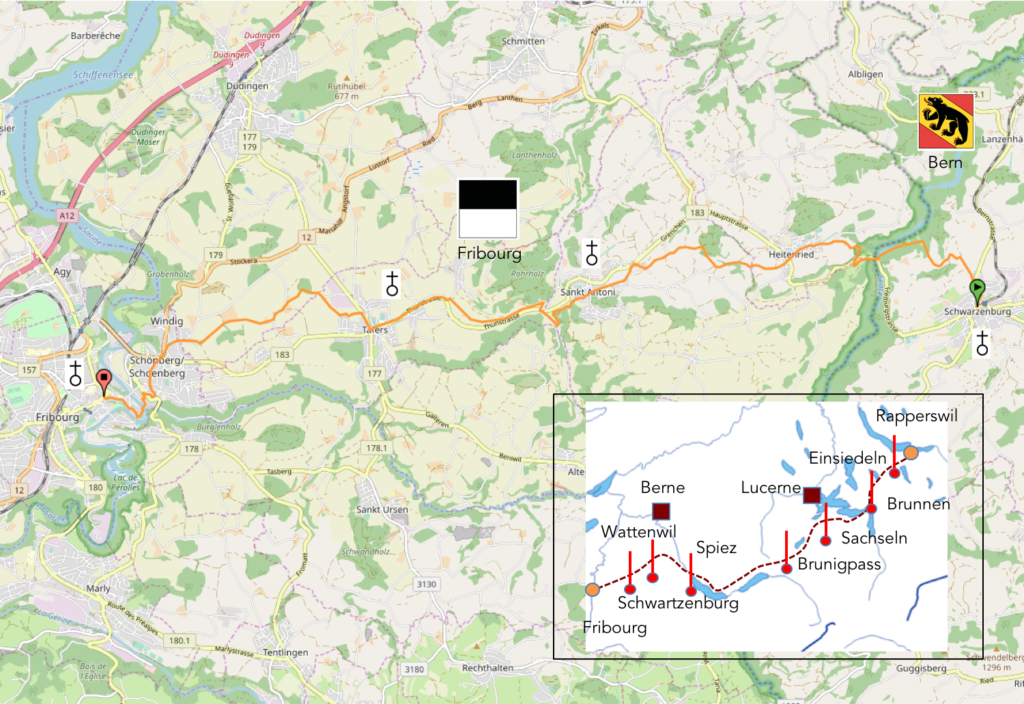 Today, the route leaves the canton of Bern, which you crossed from side to side for the canton of Fribourg. But these two cantons have had their destiny linked for centuries, since the heroic era and of the Habsburg in Bern and the Zähringen in Fribourg. There are still some hints of it, in a canton that speaks two languages.

We are around the year 1200 and the region is part of Burgundy. So, the legend is created. Fribourg does not yet exist. Only one castle, that of the Dukes of Zähringen, is perched on the hill above the Sarine River. Charcoal workers, loggers and fishermen live in thatched cottages along a brush-covered river. Duke Berthold IV went hunting one day in the nearby forest and was surprised alone in the storm. Dressed in a simple way, without one being able to imagine in him a prince, he was lost alone, separated from his men, in the night under the storm. He spotted a flickering light. He went and knocked on the doorstep and the master of the house, a charcoal burner, offered him room and board. When he woke up, he found that his clothes were covered with soot on one side and floured on the other. Hell! The coalman had found nothing better to compose the stranger’s bed than to arrange two sacks of coal and cover them with a sack of flour. So, he swore to himself that it was necessary to build a city, to give freedoms to the charcoal burners and that the color of the flag would be that of the charcoal burner’s bed, black and white, which is still the flag of the canton today.

In the XIIIth century, the city passed into the hands of the Bernese Habsburg, then at the end of the XVth century under the rule of the Dukes of Savoy. After the battle of Morat, which saw the victory of the confederates and the Bernese over Charles the Bold, Fribourg asked to be admitted to the nascent Swiss confederation. It entered as the first semi-French canton in 1481. Then came the Reformation and its concert of incessant conflicts. The 13 Swiss cantons chose their side. But, in many regions, the cohabitation of the two confessions remained difficult most of the time. So, today you are crossing one of these microcosms between Fribourg Catholicism and Bern Protestantism. And here the situation is further complicated by language. This part of the canton of Fribourg speaks German and goes to mass.

Difficulty of the course: Today’s stage (+337 meters/-505 meters) has very reasonable slope variations. The slopes hardly exceed 10% inclination, except for the climb to the high plateau after passing the Sense River, and especially the flip flop on the Sarine River at often more than 25% slope in the city of Fribourg, in end of stage.

Today, the roads are still a little more numerous than the pathways: 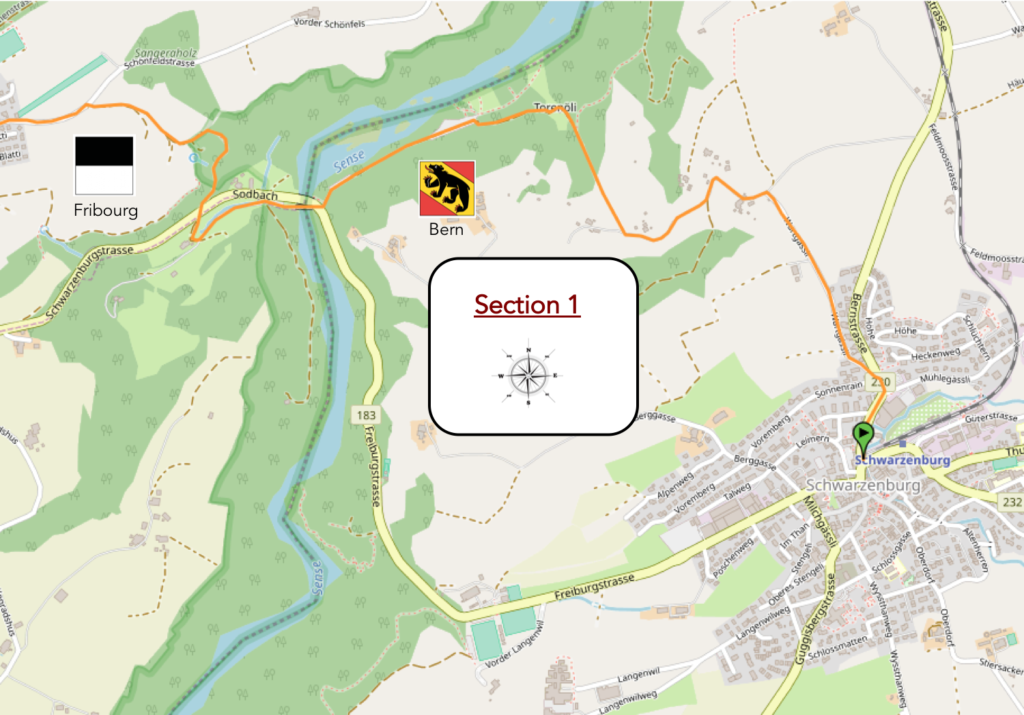 General overview of the difficulties of the route: course without difficulty, except for the descent on the Sense River. 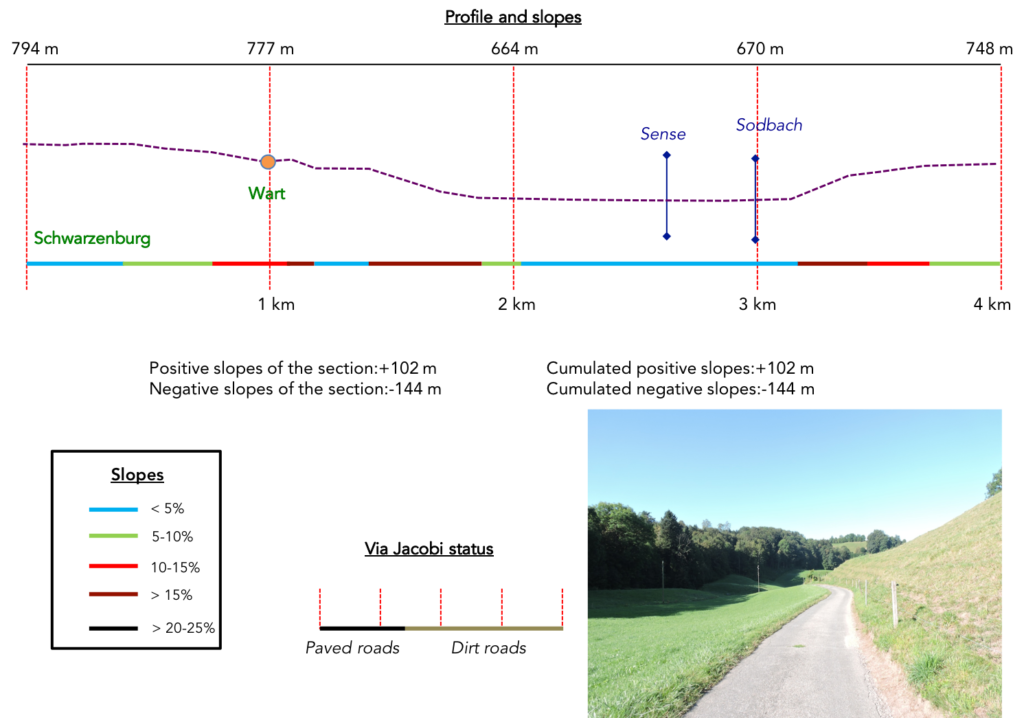 In Schwarzenburg, it is not the tracks that are missing on the signposts near the station. But beyond Bodensee you are always walking on Via Jacobi 4. 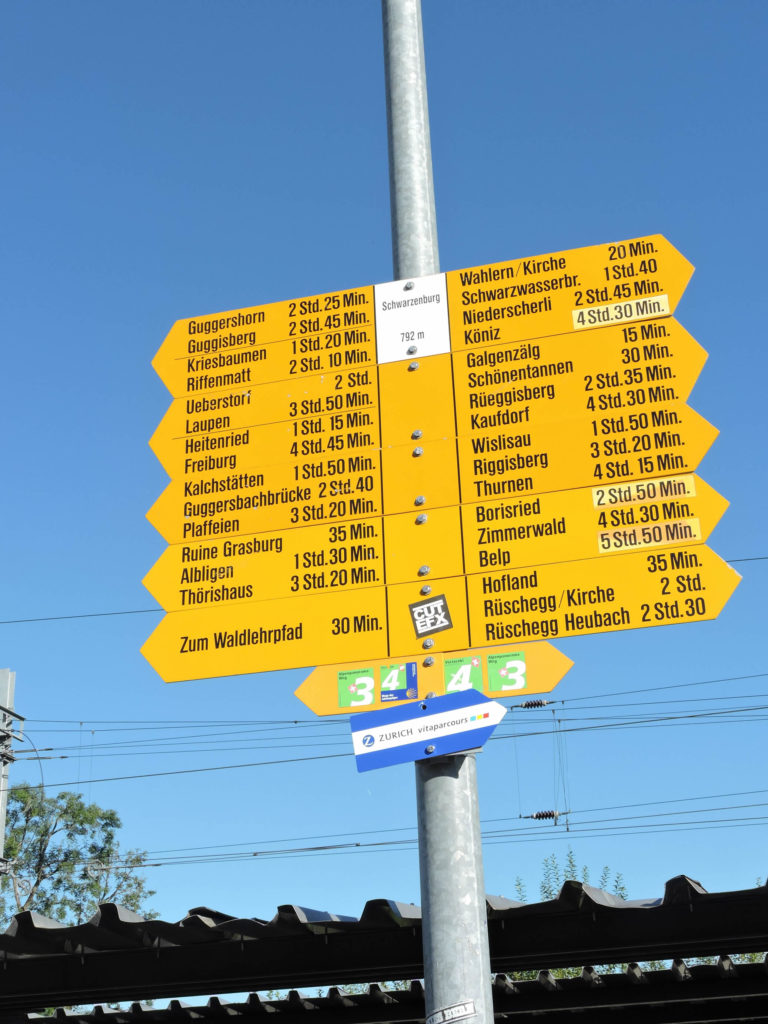 Here, it is very nice to remind the pilgrim that he is walking on the Camino de Santiago and that 1,700 kilometers separate him from Santiago. 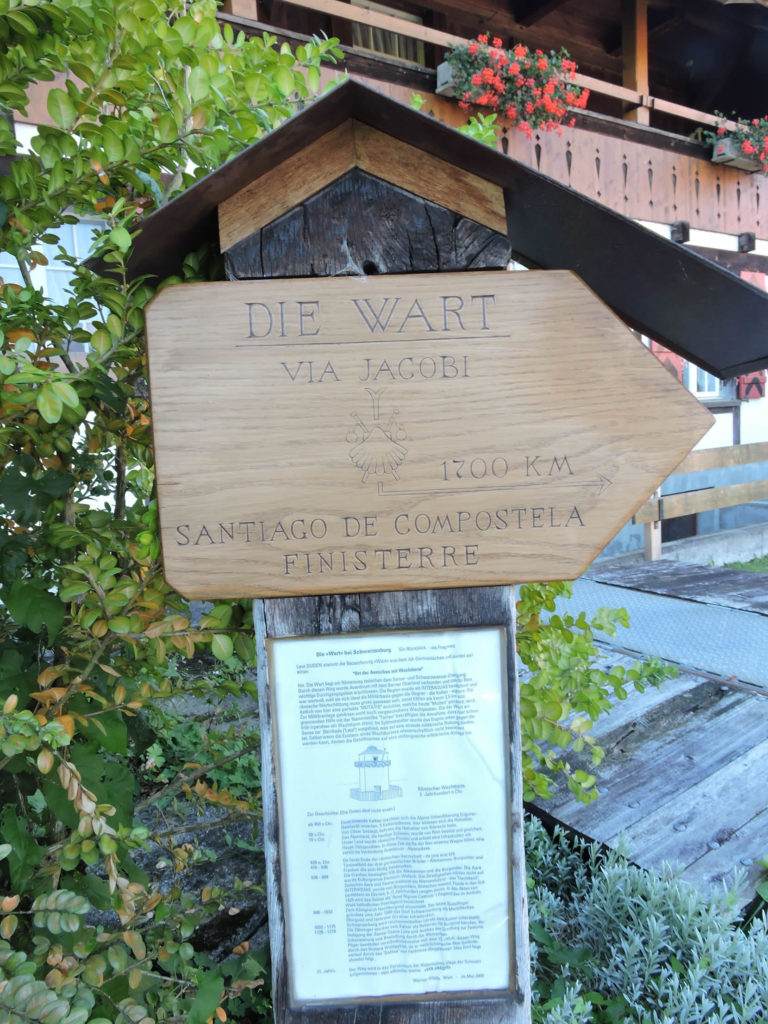 The countryside is bucolic at will, with its farms scattered in the meadows. 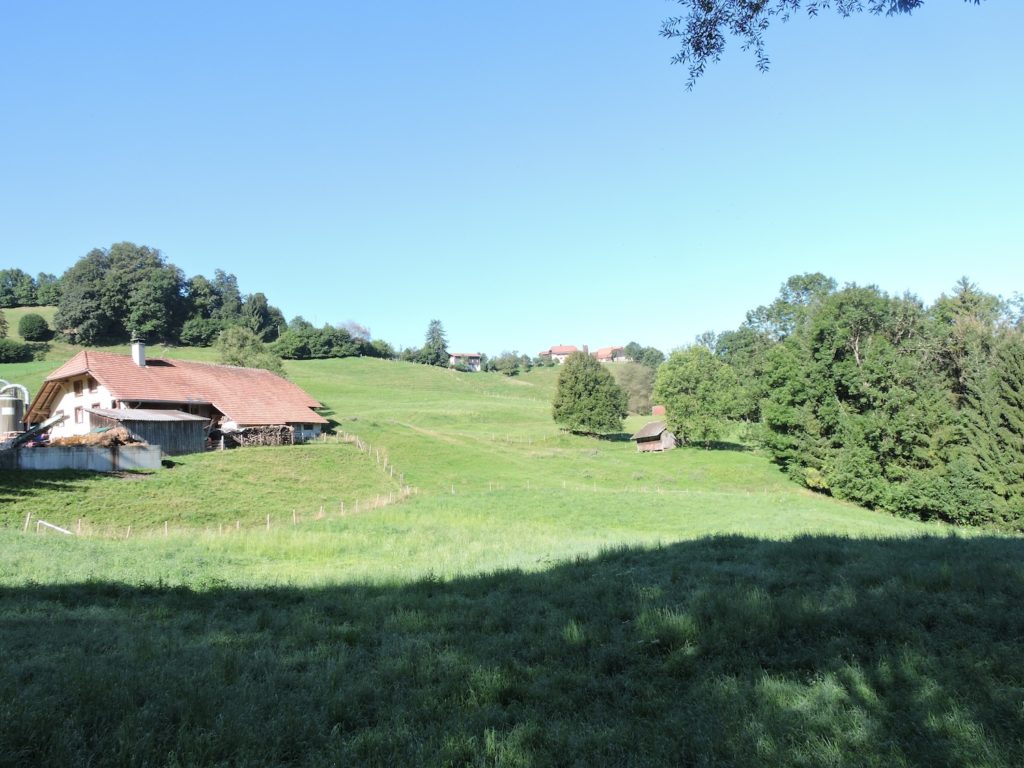 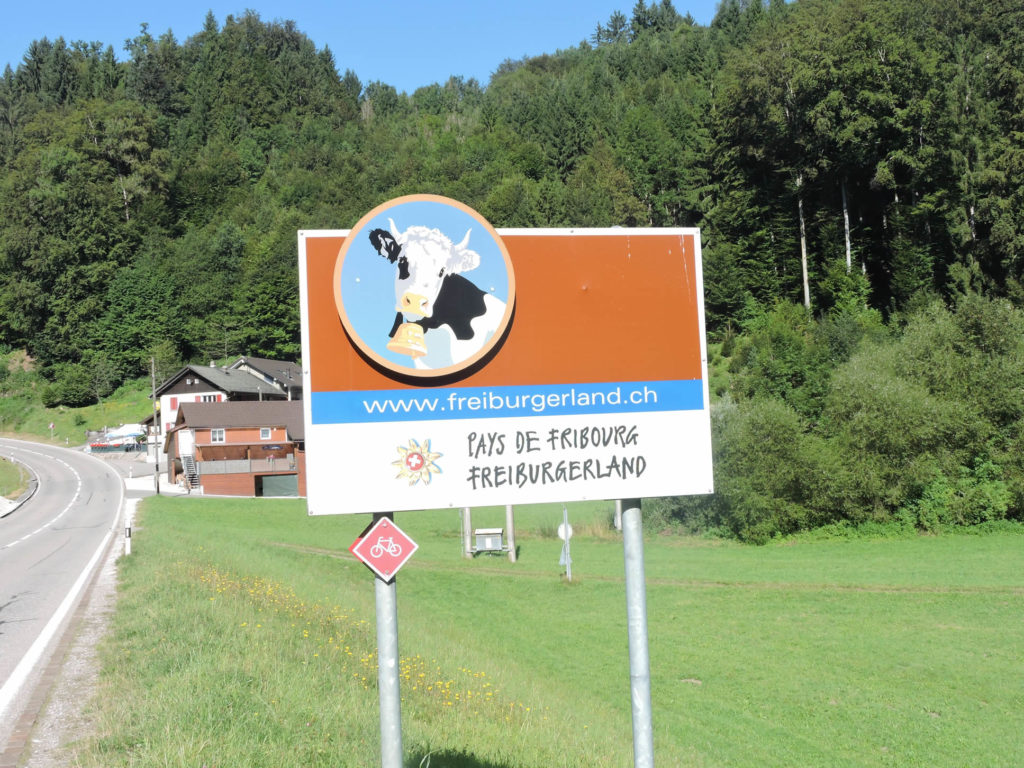 On the way a beautiful oratory stands at the edge of the way. The canton of Fribourg is a very Catholic canton. 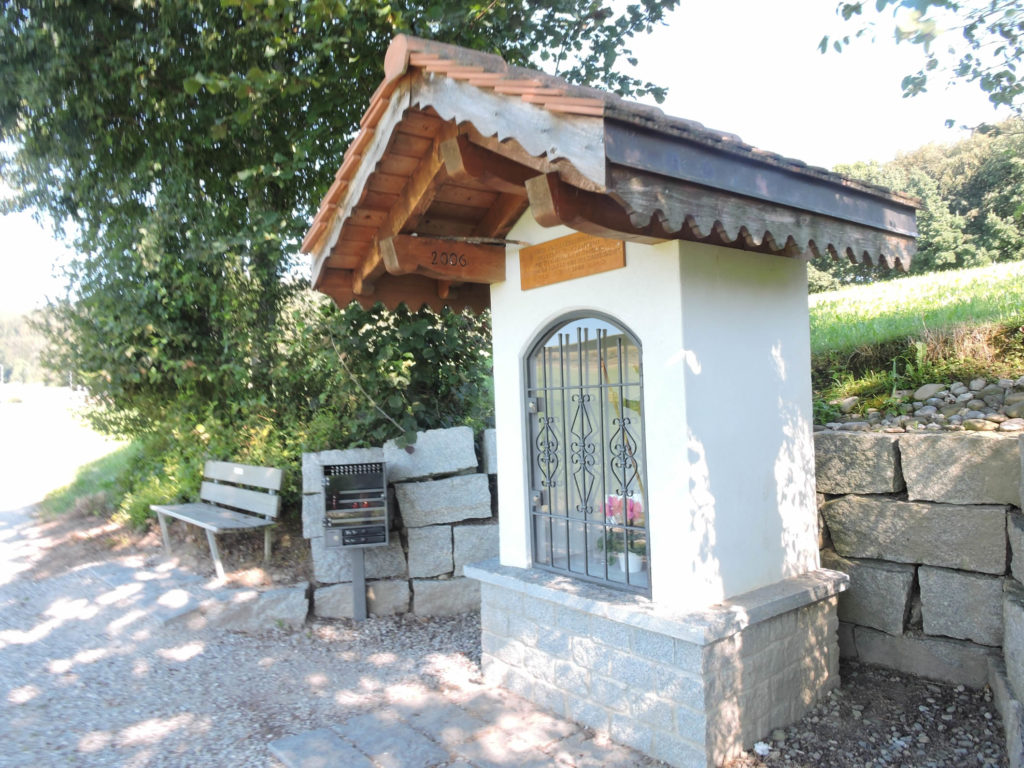 Section 2: In the Fribourg countryside. 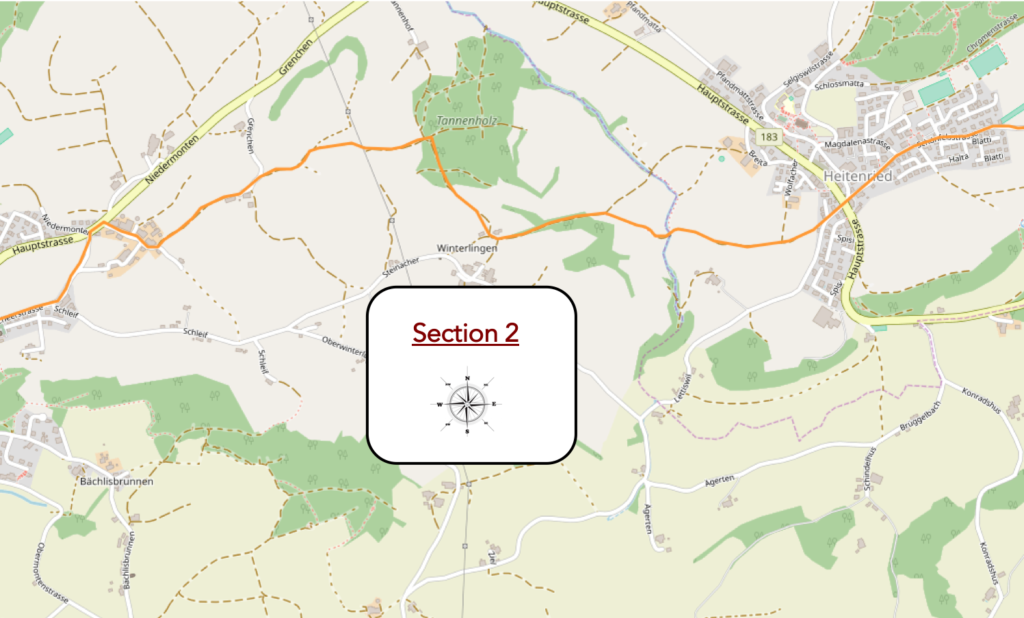 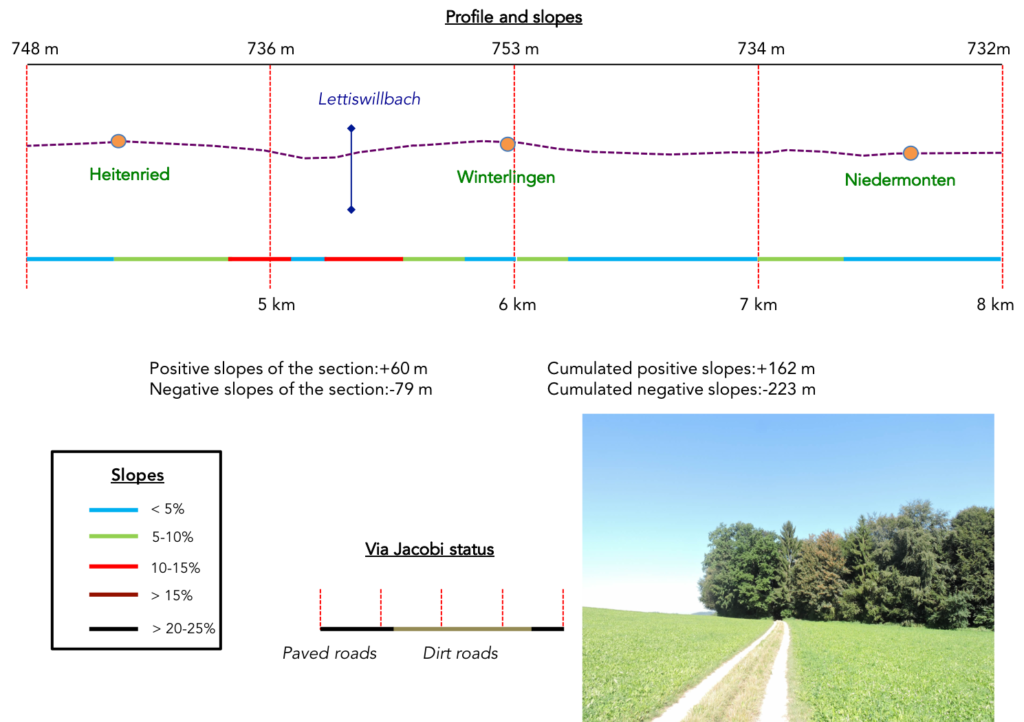 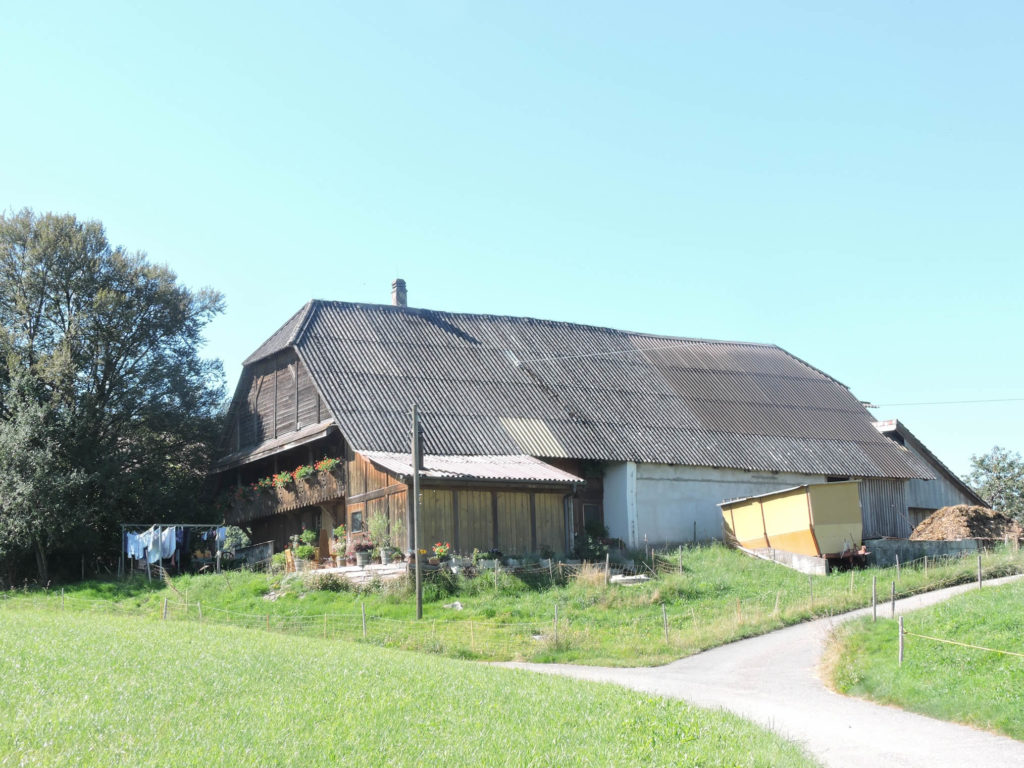 Section3 : Along the Taverna brook. 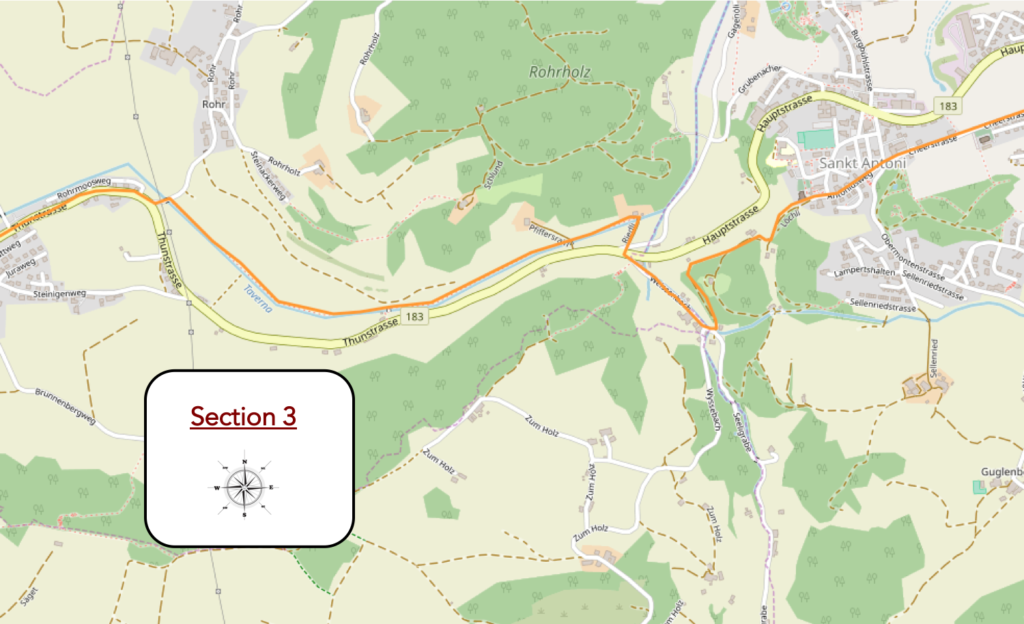 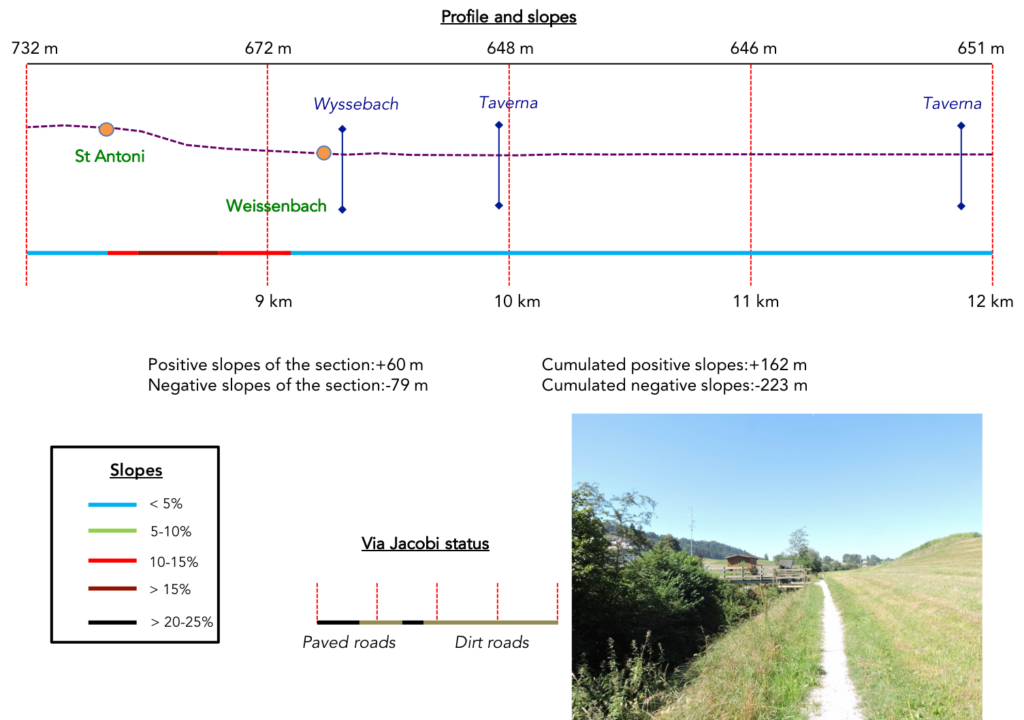 What more can we say about this little marvel that today serves as a guest house? 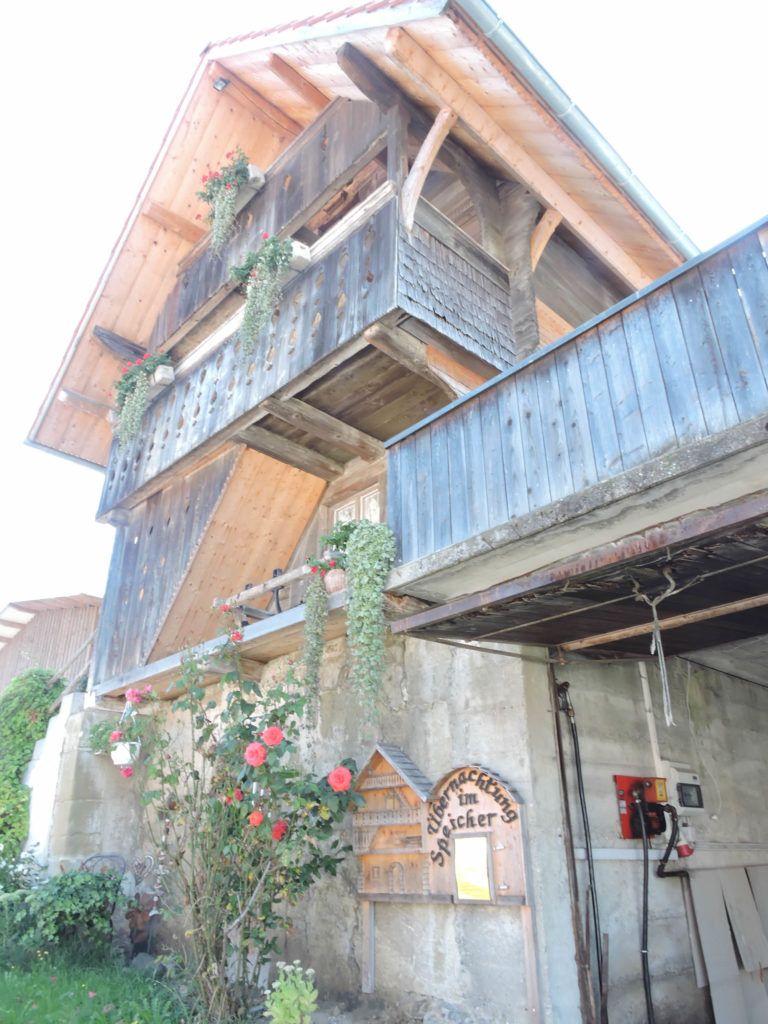 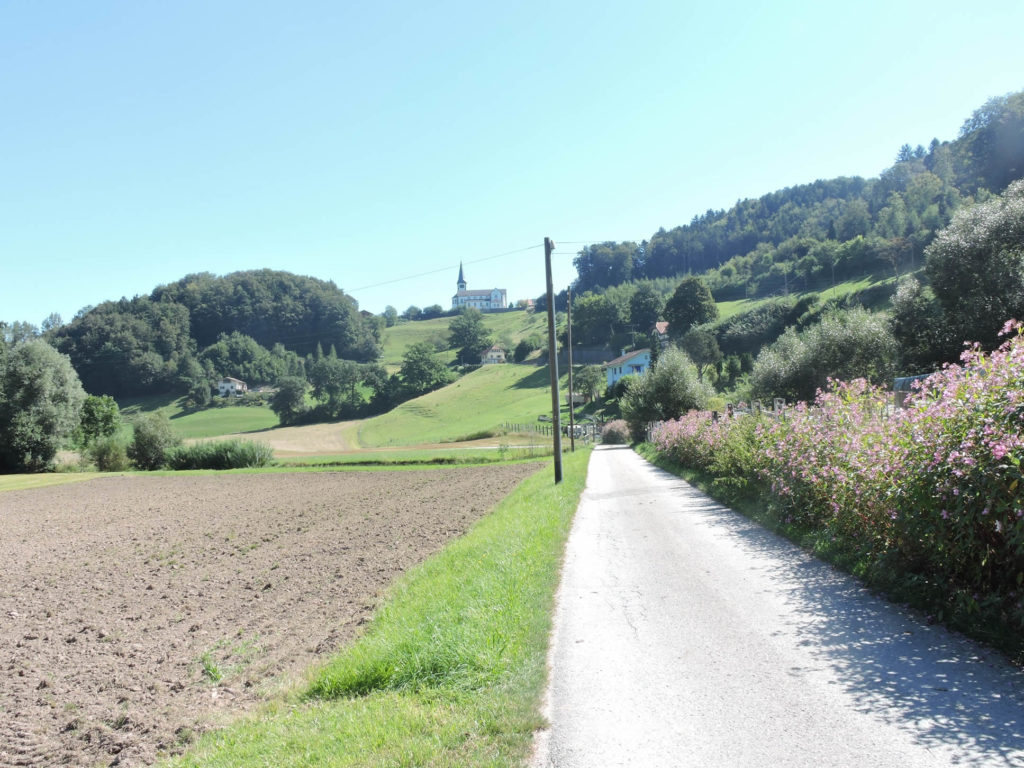 Section 4: Beautiful chapels before the return to the countryside. 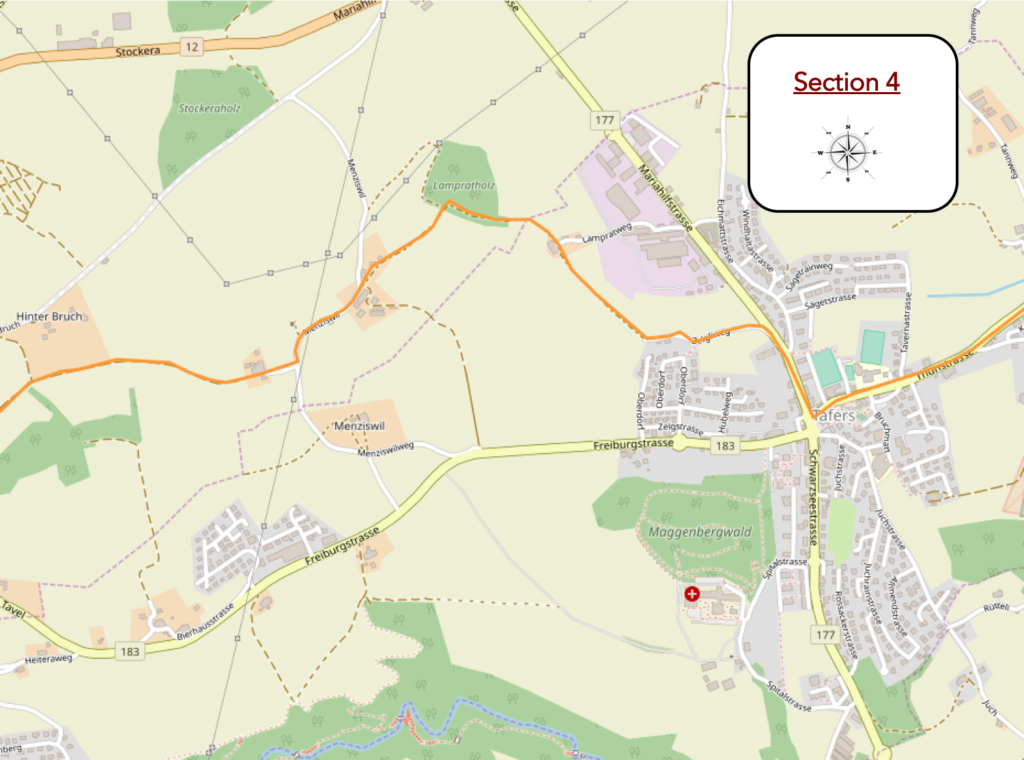 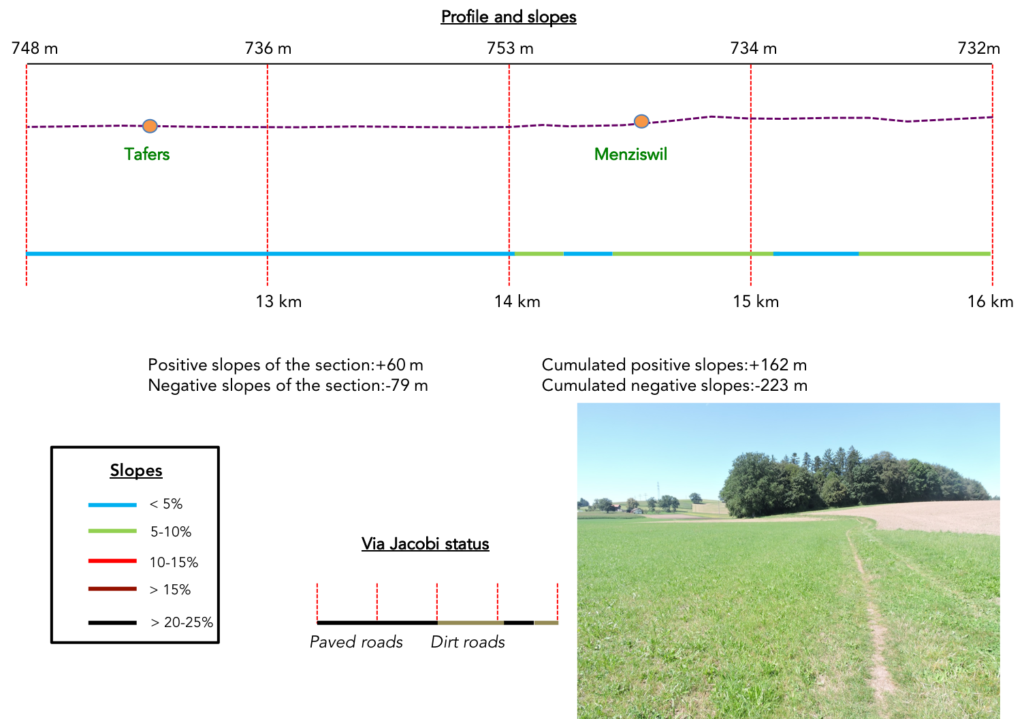 The city conceals a magnificent church dedicated to St-Martin. Originally, the sanctuary was Romanesque. Then there were transformations and enlargements in the late Gothic period, and finally in the Baroque period. The current church is a late Baroque reconstruction from the XVIIth century. Two chapels are attached to the church. 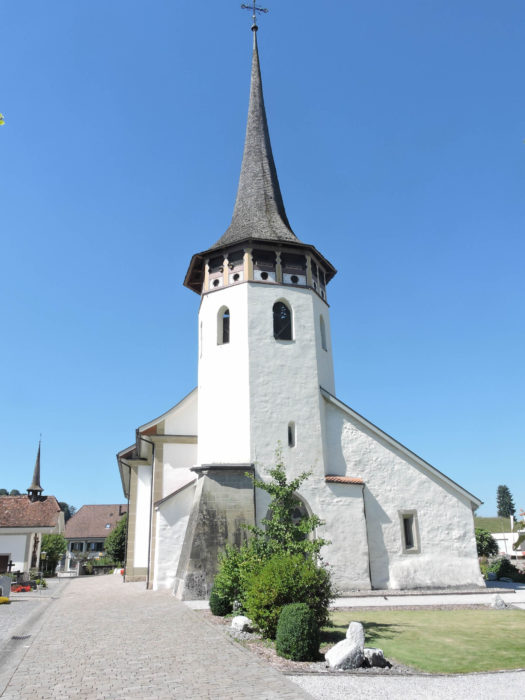 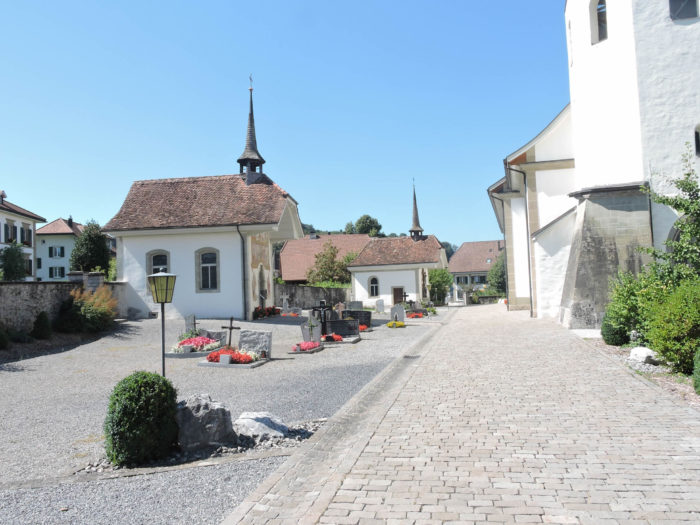 … including this extraordinary typical Fribourg house transformed into the Sense museum. 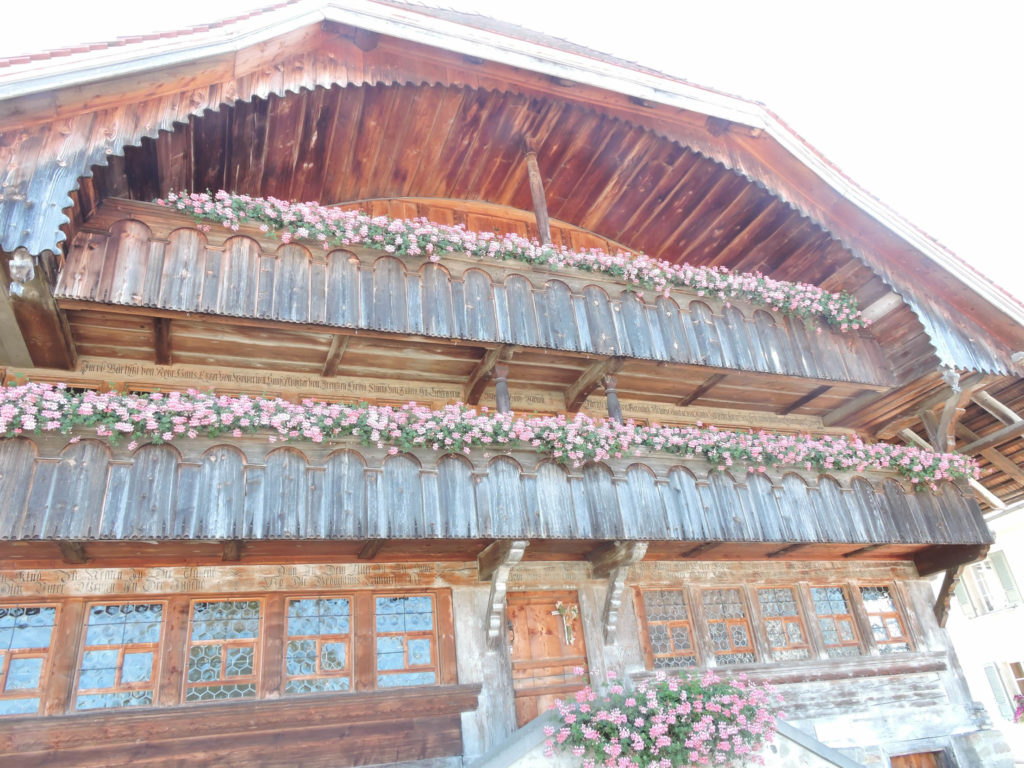 In this region, the farms are less opulent than in the canton of Bern, but are not devoid of charm. 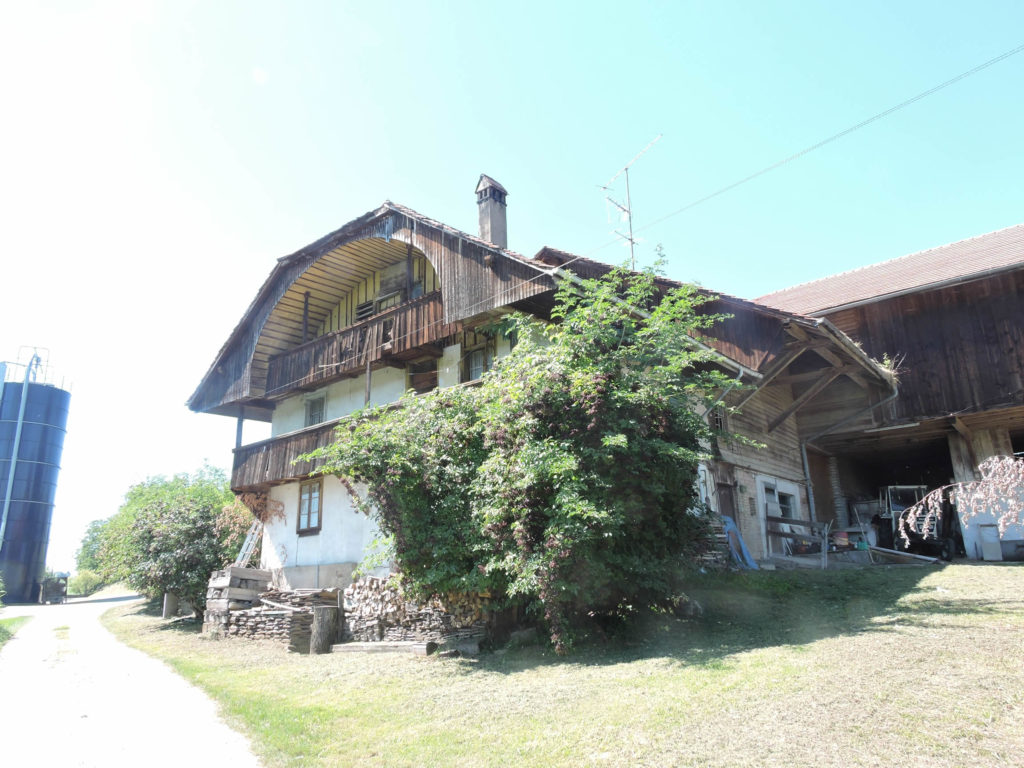 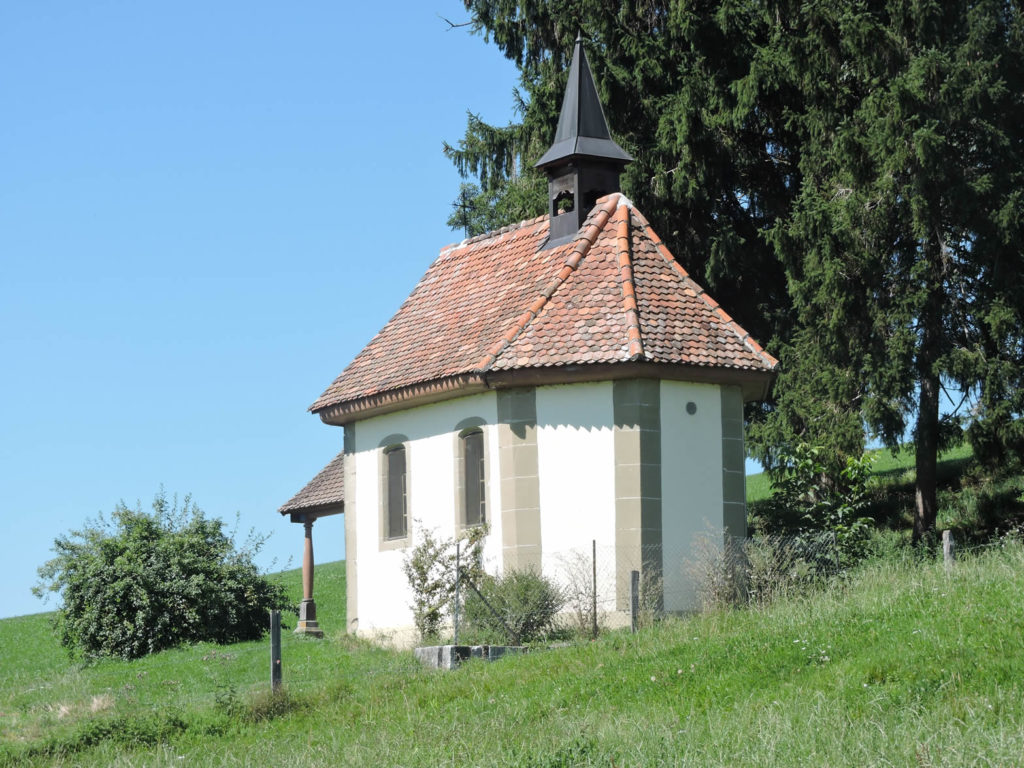 Section 5: On the way to the beautiful city of Fribourg. 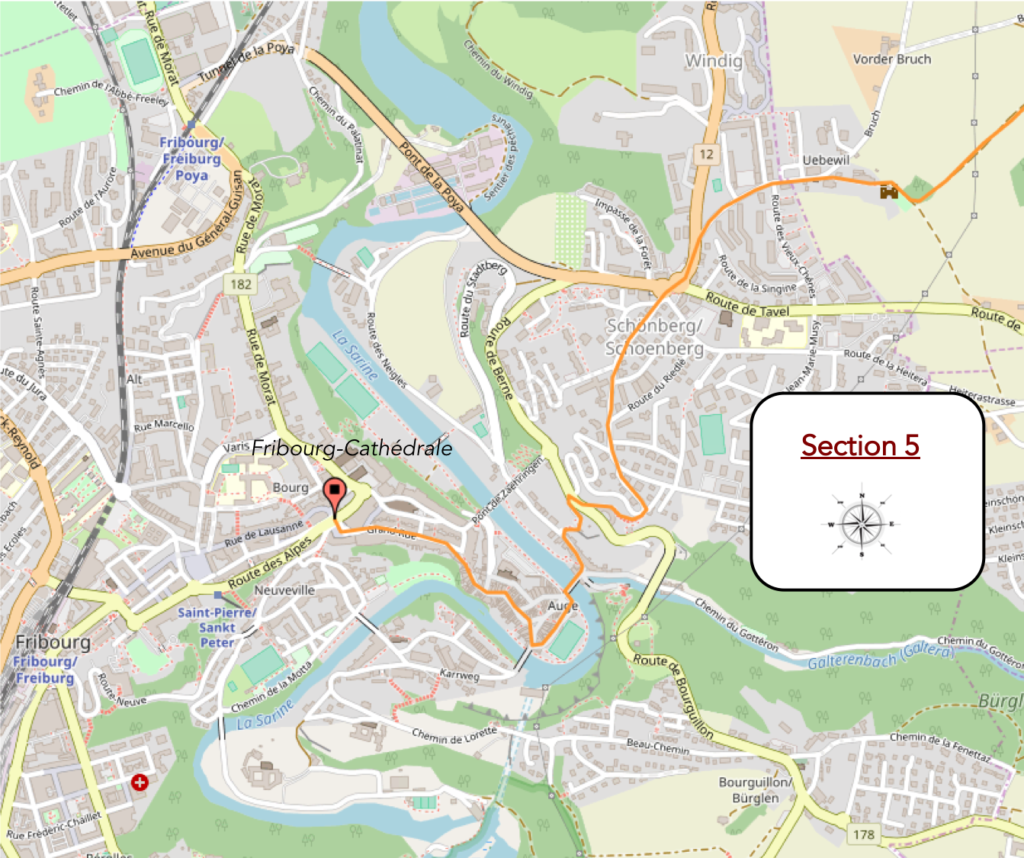 General overview of the difficulties of the route: steeply sloping route in the Old Town of Fribourg. 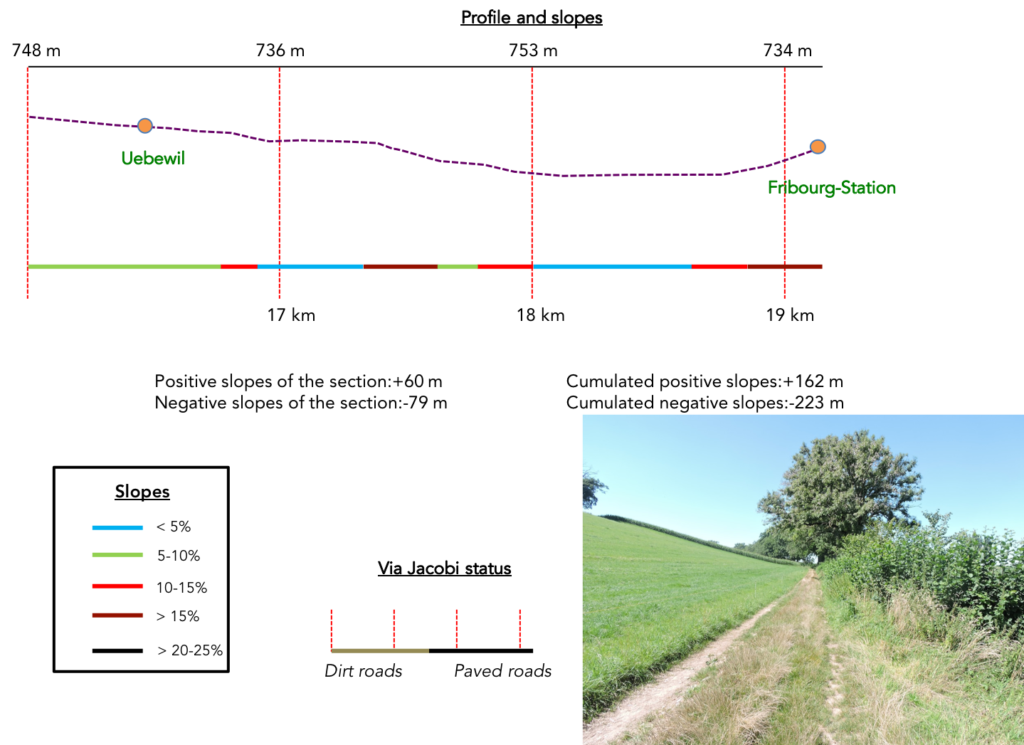 A magnificent patrician house marks the entrance to Villars-les-Joncs. The house belongs to a very famous aristocratic family in Fribourg. 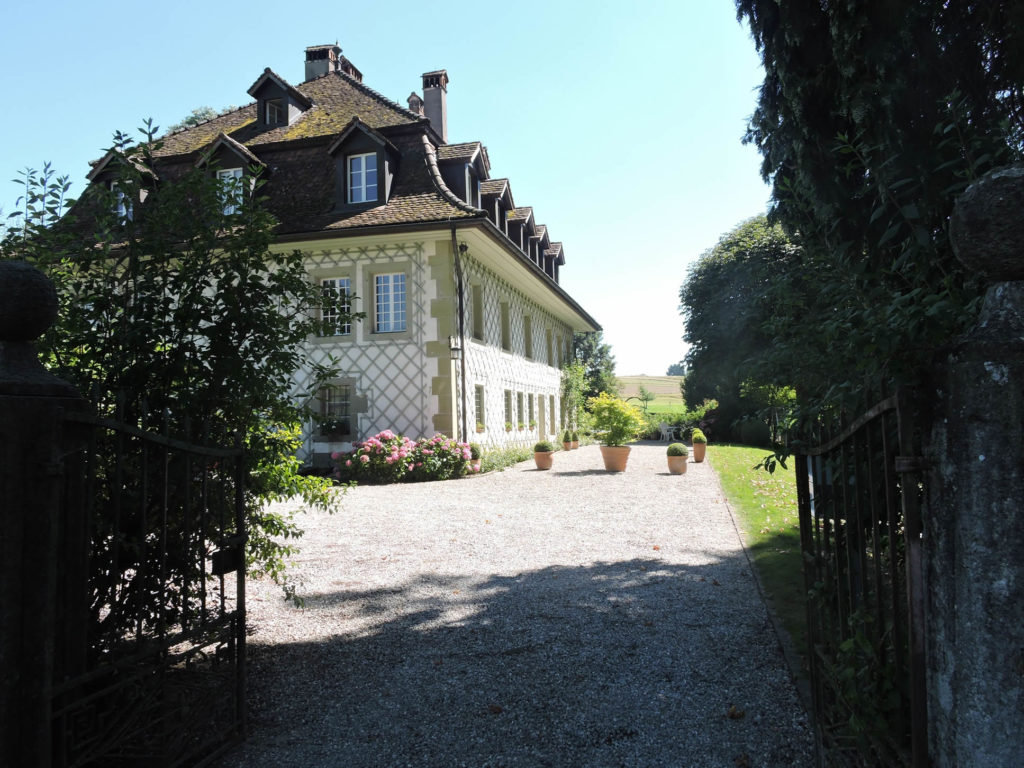 The Red Tower dates from the middle of the XIIIth century. It is the oldest and most monumental of the fortified towers of Fribourg. Until 1848, it served as a prison and a place of execution. 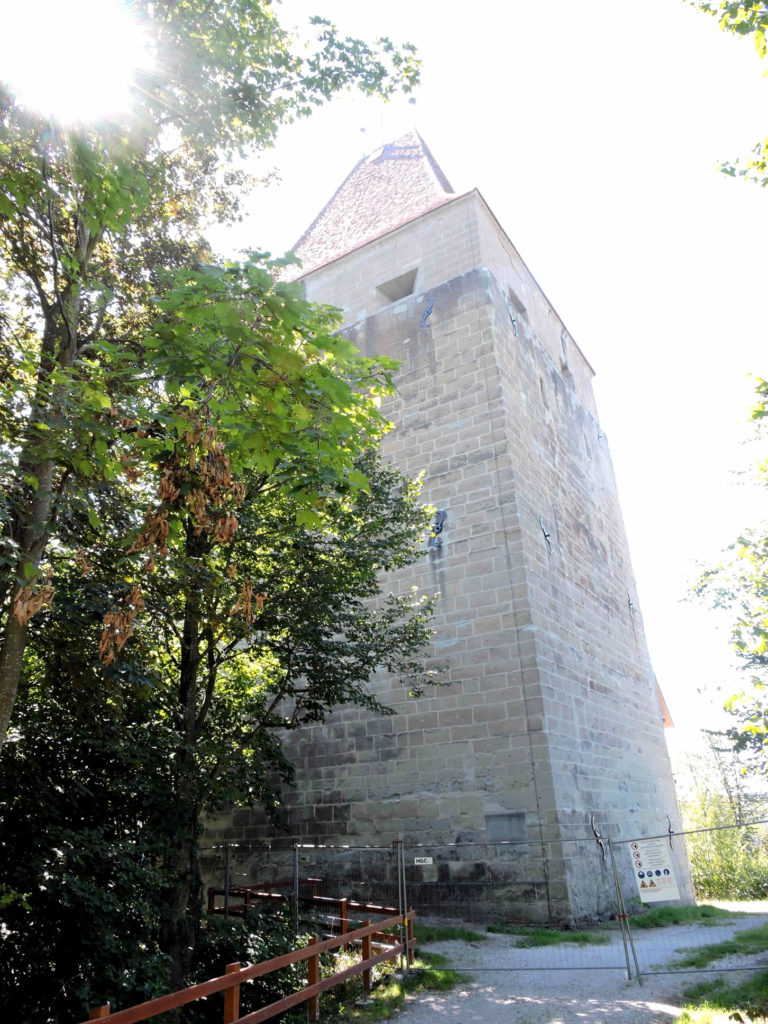 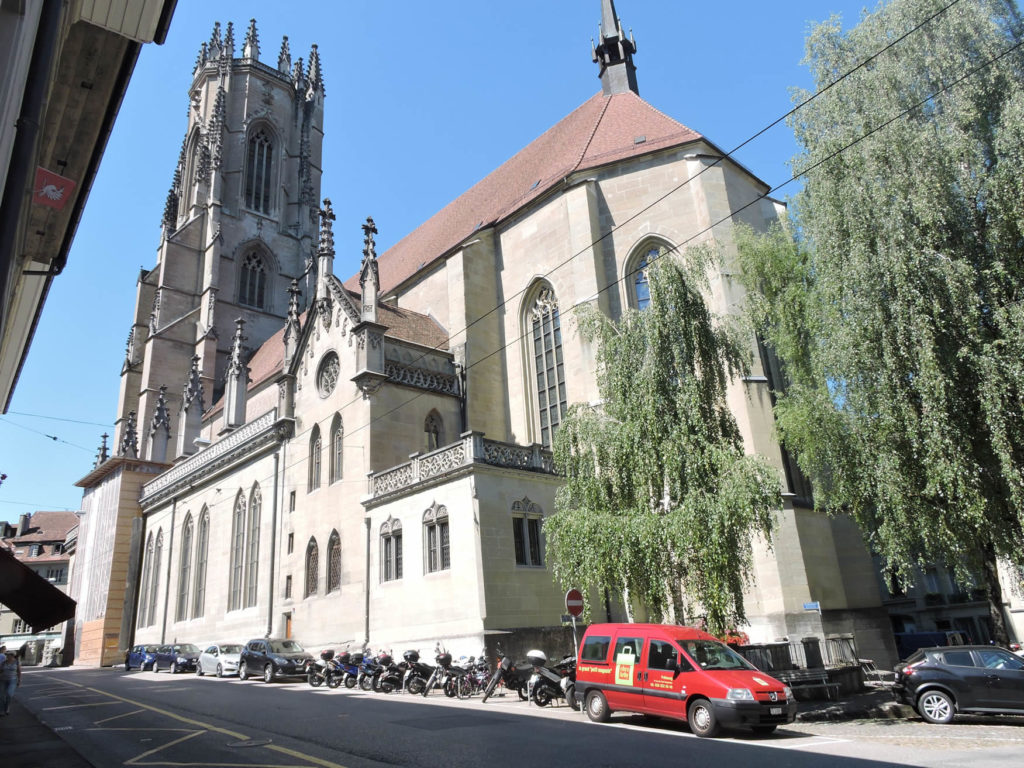 Adjoining the cathedral, the famous Rue des Epouses (spouses) here slopes down to the Grand Rue. 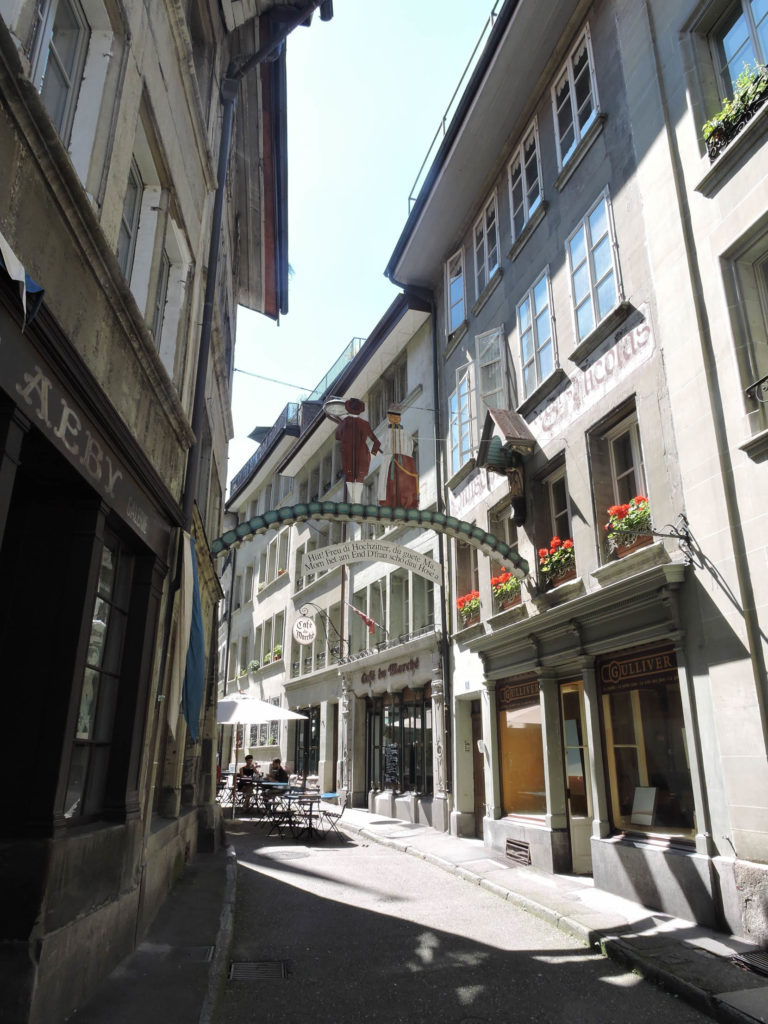 Next stage: Stage 14: From Fribourg to Visit of Old Town Fribourg