On the gentle mountains of Toggenburg 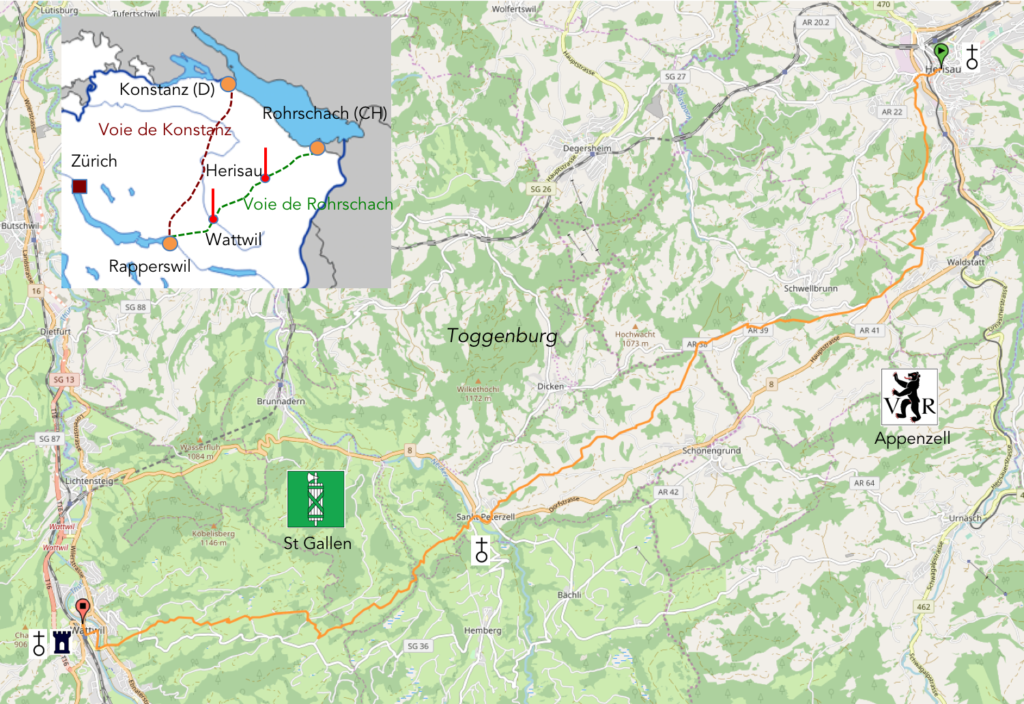 Today you’ll continue to cross the hills of eastern Switzerland. The route crosses the very hilly landscape of the cantons of Appenzell Outer Rhodes, then Toggenburg in the canton of St Gallen until reaching Wattwil. These regions are the heart of yodeling, this primitive and astonishing form of singing, which is gutturalized solo or in a group. In Appenzell Inner Rhodes it is called Rugguusseli, in Outer Rhodes Zäuerli, and in Toggenburg Johle. It sings, right? Finally, singing is a way of saying it, because many of the region’s yodels, including that of Urnäsch in Appenzell, are rather haunting, like melancholy thoughts coming out of the glottis. They are in fact vowels and sound syllables, where you pass without transition from the body voice to a head voice (falset), by the blow of the glottis. The melody of the first yodeler is often accompanied by a multi-voice improvisation by the other singers. Be that as it may, yodel, rustic and angular, remains well integrated and rooted in the culture of the mountains. Austrians and Bavarians also practice yodeling, which is often fast and cheerful. The Swiss prefer the slower, more continuous, often more melancholic yodel. The yodel, it is sometimes called youtse, especially in French-speaking Switzerland. 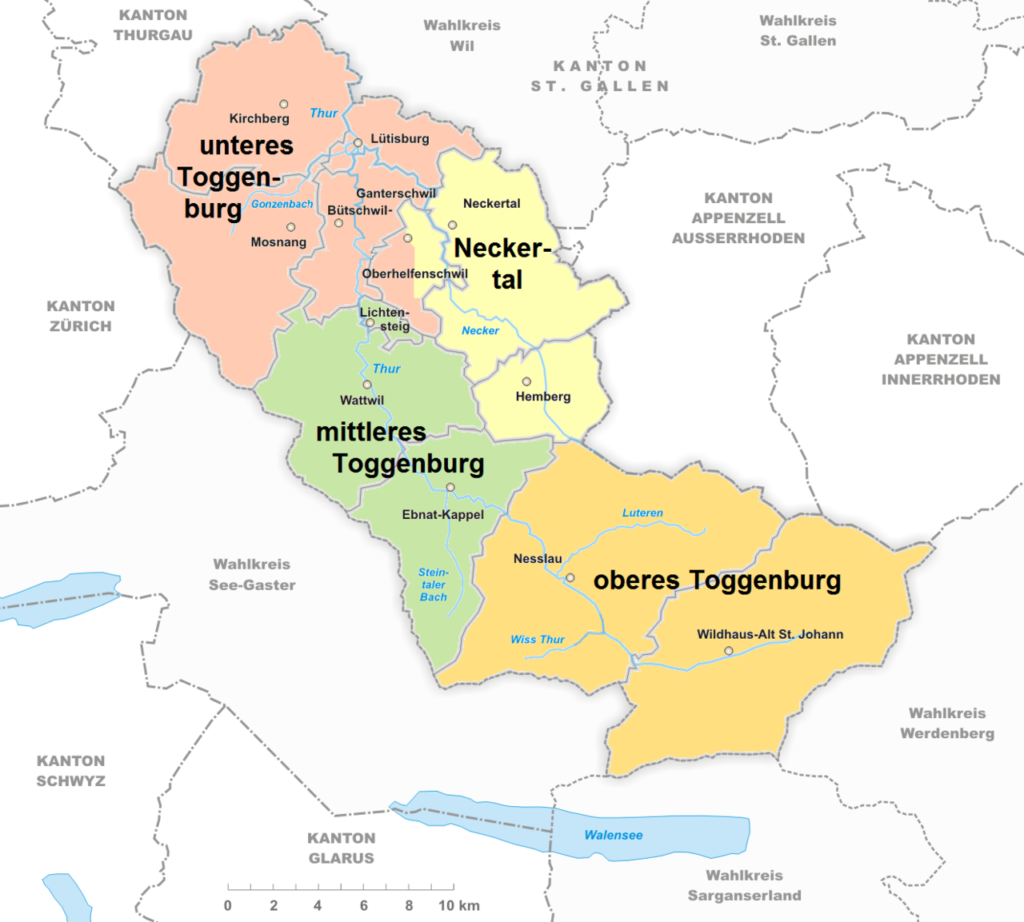 Hills and deep valleys with wide forests leave their mark on the landscape. The route leaves Herisau to first reach the heights of Toggenburg. It passes, between undergrowth and meadows, near many beautiful Appenzell and St. Gallen farms. At many points, a magnificent panorama of the entire region is offered to the eye, in good weather, especially over the Säntis mountain range. The route also passes further into the sumptuous Neckertal at St Peterzell, its convent and its magnificent bourgeois houses with decorated facades.

It is also the land of shingles’ manufacturers, craftsmen becoming increasingly rare. But it is still and above all, with Appenzell, the country of the herdsmen, with their songs, their costumes, their climbs to the mountain pastures and their cheeses, the quintessence of Switzerland. In these regions where the heart of authentic Switzerland is still beating at full speed, you may have the leisure, if you arrive at the right time, to taste the rustic charm of local customs, whip crackers, bell ringers. On the musical level, how not to give in to the spell of the Talerschwingen, where a coin is rolled in a bucket to accompany the yodel, to the zither of Toggenburg, an instrument without notes and without sheet music, or even to the hackbrett, a kind of table zither, in fact a “chopping board”, as the etymology of the word says. On weekends, you may sometimes hear the alphorn sounding, which is no longer used today to communicate remotely from one valley to another, to bring the cows to milking or to call the villagers to the church.

The farms are very scattered in the country, with very beautiful residences in the high valleys of the Thur and the Necker. Livestock farming and especially cheese are made there. Toggenburg is the main producer of Appenzeller cheese. Here are also produced other chesses, sbrinz and tilsit. And then, you might enjoy the country’s queen sausage, the Schüblig, a sausage made from veal or pork

Difficulty of the course: The journey takes place on very substantial slope variations (+871 meters / 1023 meters). It is one of the most difficult stages of the Camino de Santiago in Switzerland, not because the route is technically difficult, but because the slope is omnipresent throughout the journey. The first part of the route is almost constant uphill, with slopes sometimes greater than 15-25%, with also some ups and downs, until you reach Landscheide, the boundary between the cantons of Appenzell and St Gallen. The descent is quite tough to reach Sankt Peterzell in the Neckertal. From here, the route climbs between meadows and undergrowth to Scherrer on the heights of Wattwill. The descent to Wattwill is very demanding.

In this stage, courses on tarmac are inferior to courses on pathways, and pathways often use meadows:

Section 1: A steep climb through meadows and forest to the Hörnlipass. 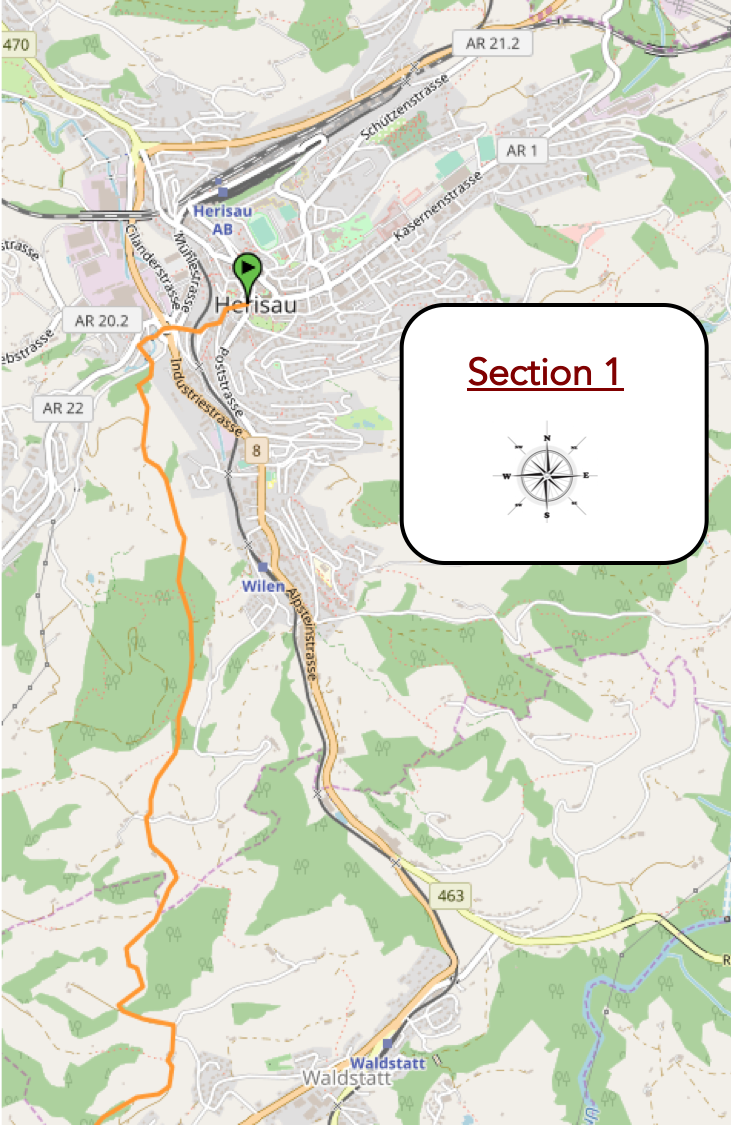 General overview of the difficulties of the route: tough and constant slopes, with a vertical drop of more than 200 meters in less than 3 kilometers. 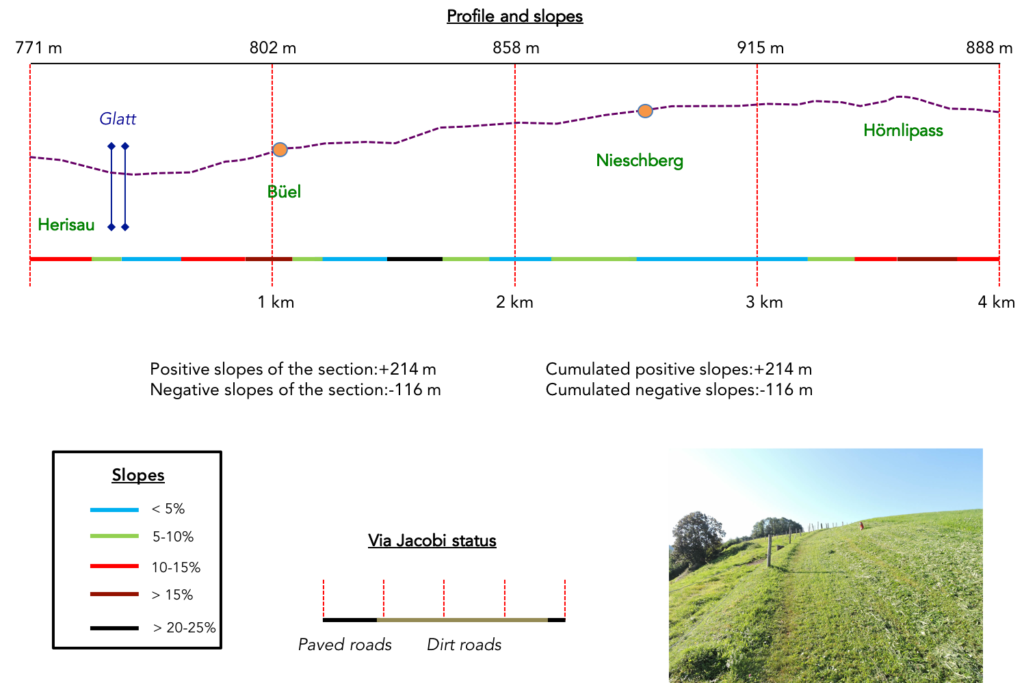 A bench, life-saving for some, shall we say, awaits the walker at the top of the hill, under a large oak tree. You have only climbed 150 meters in altitude since crossing the Glatt River. But 150 meters over 2 km is not negligible! 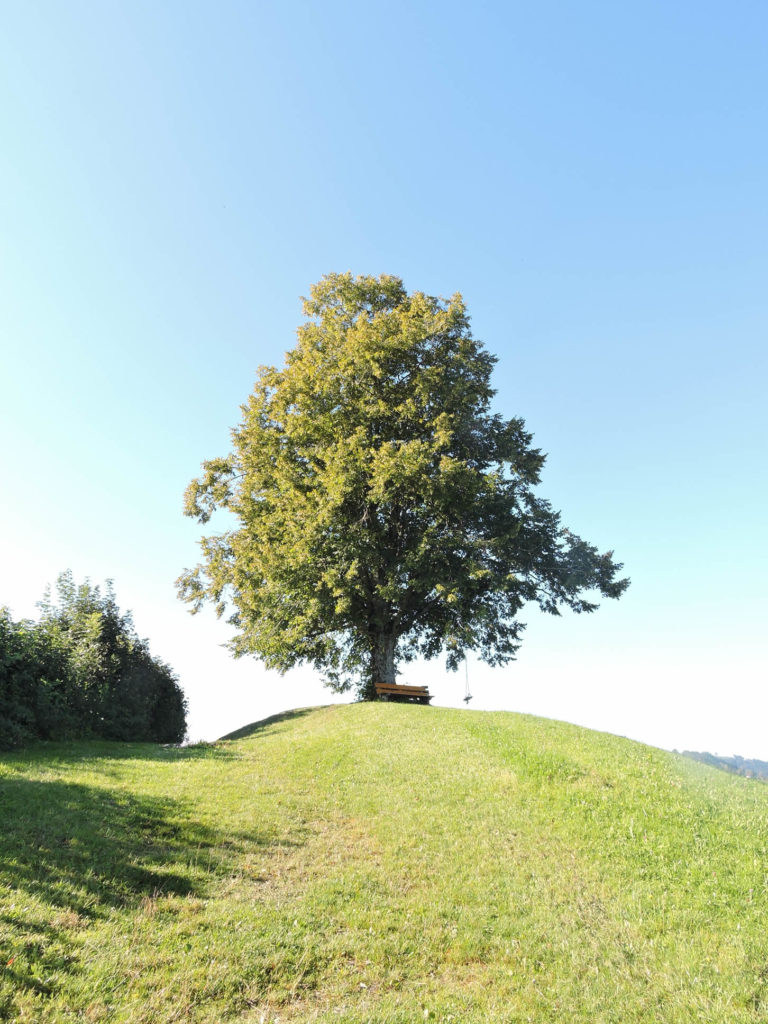 The road then reaches the Hörnli pass. We say pass here, because the small road slopes down the other side of the hill. 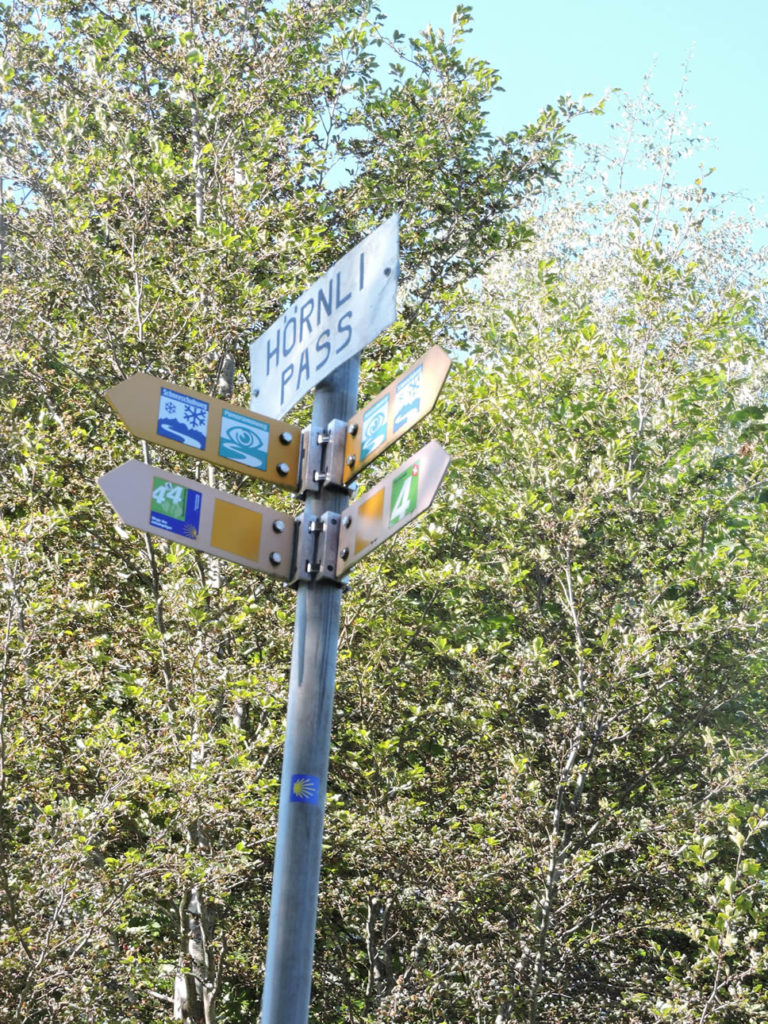 Section 2: Can you guess the Säntis mountain 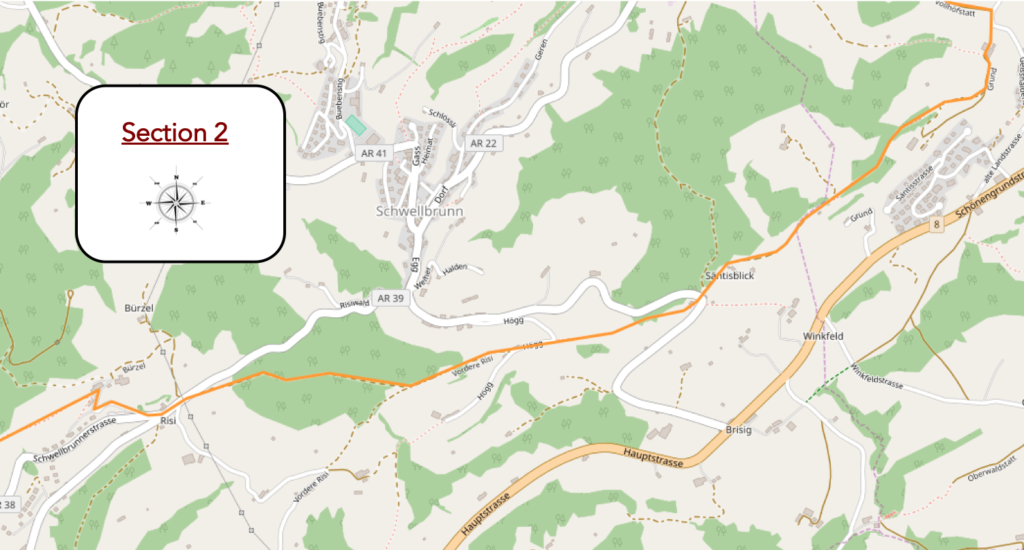 General overview of the difficulties of the route: leg-breaking course, with tough ups and downs. 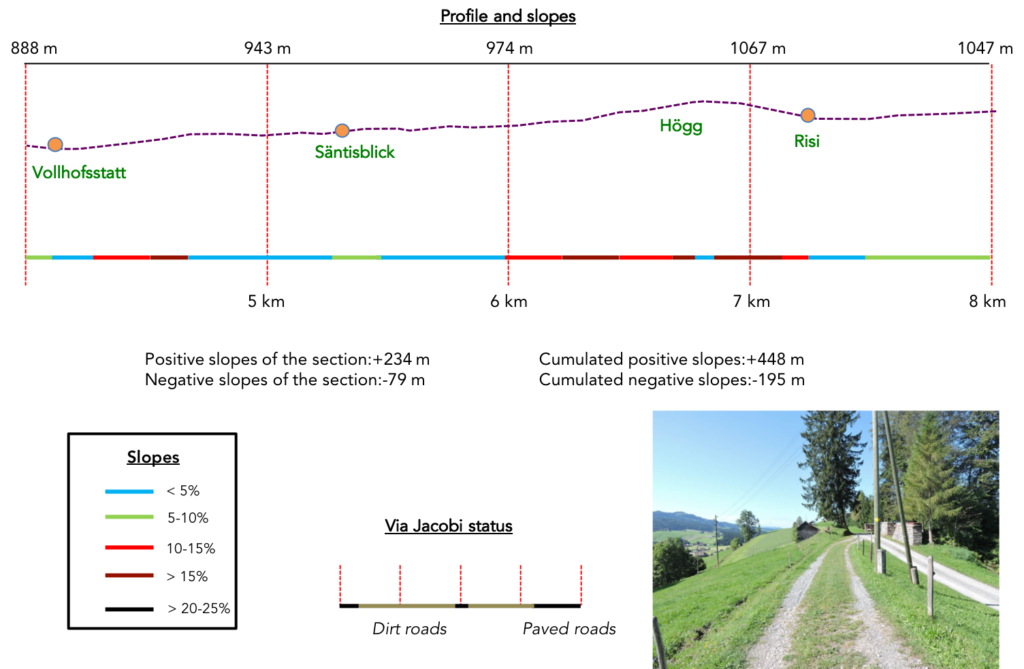 Here, Via Jacobi slopes up the paved road towards the hill. Here you will come across a direction sign giving you a pathway through the meadows. But that’s it! Usually, on the track, you open the electric barrier, and you close it after passing. But here, there is none! So, you will have to sneak under the wire, if the cows are present. Everywhere, the peasants make the law. Cows first! For three pilgrims who pass here! 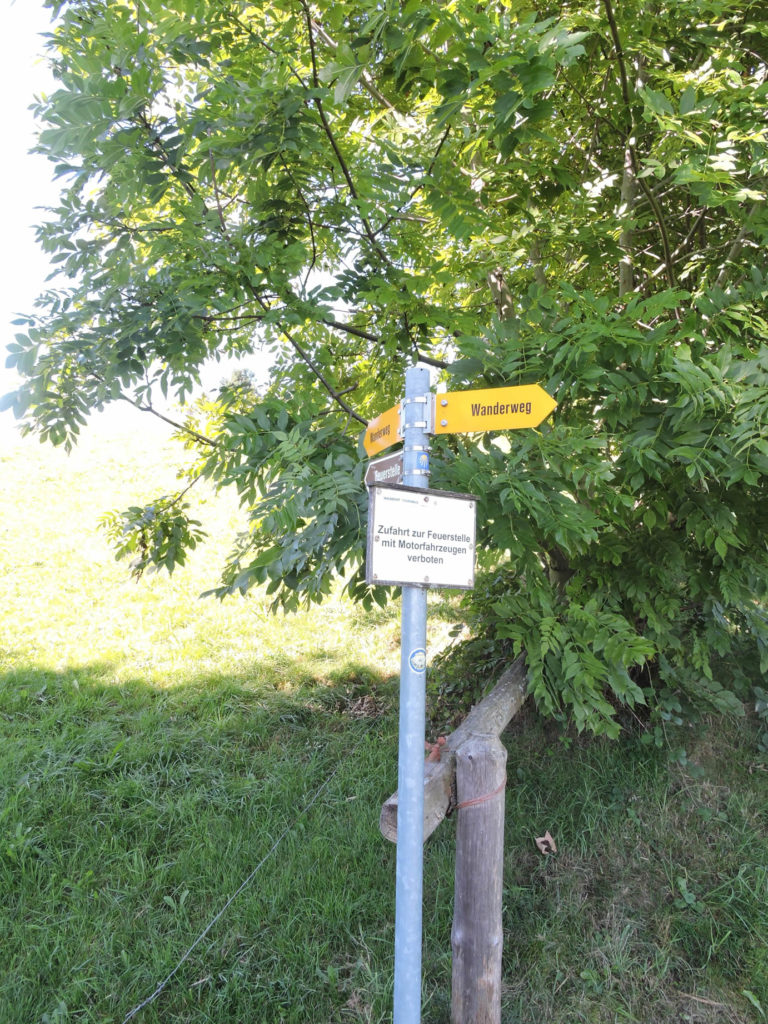 So, if this happens to you too, you can also climb up to the farm by following the road, then join, on the right towards the forest, the pathway that runs over the ridge.

Blick signifies view. This region is so named because you can see opposite, to the south, the Säntis mountain range, which dominates the Appenzell Prealps.Säntis Mountain, straddling the two cantons of Appenzell and St Gall, culminates at 2,500 meters above sea level. 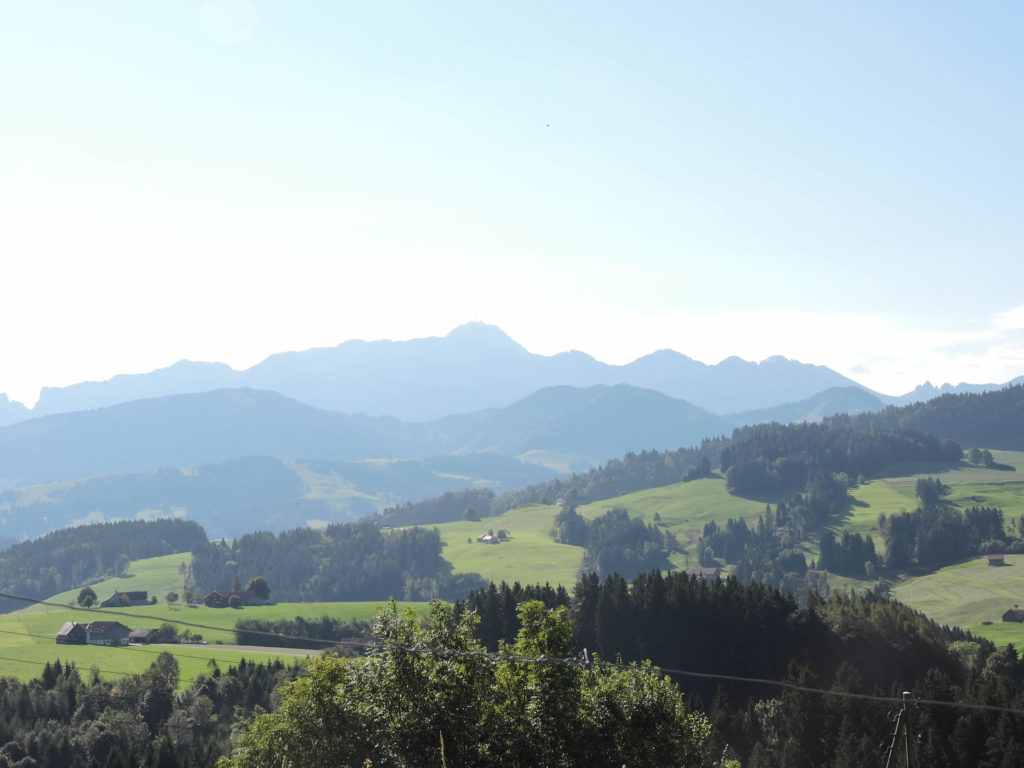 Then, the pathway slopes down quite steeply into the beech forest, sometimes with slopes greater than 25%. 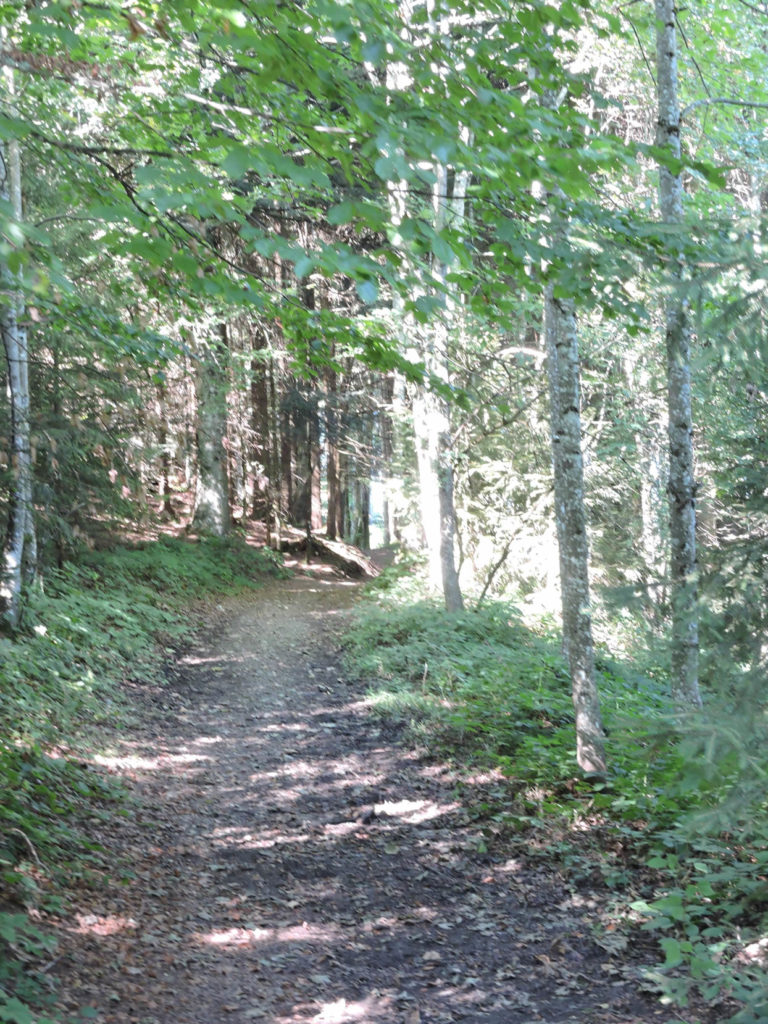 Section 3: Passing through Chäseren, restaurant of pastures and high hills. 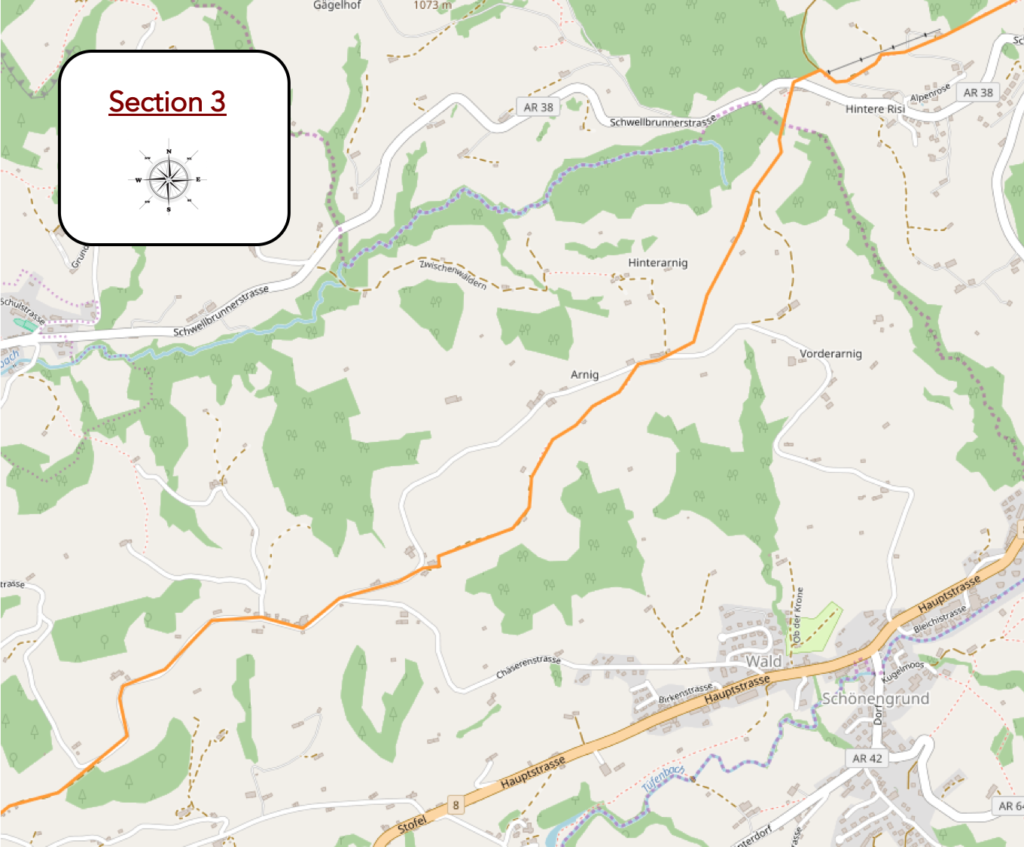 General overview of the difficulties of the route: route mainly downhill, but not easy, with sometimes pretty slopes, especially if you climbed above Risi. 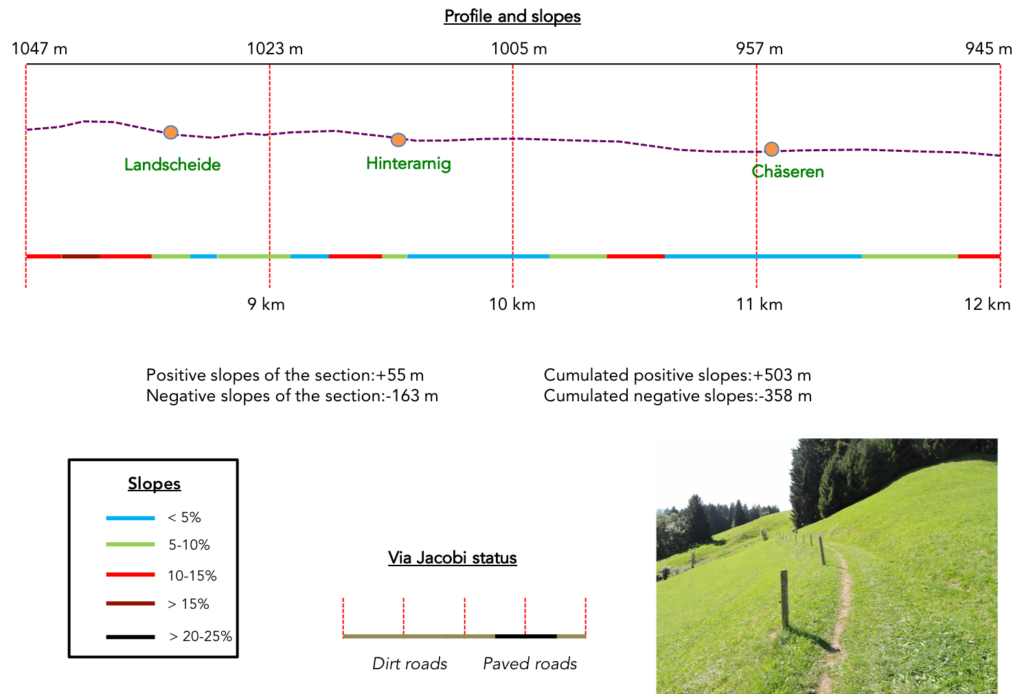 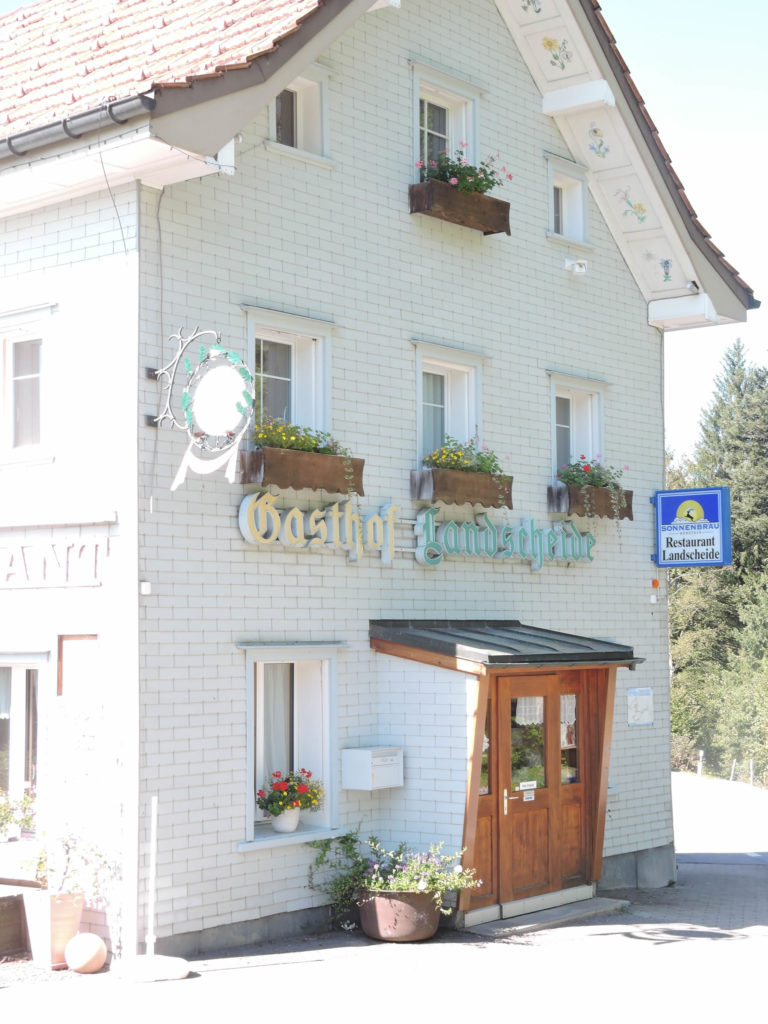 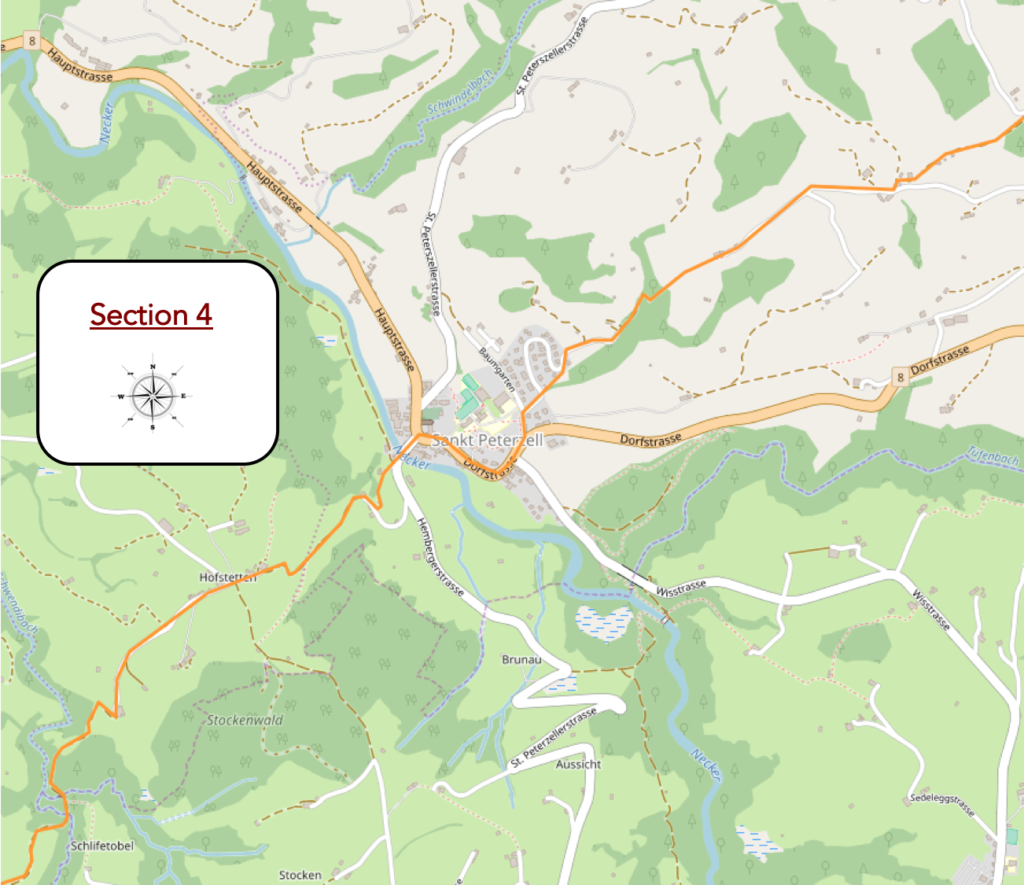 General overview of the difficulties of the route: a real gymkhana, with very severe slopes, awaits you to descend into the Neckertal and come out of it. 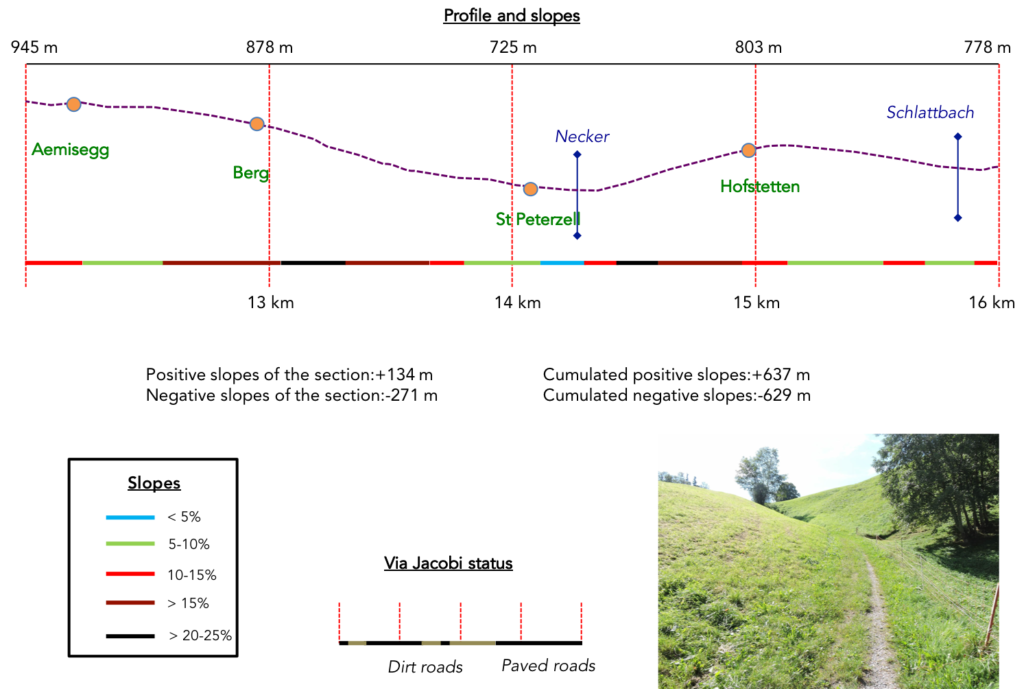 It runs in front of the very beautiful Zum Bädli house. Today private, this extraordinary house, in Baroque and Rococo style, erected in the XVIIth-XVIIIth century, once served as accommodation for pilgrims. 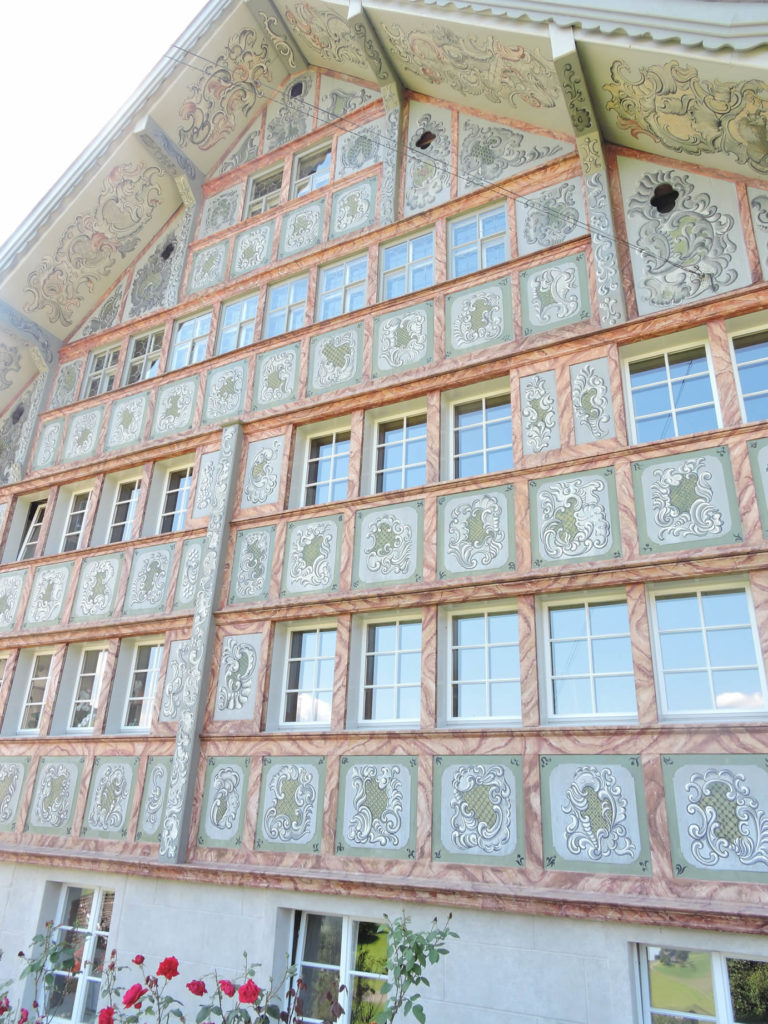 Section 5: A few more yoyos in the Toggenburg countryside. 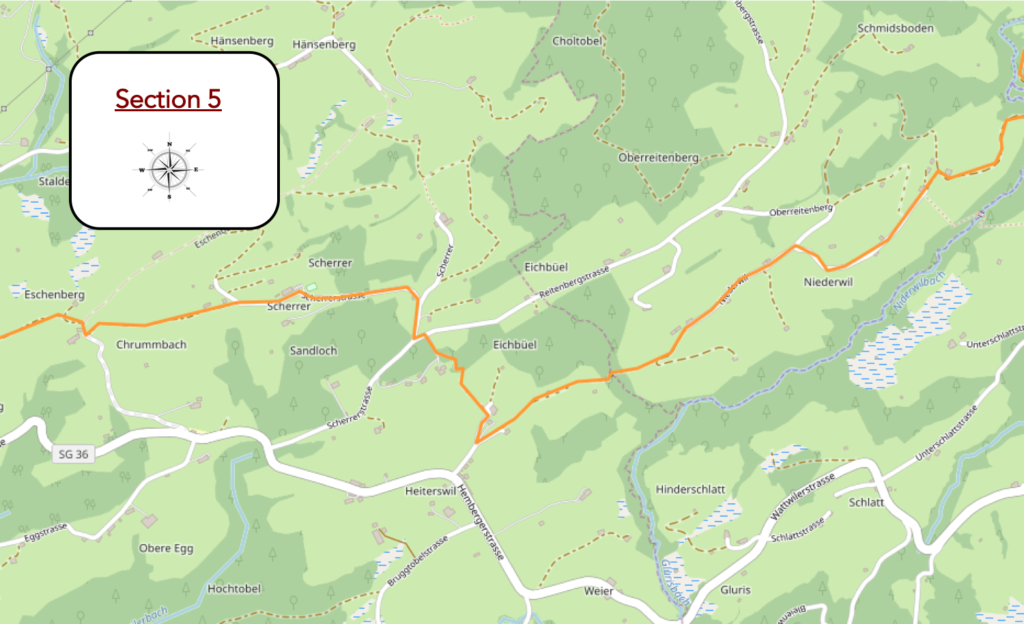 General overview of the difficulties of the route: the gymkhana continues, often with quite tough slopes, almost always uphill. 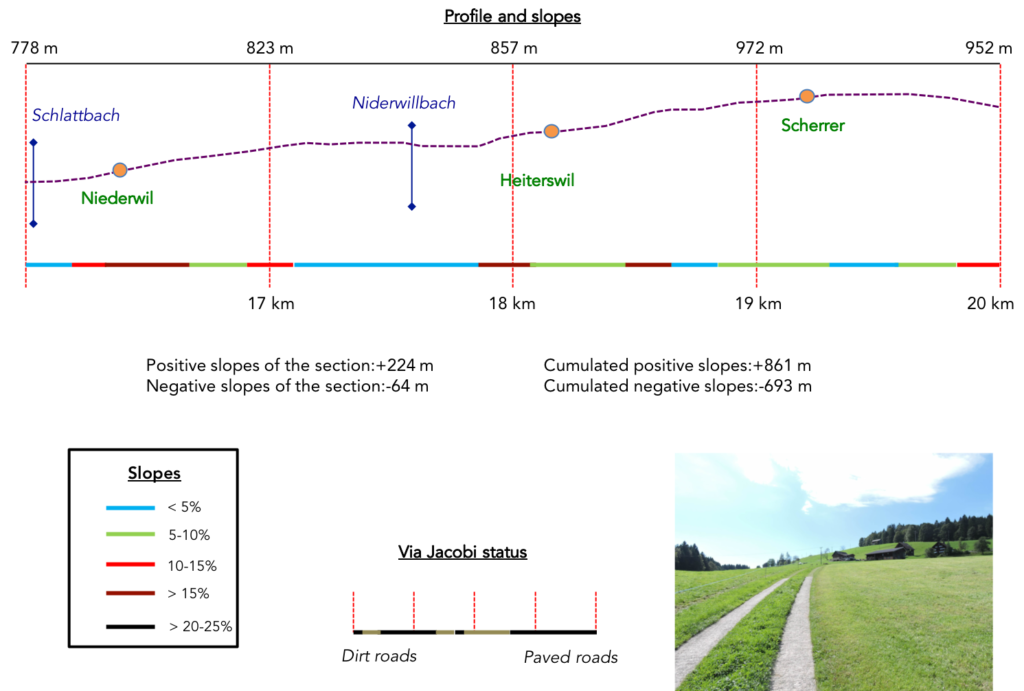 You can sit on the bench to catch your breath and admire the landscape in the valley.

It must be said here that this altitude restaurant, too, is very popular with the local population. At first glance, people are not bored here. 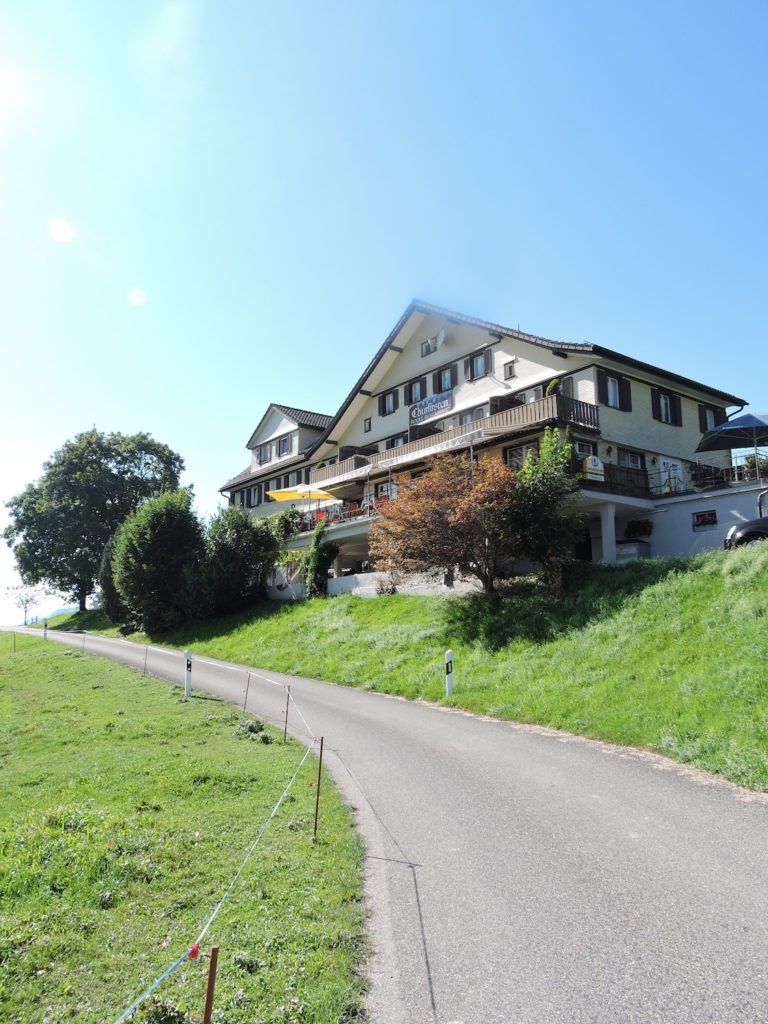 Section 6: A slide for Wattwil. 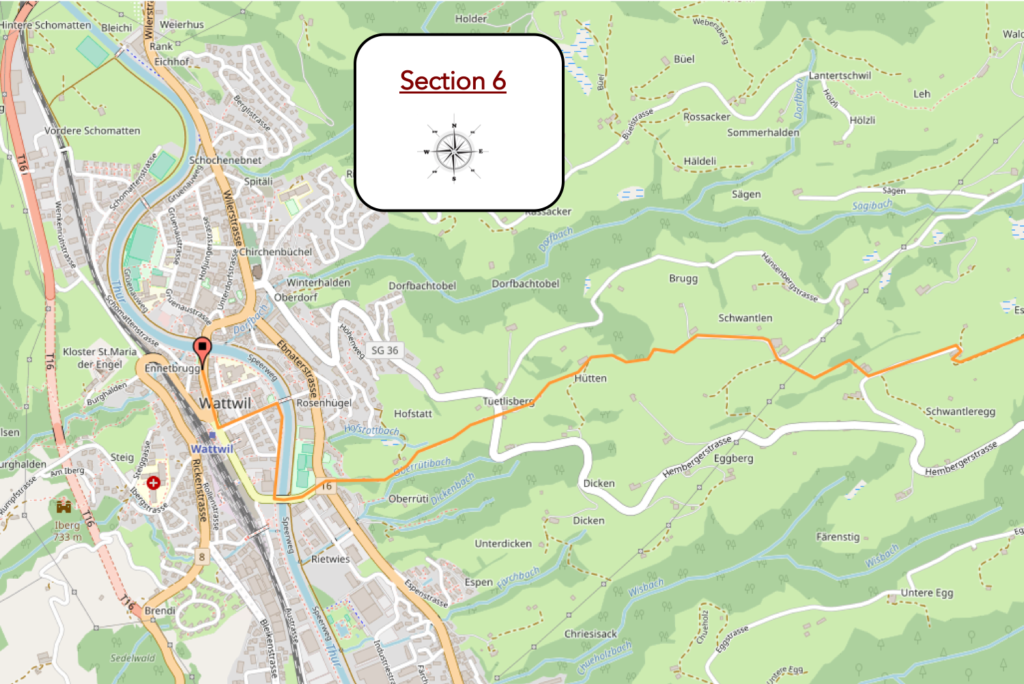 General overview of the difficulties of the route: very steep descent of more than 300 meters decline to Wattwil. 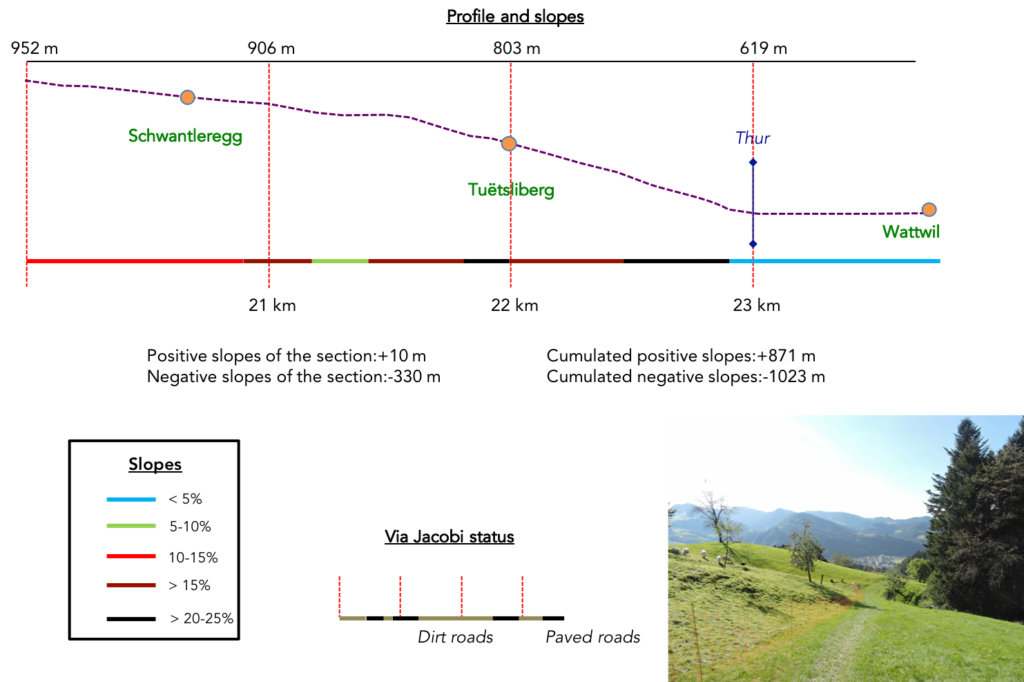 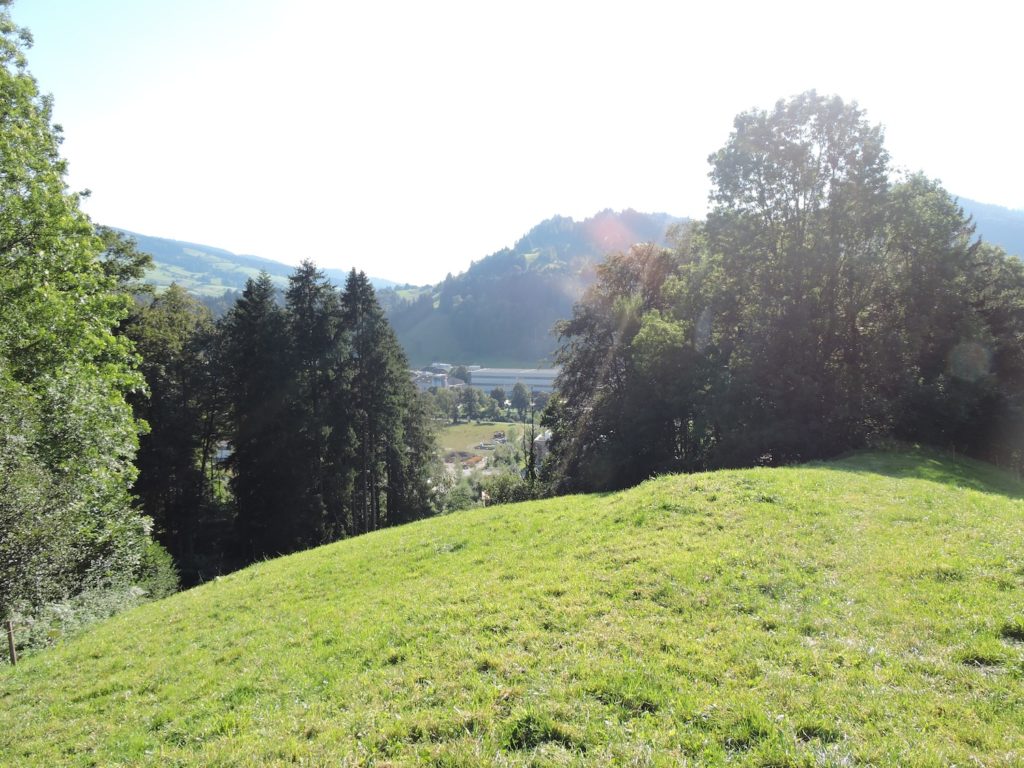 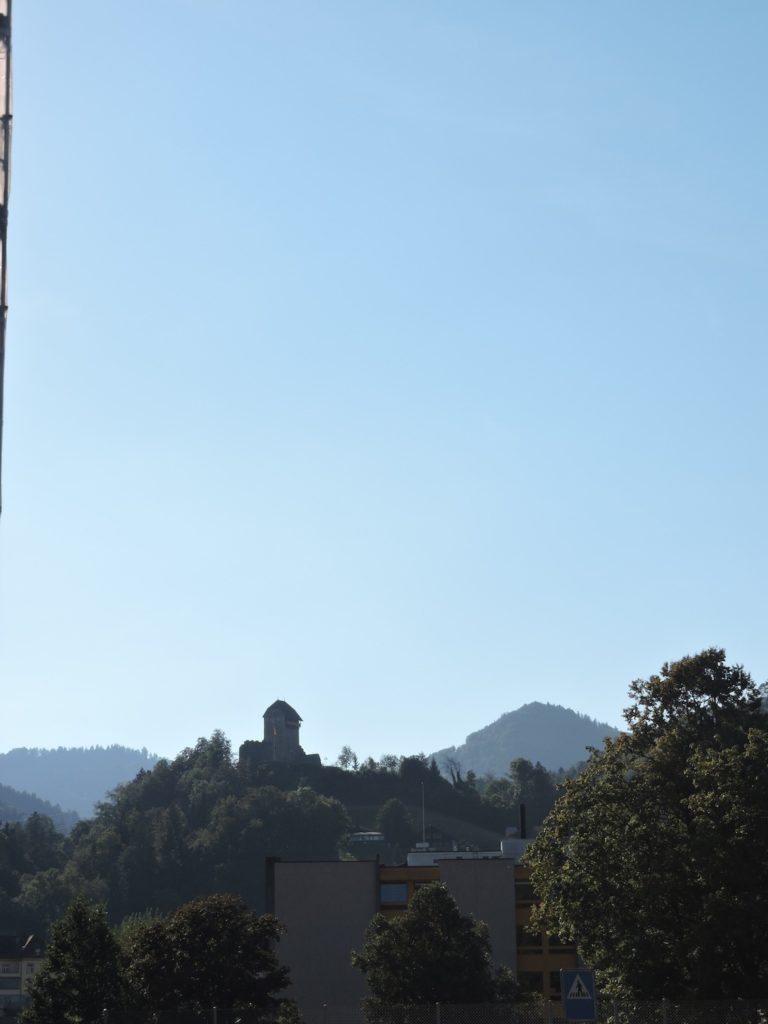