From Toggenburg to Zürich Lake 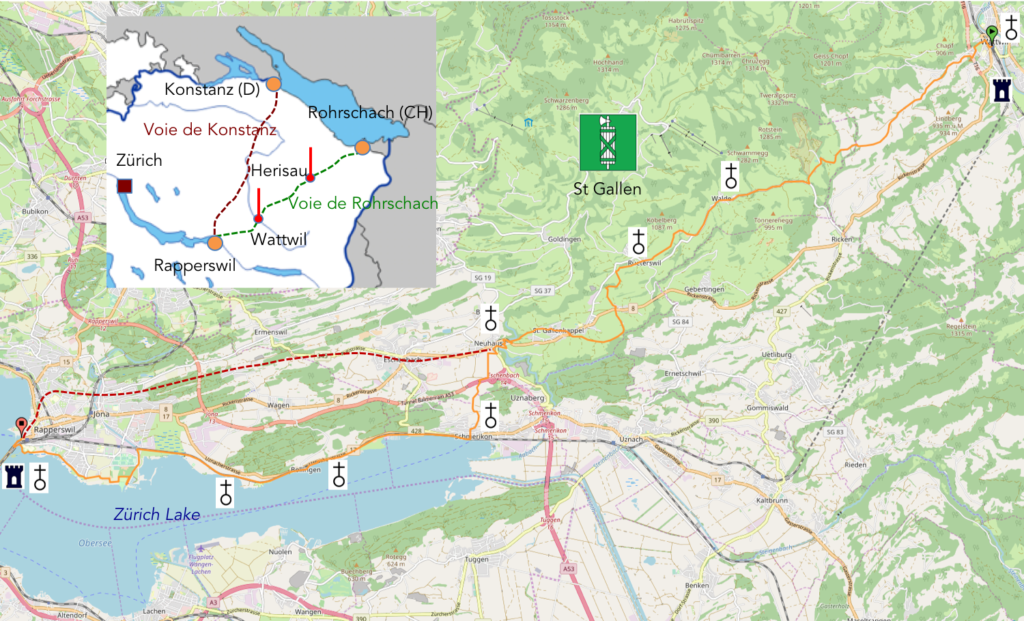 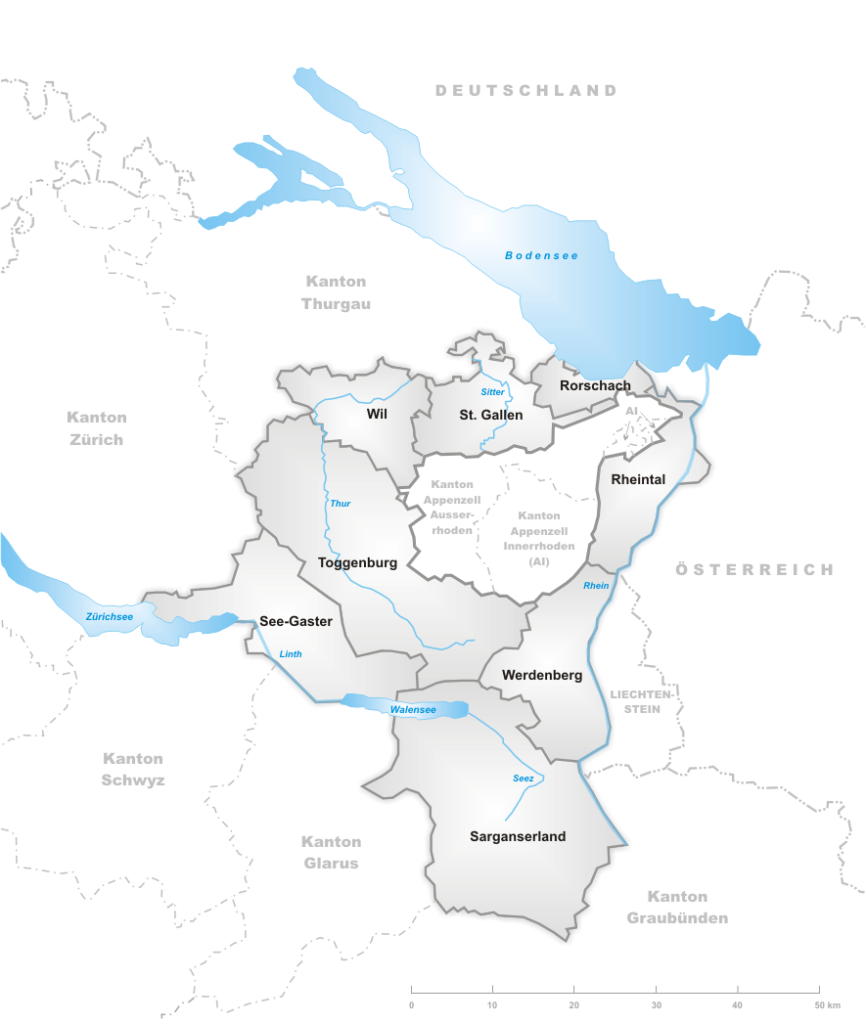 “The Swiss milks his cow and lives happily,” said Victor Hugo. It’s true, Switzerland is a country of meadows, agricultural lands being better suited to being used as meadows than to being cultivated. The land is rarely rich and more than 75% of the agricultural area is made up of meadows and mountain pastures. So, here, the route most often winds its way through the middle of the cows, along beautiful farmhouses, most often of wood, under their protruding roofs, their tiny lattice windows and sometimes even painted or sculpted corbels. The farms are very often isolated, more rarely grouped together in small hamlets. You will cross this scenery in the first part of the stage until you reach Neuhaus in the plain. You will find local cheeses in the region, not only the classic Emmental, Appenzeller and Tilsit, but also stronger cheeses such as toggenburger, blues or the famous cheeses of the Alps (Alpkäse).

When the route arrives in Neuhaus, you enter a more populated area, where the villages almost touch each other until Rapperswil. The density is not so high, but the Rapperswil basin is quite populated, given the proximity to Zürich. A good solution is to leave the traditional via Jacobi 4 and descend to Zürich Lake, then follow the shore to Rapperswil. This bank, surprisingly, is absolutely calm, almost devoid of villages. Only the train passes by from time to time. When you reach Zürich Lake in Schmerikon, you have another option. You can decide not to go to Rapperswil and walk directly to Einsiedeln. But Rapperswil is of course worth a visit for its prestigious lakeside setting and old town. In a parallel stage, we will go directly from Schmerikon to Einsideln, bypassing Rapperswil. (stage4a).

Difficulty of the course: Slope variations (+539 meters/-749 meters) are quite pronounced, but the stage is very long. The exit from Wattwil to Heid is tough and slopes of more than 15%, even 25-30% are not uncommon. From there, Via Jacobi slopes down to Zürich Lake, along very acceptable ups and downs. If you take the lake variant in Neuhaus, the route flattens along the lake shore, after a small bump at the exit from Neuhaus, after crossing the motorway.

In this stage, the paved routes are significantly inferior to pathways:

Section 1: In the Laad valley high above Wattwil.

General overview of the difficulties of the route: just consider the profile, it is often more than 15%; nearly 400 meters of positive sloping over 4 kilometers. 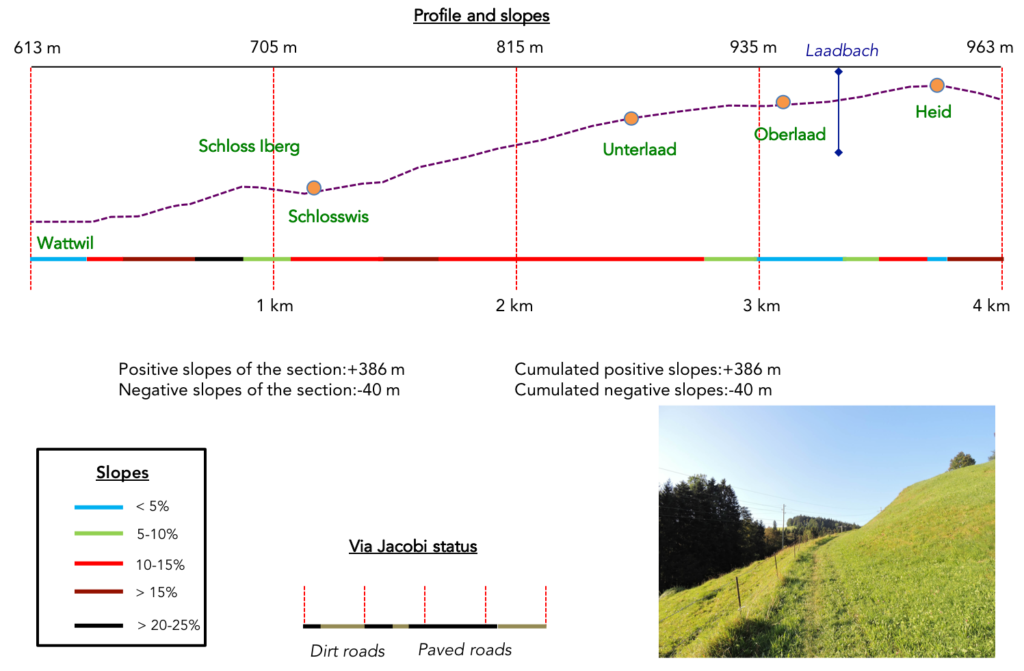 Along the way, you can see the large and former convent of the Capuchins, the Convent of Ste Marie des Anges, converted today into a “Farm of Hoper”. The first was founded in the 1980s in Brazil by a German Franciscan, Frei Hans Stapel. Thousands of young drug addicts have already been able to free themselves from the grip of narcotics and alcohol thanks to the rather unique experience of the “Fazendas da Esperança”. 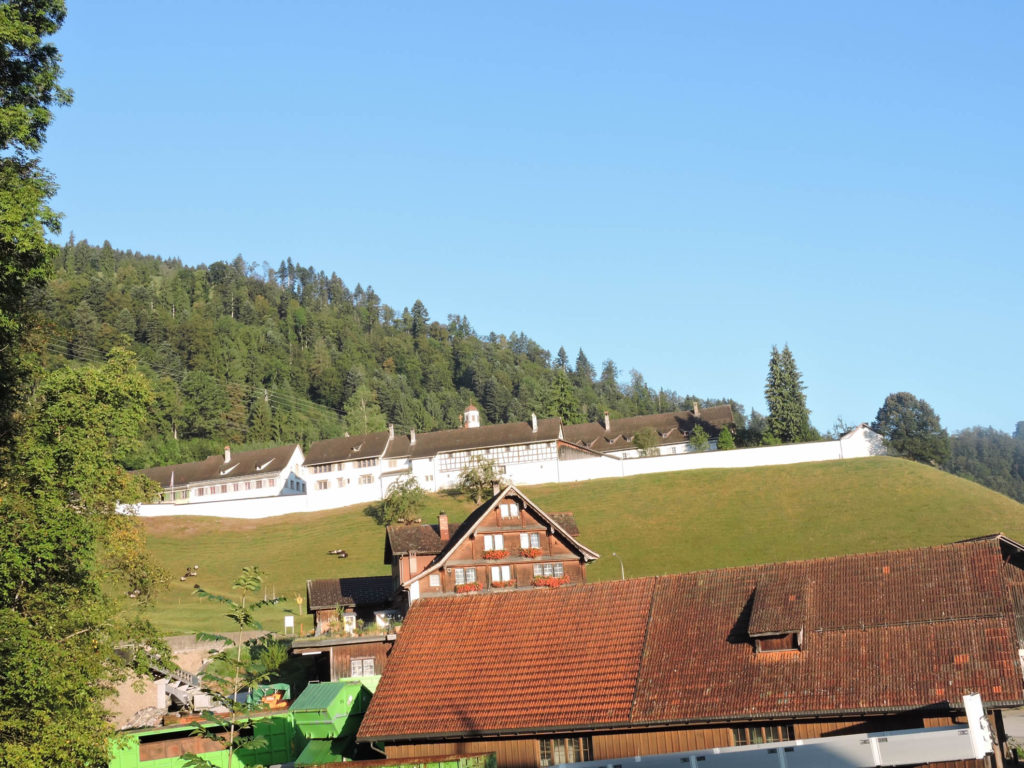 The castle is closed, barricaded in the thick foliage. There is nothing to get excited about. 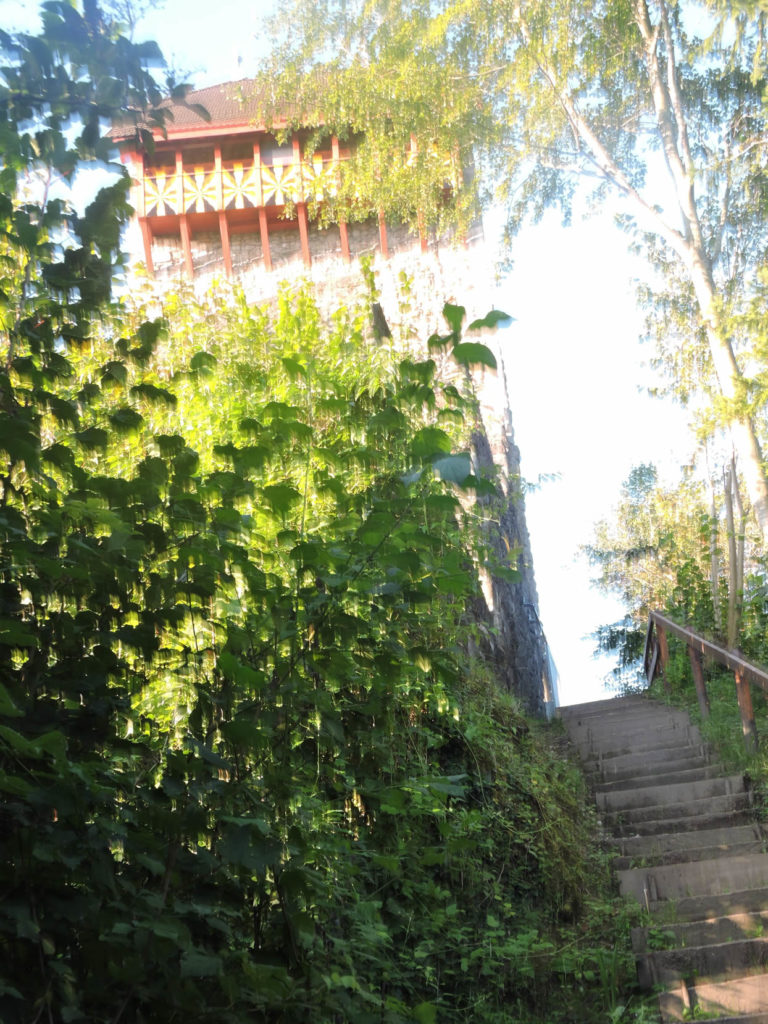 You only have to turn around to see that the road bends in a zigzag and the shortcut points straight ahead. And toughly. In fact, you may have imagined when descending steeply to Wattwill the day before that you would have to climb just as much on the other side of the valley. This is the law of the Ways to Santiago. 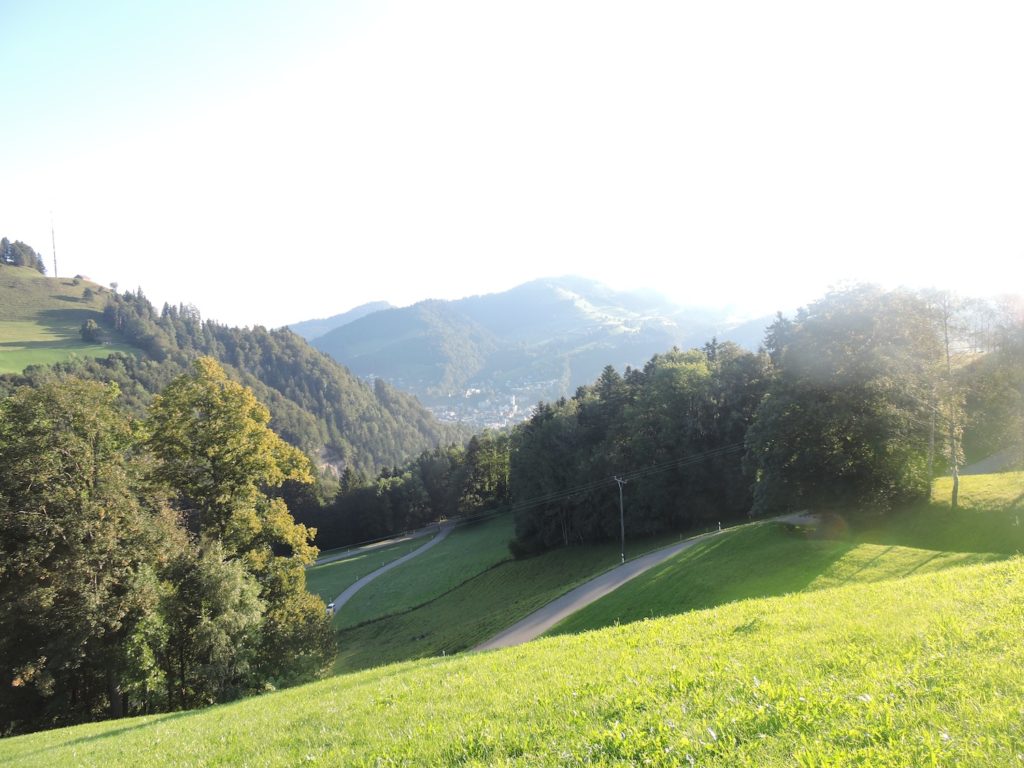 …to end on a flat place. Looking back, you’ll see Wattwil far below. You climbed 300 meters in just over 3 kilometers, sometimes with slopes greater than 20%. It’s steep, right? 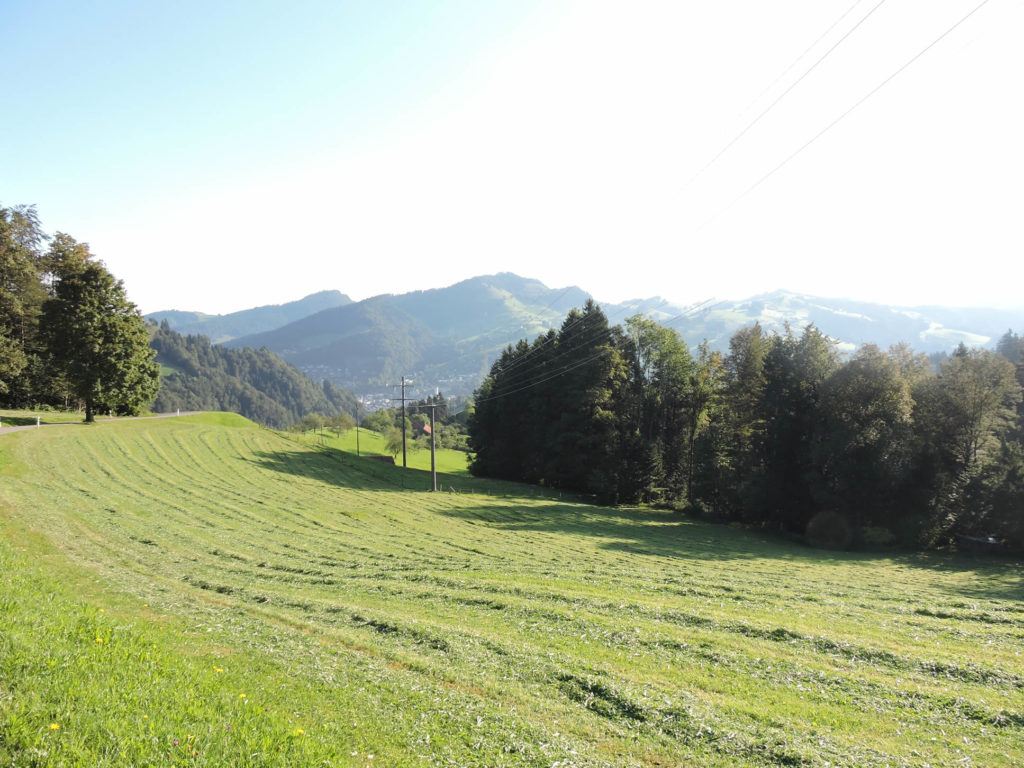 Here, you will leave this incredible Toggenburg that you crossed for 2 days for the lake region to Rapperswil, at the end of Zürich Lake.

General overview of the difficulties of the route: : easier course, mostly downhill, with few excessive slopes. 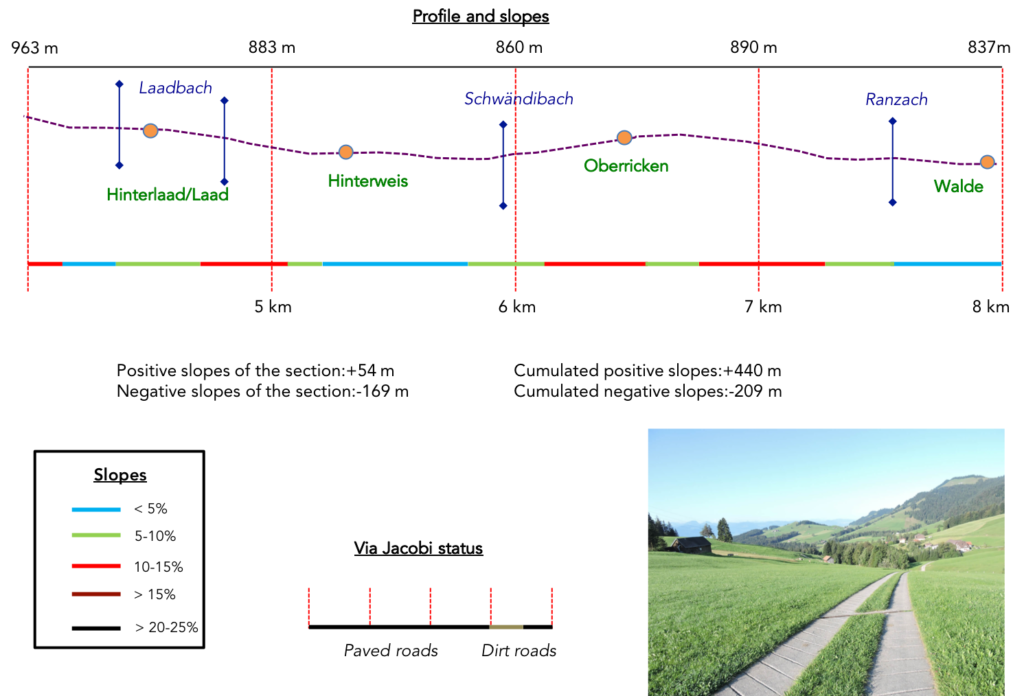 General overview of the difficulties of the route: easier route, mostly downhill, with marked slopes near Rüeterswil. 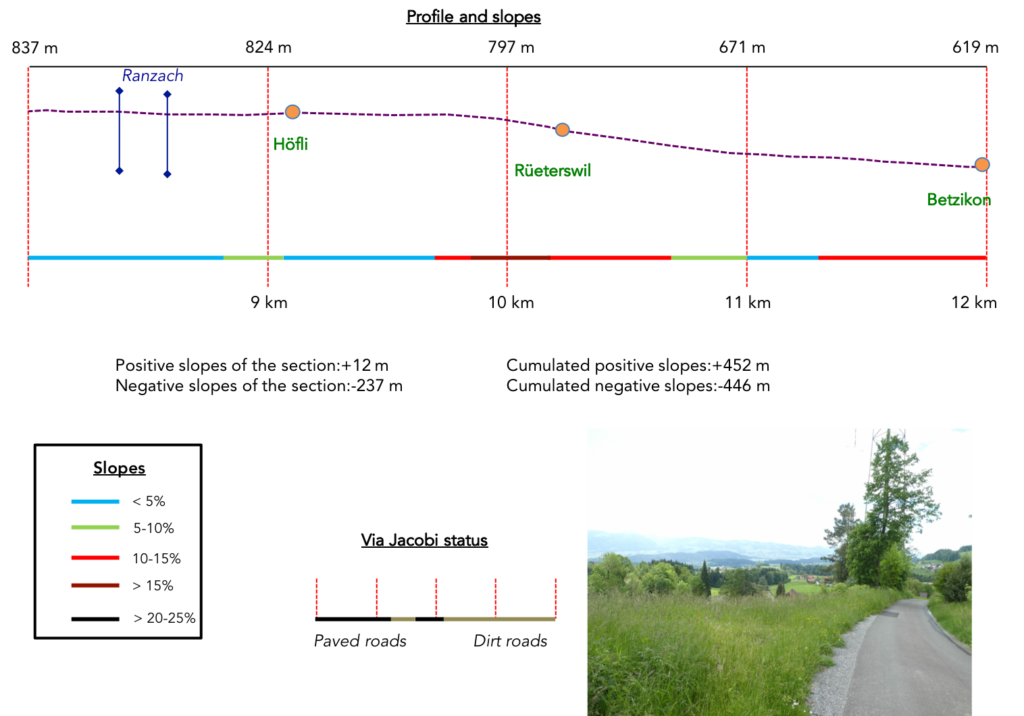 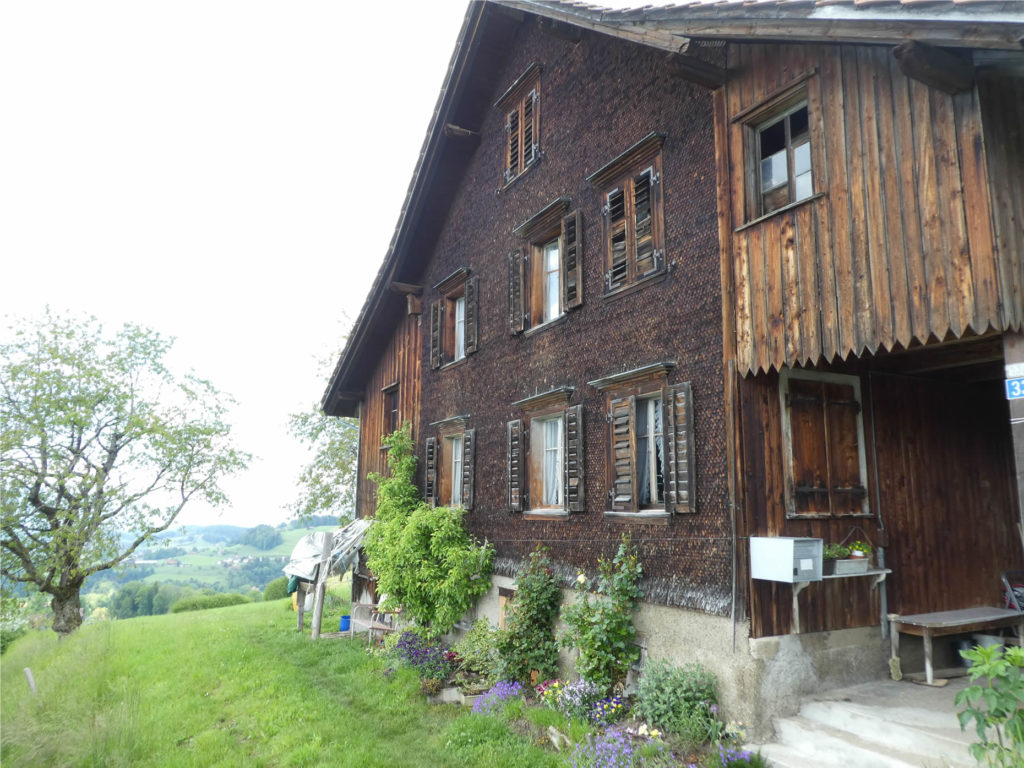 The chapel dates from the end of the XVIIth century and is dedicated to St Ursula. It is in the Baroque style, like most of the religious buildings in St Gallen, and well laid out despite its simplicity. 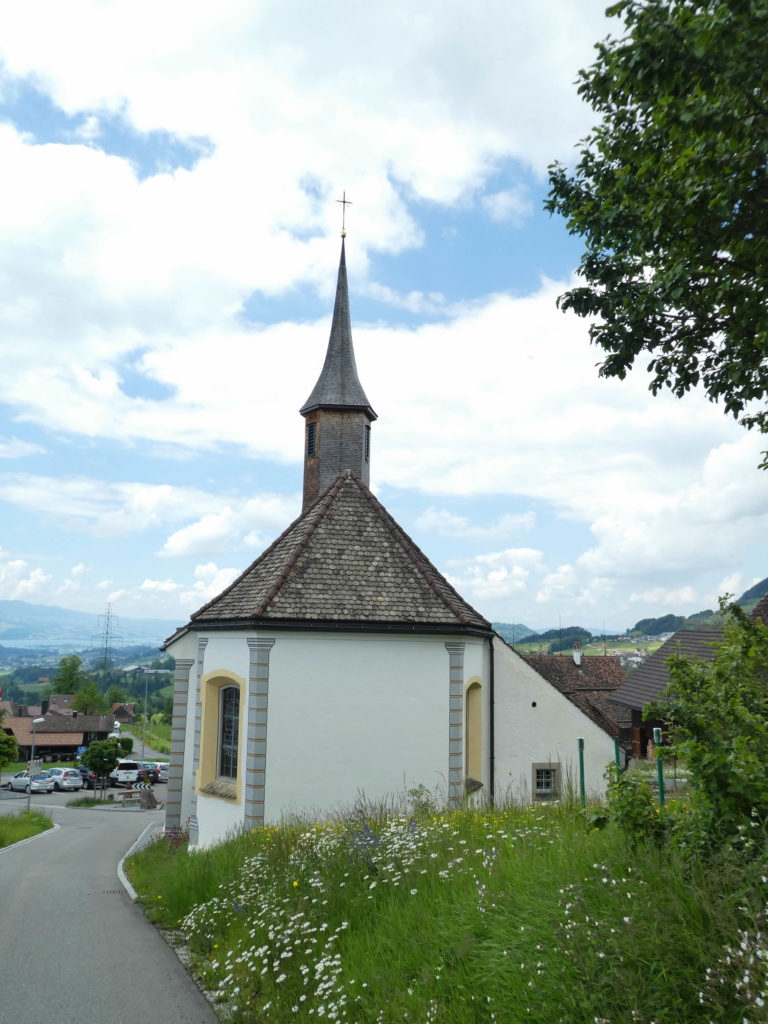 Section 4: Through the Aabach River, the Neuhaus canyon.

General overview of the difficulties of the route: : ups and downs without great difficulty; the steepest slopes are when approaching Aabach River, at the entrance to Neuhaus. 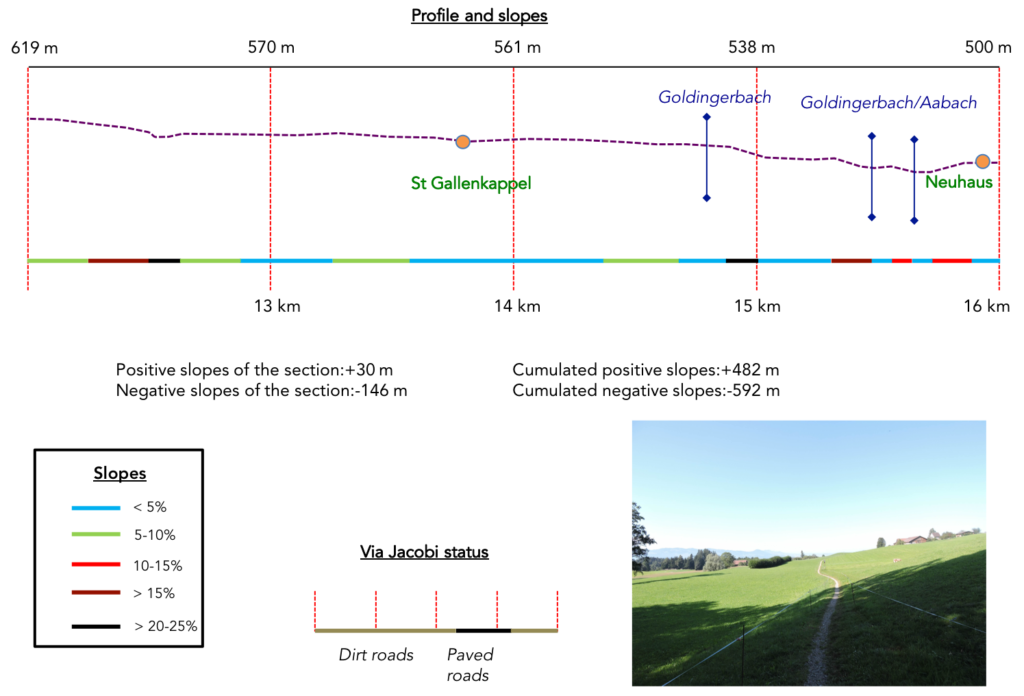 The canton of St Gallen is rich in chapels. The XVIth century St Michel chapel has also undergone the same renovations as the church in recent centuries.

You then arrive in front of a direction sign which deserves an explanation, depending on the track you choose. Usually, Via Jacobi is indicated with the number 4 circled in blue to signify Jakobsweg towards Compostela. The uncircled number 4 indicates the track in the other direction. So here, everything is confused. In many maps, the main Via Jacobi passes through Rapperswil before reaching Einsiedeln. Not on the panel! Because here, it’s rather suggested taking the route via Schmerikon, then Einsiedeln, without going to Rapperswil. The other sign indicates the direction of Eschenbach, Rapperswil.

But here you are! The route via Eschenbach, Jona, then Rapperswil is not very interesting. It crosses many inhabited districts. The other route quickly joins Zürich Lake, and beyond Schmerikon, instead of continuing to Einsiedeln, you can reach Rapperswil, flattening along the lake. The two routes are fairly equivalent in terms of kilometers.

We therefore advise you to walk to Schmerikon, which we will do today. In Schmerikon, you may decide for Rapperswil or Einsiedeln. 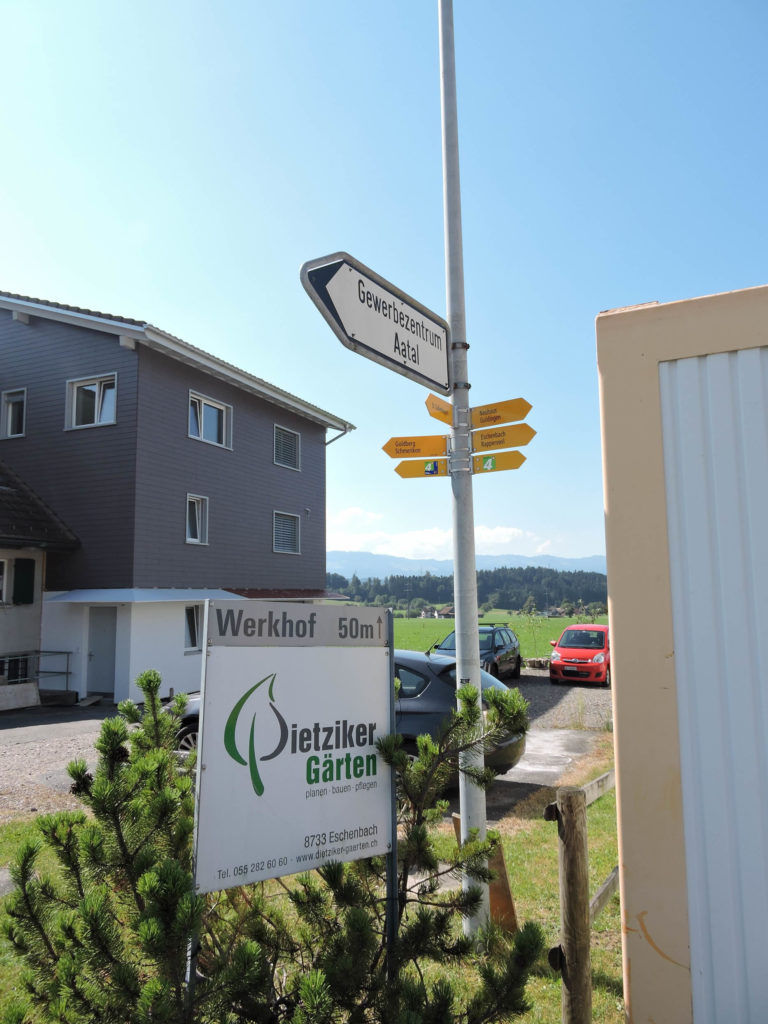 Section 5: Before a nice walk along Zürich Lake. 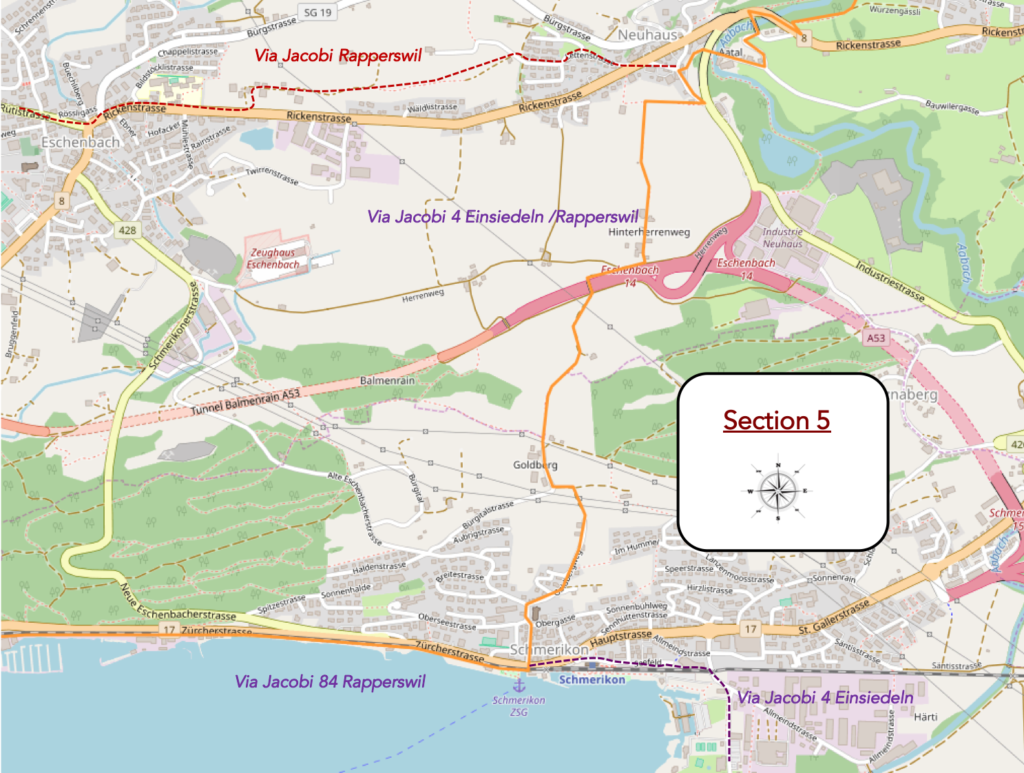 General overview of the difficulties of the route: ups and downs without great difficulty; the descent to Schmerikon is quite tough, then after, the holidays begin. 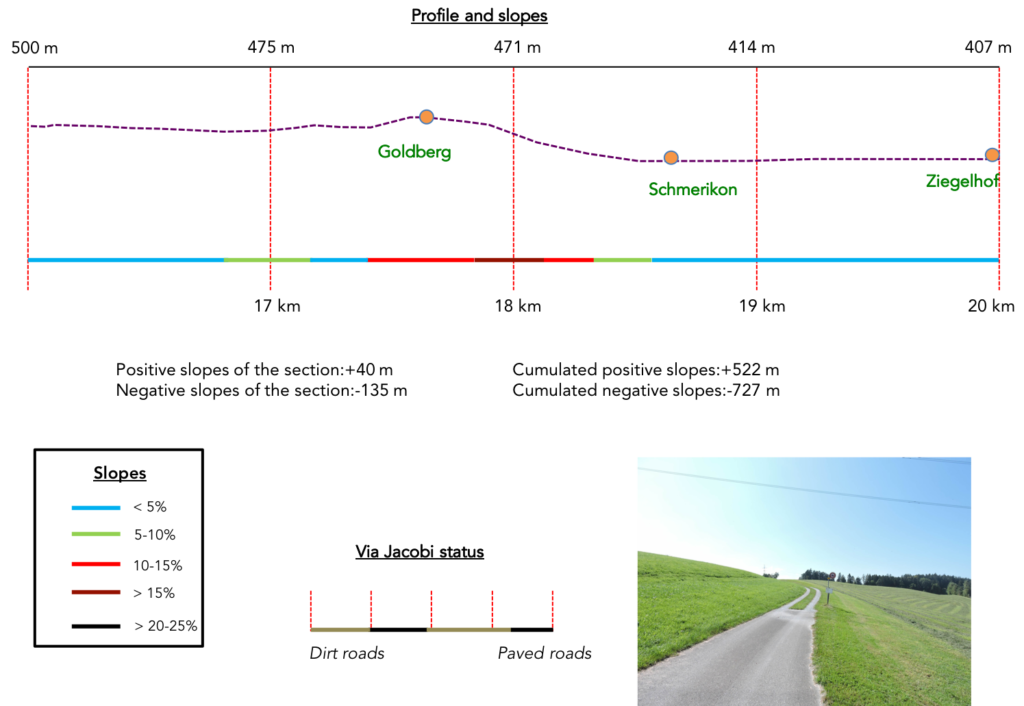 Beyond Schmerikon, you can reach Einsiedeln via Etzel Pass. Up to the pass it is 23 kilometers with a positive elevation of 661 meters and a negative elevation of 120 meters. The track leaves the canton of St Gallen at the exit of Schmerikon for the canton of Schwyz and runs through Siebenen and Lachen. Beyond Etzel Pass, the route joins Via Jacobi 4 which comes from Rapperswil and descends to Einsiedeln. This stage is described later in stage 4a. 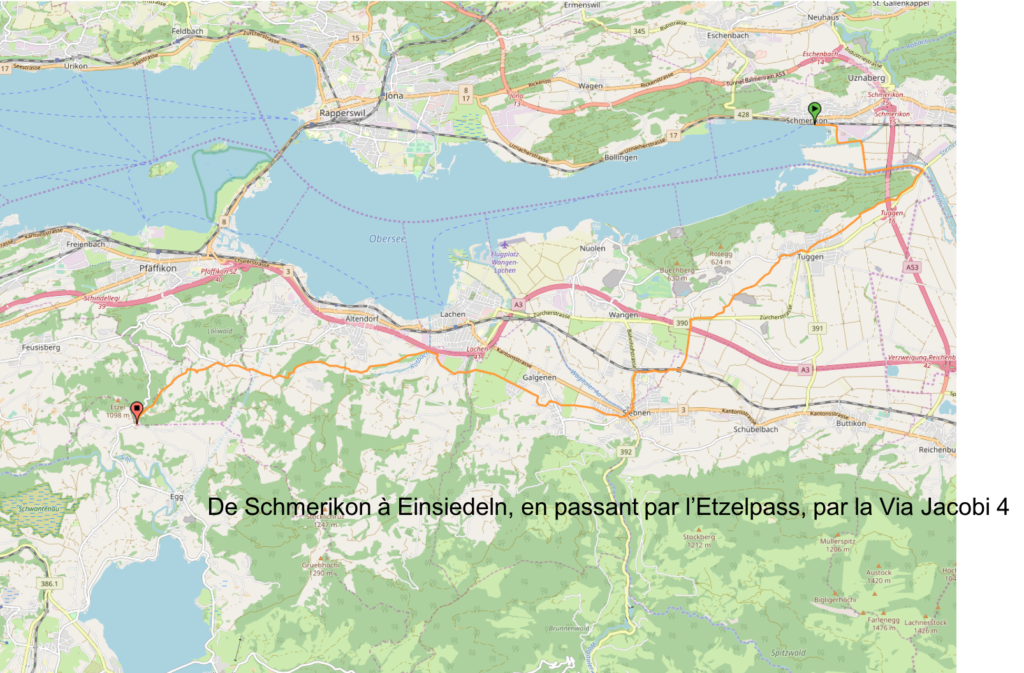 But Rapperswil is well worth a visit, as it is a remarkable city. Here you have to leave the variant of Via Jacobi 4 which heads to Einsiedeln and follow the hiking trail 84 towards Rapperswil. 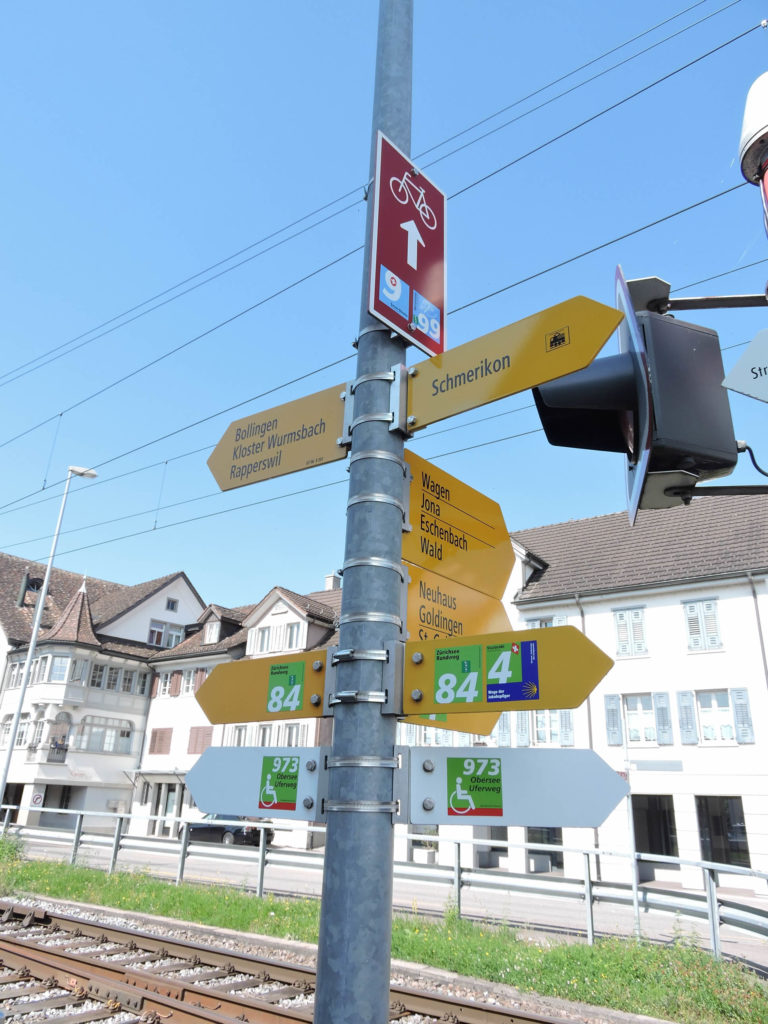 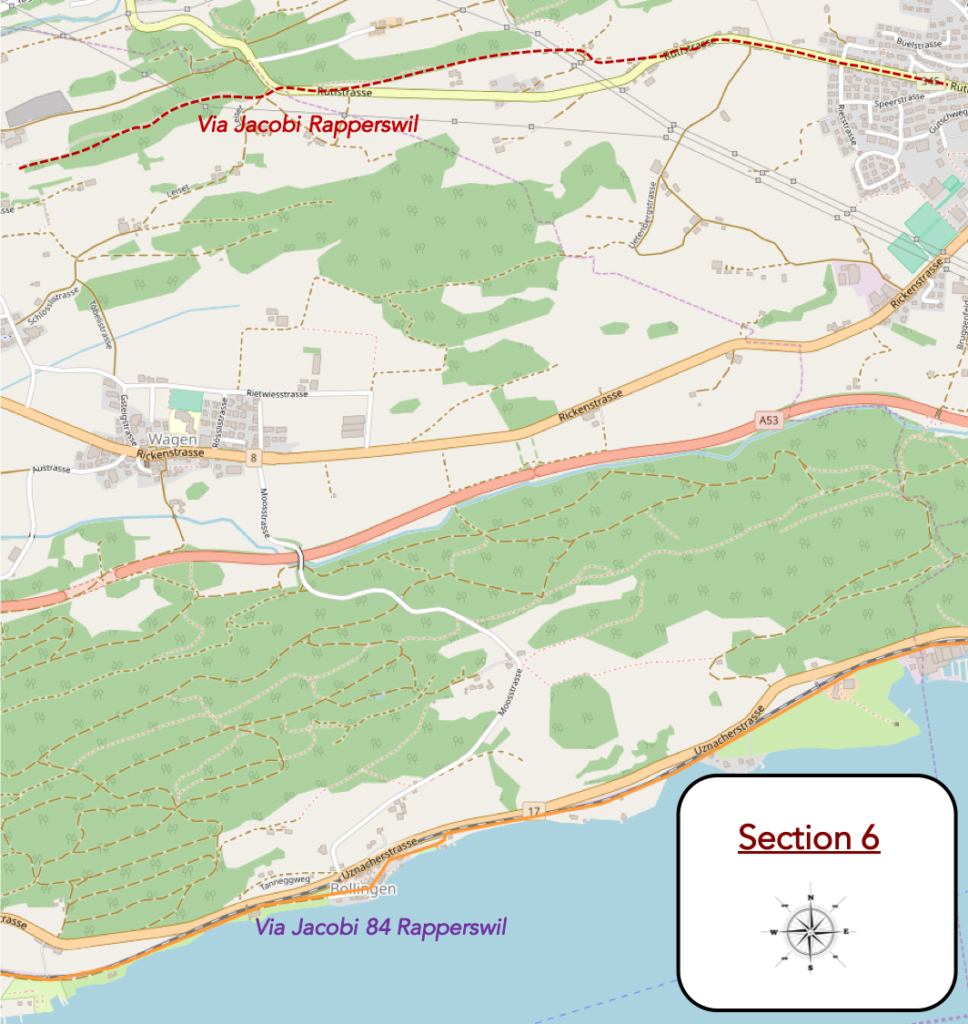 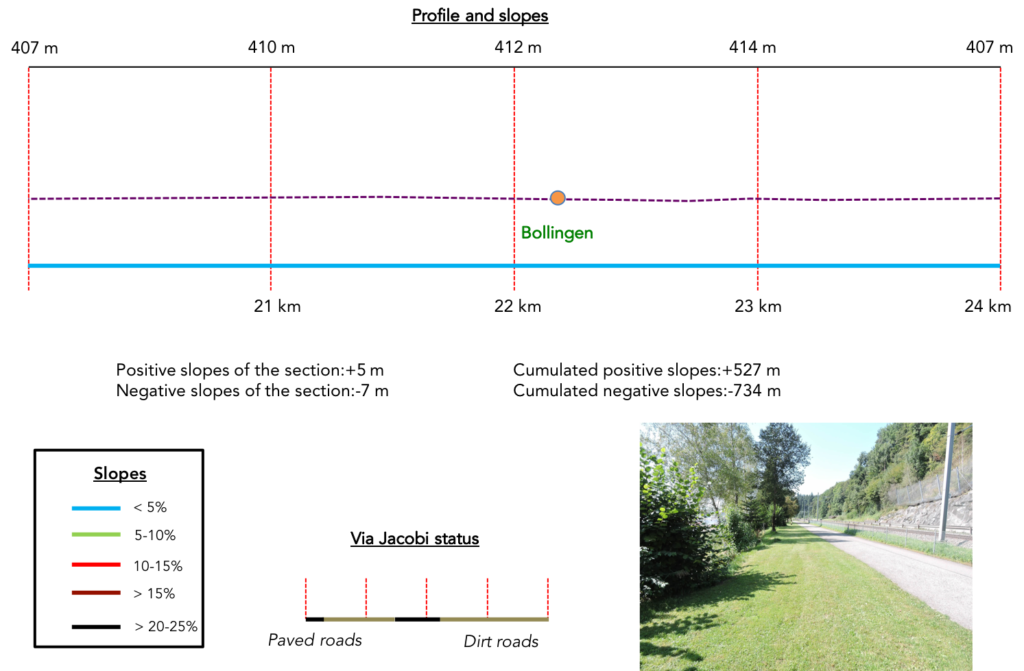 Rapperswil is announced more than two hours from here. 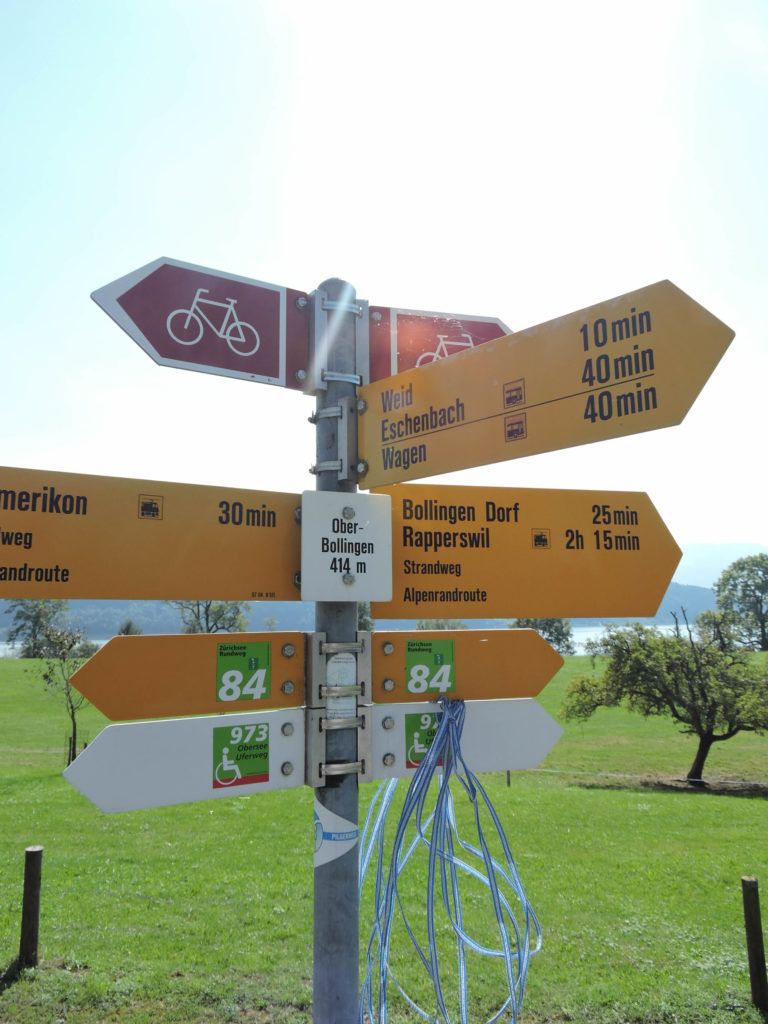 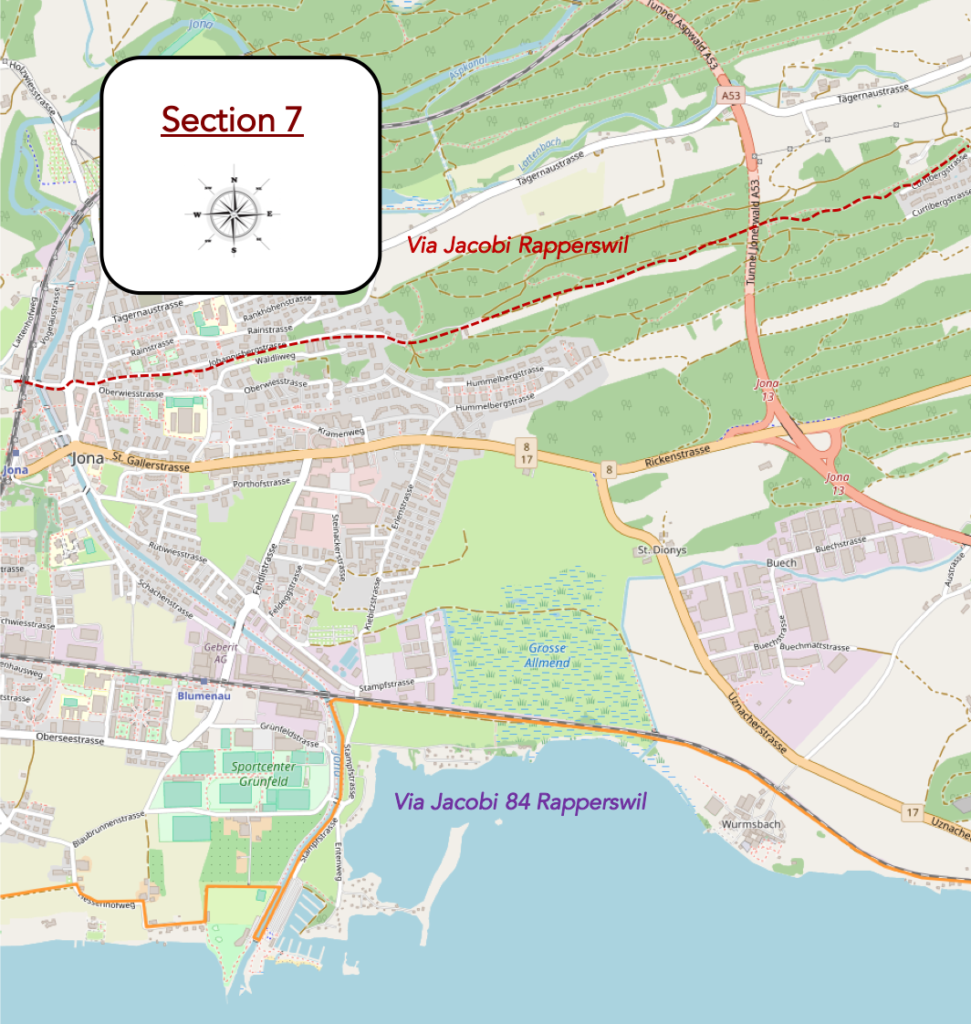 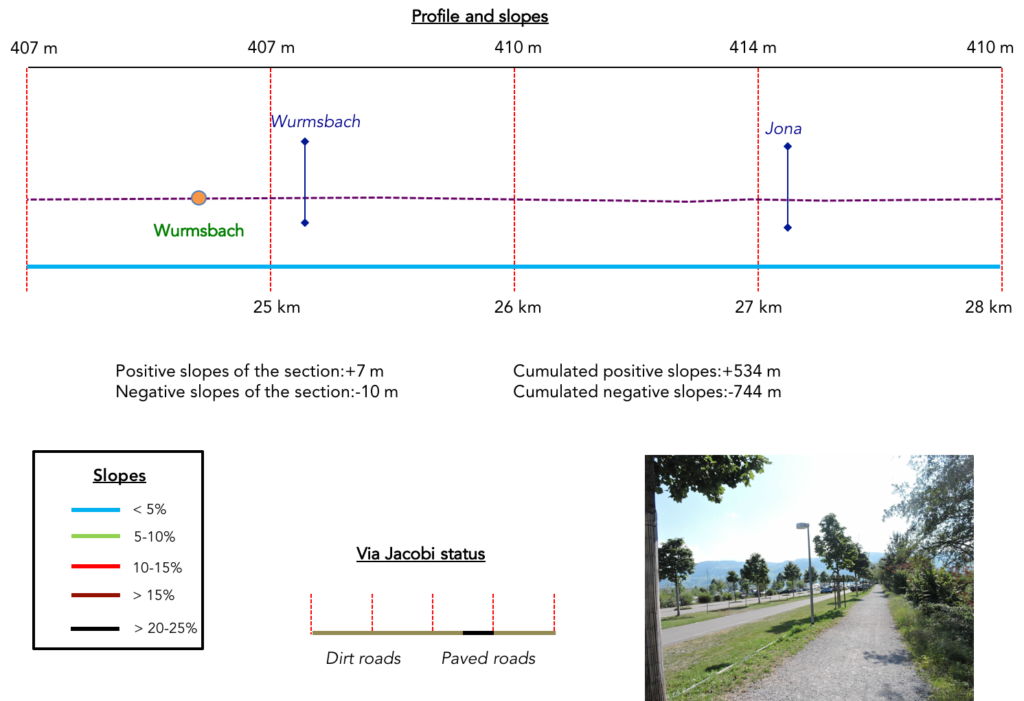 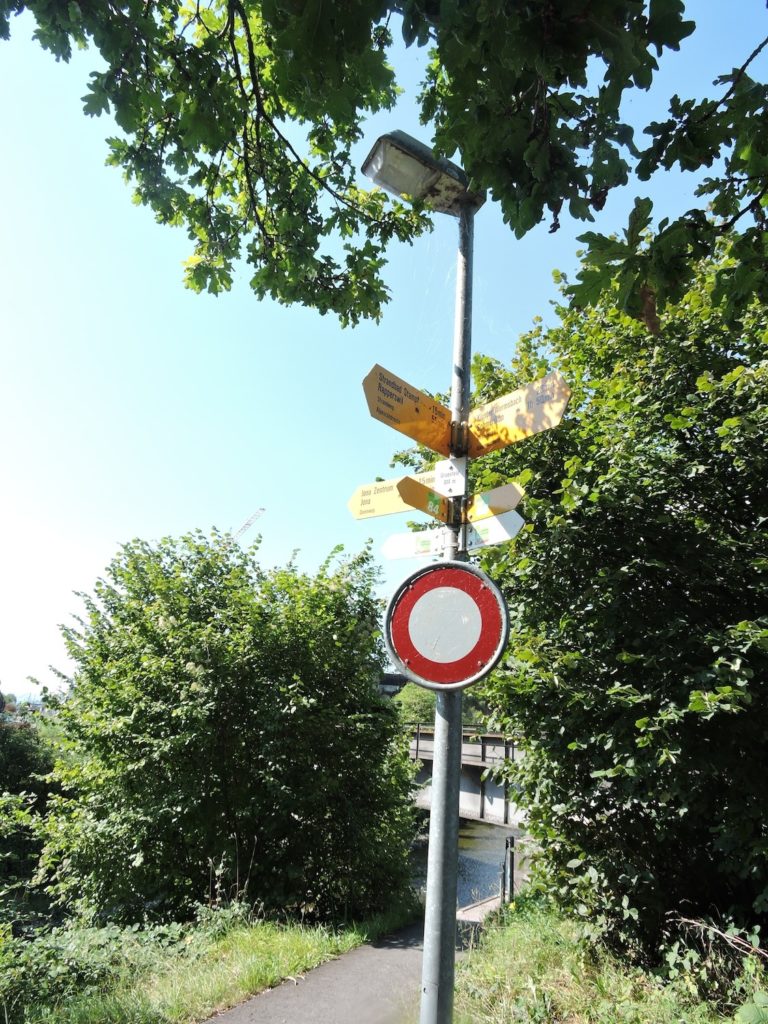 Section 8: In Rapperswil, the jewel of Zürich Lake. 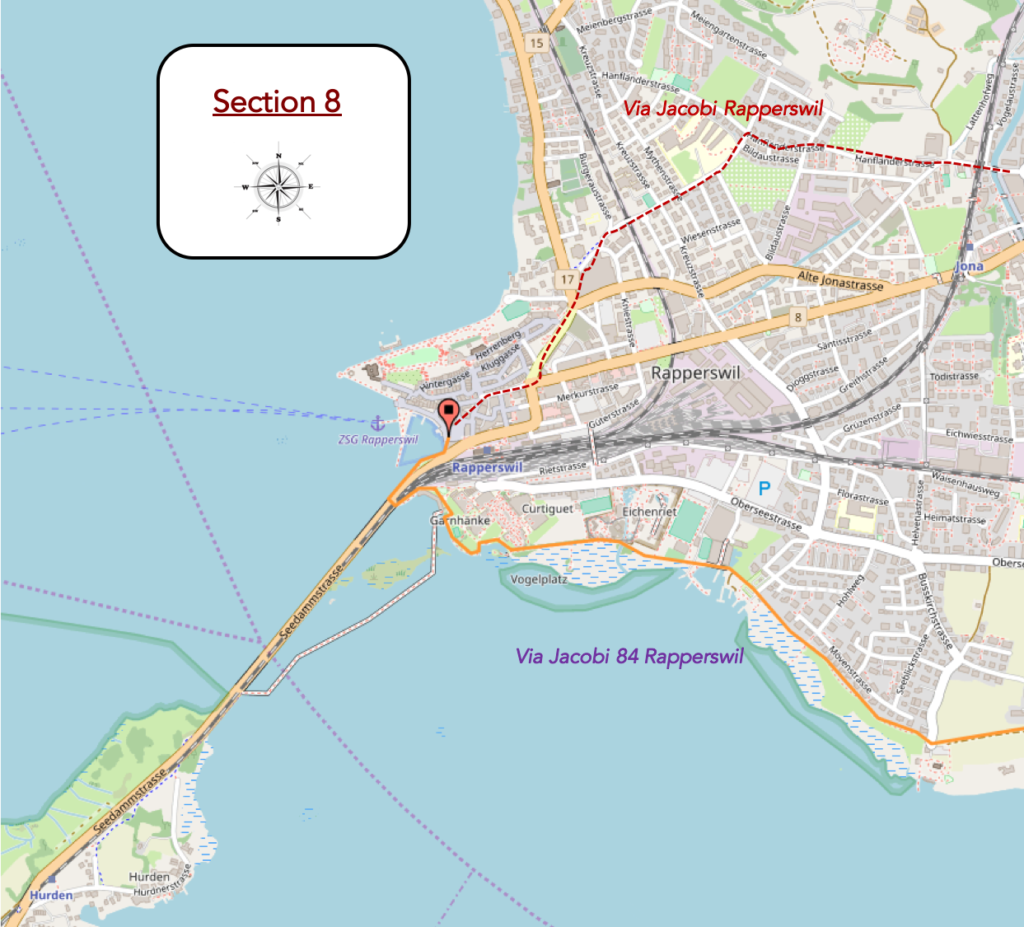 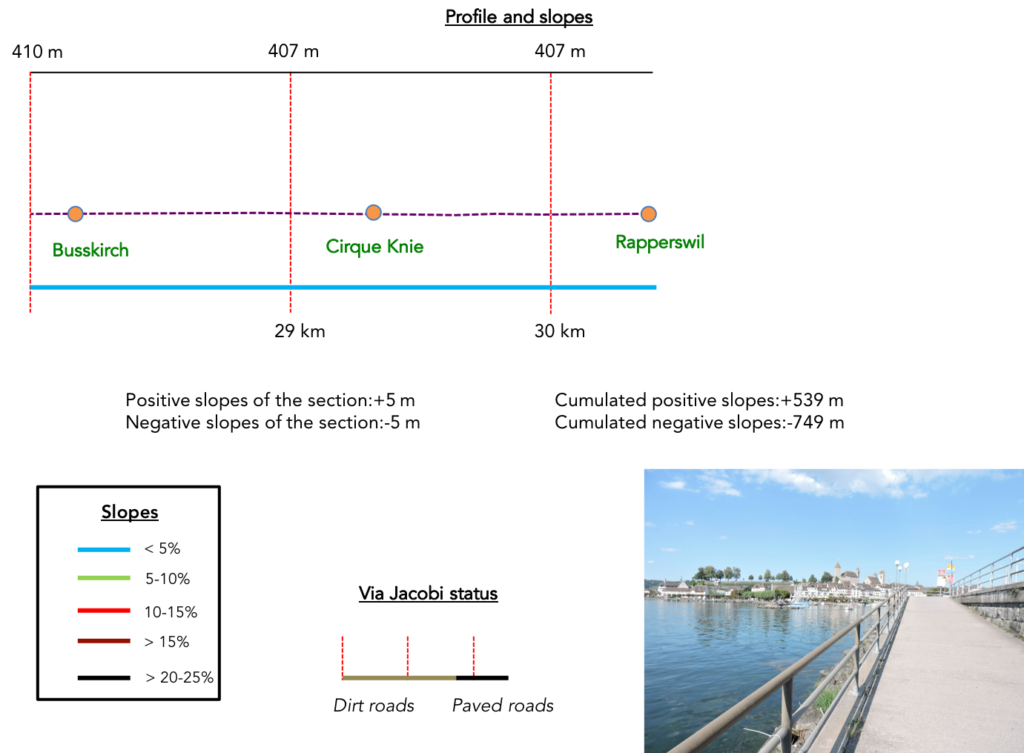