At the foot of the mythical Mythen range 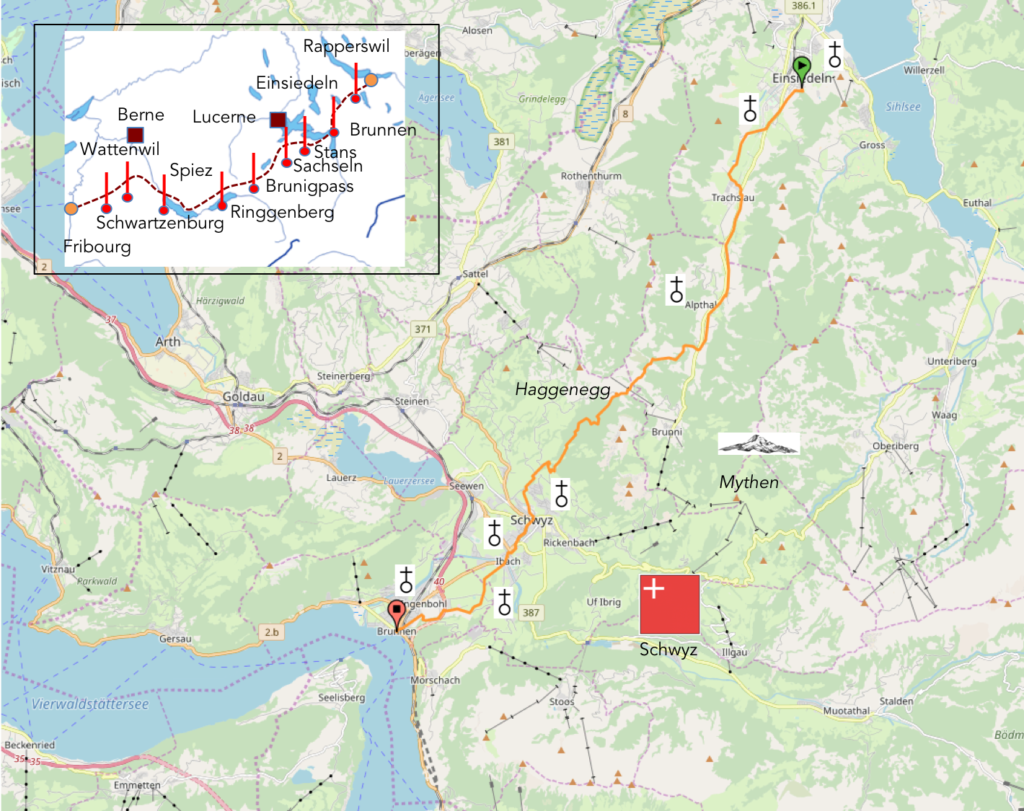 Today, the trip takes you over hill and dale to 4 Cantons Lake (Vierwaldstättersee). In the heart of so-called primitive Switzerland, the lake spreads its branches, which look like fjords, between the cantons of Uri, Schwyz, Unterwalden and Lucerne. Switzerland, between history and legends, was born here. William Tell, Arnold Winkelried, and all the other Waldstätten of the Rütli oath of 1291 must have taken these axes one day, whether they existed or not. History, today, sweeps away these stories a little, which hurts the hearts of many Swiss people. Nevertheless, the fact remains that central Switzerland is the historic and tourist heart of the Swiss Confederation, with the lake as its epicenter. The history of Switzerland is written here along the water or on the sometimes very steep slopes of the mountains overlooking the lake. Because before finding the steamboats plying the lake, you have to cross the Mythen ranges beyond Einsiedeln. When you walk by here, you will discover, for those who have never been there, a magnificent region which is full of charm and heritage in every corner of the groves or in the small boroughs.

Difficulty of the course: The journey takes place on significant slope variations, especially in tough descent (+595 meters / -1031 meters). The course is entirely in the canton of Schwyz. If the first part of the route is only a walk, almost flat, in the valley where the Alp flows, a very demanding climb in the forest leads to the pastures of Hagenegg, the highest point of the Camino de Santiago in Switzerland, at the foot of the two Mythen mountains. From there, a long and steep descent leads first to Schwyz, the capital of the canton. Then, the route is without problem to reach Brunnen, at the foot of the lake. 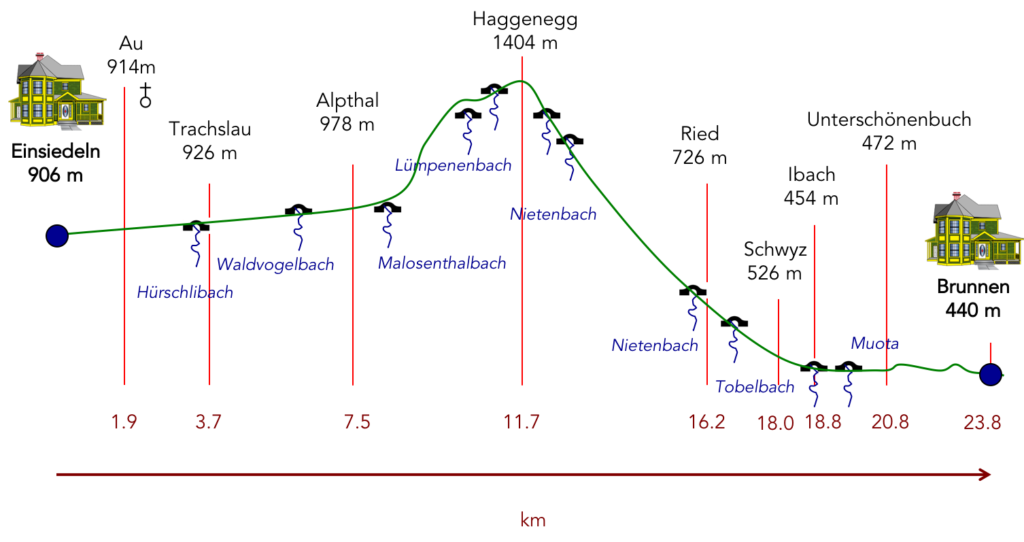 In this stage, a large part of the route takes place on pathways, in the forest:

Section 1: Along the Alp River, which flows gently into the valley. 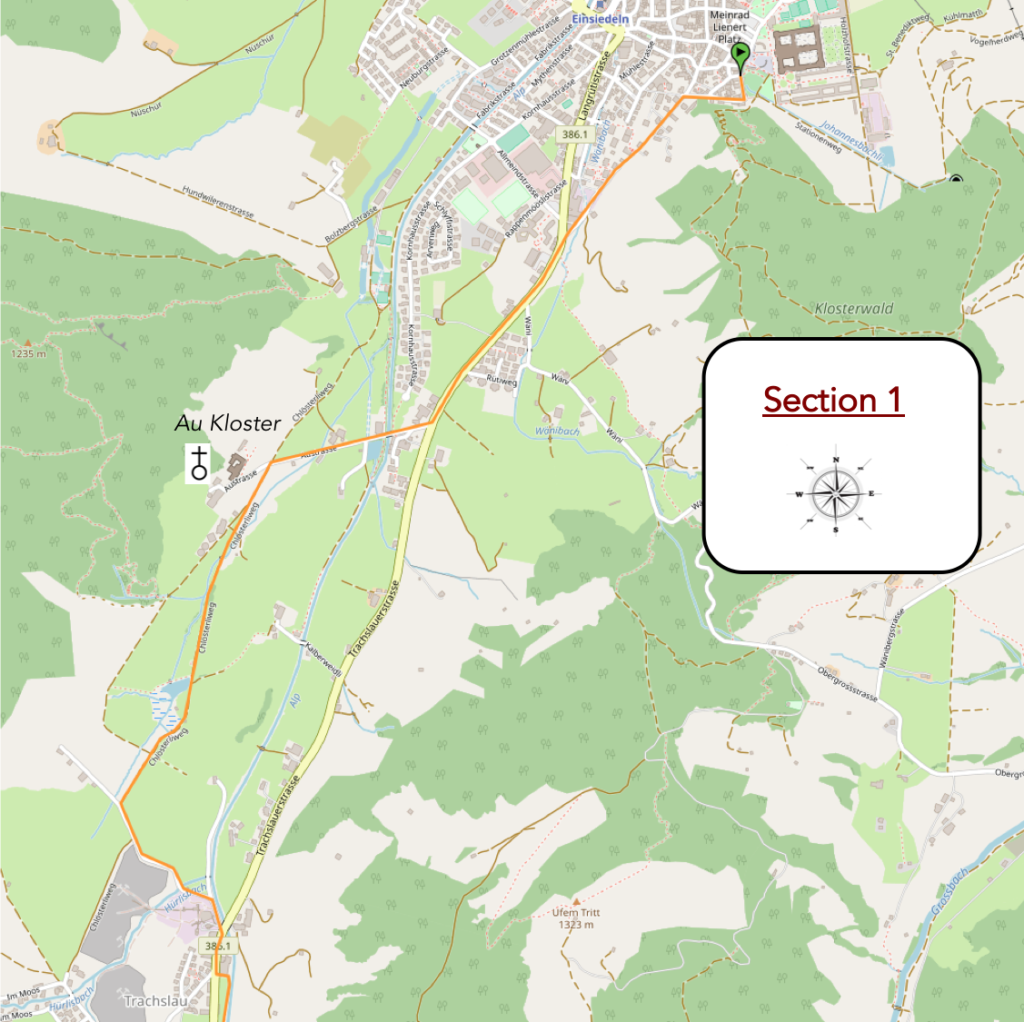 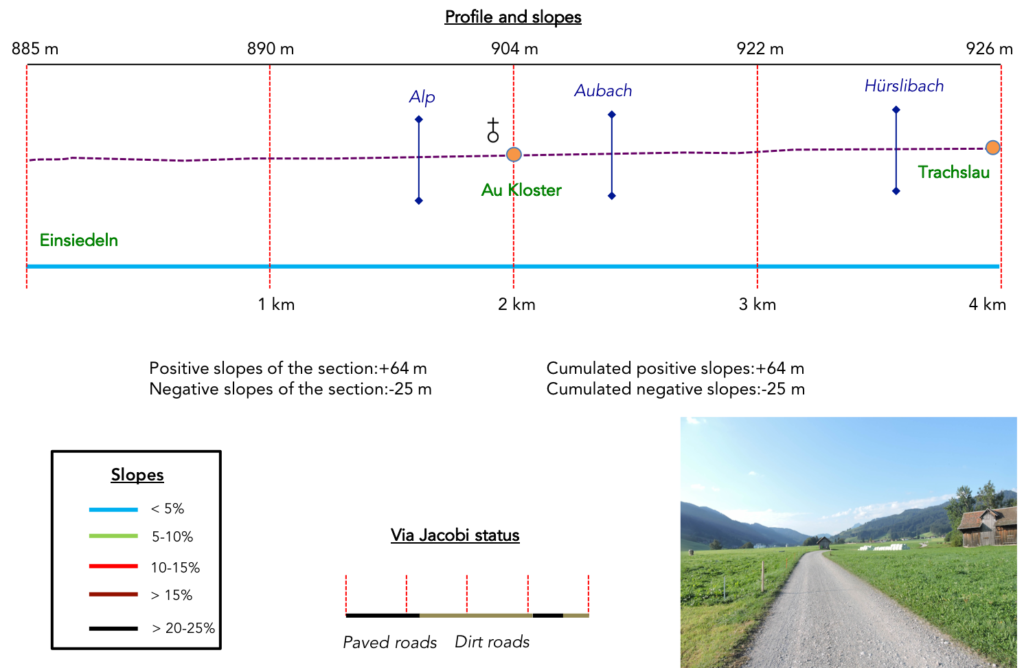 Shortly after, a variant is proposed to climb up to the mountain of Haggenegg via the village of Trachslau. But the direct Via Jacobi 4 continues straight. 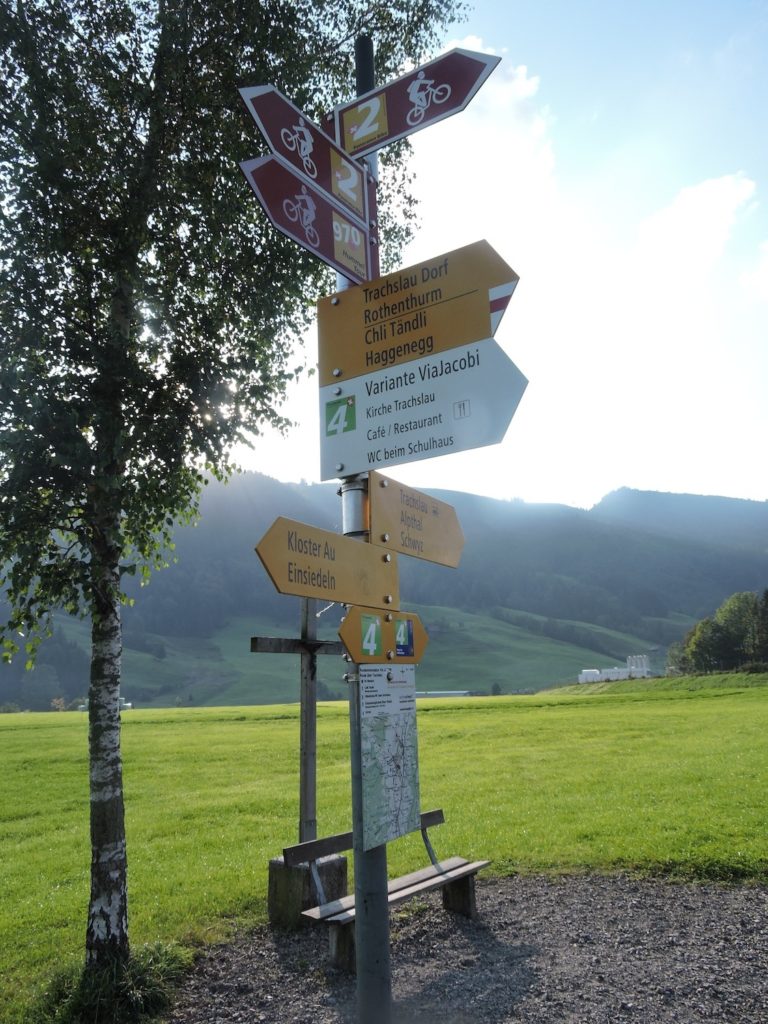 Section 2: The track will soon leave the plain of the Alp. 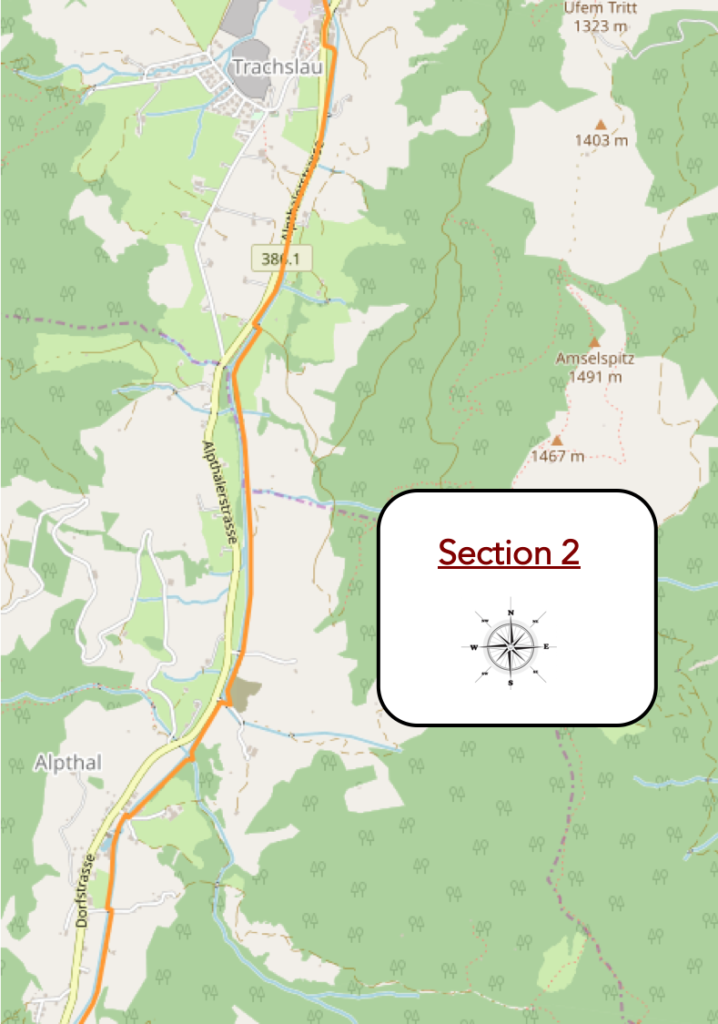 AGeneral overview of the difficulties of the route: course without any difficulty. 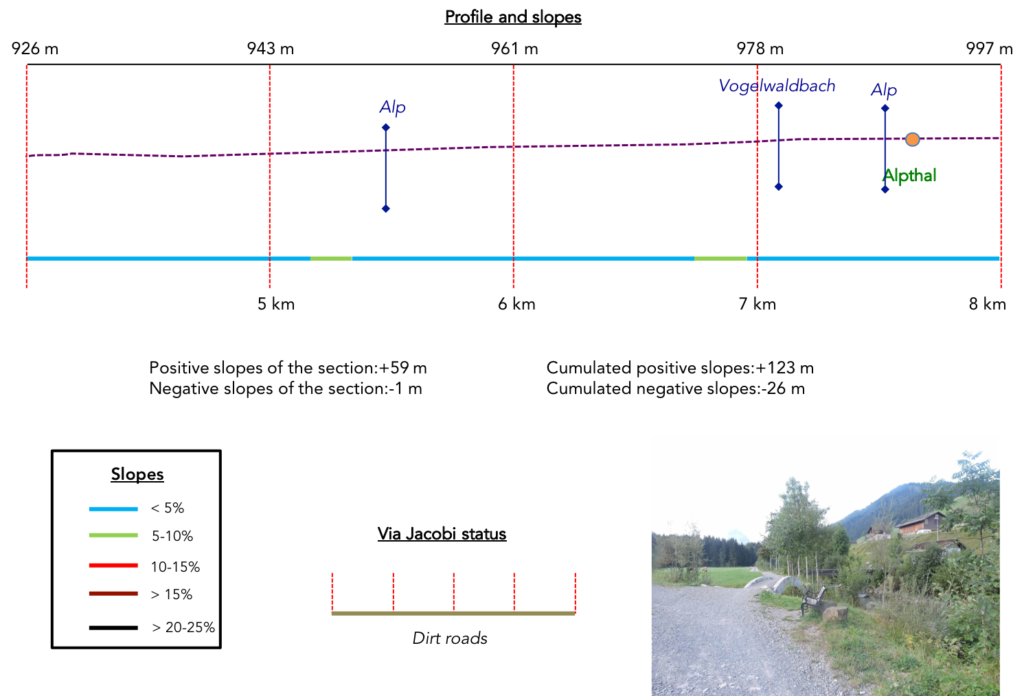 The gaze hesitates between the softness of the meadows and the rigor of the river bed. But up there in front of you, there are the Mythens mountains where you will have to climb. 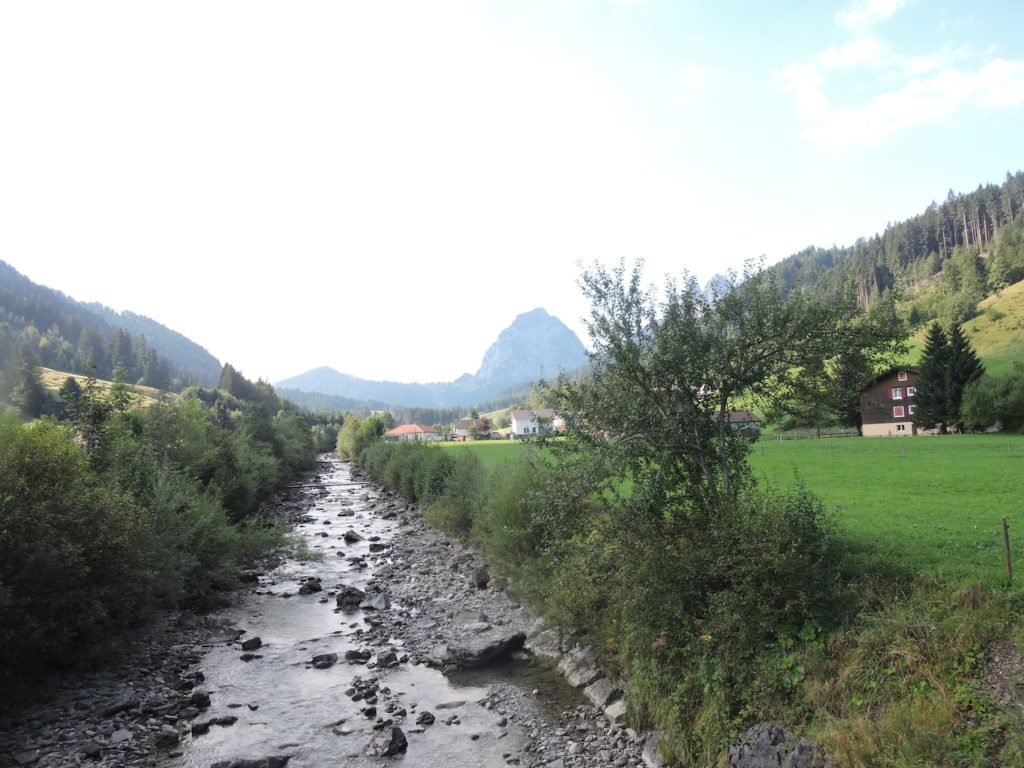 Section 3: On the way to the mountain pastures. 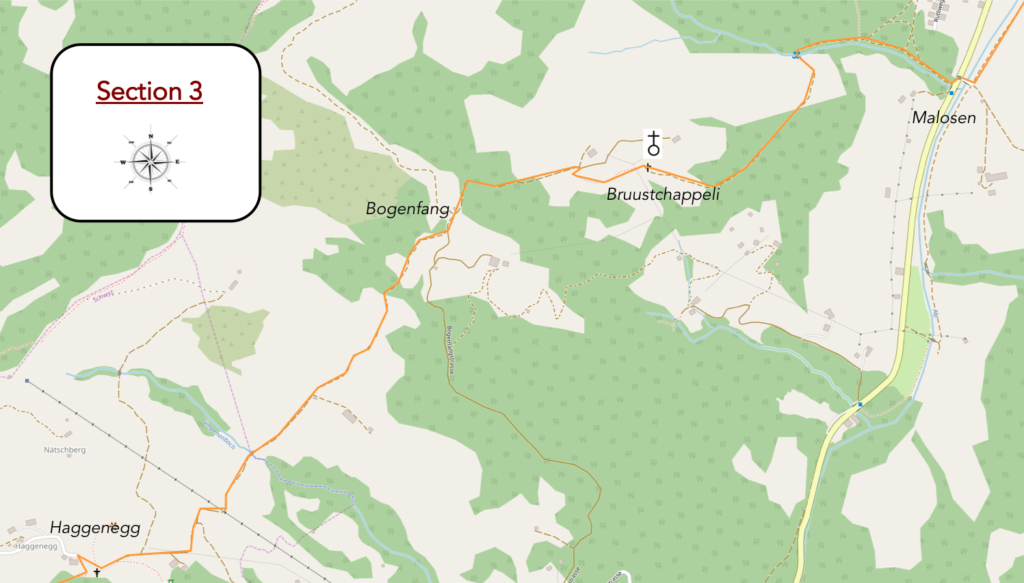 General overview of the difficulties of the route: at 15%, and often well above, with some flat areas to catch your breath. Very demanding course. 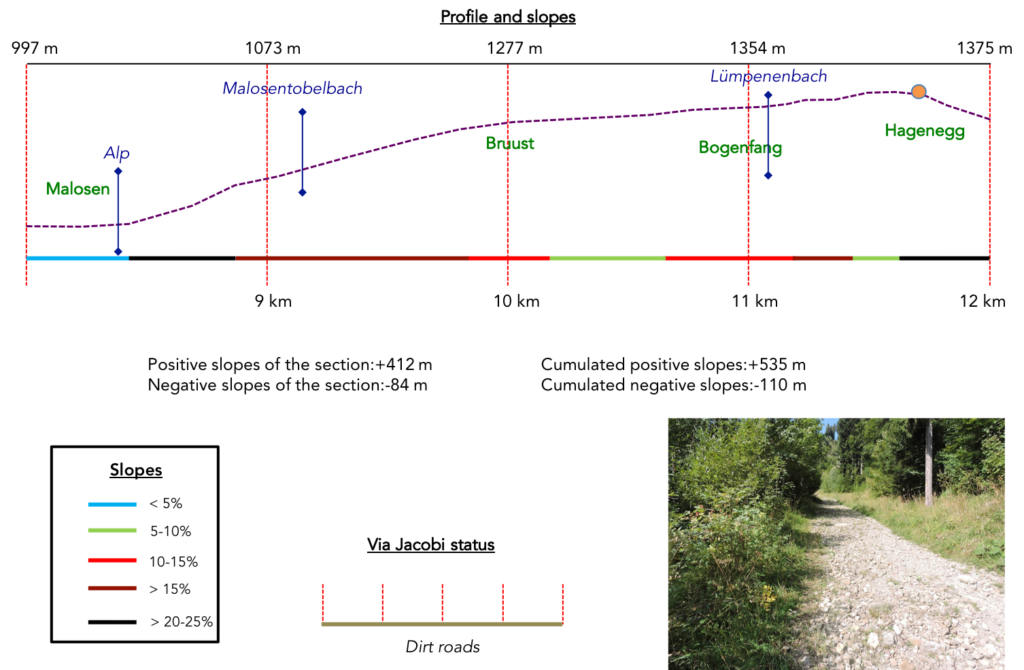 Here you come to a place called Malosen. The holidays are over, here work can begin. 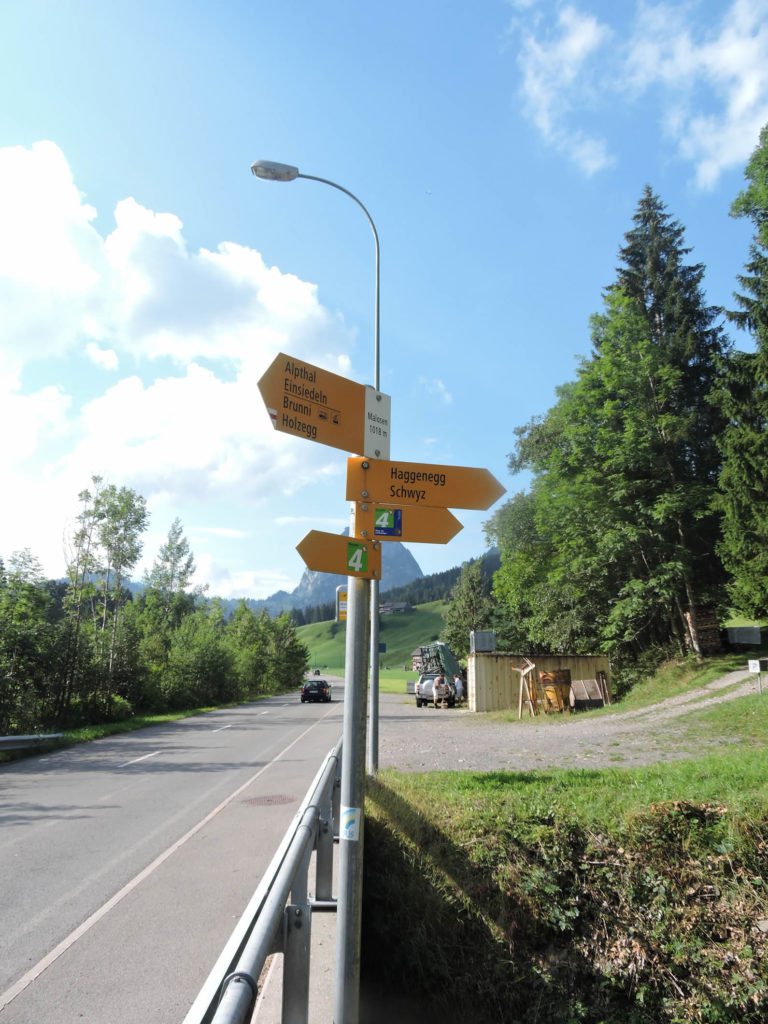 Above now stand out, magnificent, the two Mythens mountains. Admittedly, it is not the Matterhorn, but it is almost as beautiful, in any case almost more human. Close to the mountains, you can see the small alpine chalets where the track runs. The Mythen are not high, less than 2000 meters above sea level. 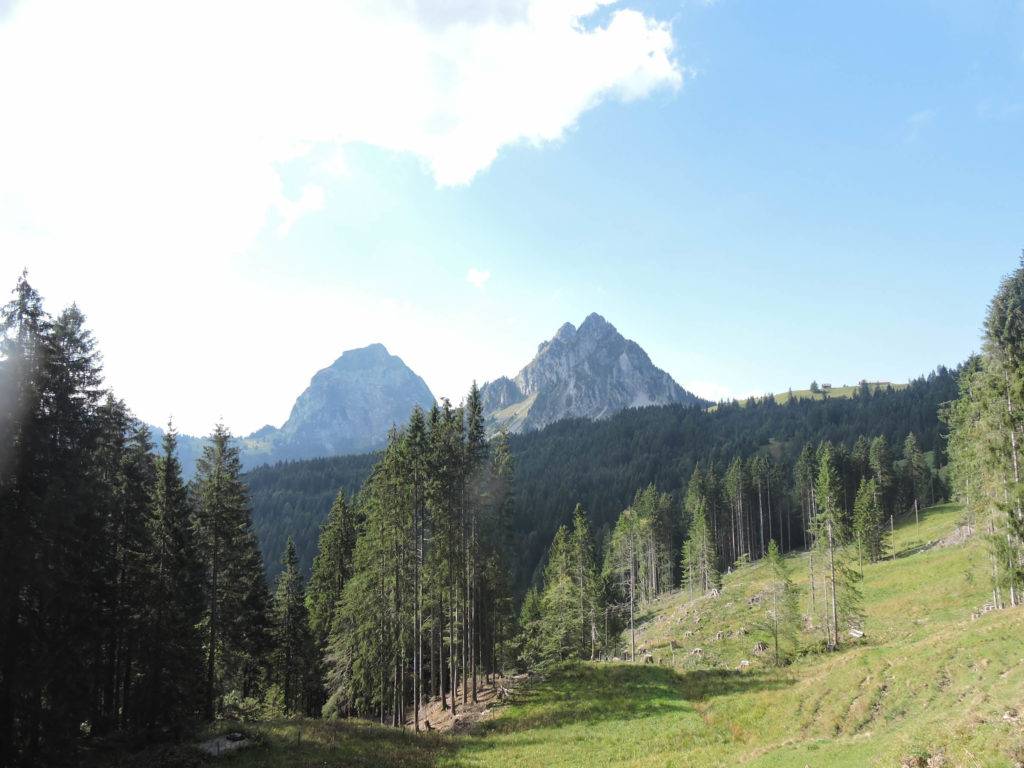 A small road climbs from Brunni from the bottom of the valley and a picnic spot, like there are many in the region, is available to the inhabitants. Is there a booking plan for this kind of hospitality? Here, you arrive by car on a bad road. 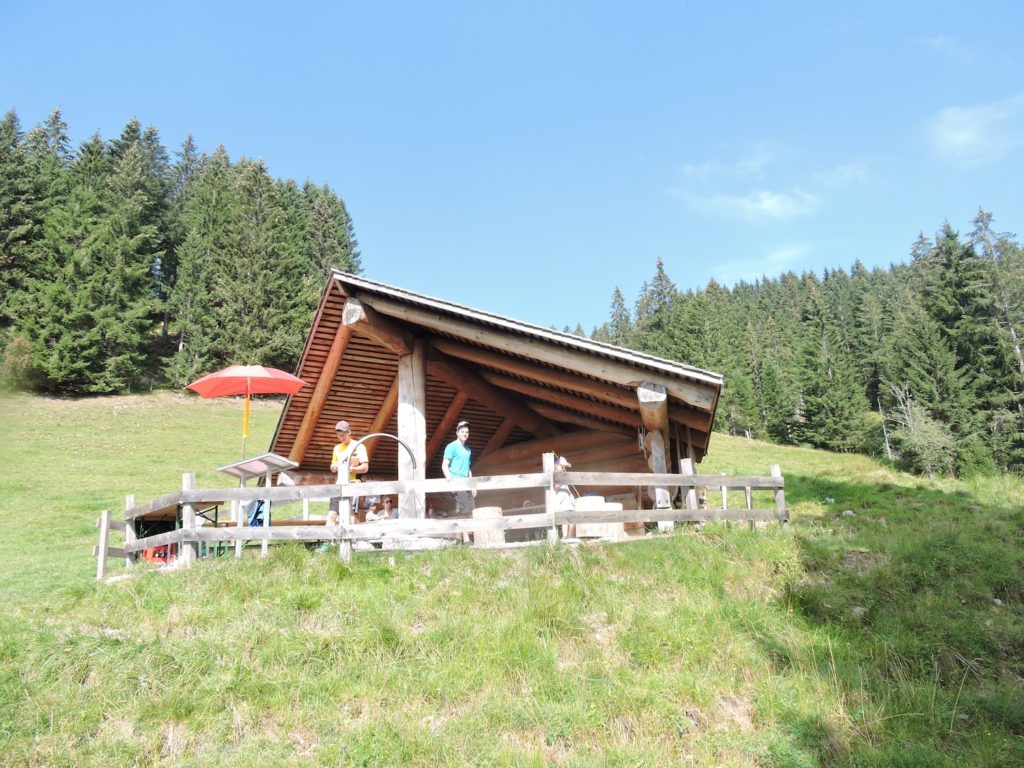 In winter, skiing is done here, at the foot of the two Mythens. 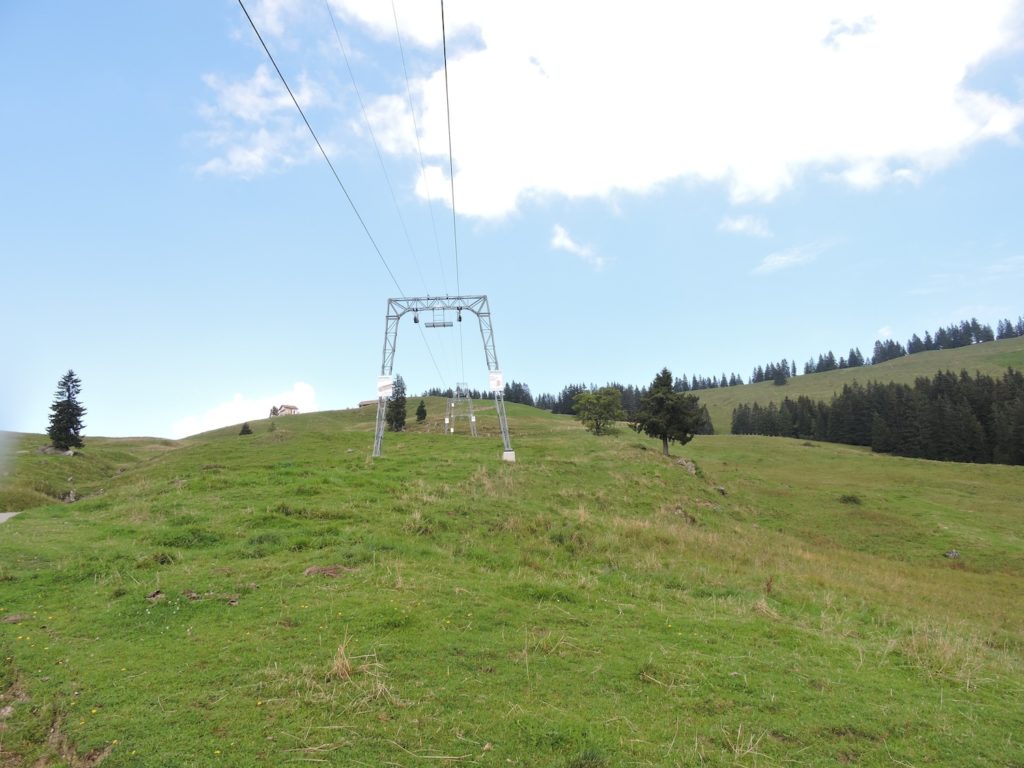 Section 4: A slide, or rather a springboard for the valley. 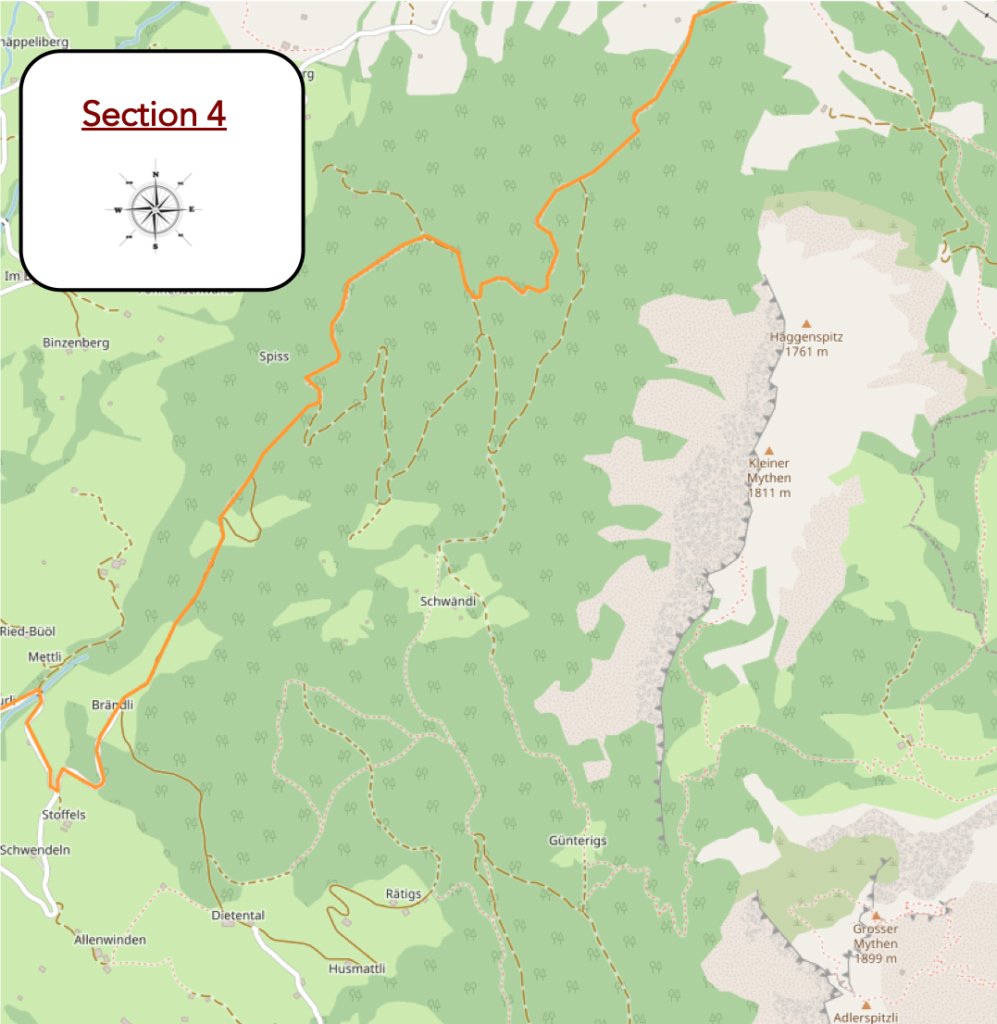 General overview of the difficulties of the route: : at 15%, and often well above, with some flat areas to catch your breath. Very demanding route, one of the toughest on the Way to Compostela in Switzerland. 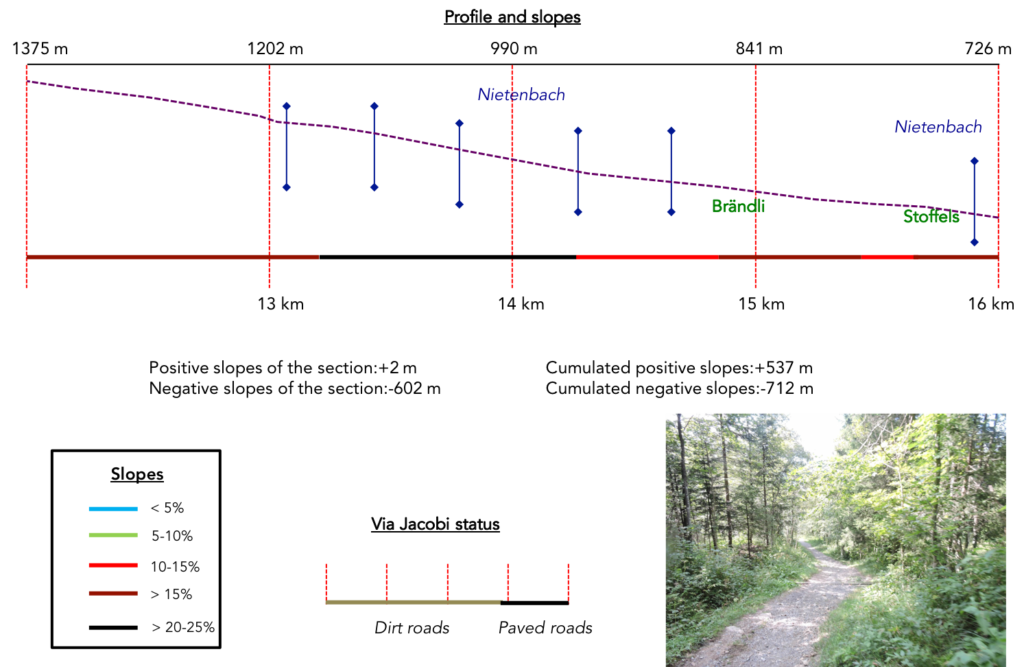 Above the Mythen are shrouded in mysteries. 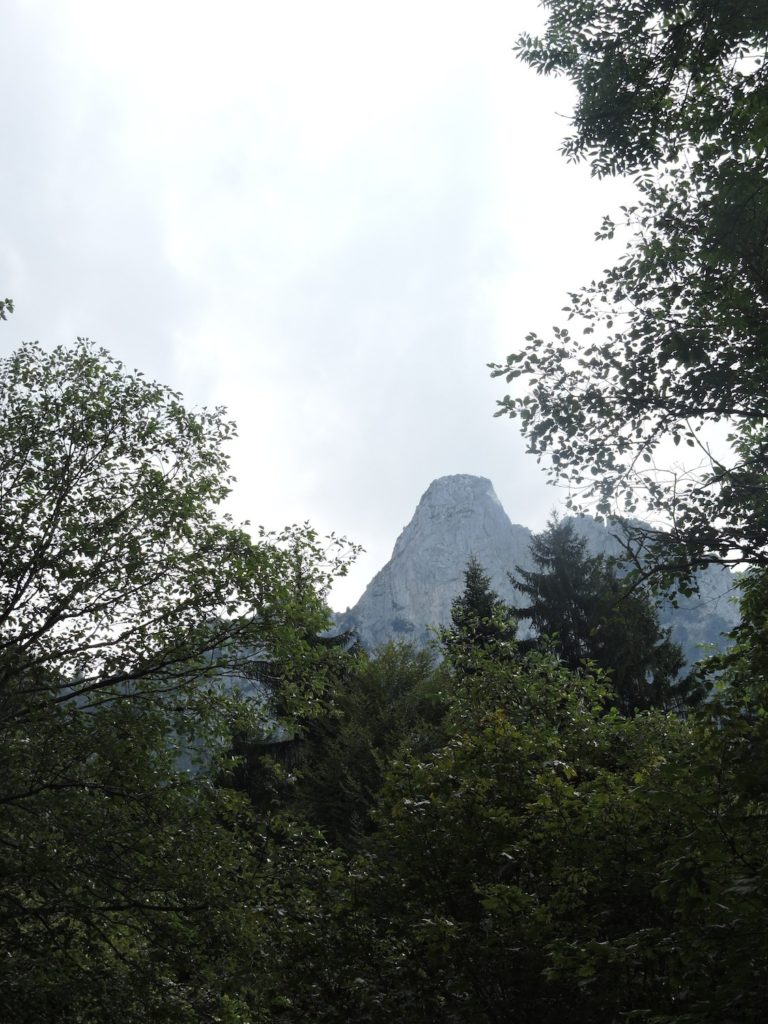 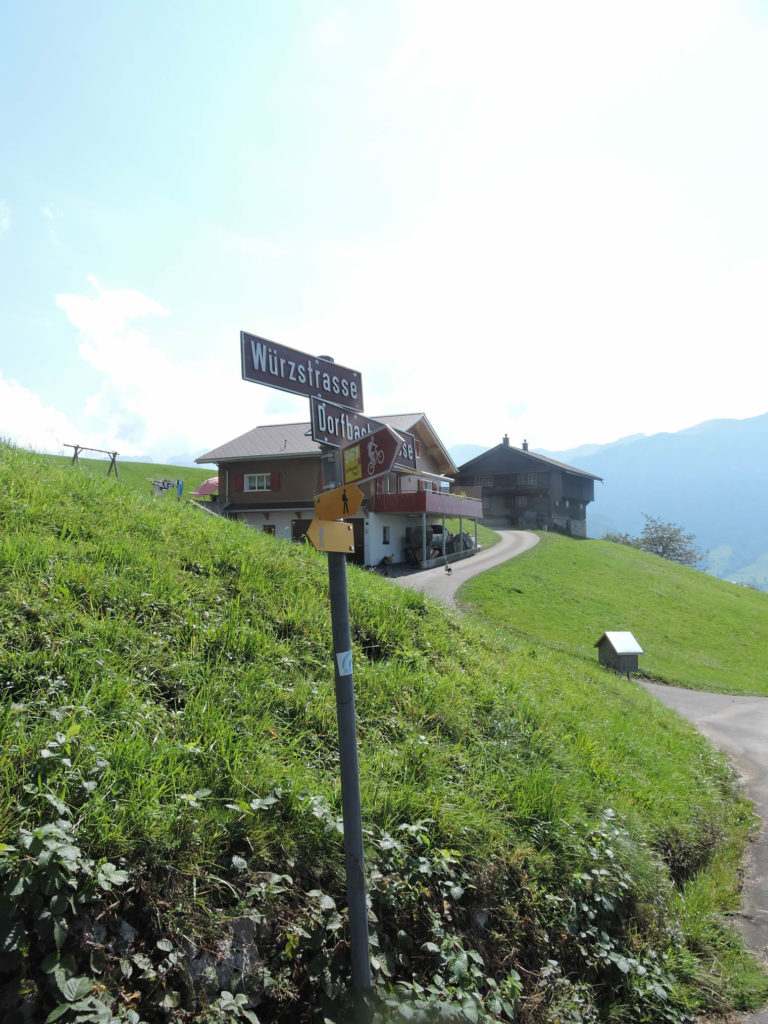 Section 5: A little penknife at Victorinox, between Schwyz and Imbach. 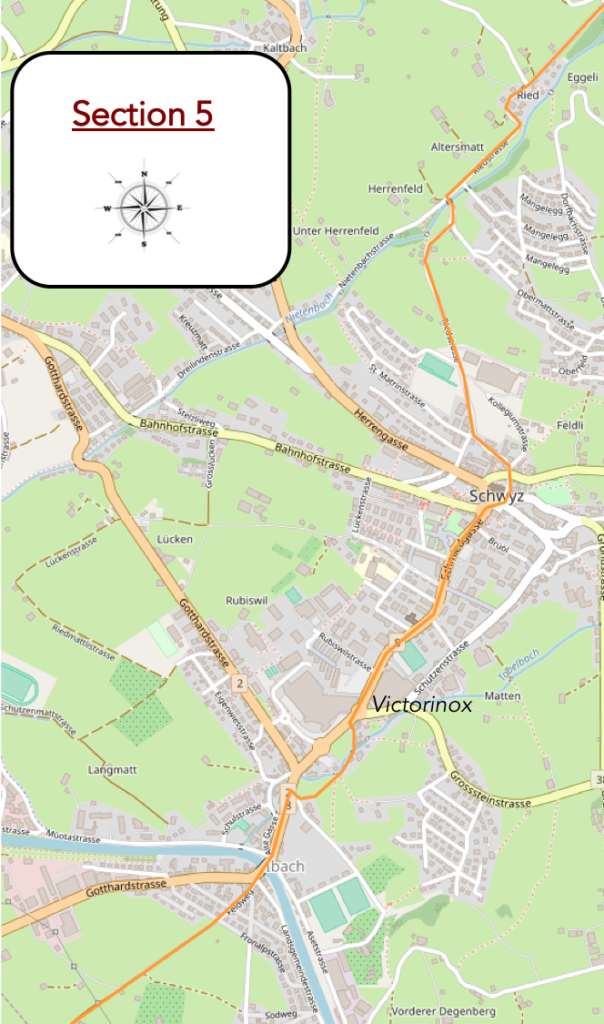 General overview of the difficulties of the route: : it slopes down again, with some pretty slopes, but you can see the end of it. 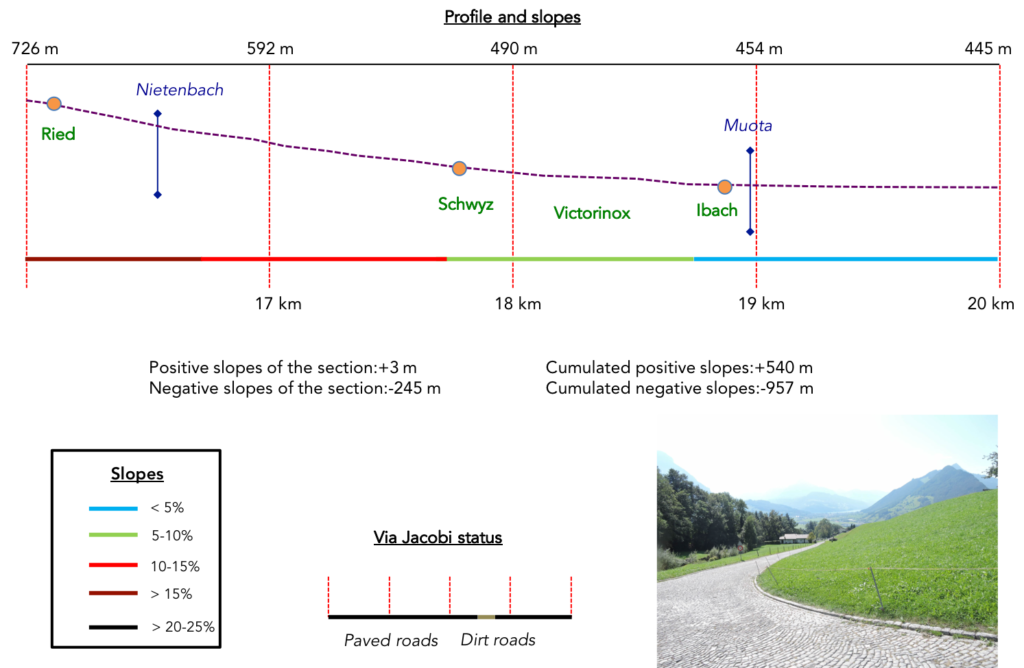 Here, the waterfall is cool, and the water draws lines like combs. 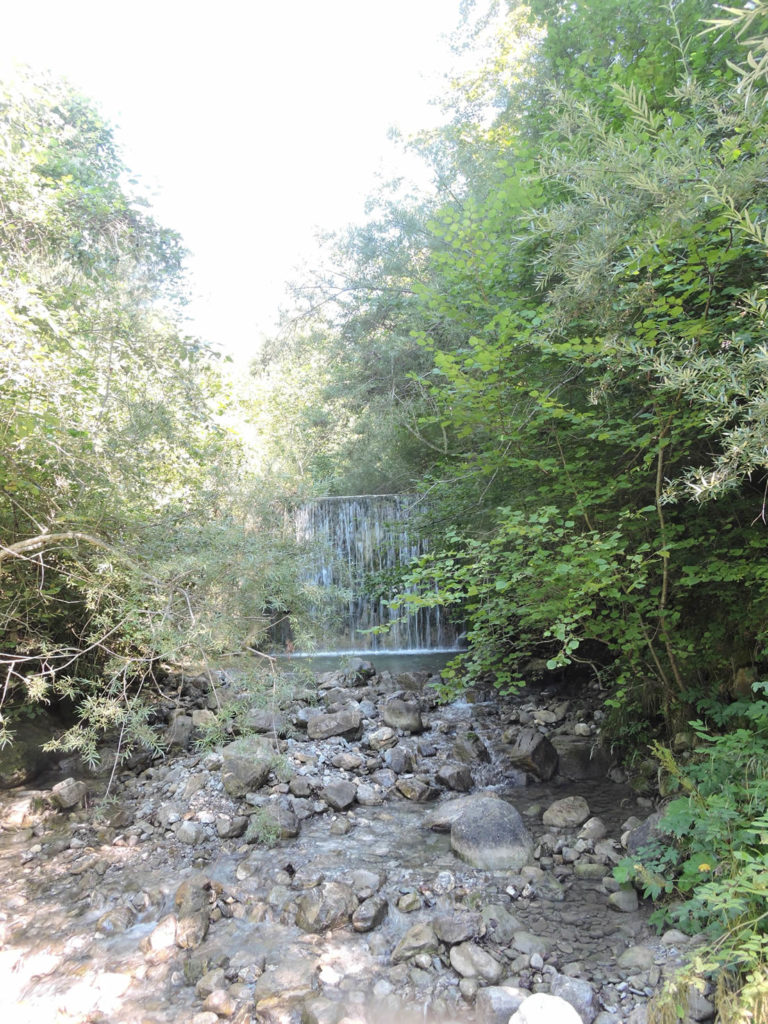 If you glance above, you see the Mythen towering over the valley from this side as well. 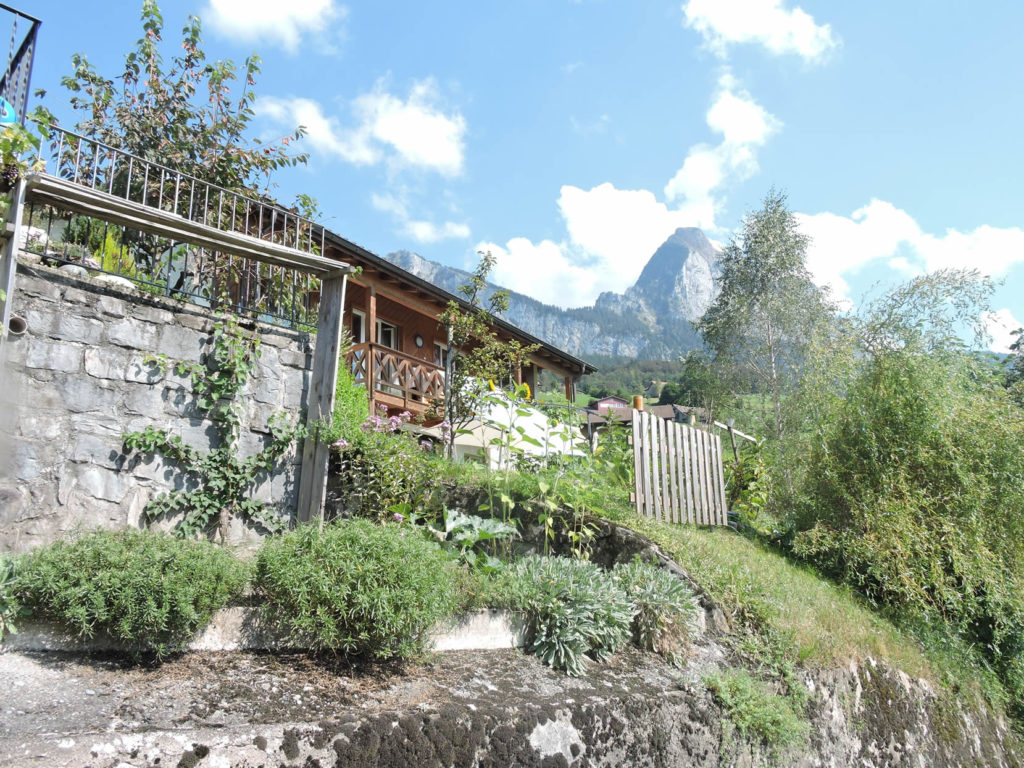 On the other hand, the baroque town hall of the XVIIth century, with its paintings on the facade illustrating the battle of Morgarten, is remarkable. The building was burned down and then rebuilt. Its current facade dates from the end of the XIXth century. It houses, among other things, the council rooms, the public balance and also the municipal prison. But this building is in an environment that will be said to be disappointing, not to say worse. 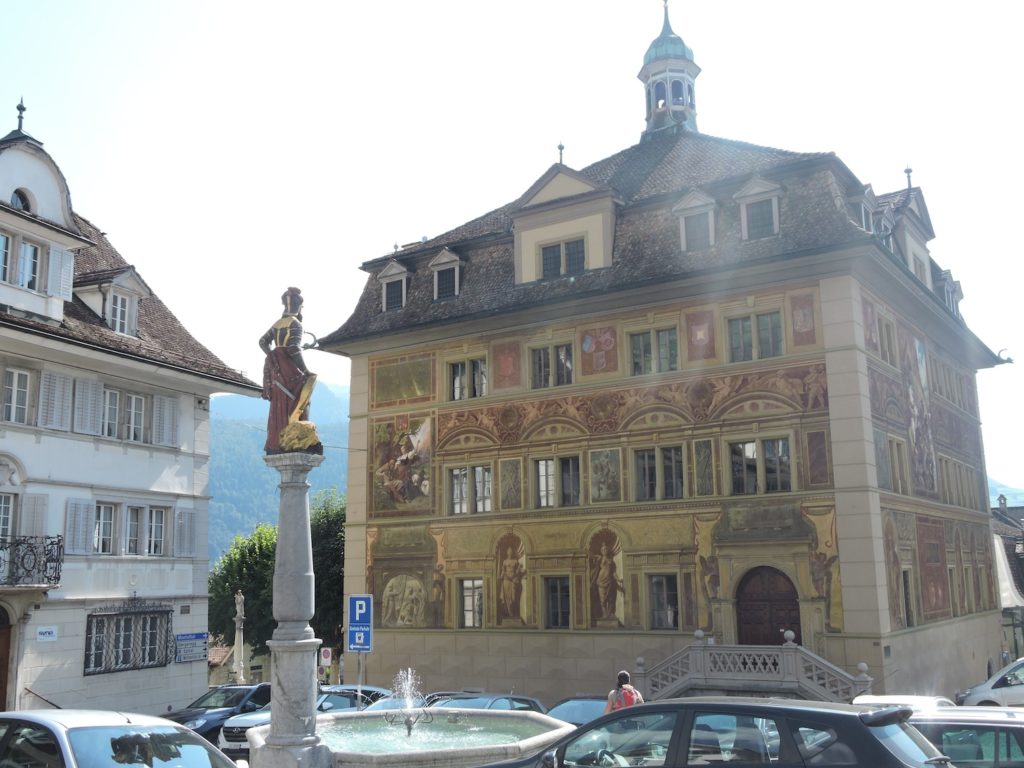 There is money here to see the shopping center that borders the national road. 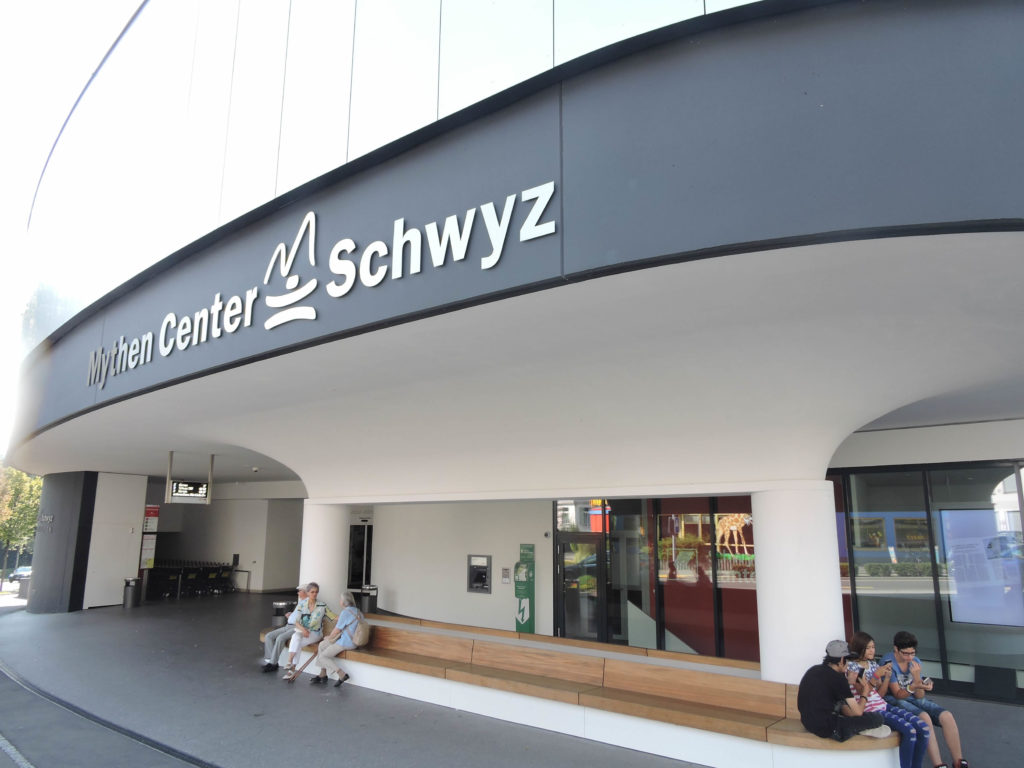 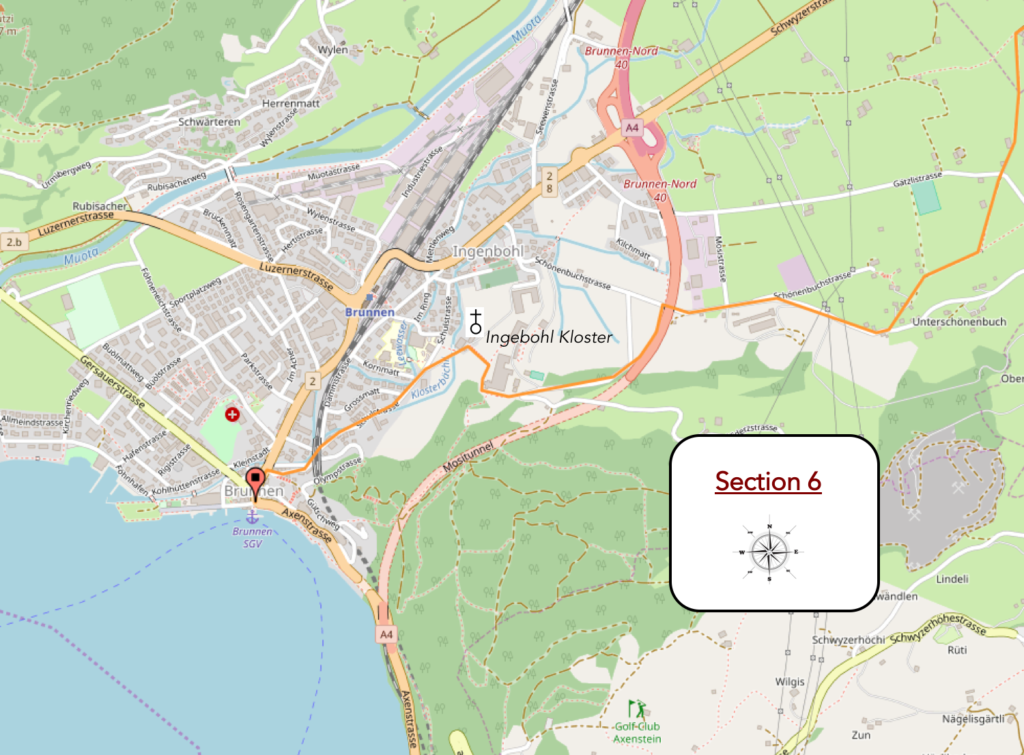 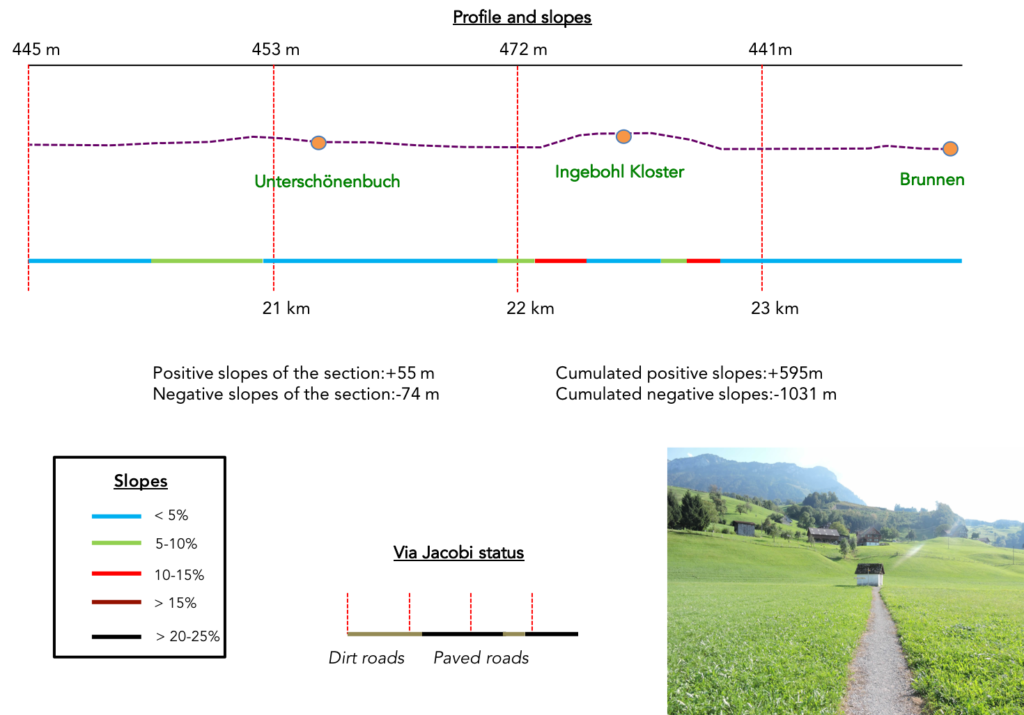 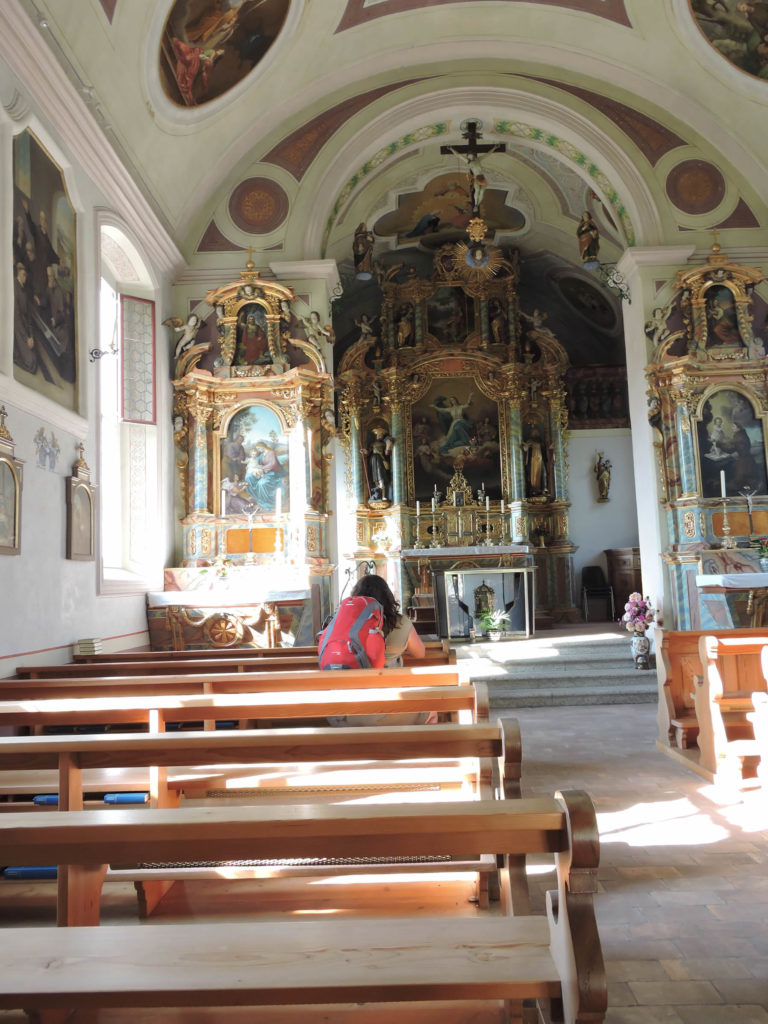 Next stage: Stage 6: From Brunnen to Stans

Back to the menu