In the heart of primitive Switzerland 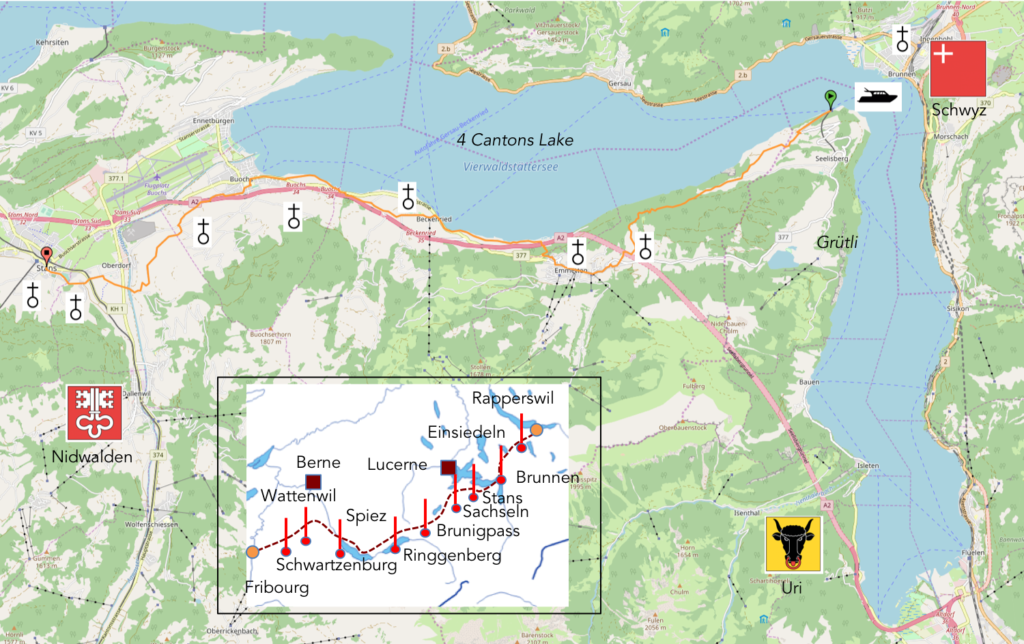 The pact of August 1, 1291 is considered the founding act of the Swiss Confederation. The inhabitants of the three valleys of Uri, Schwyz and Unterwalden, oppressed by the bailiffs of the Habsburgs, swore to put an end to the exactions of which they were the victims. The pact merges with the tradition of the oath of the Three Swiss. Arnold de Mechtal, from Unterwalden, wants to punish the bailiff who has come to confiscate his father’s oxen. He joined in the meadow of Rütli (or Grütli), above 4 Cantpns Lake, Walter Stauffacher of Schwyz, and Walter Fürst, of Uri, who would be the father-in-law of William Tell, soon famous for his prowess legendary. This pact, confirmed and enriched by subsequent covenants signed at Brunnen (1315), Sempach (1393) and Stans (1481), made it possible to form an alliance to fight against the House of Habsburg. It was gradually extended to other communities to give birth to the Switzerland of 8, then 13 and 19 cantons. The original of the pact is in Latin. In 1891, on the occasion of the seventh centenary, the event was celebrated for the first time. This is the origin of the Swiss national holiday, which is arbitrarily fixed on August 1st.

A few years after the initial pact of 1291, the Waldstätten, who had sided with Louis of Bavaria against the Habsburg, were attacked by the Duke of Austria, Leopold I. On November 15, 1315, the Cantons laid an ambush in the defile of Morgarten and the Habsburg cavalry was crushed under rocks and tree trunks (1,500 killed). A few days later, the three Cantons renewed their alliance at Brunnen. The text of the pact was very close to the previous one. Similarly, towards the end of the century, the victory of Sempach over Leopold III made it possible to consolidate the Alliance.

Reality or myth, history wanders between the two avenues. Historians have long known that there was nothing extraordinary or exceptional about the 1291 Covenant. First, it was found by chance in 1724 after being mentioned for the first time around 1530, nearly 150 years after the events. Then, the Waldstätten had not been the only ones to produce this type of document, because it was a common practice at the time in many countries. This pact was more about the economic security of the Gotthard trade route than about external security, speaking neither of freedom nor of resistance. From time too, everyone guessed that the stories of William Tell were only myth and had no historical reality. As for the Rütli oath, it may have existed, but probably not as it is said. Nobody knows if the initial pact really existed. Copies have been made and the originals, if they exist, may have disappeared. Fires were the rule in these small villages. The national holiday and the choice of the first of August date from 1891, not 1291. The fact remains that these valiant mountaineers joined forces to fight the Austrians, and they won.

Difficulty of the course: The course takes place between forests, villages, boroughs and lake, on quite marked slope variations (+763 meters/-714 meters). You climb as much as we slope down. It is still a difficult stage for retirees with little training, the vast majority of those hikers that you meet on these tracks. After the boat trip to Treib, you have to climb to the top of the Seelisberg mountain, and it is not an easy task, with sometimes slopes greater than 30% under the cliff. And then, there is this terrible descent (and the word is not strong) towards the lake beyond Emetten. Thereafter, the walk is pleasant by the lake and on the foothills leading to Stans, the capital of the canton of Nidwalden.

Section 1: Not far from the Rütli, the myth of Helvetia. 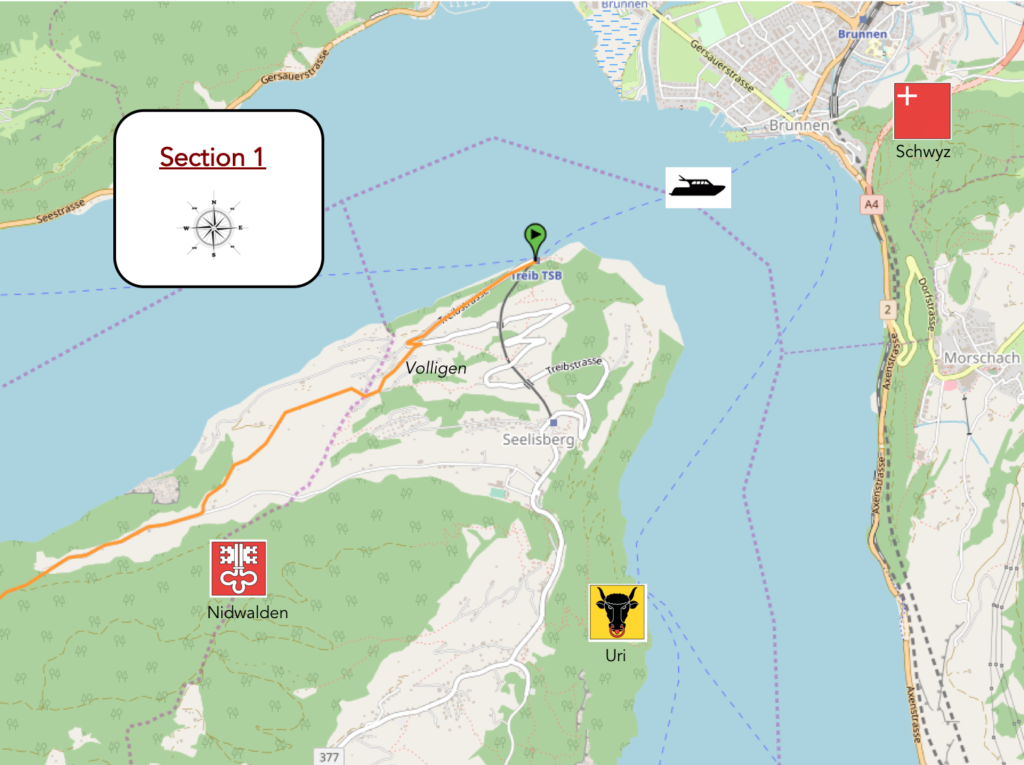 General overview of the difficulties of the route: difficult route, with slopes often significantly greater than 15%, under the cliffs of the Seelisberg. 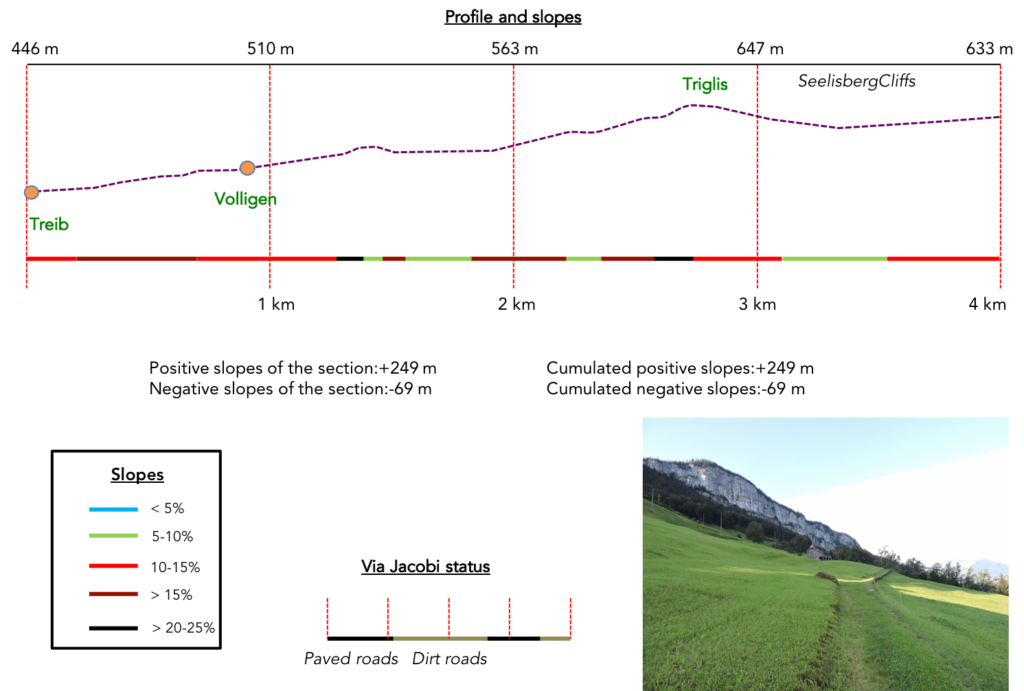 Section 2: In the cliffs of Seelisberg. 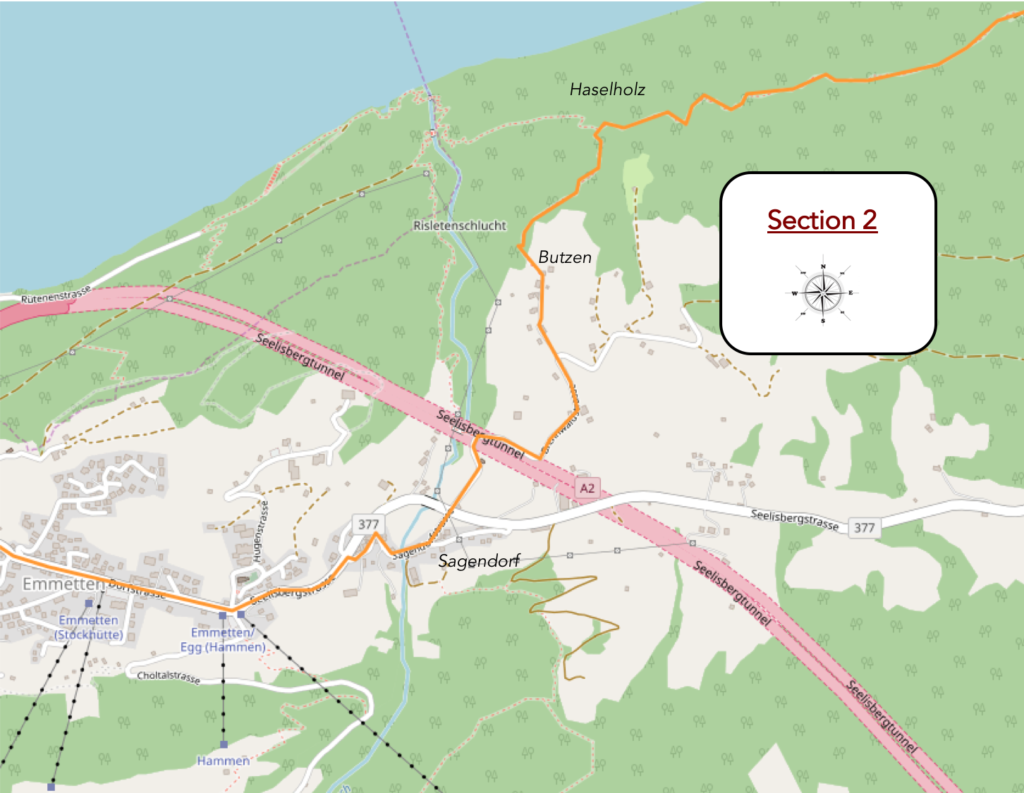 General overview of the difficulties of the route: : difficult route, with slopes often significantly greater than 15%, in the cliffs, then leg-breaking but reasonable route towards Emetten. 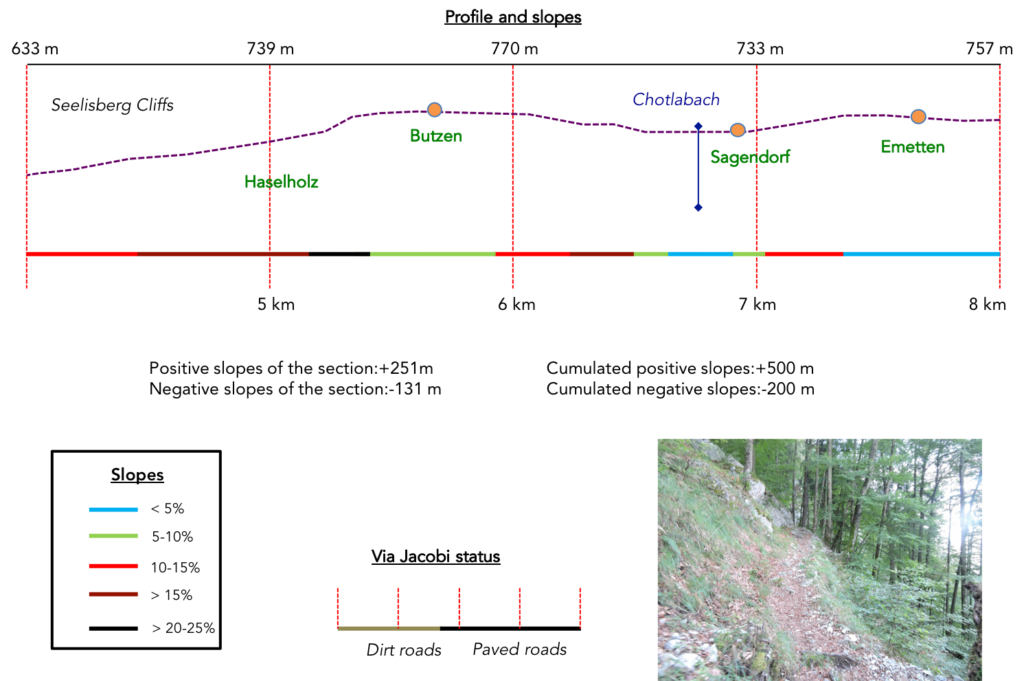 But, to cross the cliff, the slope is very steep, often more than 30%. Some passages that the path takes could make you think of high mountains, on small stairs protected from the void by barriers. 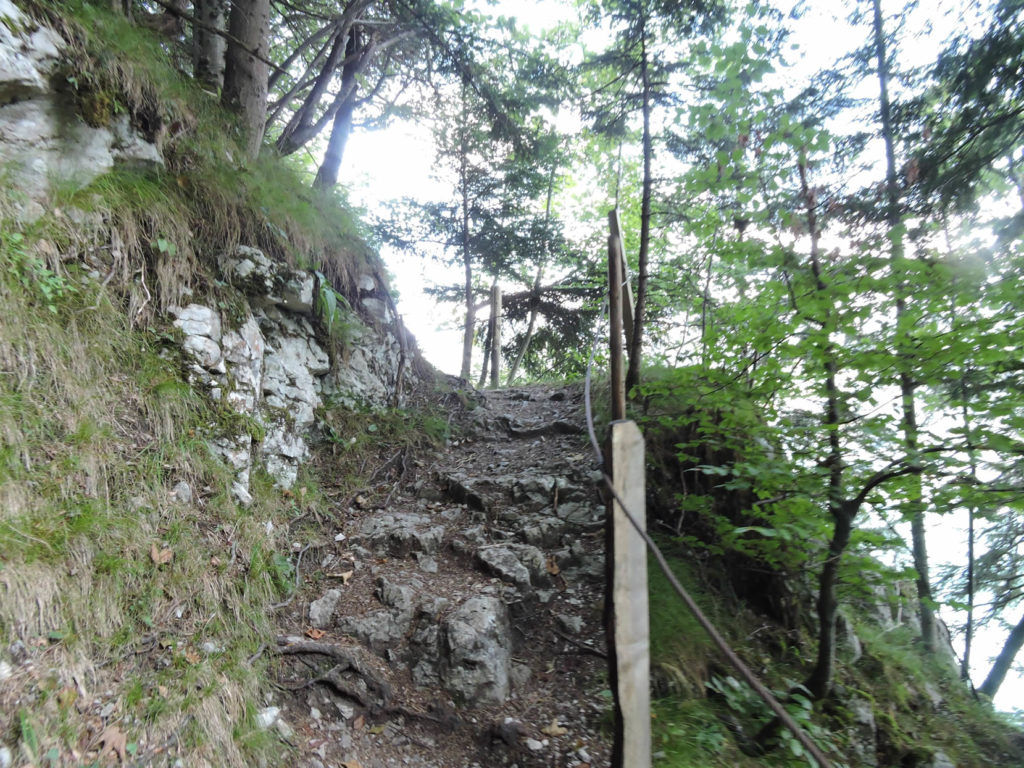 If you are tired of the rockery, you can always rest your gaze on the lake behind the trees. 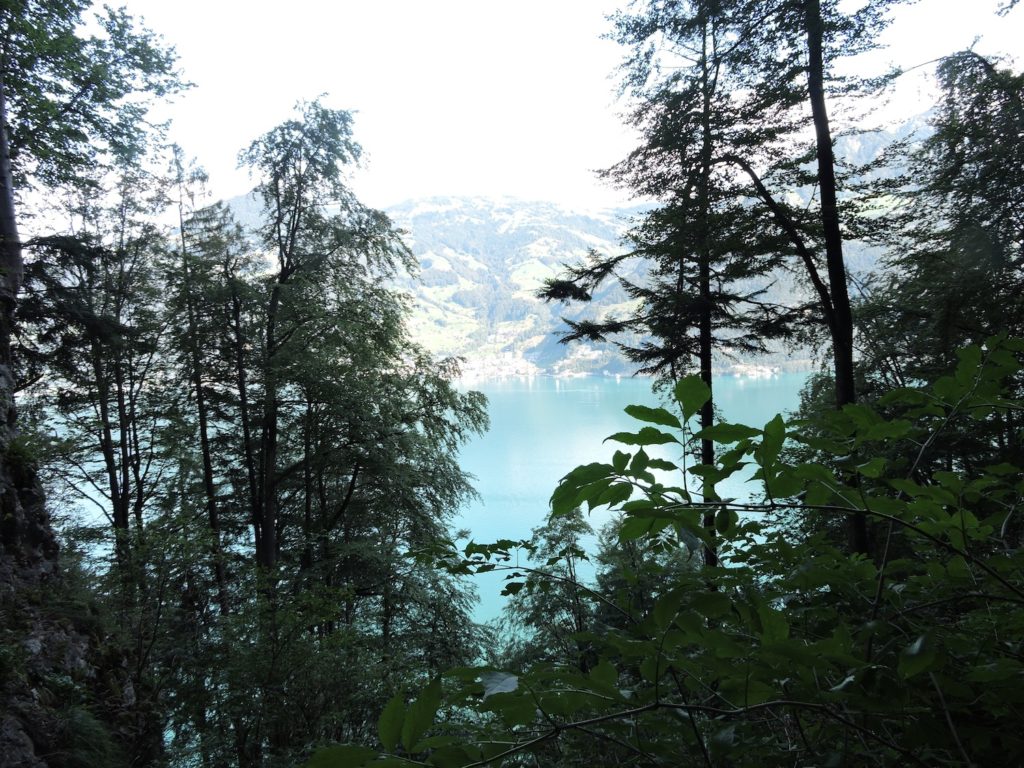 From here, the view over the lake is breathtaking. Opposite, the Rigi mountain rises above the wooded hill, where a variant of the Camino de Santiago also, which runs from Brunnen towards Lucerne. This route is also covered on this site. 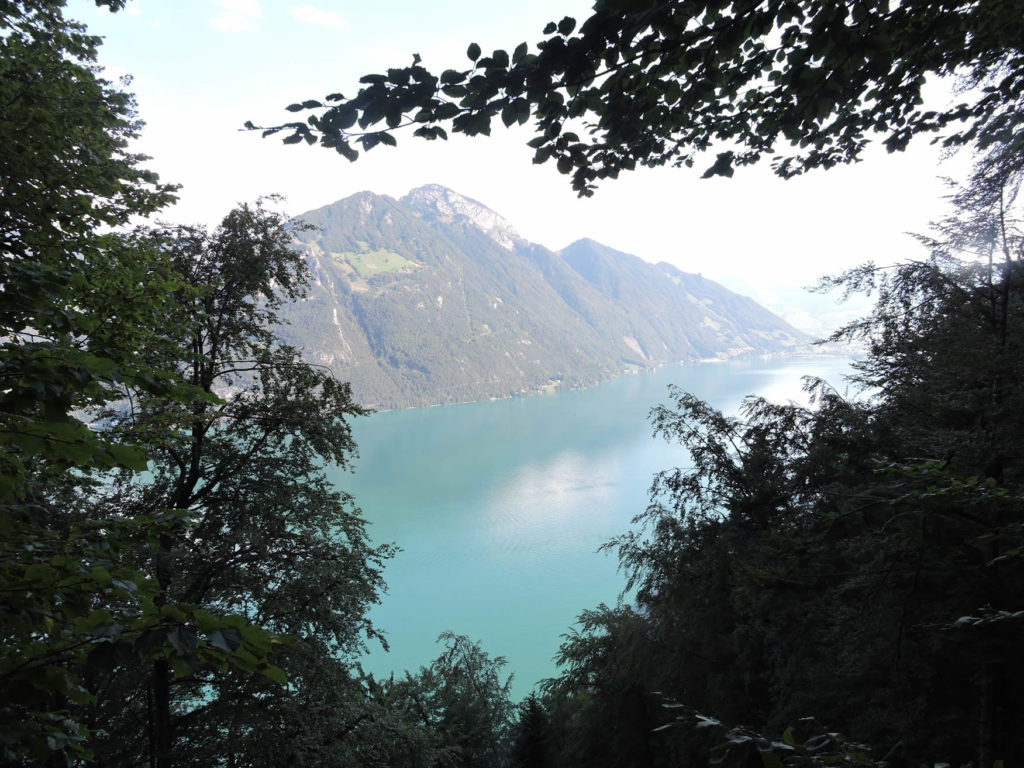 His dance of the dead is striking. 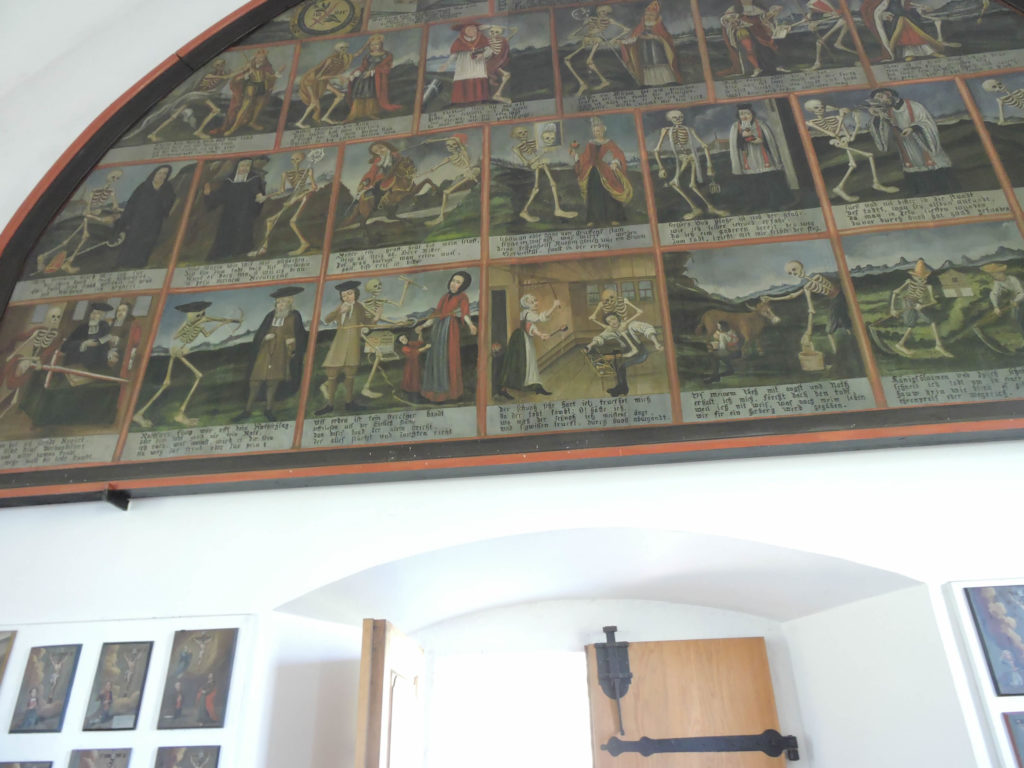 Section 3: A real springboard for the lake. 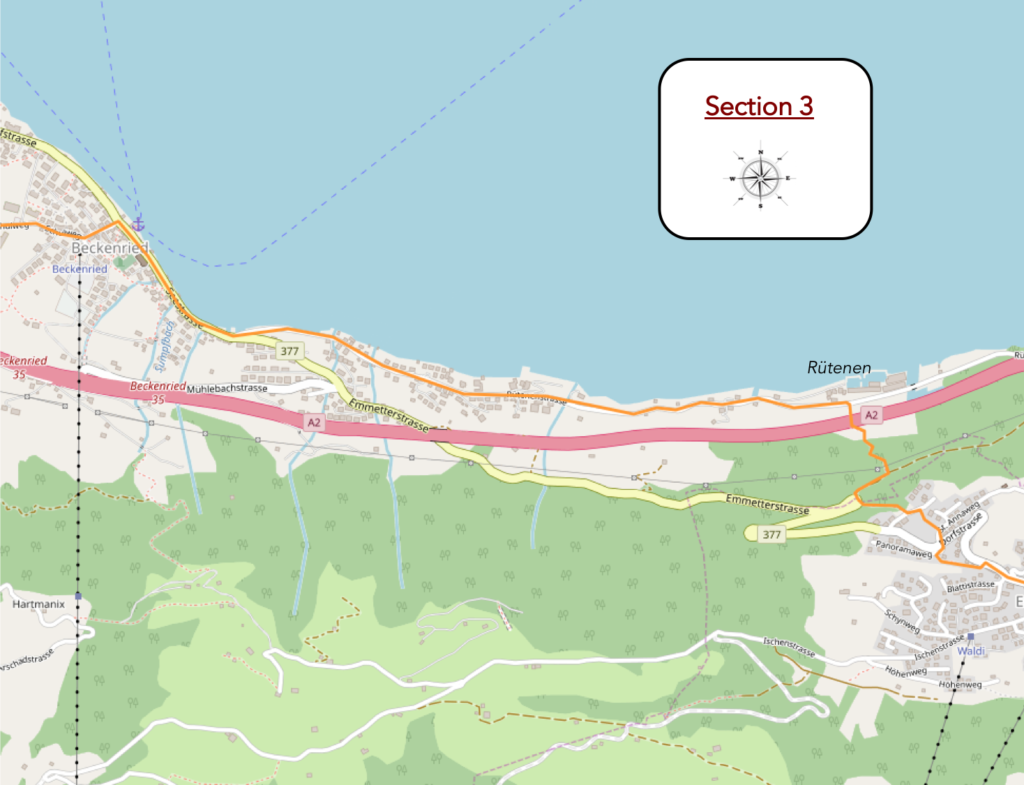 General overview of the difficulties of the route: :take flight, you will not be disappointed. 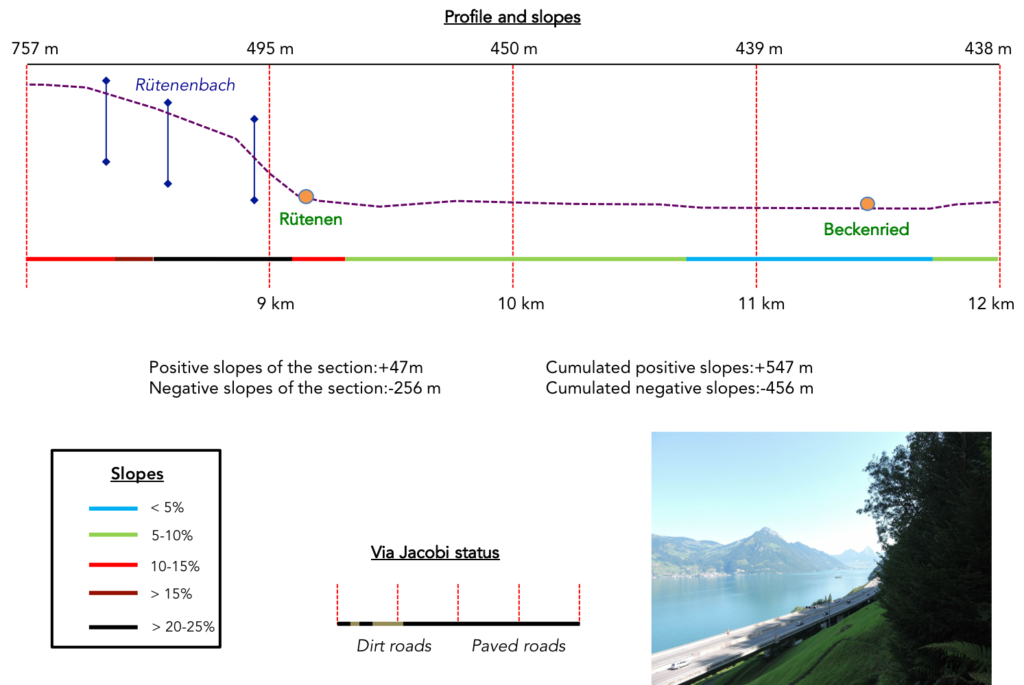 The small pathway descends again in extreme slope in the meadows, plunging on the highway which emerges from the tunnel after having passed under the Seelisberg mountain for nearly 10 kilometers. 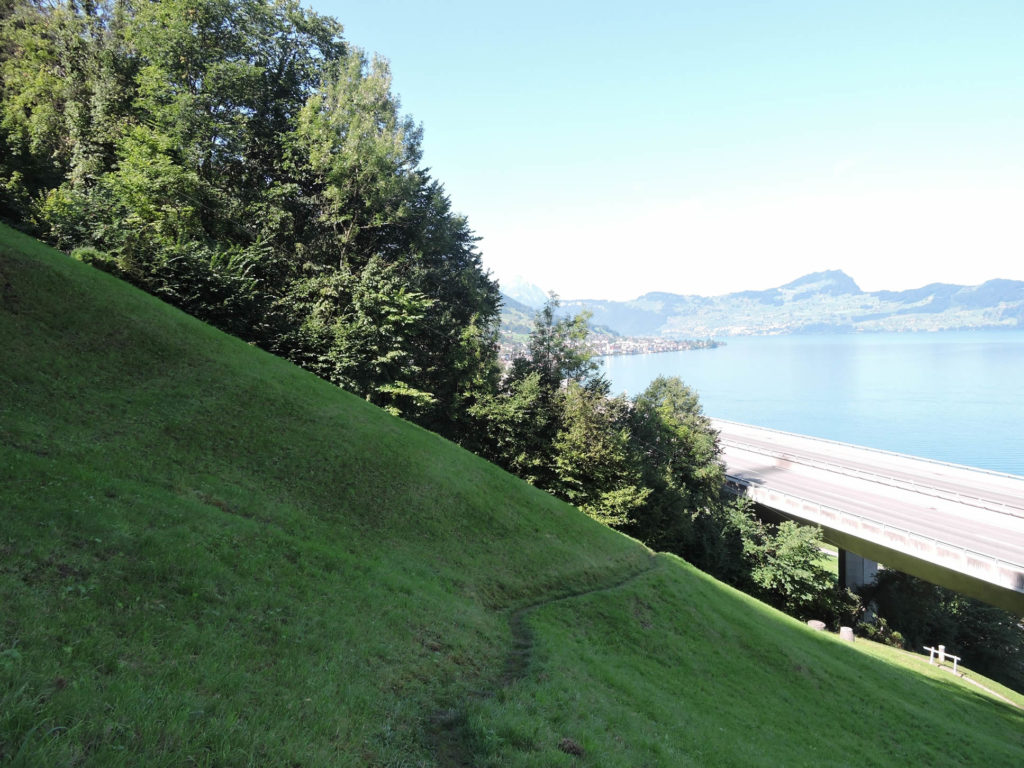 Section 4: Stroll along the shores of 4 Cantons Lake. 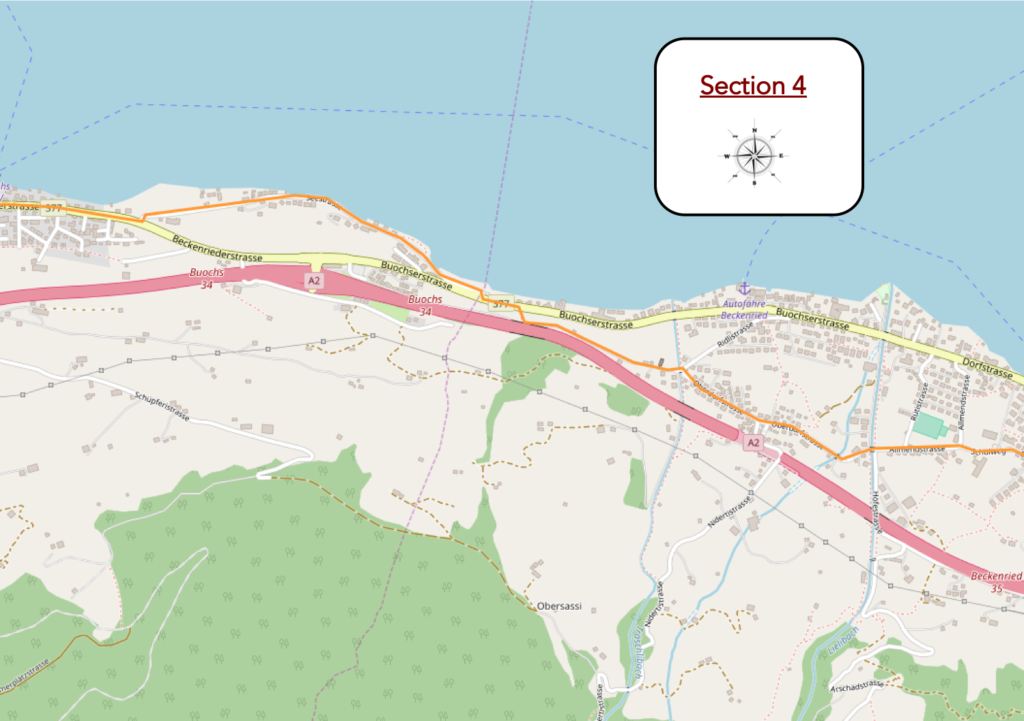 General overview of the difficulties of the route:  course without problem. 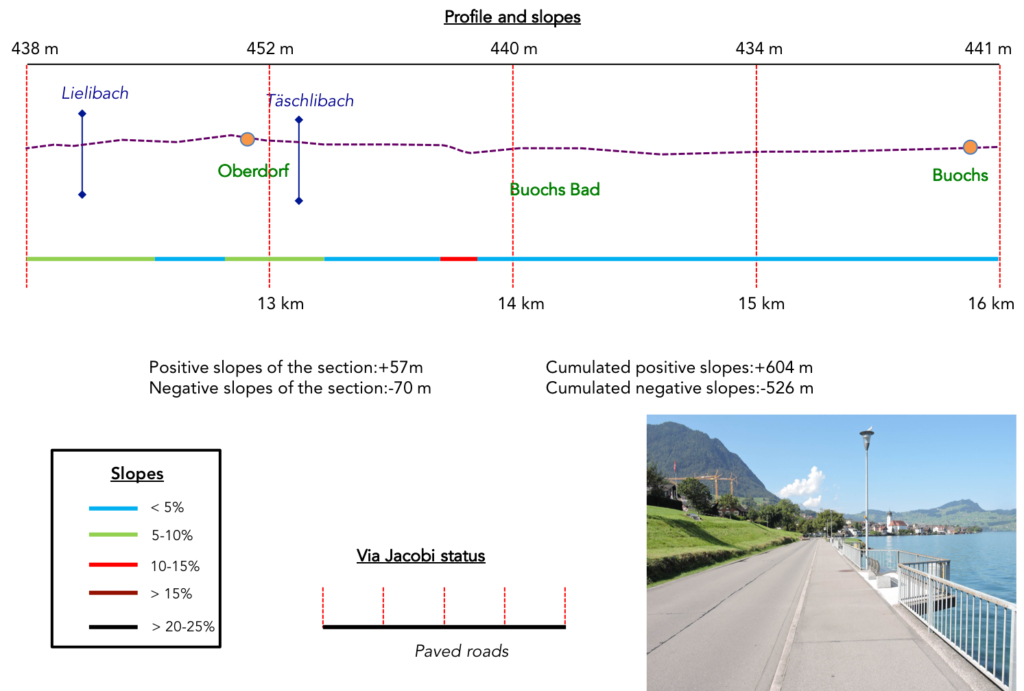 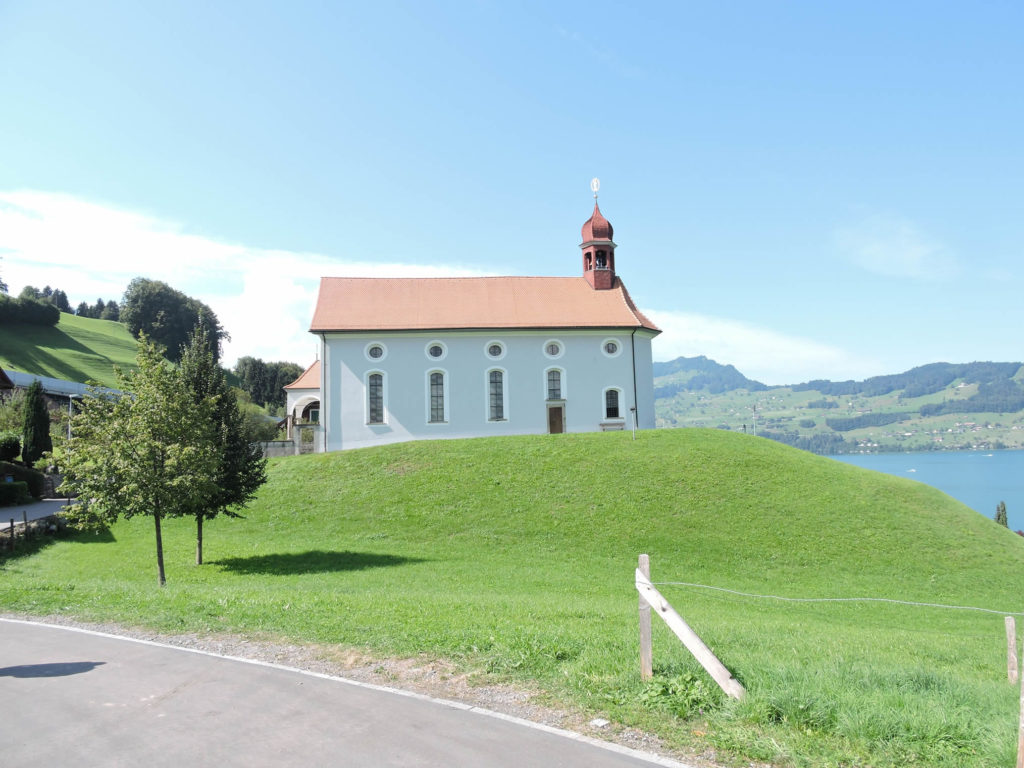 Section 5:Above the lake in the meadows. 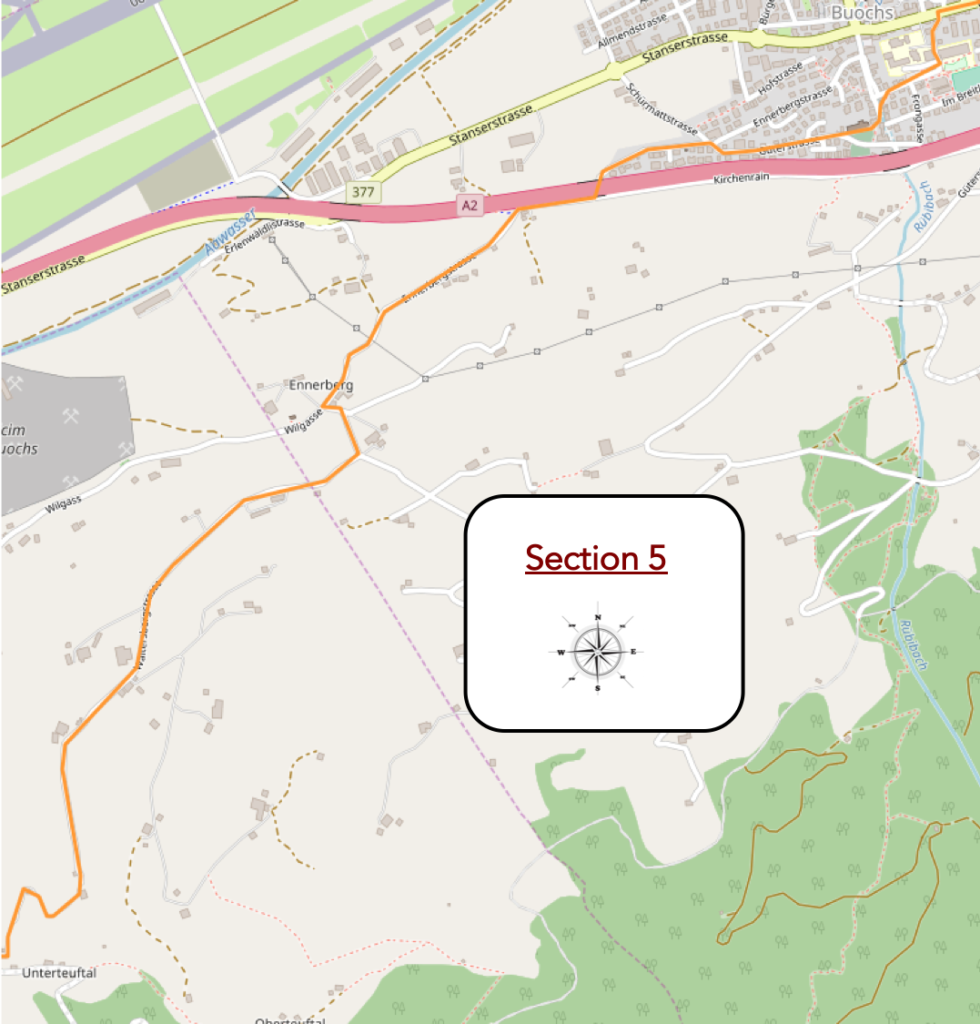 General overview of the difficulties of the route: course without great difficulty, but ups and downs all the same, with sometimes some steeper slopes. 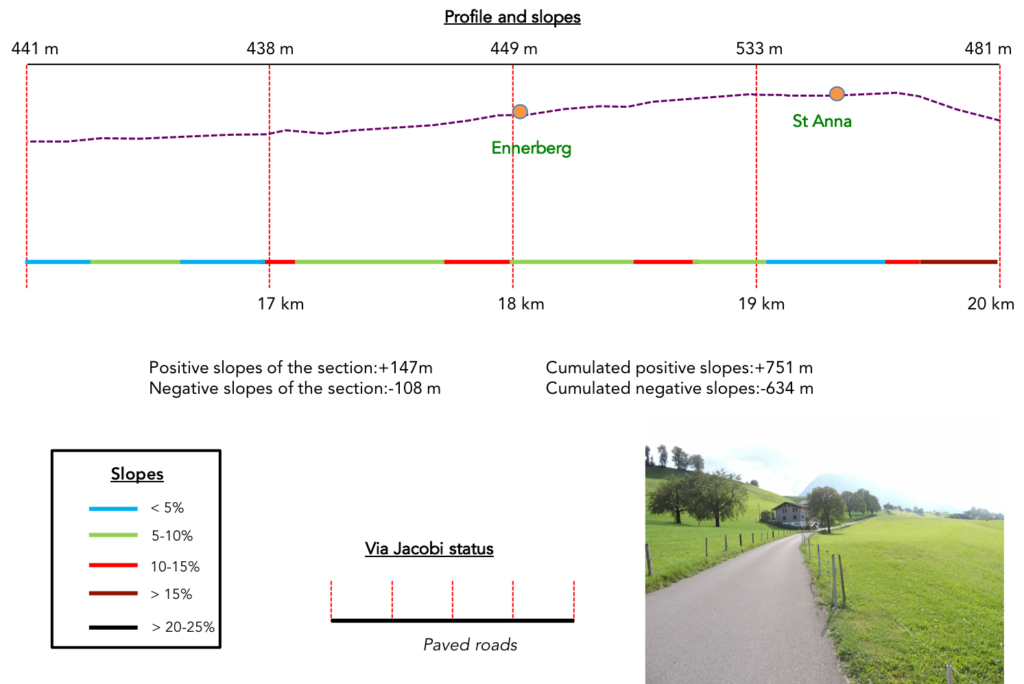 The countryside is again very beautiful and invigorating here, in the meadows that look like golf greens. 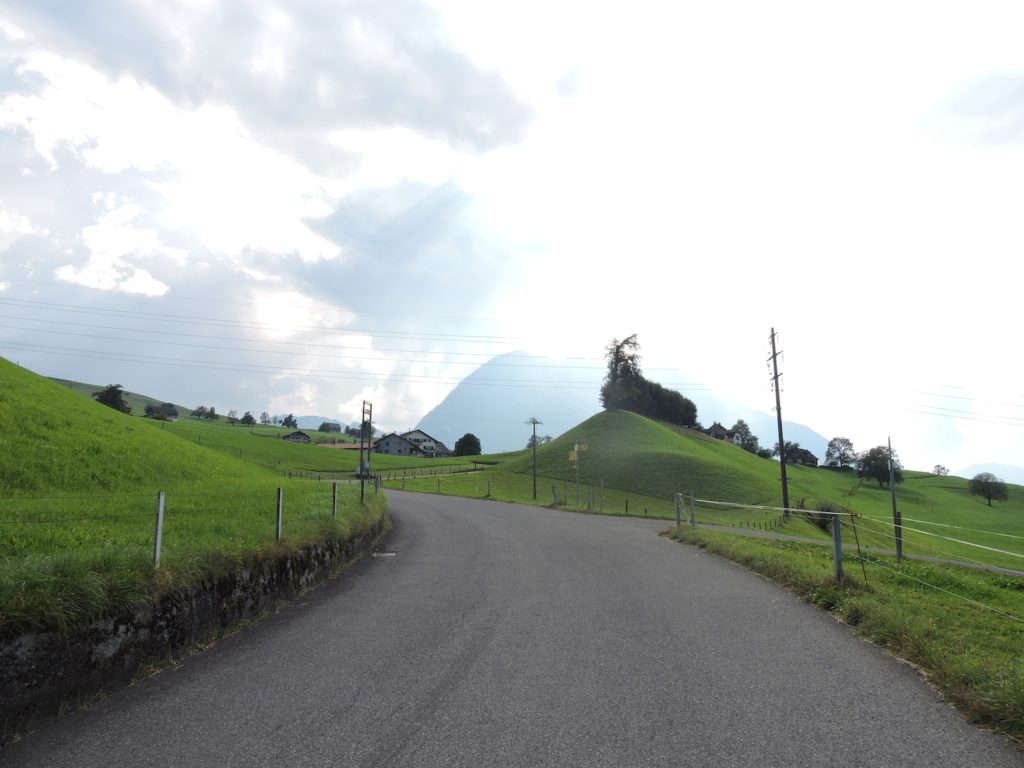 Shortly after, the road heads towards the place called Bürg, just over an hour’s walk to Stans. 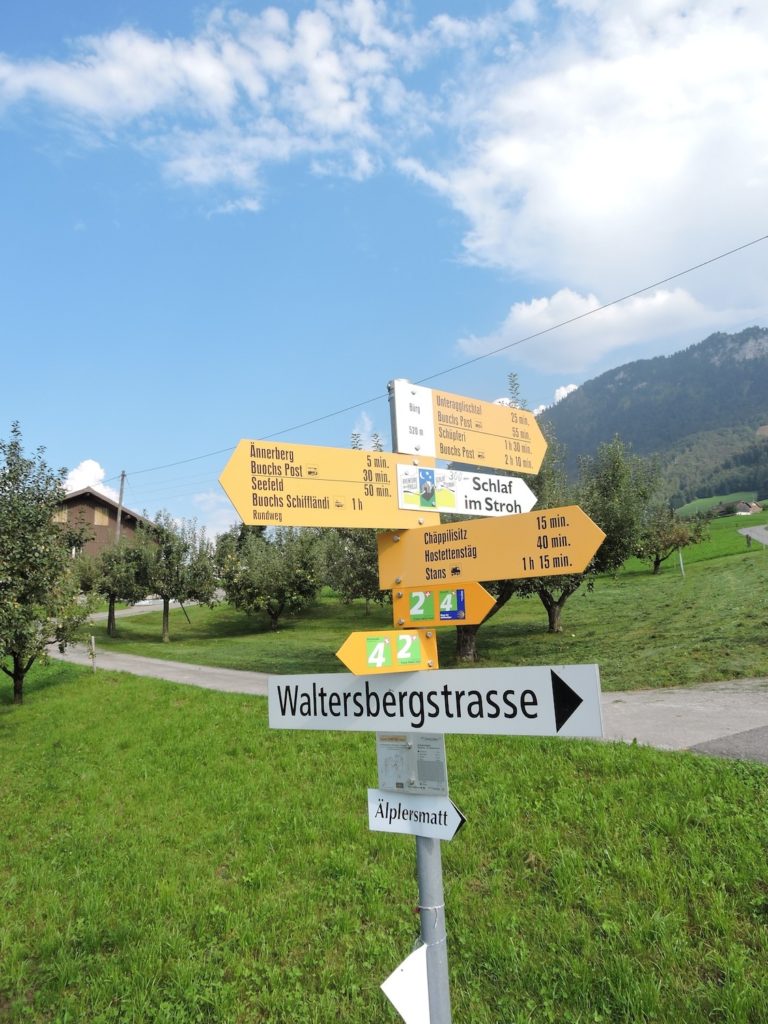 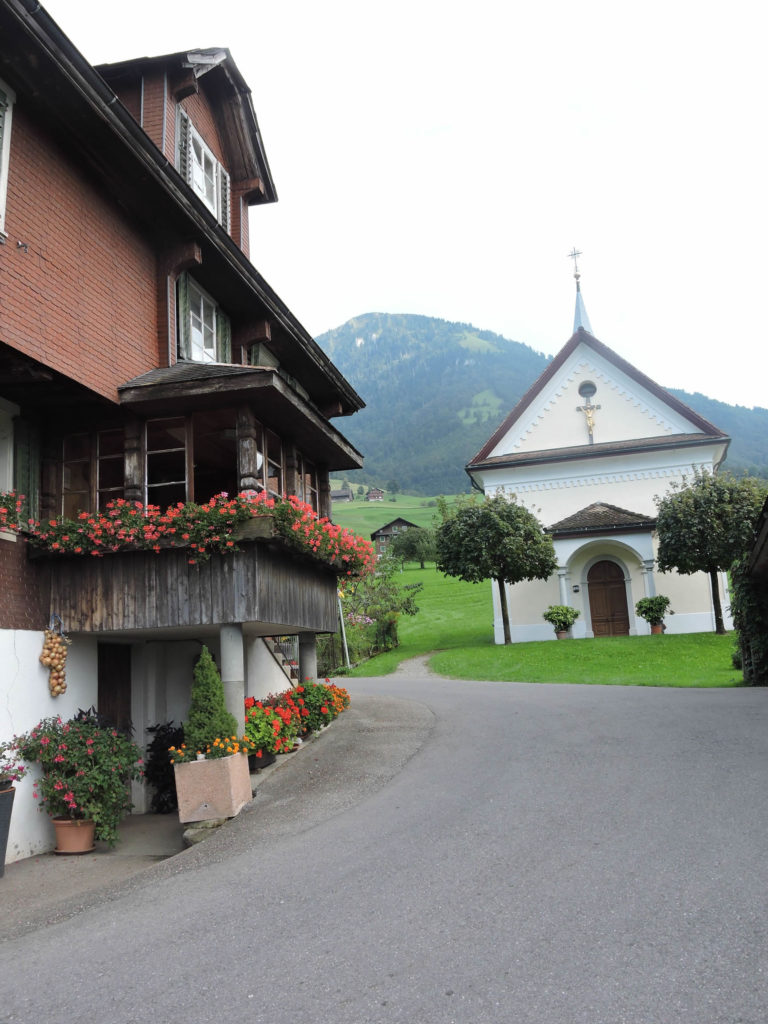 Section 6: Towards Stans, capital of the half-canton of Nidwalden. 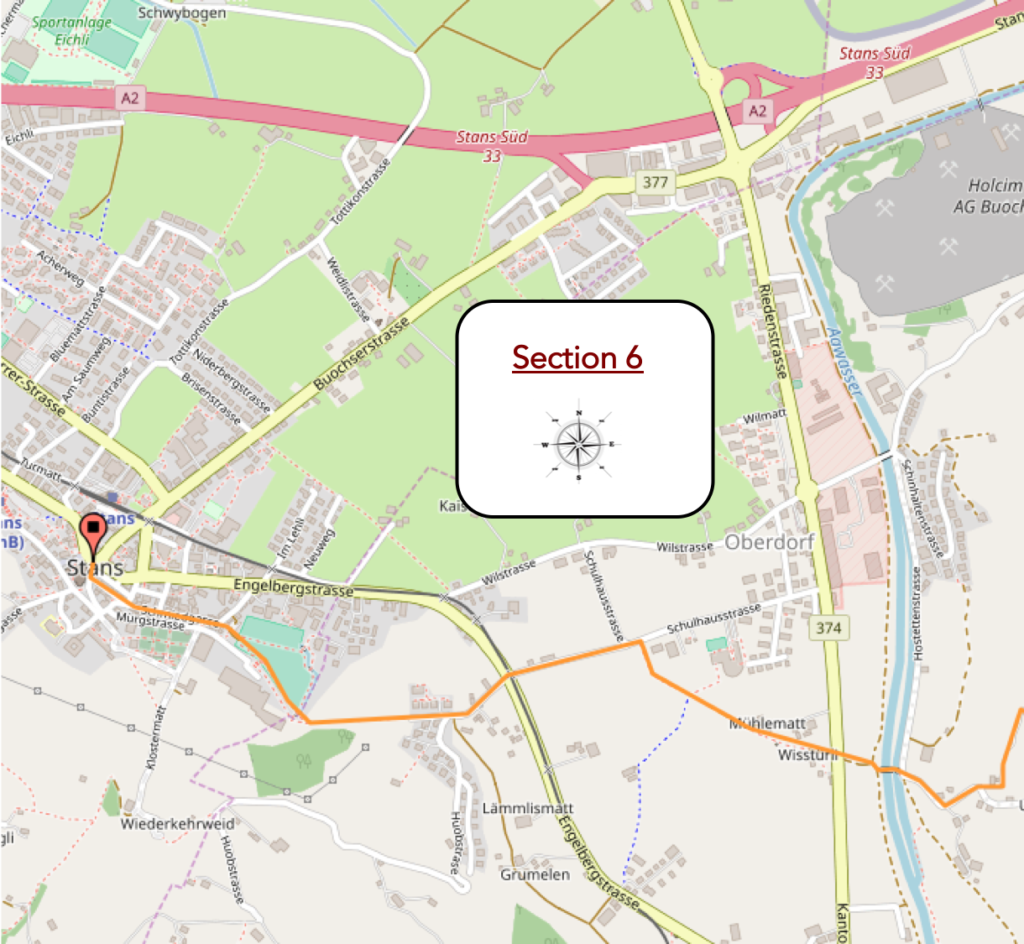 General overview of the difficulties of the route: course without any difficulty after the start descent. 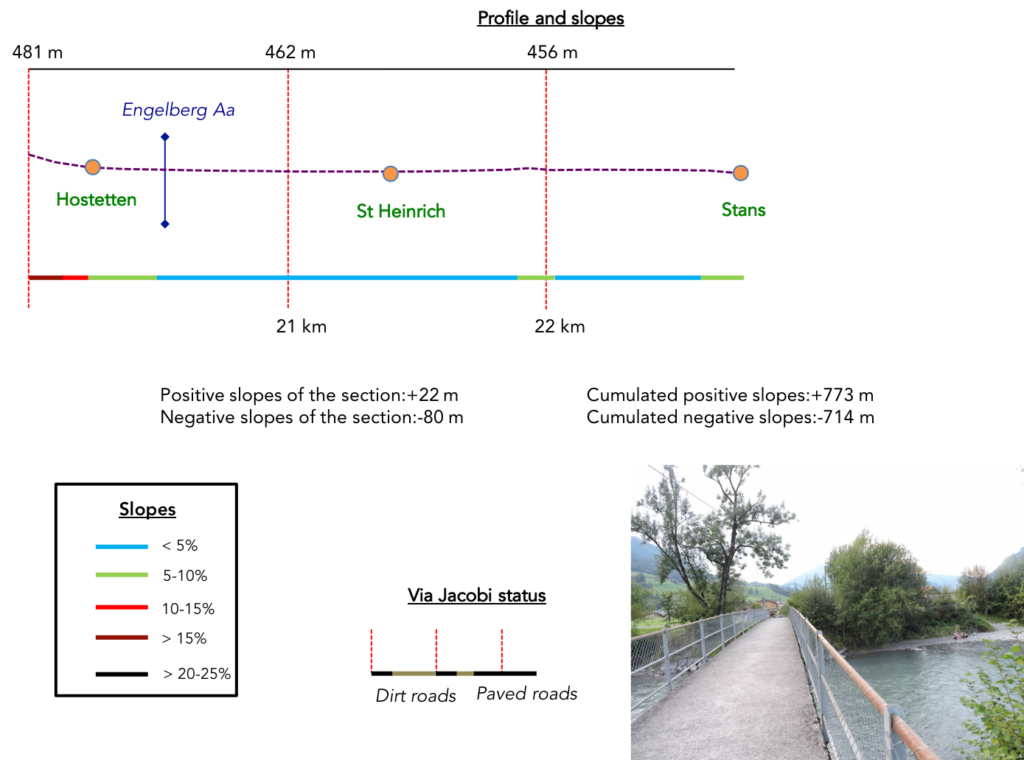 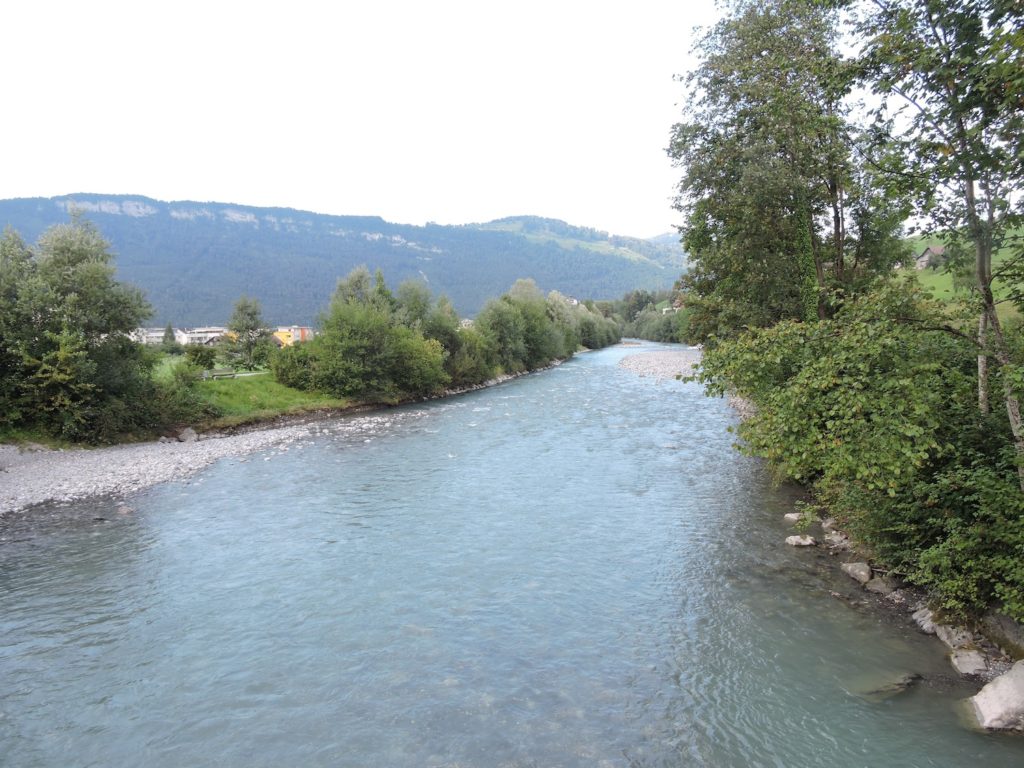 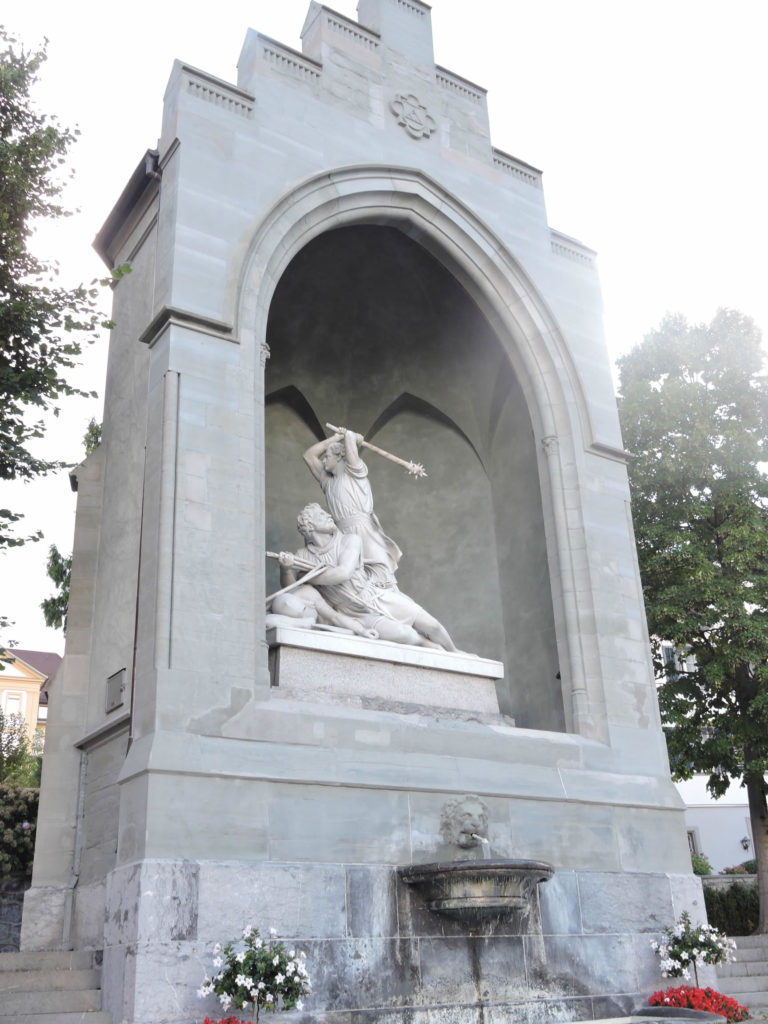 Next stage: Stage 7: From Stans to Sachseln