In the hermitage of the great St Nicolas de Flüe 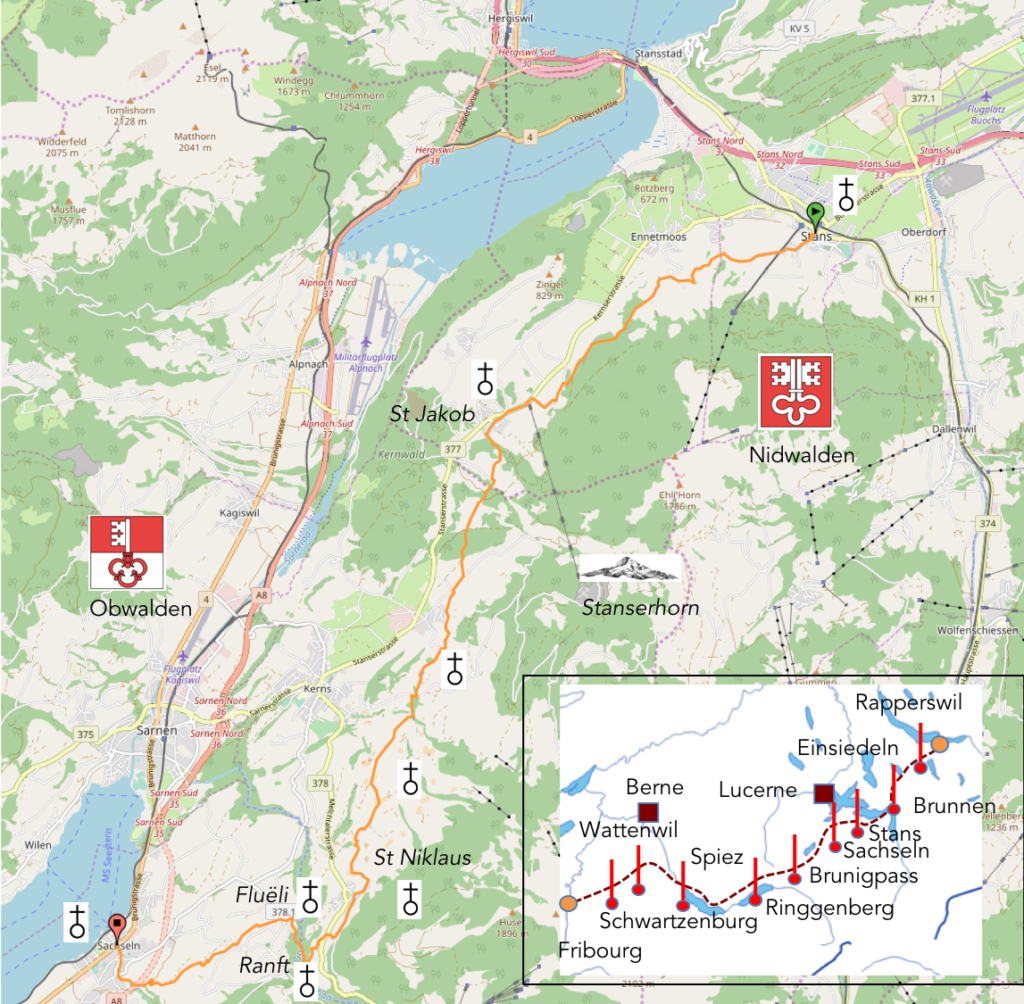 We are in September. The weather is fine, and the school children are out, somewhere towards the Stanserhorn, above Stans. Today as in the past, you are going to walk in the footsteps of Brother Nicolas, where he lived, at the Ranft, to his tomb, in Sachseln. The hermit’s reputation for wisdom and piety was so great that many rulers of ancient Europe were eager for his advice. In 1470, Pope Paul II granted an indulgence to the Sanctuary of Ranft which quickly became a place of pilgrimage.

Despite his illiteracy and his isolation, but for his consummate art of peace, Bruder Klaus remains the main unifier of Switzerland. In 1481, at the Diet of Stans, where the rural cantons feared the entry of the towns of Fribourg and Solothurn into the nascent Swiss Confederation, he wrote a document, which has since disappeared, establishing the rules of a compromise which saved the peace in Switzerland. He was beatified in 1669. After his beatification, the municipality of Sachseln built a church in his honor where he was buried. It was not until 1947 that Pope Pius XII canonized the hermit. Since then, Nicolas de Flüe has been the world patron saint of peace, as much as he is the patron saint of the Pontifical Swiss Guard in the Vatican.

When you get to the Ranft, if it’s the first time for you, you will be stunned by the fervor and the unparalleled charm of this piece of paradise.

Difficulty of the course: Slope variations (+623 meters/-611 meters) are not too unreasonable. You’ll slope down as much as you climb. This is not a very difficult stage. Let’s say it’s a fairly moderate stage, in this mountainous part of central Switzerland. But, there are also some slopes greater than 15% during the day, at the start of the stage, in the Ranft valley and at the end of the stage. The day is spent between Nidwalden and Obwalden, the two half-cantons of the canton of Unterwalden. In the first part, there are ups and downs until you reach the severe valley where the Grosse Melchaa flows, near the Ranft and Flüeli. Thereafter, the route descends gently at first, then more steeply towards Sachseln, on the edge of Sarnen Lake. 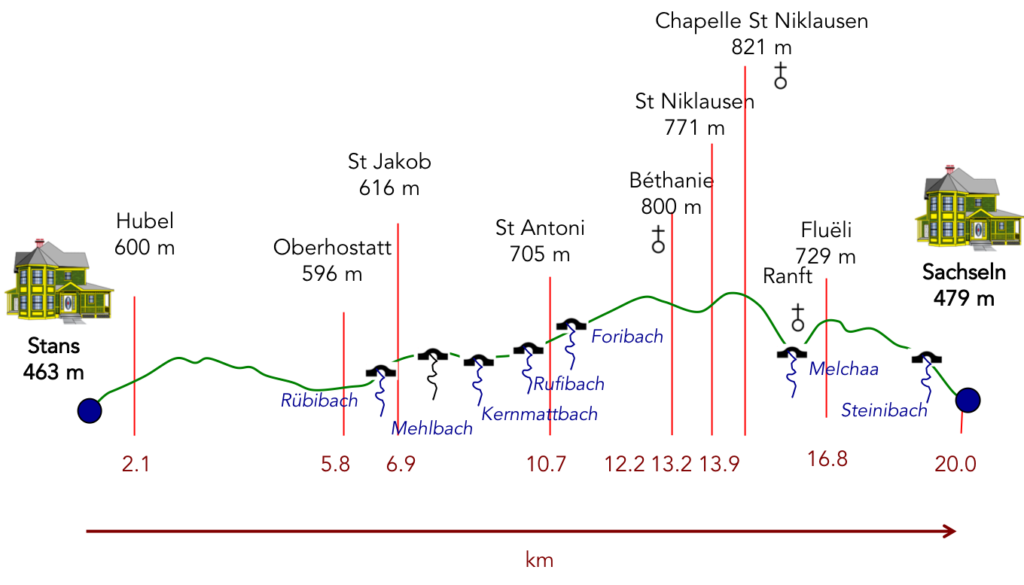 In this stage, the routes on the pathways are a little more numerous than those following the road:

Section 1: On the slopes of the Stanserhorn. 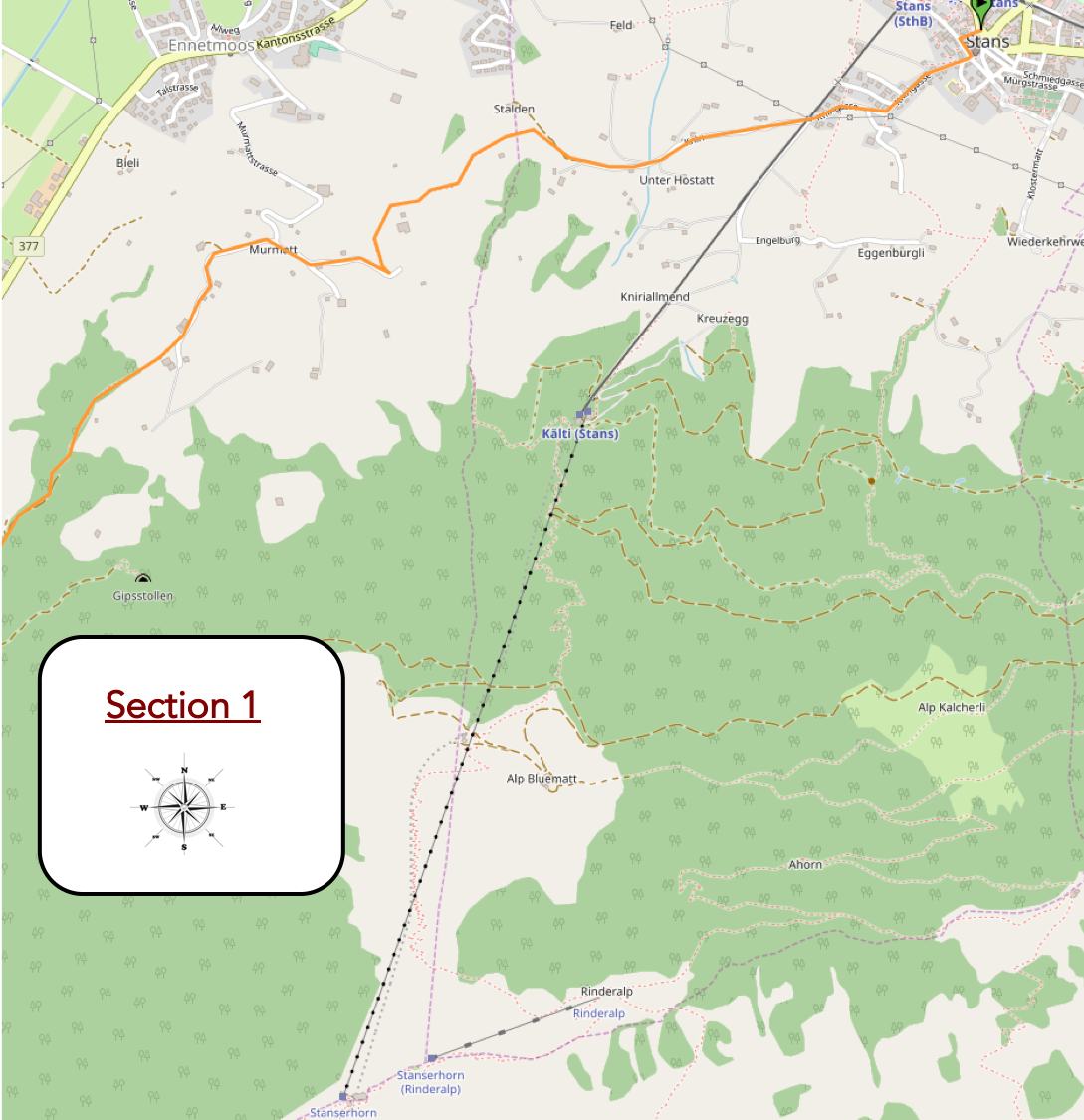 General overview of the difficulties of the route: undulating course, with very many steep sections, uphill and downhill. 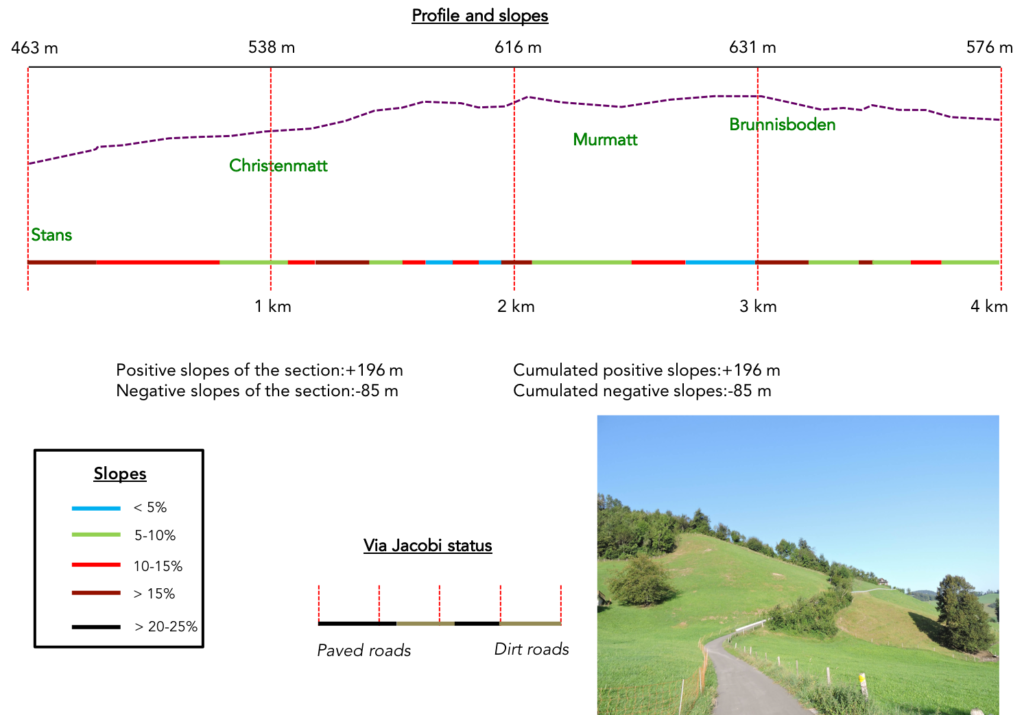 For lovers of geography, here is a map that summarizes the complex situation of this extraordinary high-altitude lake imprisoned by several cantons. 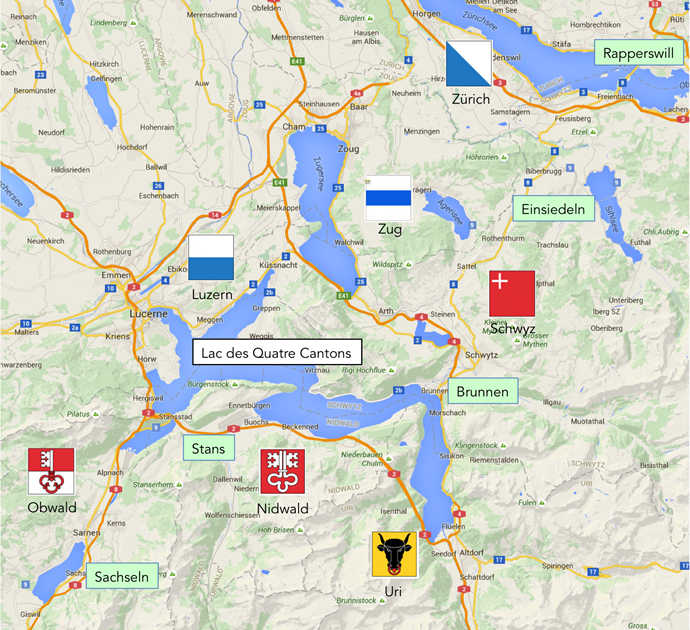 This is the Switzerland of postcards, where dozens of trains climb to the summits, especially in central Switzerland. In front of you stands the Stanserhorn mountain. The little wooden train does not go to the top of the mountain. A cable car takes over above. The view must be splendid from up there, considering the number of tourists who take the train to Stans in the morning. 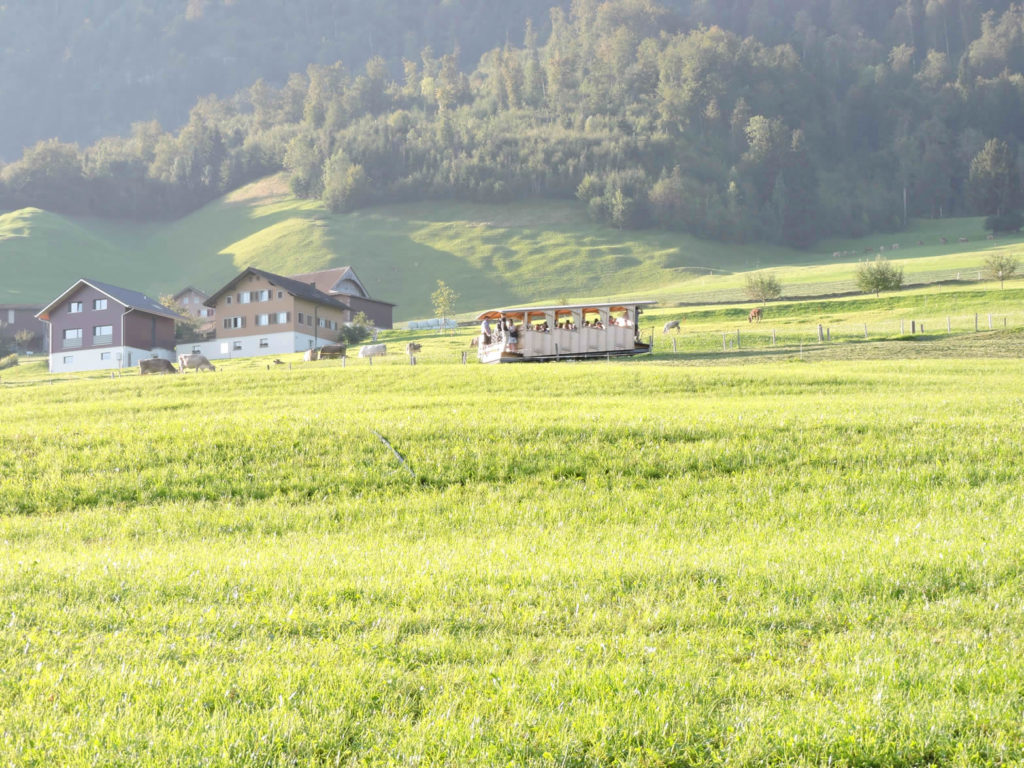 The road then gets to a place called Christenmatt. Here the Ranft ia announced at nearly 5 hours of walking. 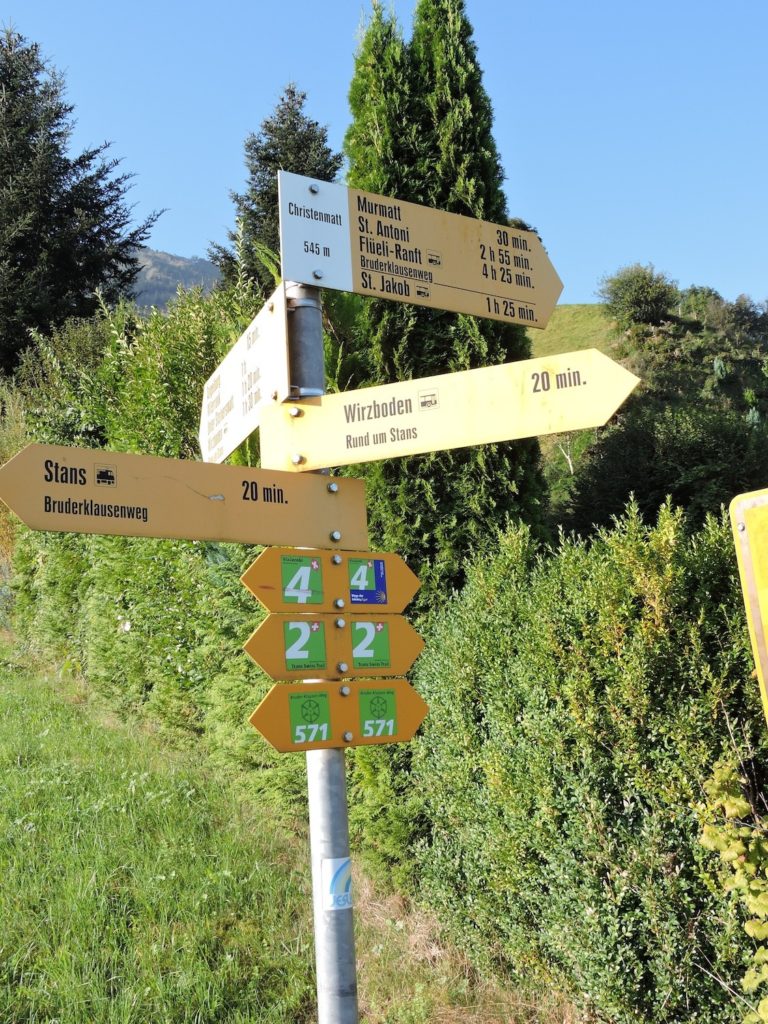 On your right, you see the Pilatus, the mountain dominating Lucerne on one side, the Rigi being located on the other side of the lake. Our track does not pass there, but a cogwheel train, the steepest on the planet, climbs the Pilatus with a gradient of up to 50%. 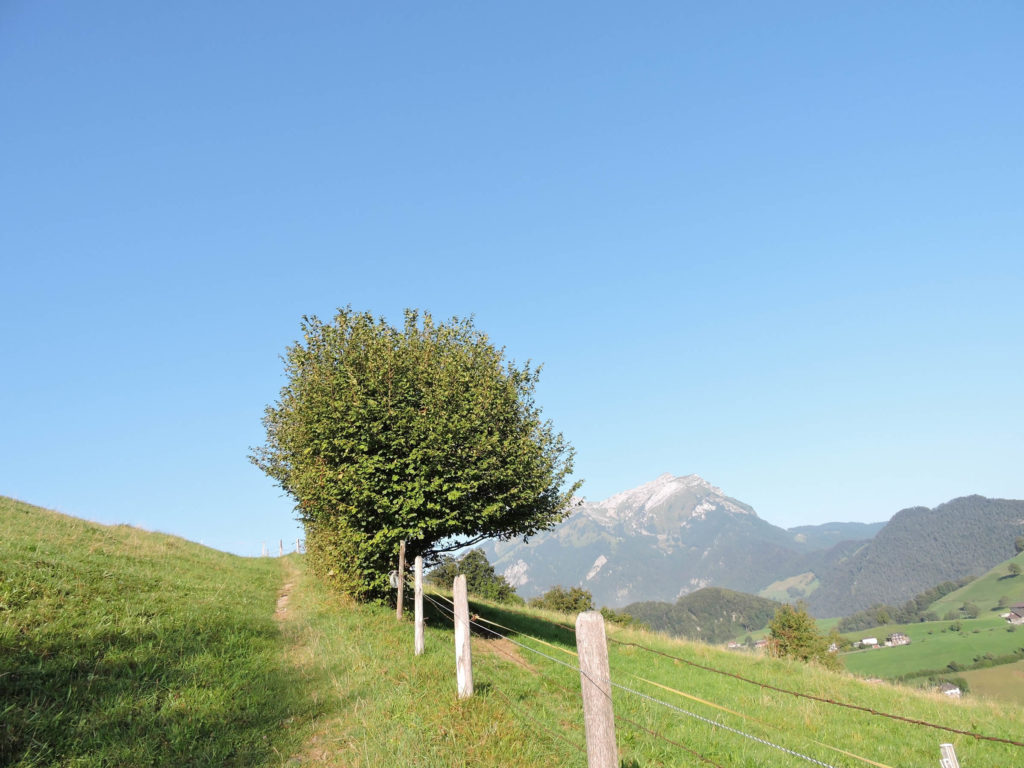 Higher up, a pathway runs through the meadows towards the undergrowth. Here, the landscape will radically change. 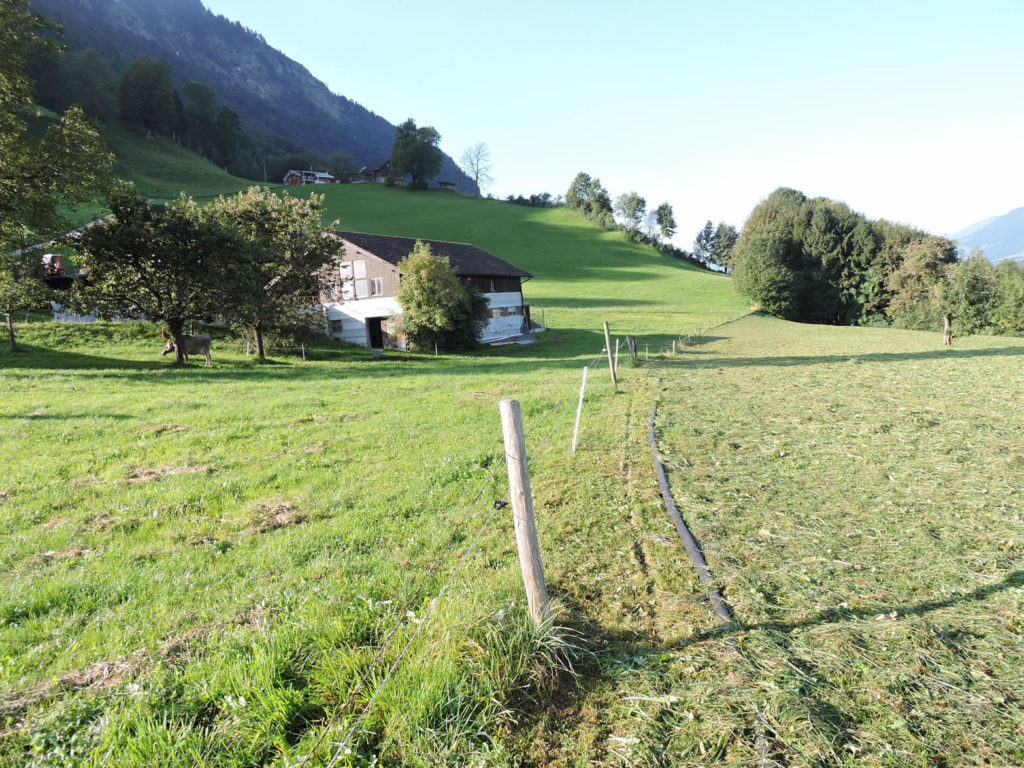 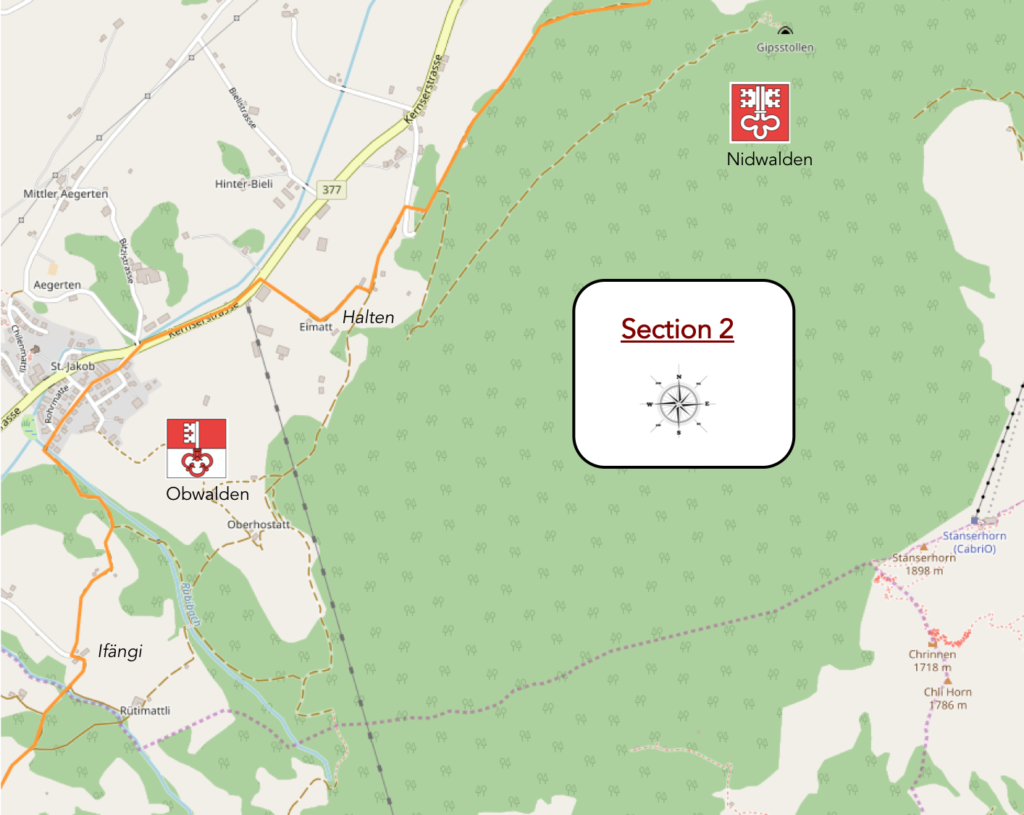 General overview of the difficulties of the route: undulating course, not very demanding, with descent in the plain, then climb on the other side on the hills. 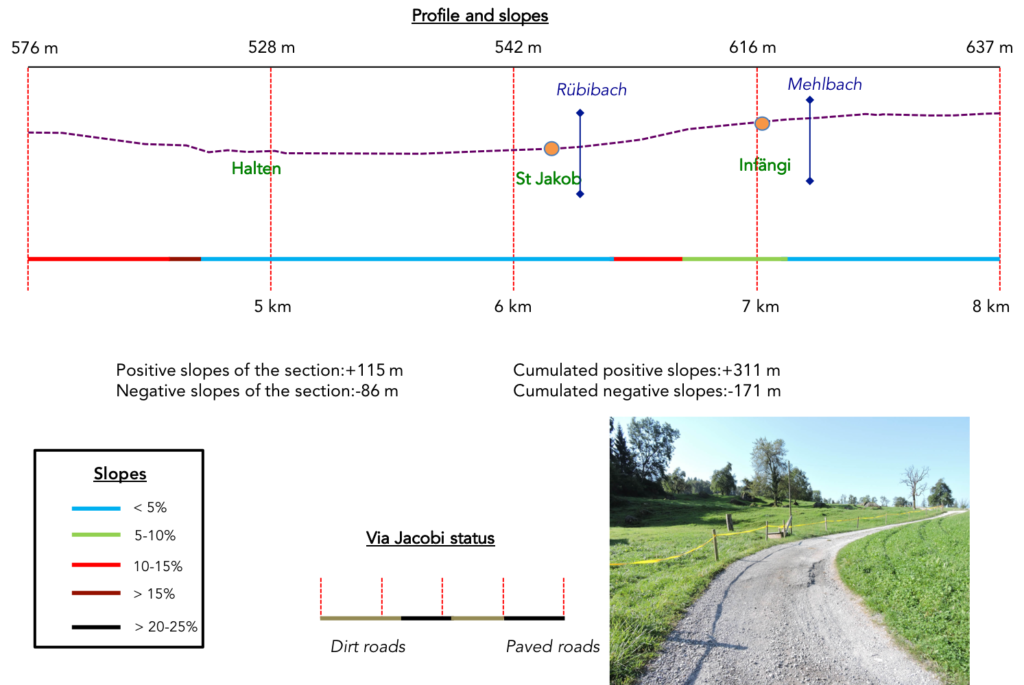 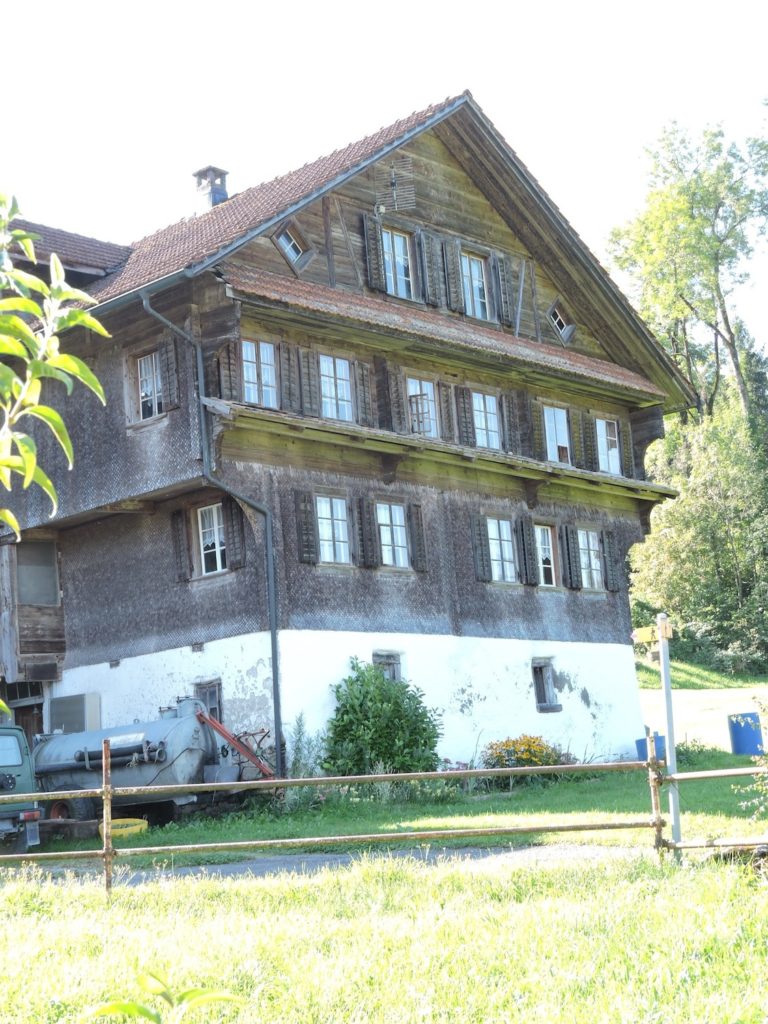 Section 3: Over hill and dale in the Oberwalden countryside. 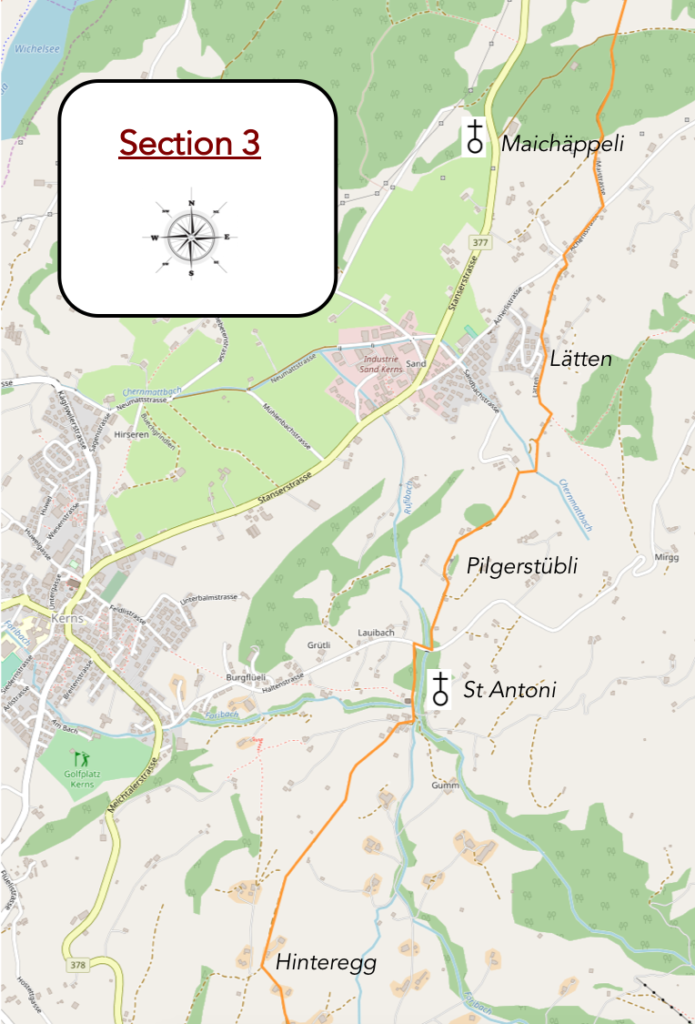 General overview of the difficulties of the route: almost constant uphill, but reasonable slopes. 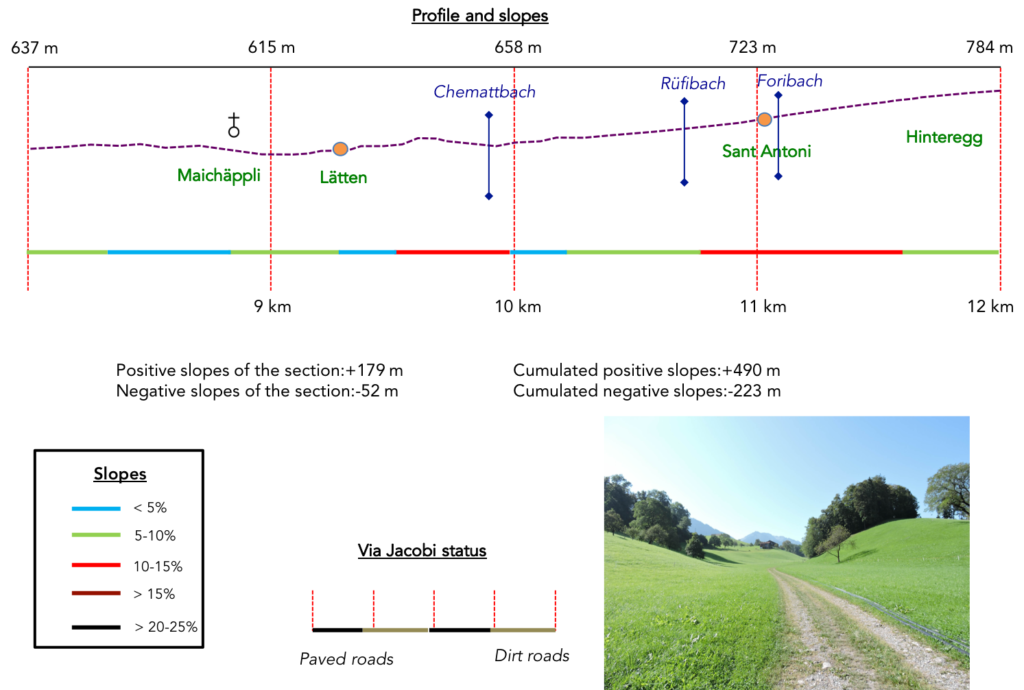 High above your heads sits the Stanserhorn mountain. 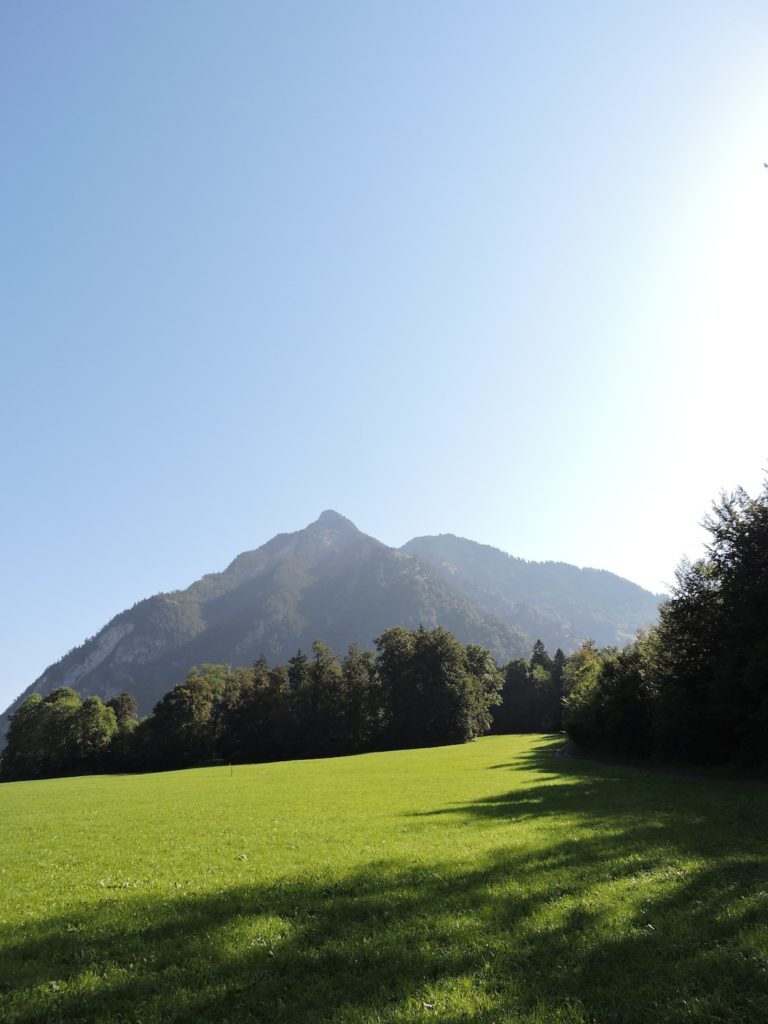 Here, farmers pay tribute to the Braunvieh, which deserves it. 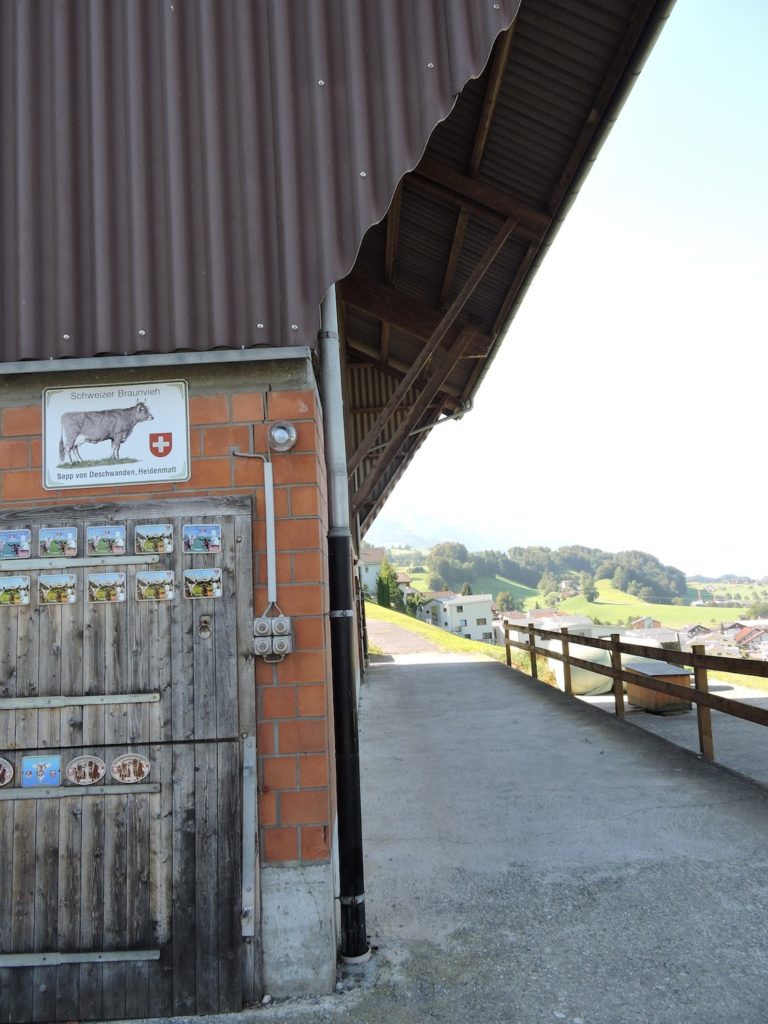 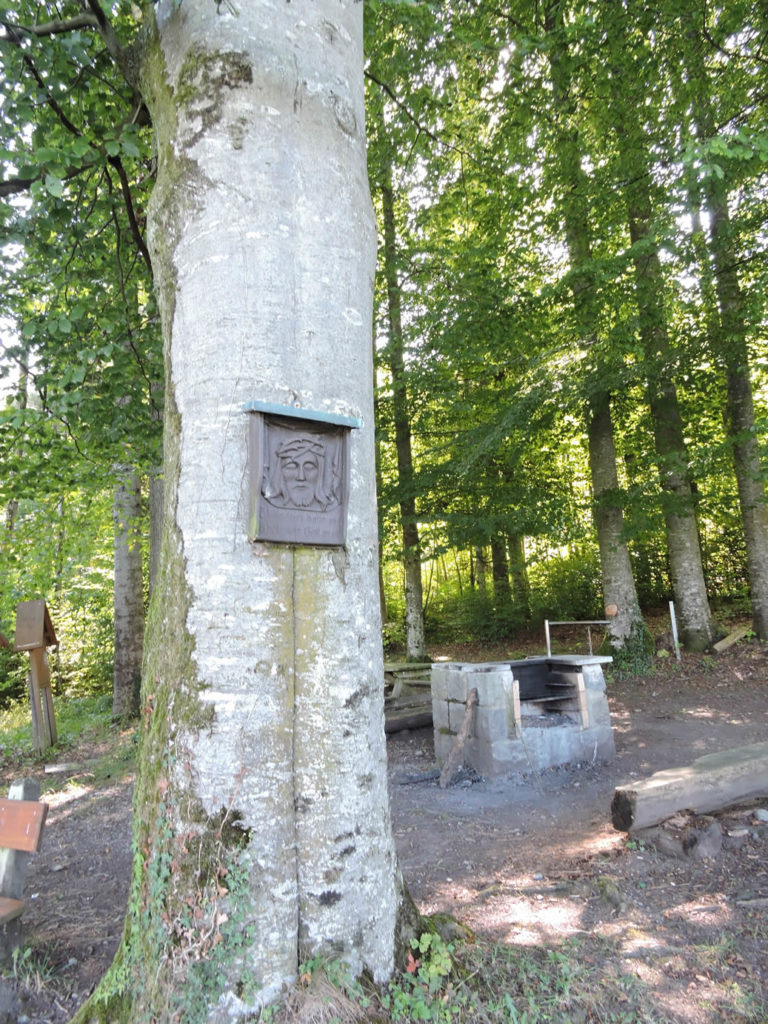 Section 4: On the way to the hermitage of the good Saint Nicolas of Flüe. 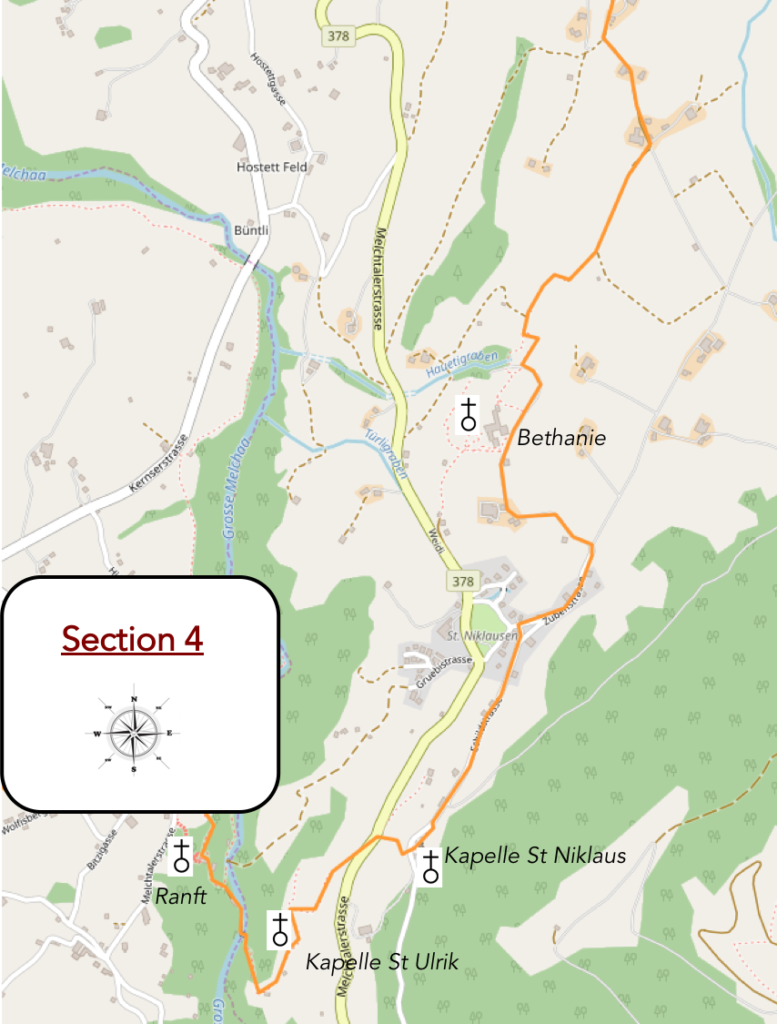 General overview of the difficulties of the route: leg-breaking course, especially in the Ranft dale, with very steep slopes. 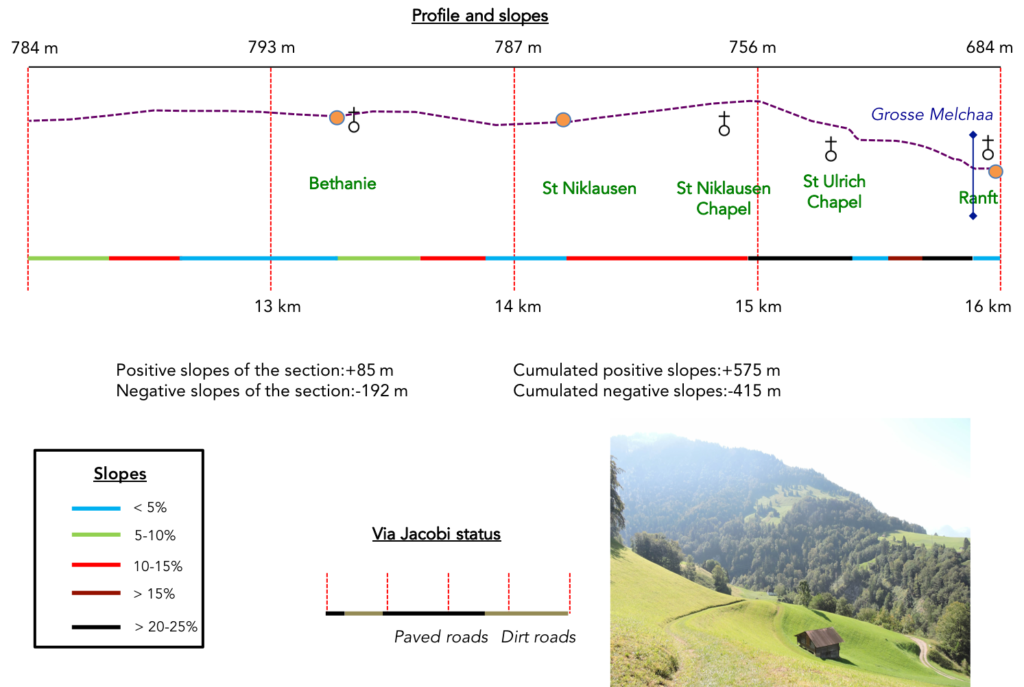 When you turn around, you can still see the Stanserhorn above Stans. 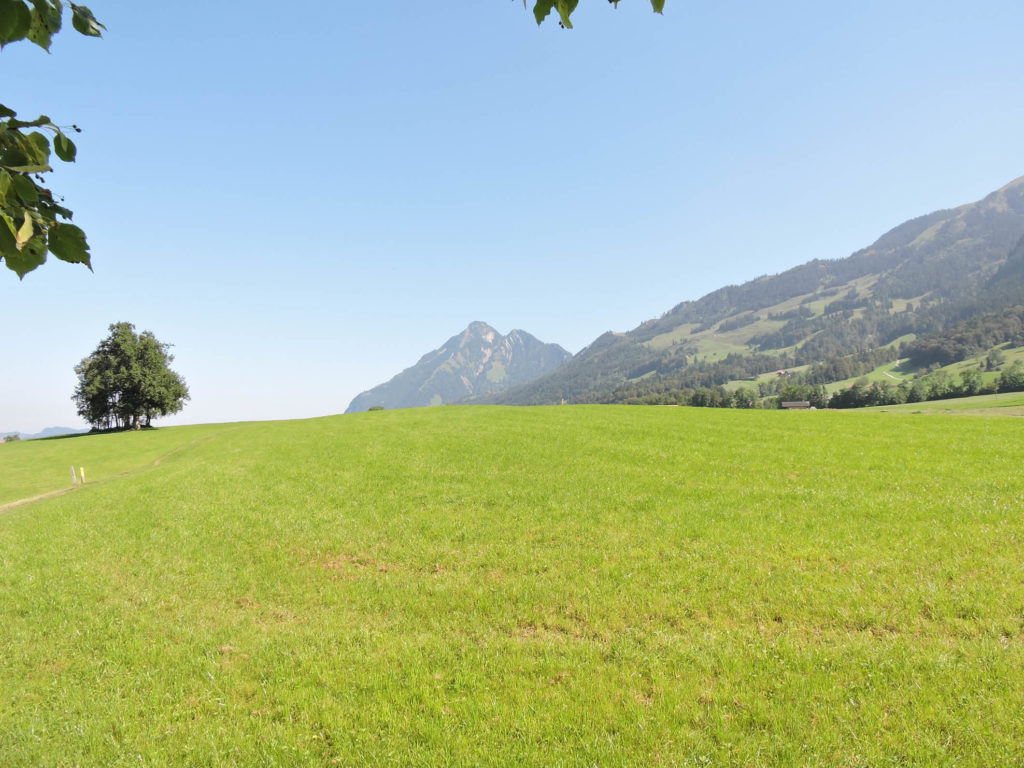 As we said, the directions here are poorly marked and confusing. We will help you. You must arrive below near a small cross by the side of the road. To do this, you have to slope down the small steep pathway in the undergrowth or in the meadows. 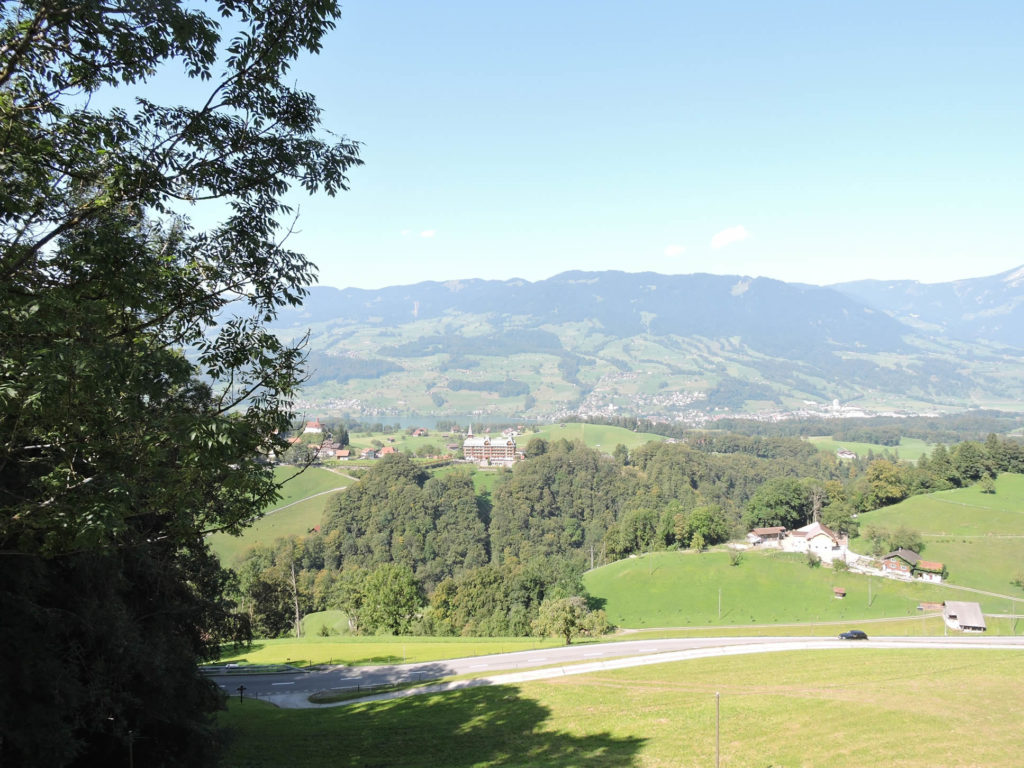 Overview of the difficulties of the route: demanding route at the bottom of the Ranft dale, then a break in Flüeli, before the descent to Sachseln, with sometimes also steep slopes, especially towards the end. 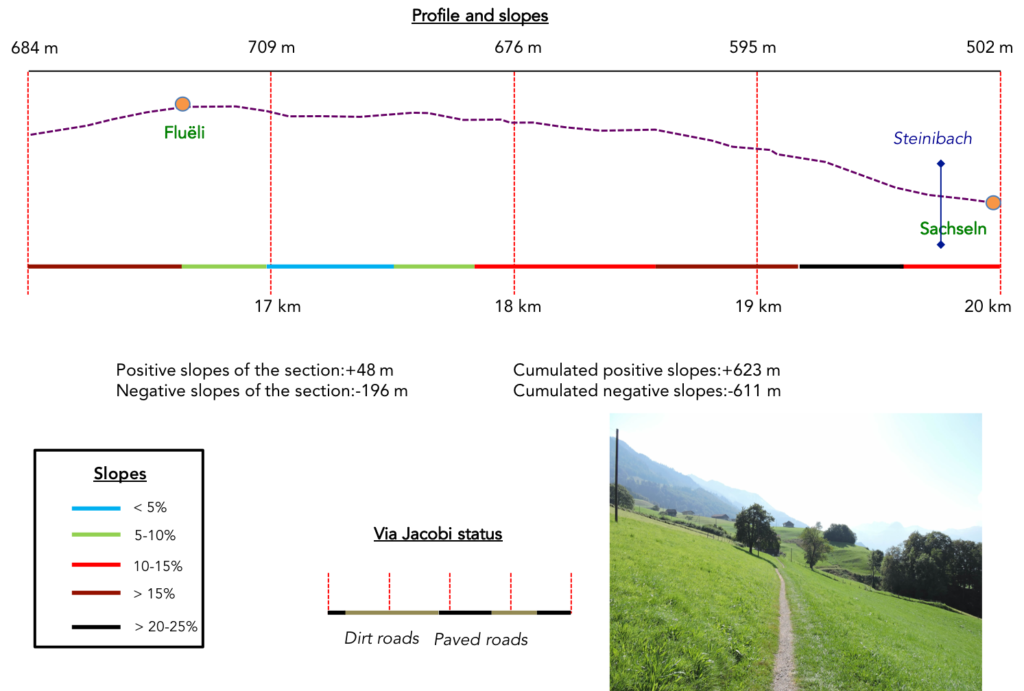 The hermitage itself is a stone’s throw away, above a chalet where souvenirs are sold. 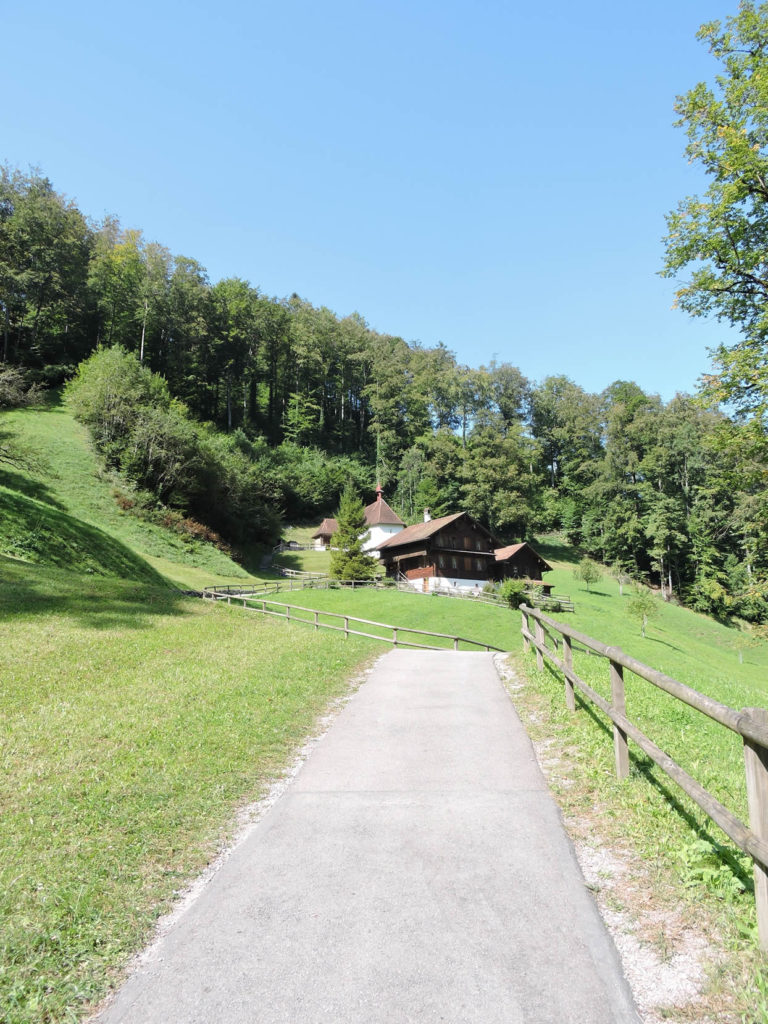 Moreover, for visitors who arrive here by car, walking time is offered. Downhill, not uphill! For you who have been there, you can still see St Nicholas Chapel in the woods at the top of the hill. 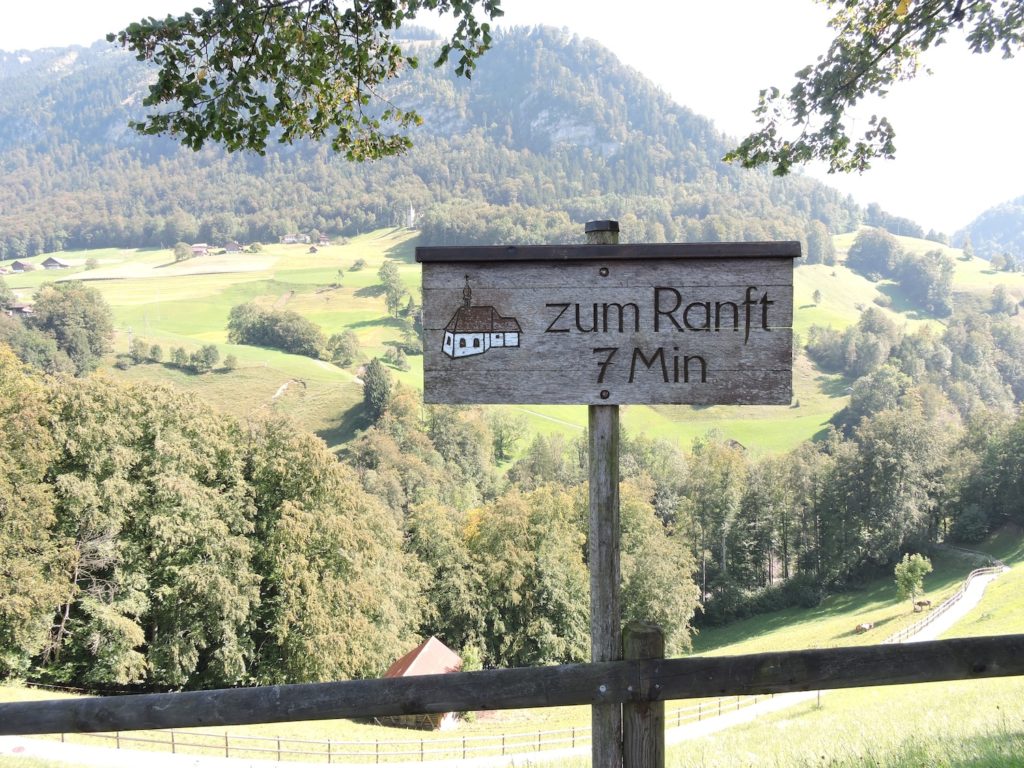 It crosses a house which could well be the twin sister of that of Nicolas. The house is just incredible in beauty and serenity under its burnt wood. 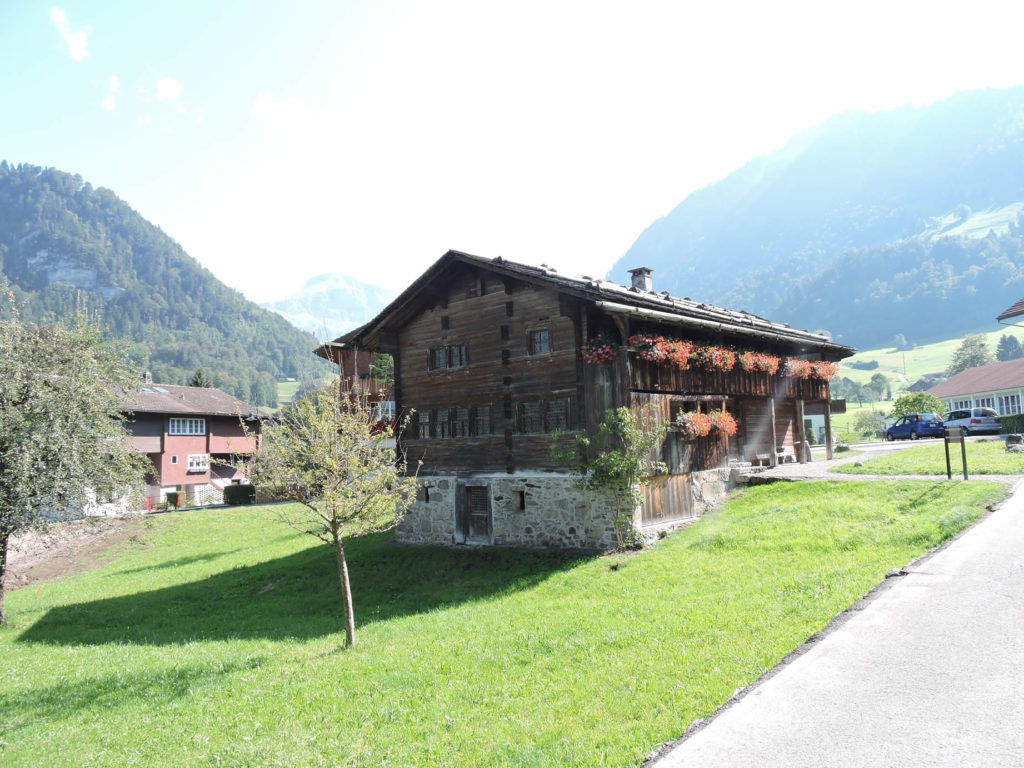 There are even stairs in the steepest places. 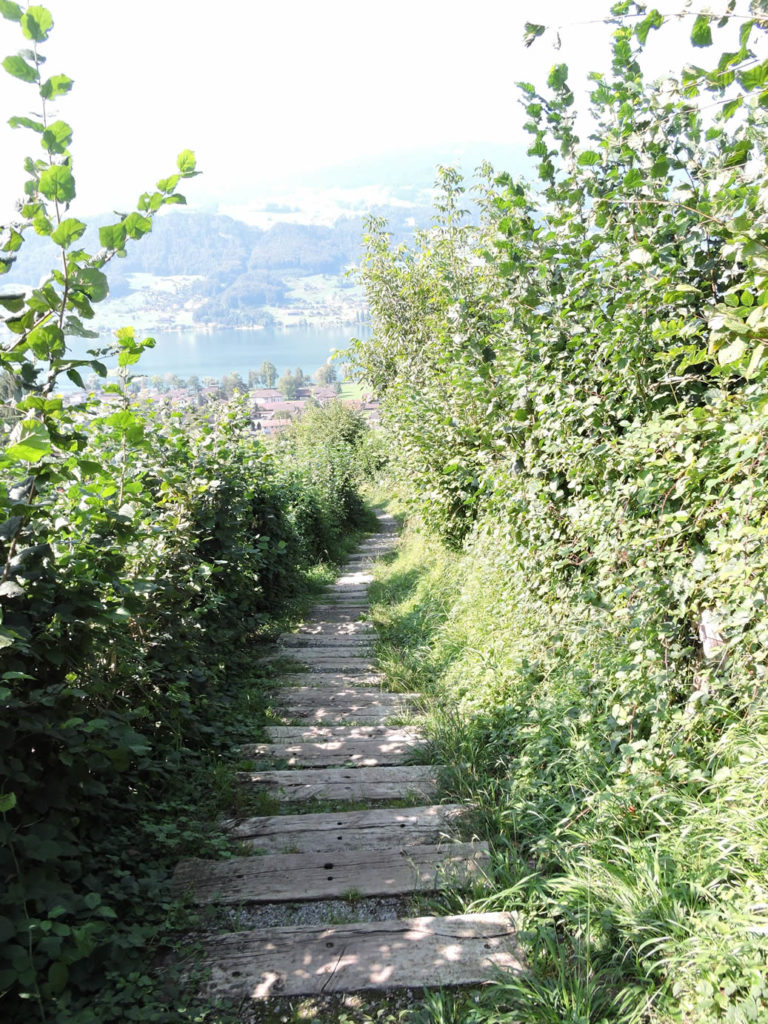 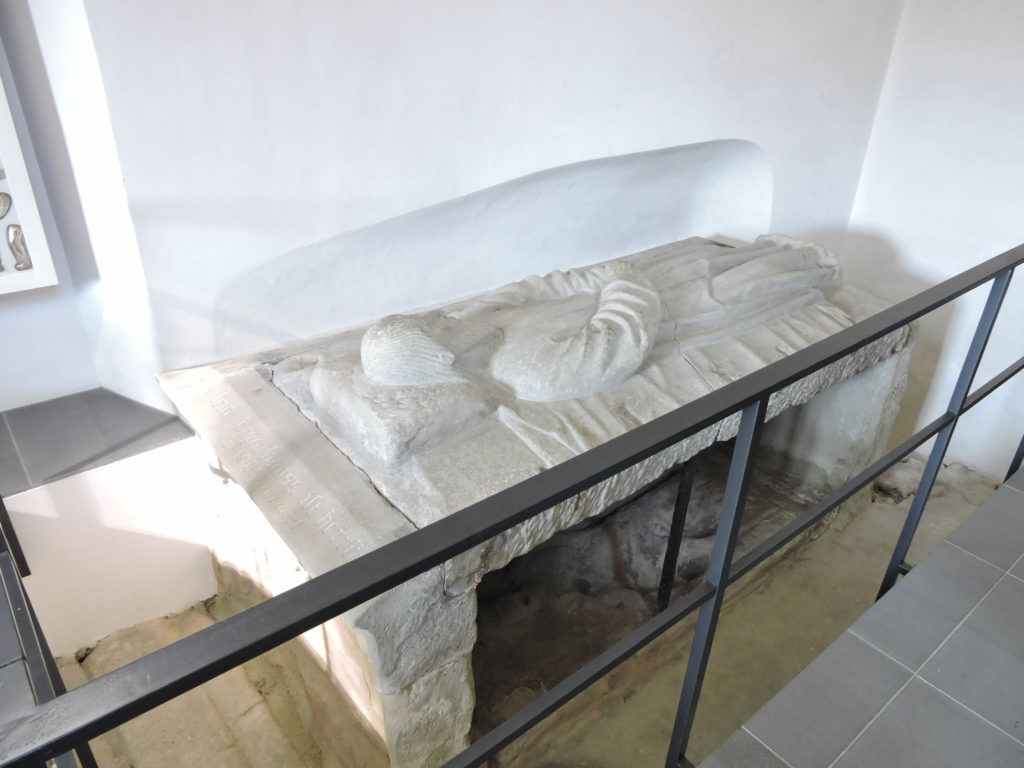 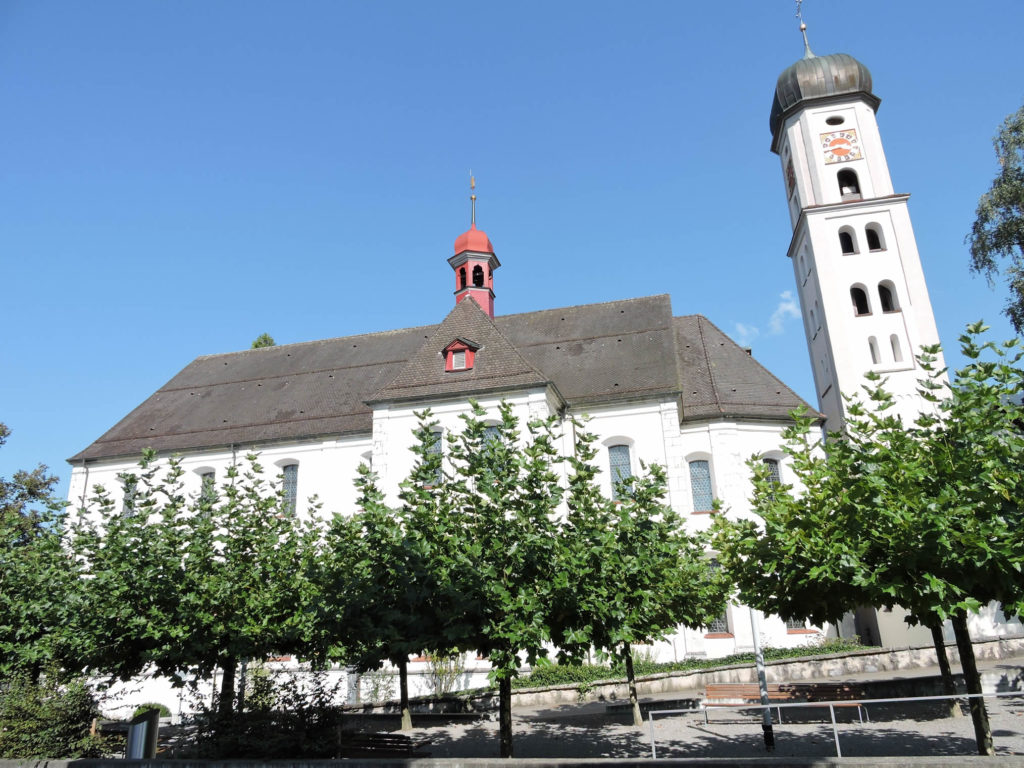 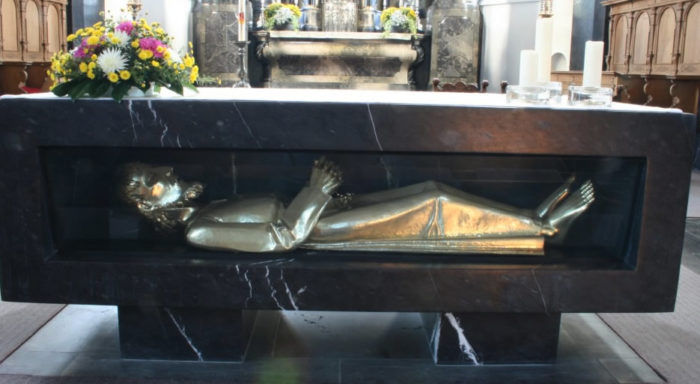 Next stage: Stage 8: From Sachseln to Brünigpass