Along Brienz and Thun Lakes 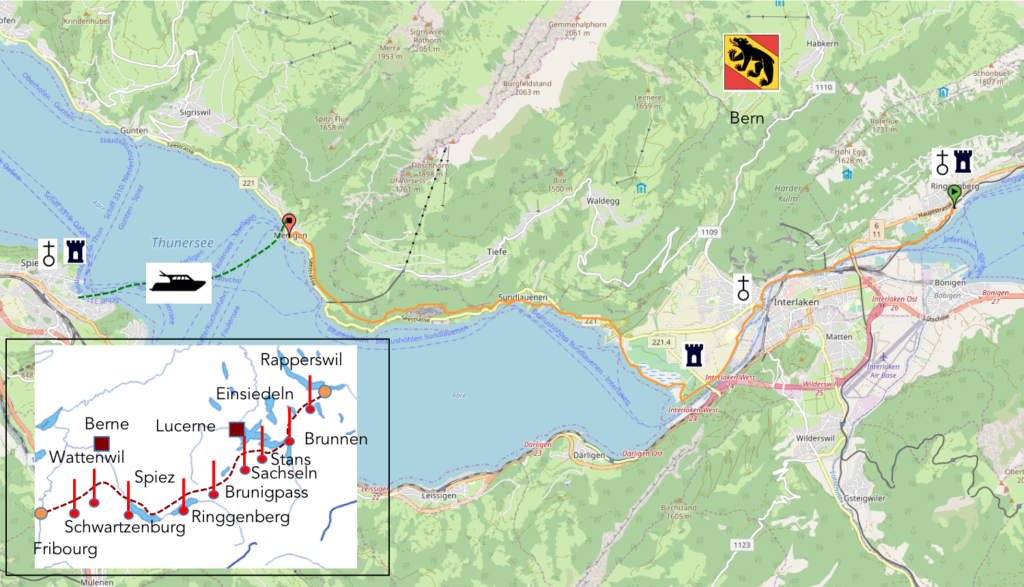 Interlaken, as the name says, is the city between two lakes. It is a magnificent, enchanting site, no one will be able to deny it. The lakes of Brienz and Thun which join on the outskirts of the city, the wonderful 4,000 snow-covered mountains all year round overlooking the lakes, you quickly understand why Interlaken attracts so many tourists, especially Asians and Arabs.

But, so it is with many beautiful places, tourism here is no more than a big business. The bulk of the business is concentrated on the Höheweg, the main artery of the city, with its multitude of luxury boutiques, watchmakers and **** hotels. Some restaurants display menus in more than 10 languages, including three different Asian ones. Because here, Japanese, Chinese, and other Asians rub shoulders without problem with the rich from Qatar, Kuwait, Oman, Saudi Arabia or the Arab Emirates. Hotels provide prayer rugs, with rooms sometimes equipped with compasses, to easily find the direction of Mecca. Cruises on Lake Brienz offer a halal buffet. There are over 5,000 beds available in Interlaken. Today, the Tourist Office registers more than 100,000 overnight stays from Arab customers. One sometimes has the feeling, walking around without the city, of being in Abu Dhabi. Here, the free trains circulate constantly between the two stations located at the two ends of the city, a train also connected to Lucerne, the other tourist destination par excellence in the country, a train that, many times, the opportunity to cross in the previous steps.

However, the pilgrim can avoid all this mess. The route runs along the AareRiver and only enters the city marginally. It only runs through Unterseeen, the less touristy part of the city, to reach the shore of Thun Lake, run later through the famous caves of Beatenberg, before plunging back to Meiringen, on the edge of the lake. There, the pilgrim has no other choice, if he wants to go to Santiago di Compostela, to take the boat to Spiez, on the other side of the lake.

Difficulty of the course: Slope variations today (+469 meters/-463 meters) are very reasonable. It is a course without any difficulty, almost flattening until Neuhaus. Thereafter, ups and downs are a little more demanding, especially near the caves of Beatenberg, where the slope is tough.

In this stage, the routes on the pathways are clearly more numerous than those following the paved road:

Section 1: A few undulations before reaching the river and the city. 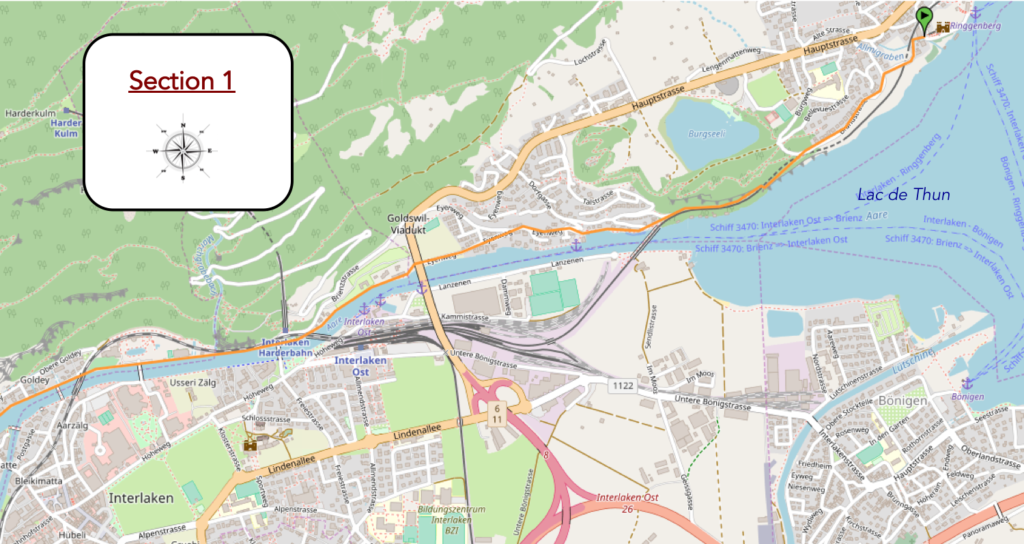 General overview of the difficulties of the course: course without problem.

Further on, the pathway passes over the railway track, which plays with the tunnels a little above the lake. 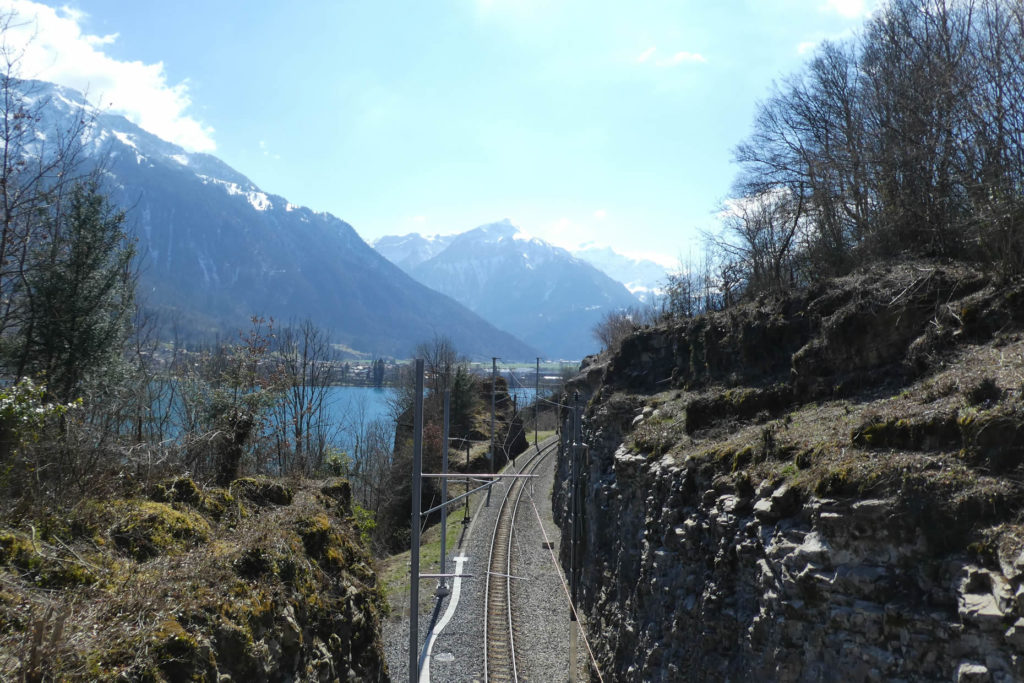 This is where the large cruise ships on Lake Brienz are stowed, because downstream the Aare River is no longer navigable. 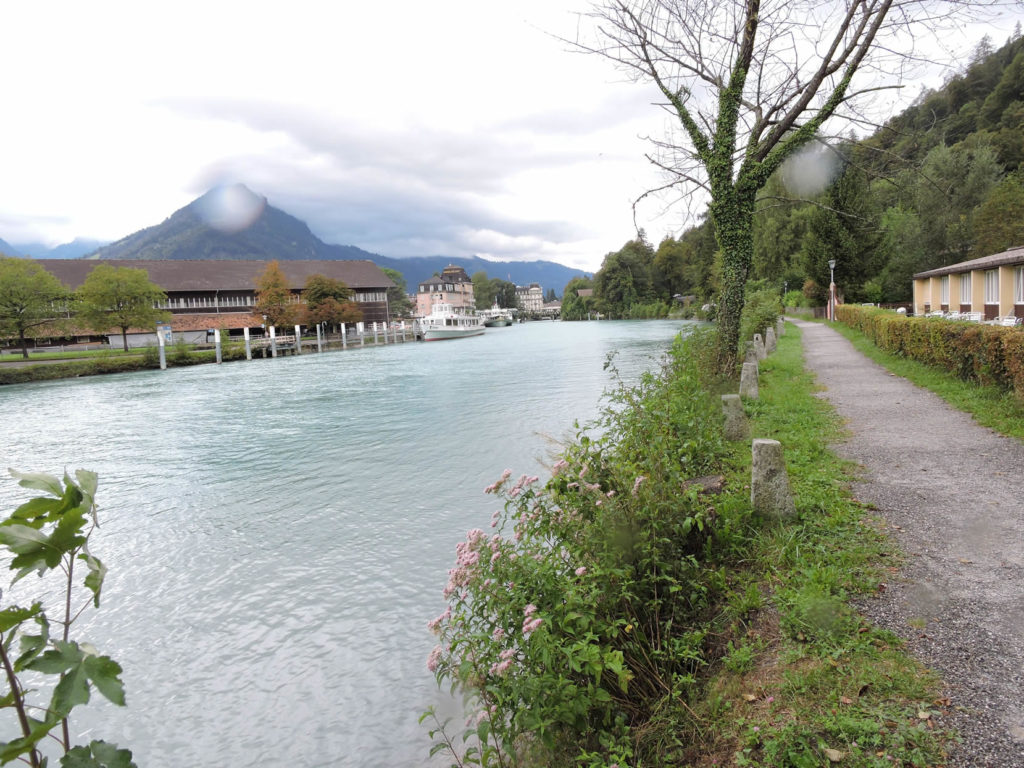 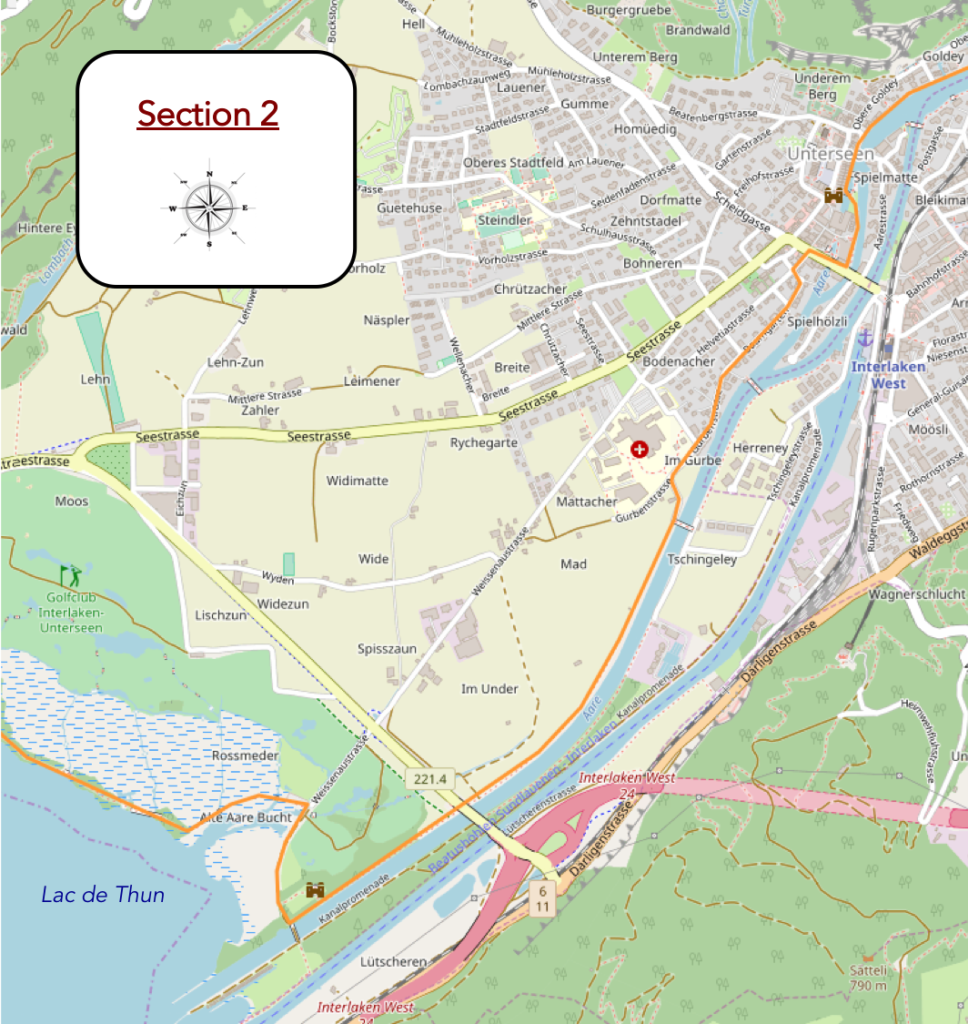 General overview of the difficulties of the route: course without problem.

In Interlaken, the Aare River has several locks. One of them is located here, at Goldey Bridge. If you cross the bridge over Spielmatte, you will arrive at Interlaken-West station, the terminus of the Lucerne-Interlaken tourist line. Another line goes further to Spiez, then Thun. 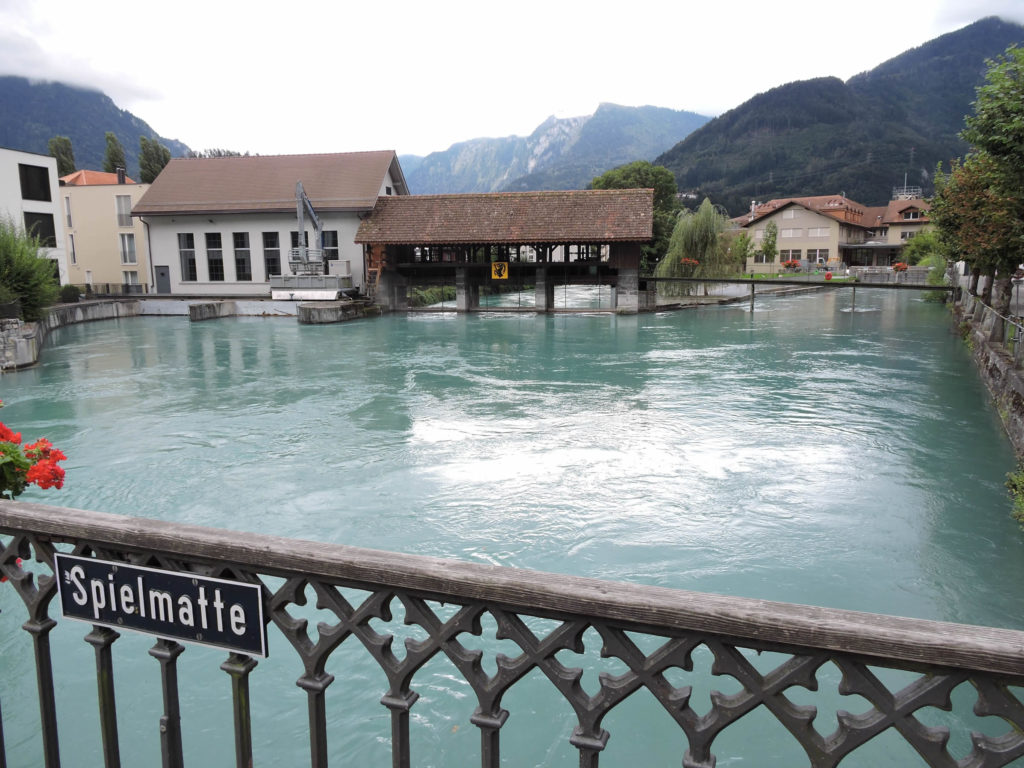 Section 3: Strolling by the lake before the effort. 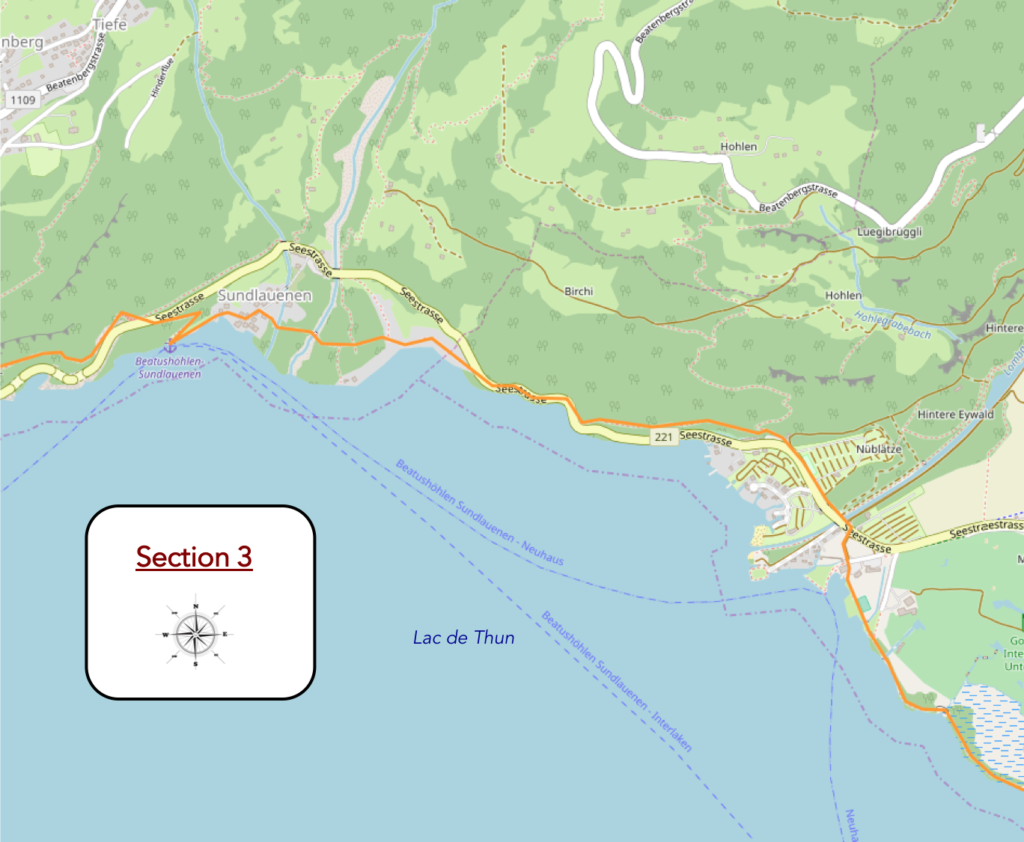 General overview of the difficulties of the route: walk, then some new canyons, and then tough climb to Beatenberg caves.

On leaving the park, you can see Spiez in front of you at the other end of the lake and the mountain of Beatenberg, on your right, where the route runs. 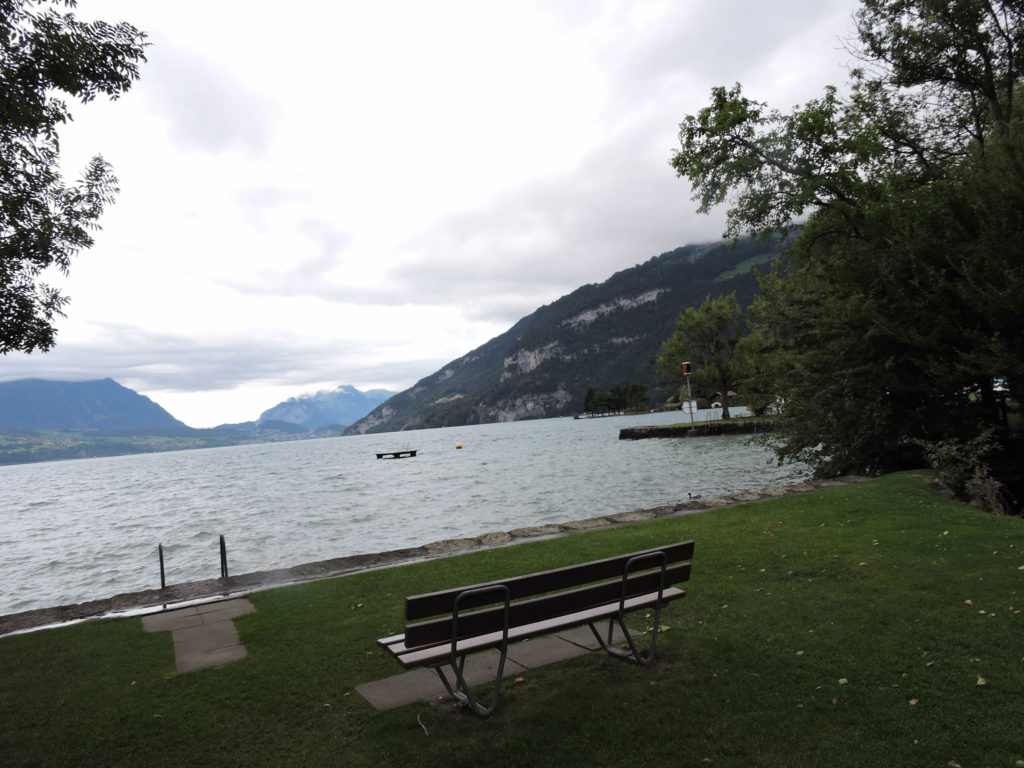 Shortly after, the pathway passes to the other end of Sundlauenen. Here you can try your hand at checking the weather the way it was used in prehistoric times. 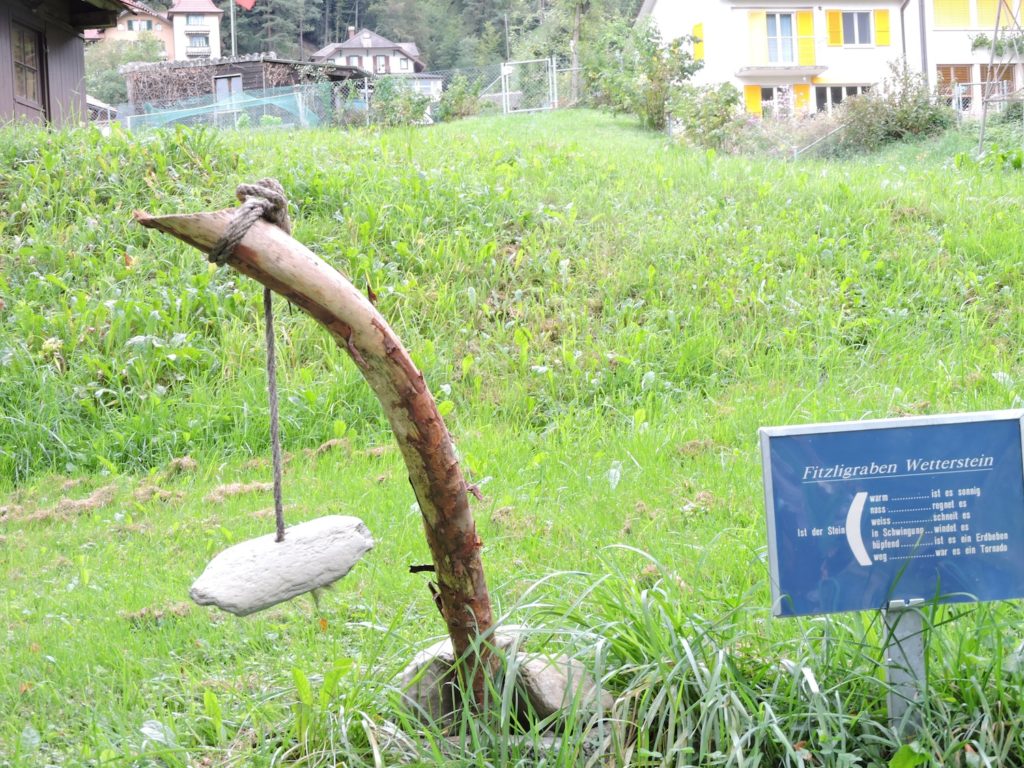 The Camino de Santiago has been accommodating with the pilgrim today, being almost flat so far. But here is a sign announcing the caves of Beatenberg. So here the life of the pilgrim will change. The slopes will become tough, very demanmding. But not long… 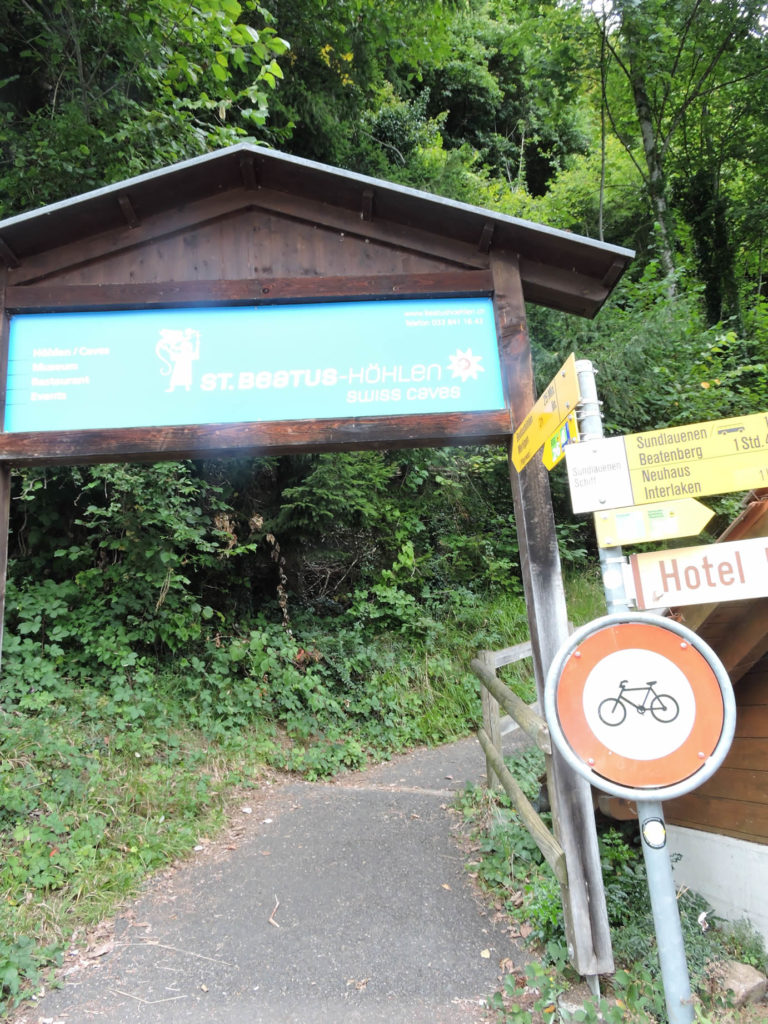 Section 4: On the flanks of Thun Lake.

General overview of the difficulties of the route: leg-breaking track, up and down, with often marked slopes.

Then, the slope softens a little and a paved pathway leads to the caves. 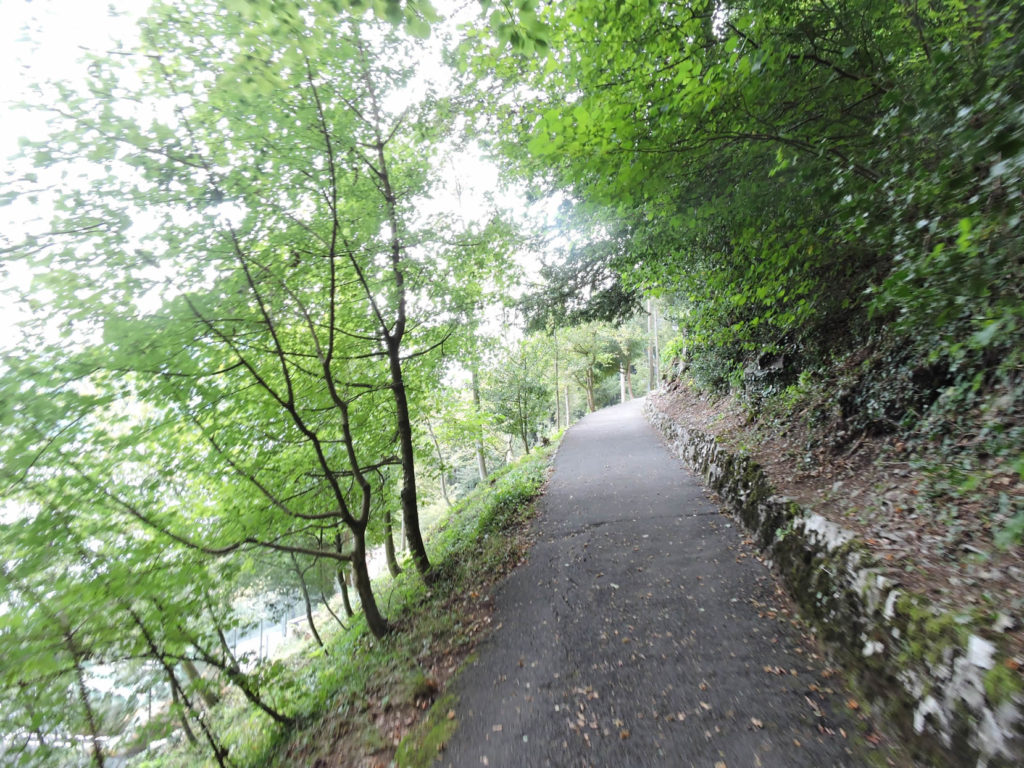 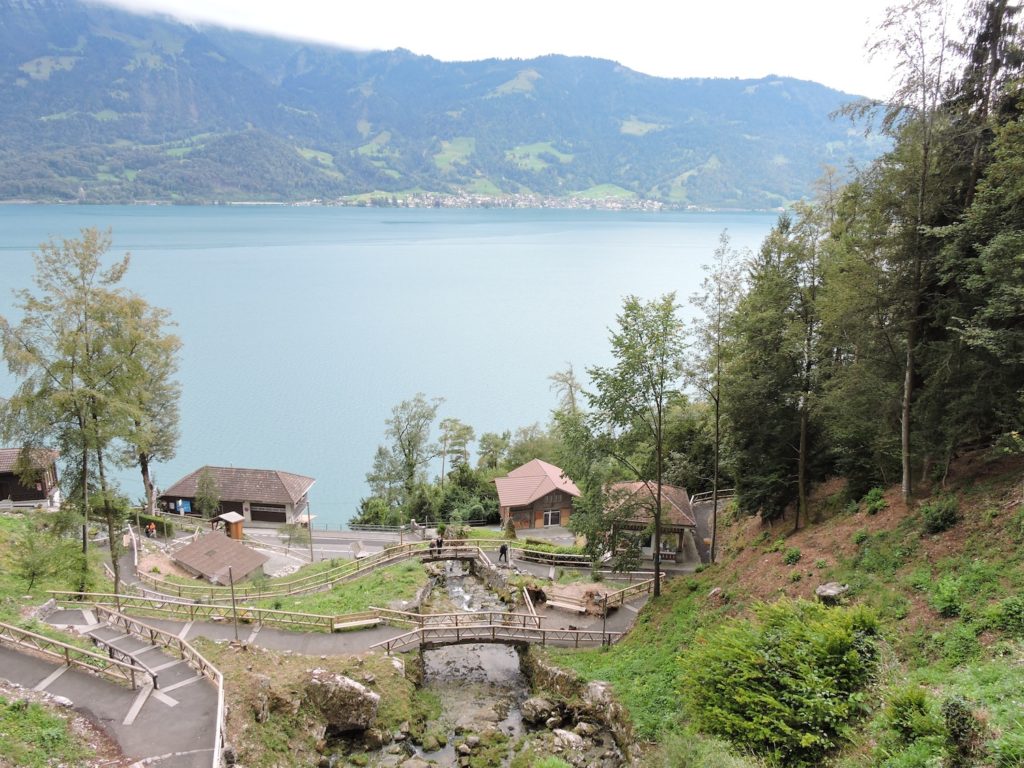 Shortly after, the pathway reaches the place called Nastel. Here you are half an hour’s walk to Merlingen. Everywhere, directions are given to climb Beatenberg, where there is a high station overlooking the lake. 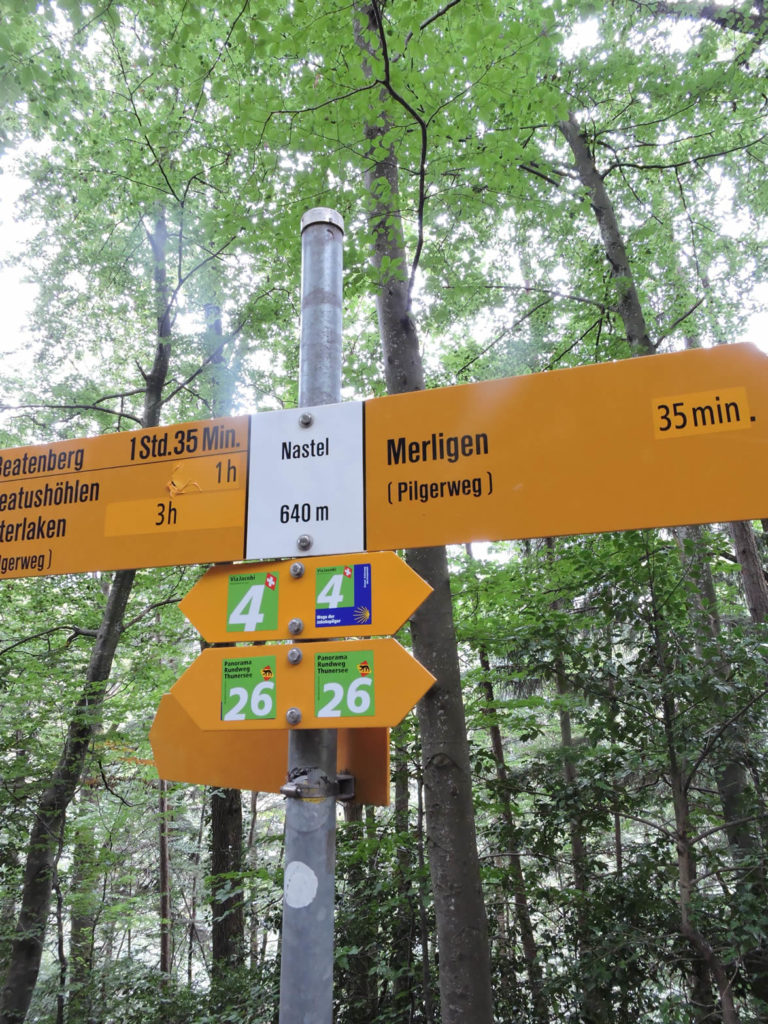 The pathway then arrives at the place called Fischbalme, where you can still climb the Beatenberg mountain or descend to the edge of the lake at Beatenbucht. 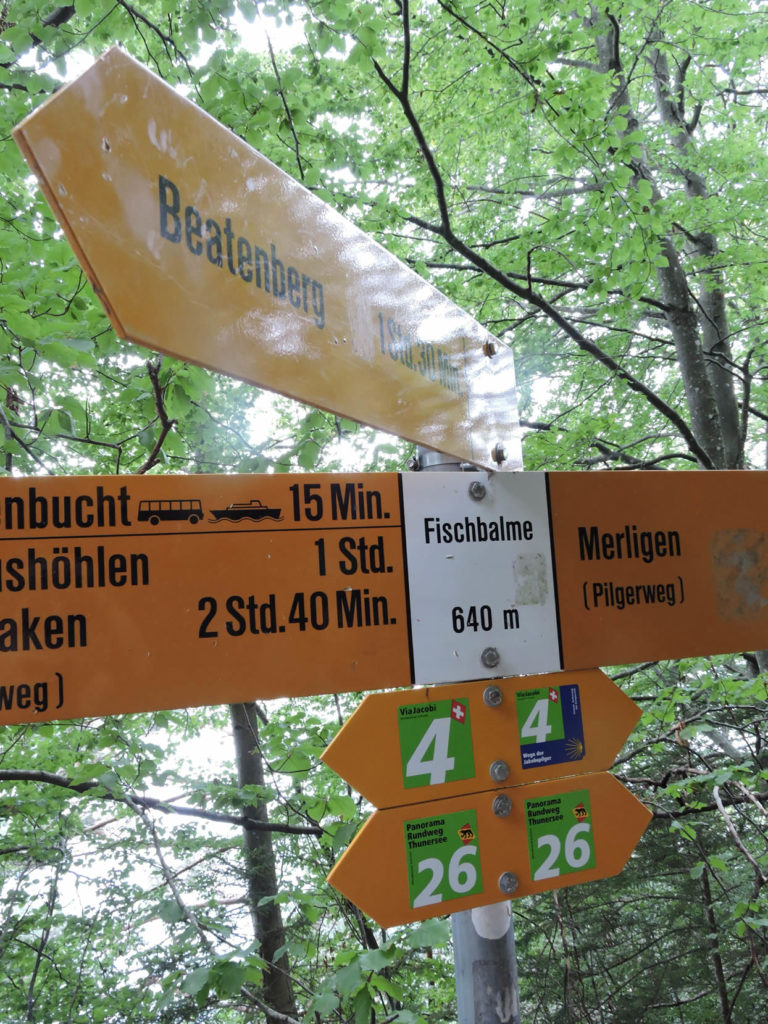 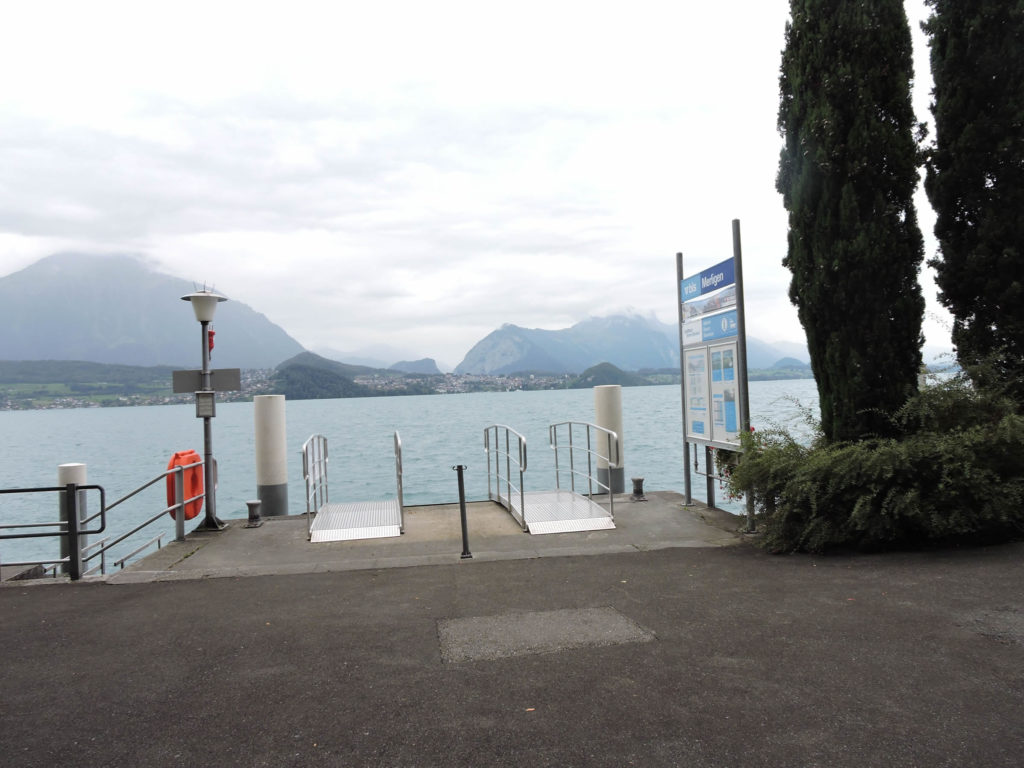 Next stage: Stage 11: From Spiez to Wattenwil