Almost at the end of the canton of Bern 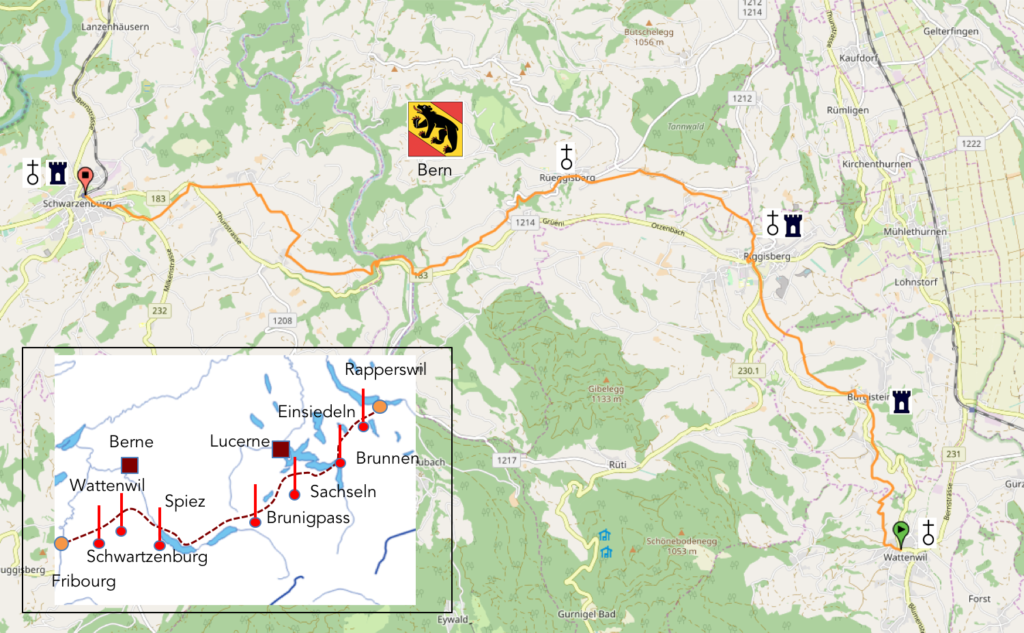 Today, the route will first pass through the last villages of the district of Thun before crossing most of the countryside and the small villages of the district of Schwarzenburg, bordered to the east by the Scharzwasser River and to the west by the Sengine River, the Sense in German. This region has a particular history, having been sold in equal parts, in the XVth century, by the Dukes of Savoy to the two cantons of Fribourg and Bern. It was then that began the hard period of the double reign which was to last until 1798. This period had an extremely detrimental influence on the development of this small isolated state, often resulting in great poverty, because neither Bern nor Fribourg were disposed to invest a lot in the country. The Swiss constitution of 1798 attributed to the city of Bern alone the total annexation of the region of Schwarzenburg. From now on, Schwarzenburg is a Bernese district.

Having done the route of the Way of Compostela several times, we favored the routes made in clear weather. But, we can also have another, more realistic point of view. The rain also has its charm and the landscapes change. “Morning rain does not stop the pilgrim” is a well-known saying. When we did this stage, the rain was heavy, almost no longer seeing the track. It is therefore difficult to present images where the objective is no more than a large drop of water. So, we redid some parts of the route on a less cloudy day. You will therefore have the feeling of living in a strange universe, traversing the same landscape in very different climates, but that does not change the message, which is to comment and show the route. Let’s sing in the rain!

Difficulty of the course: Slope variations (+588 meters/-392 meters) are quite significant for a relatively short stage. But the most demanding slopes are spread throughout the day. First there is the initial climb above Wattenwil, the most tough of them. Less demanding is the long climb from Riggisberg to Rüeggisberg. And then, the route twists a lot uphill in the undergrowth after crossing the Schwarzwasser River, and just before arriving at the end of the stage. The descents do not represent any particular difficulty. 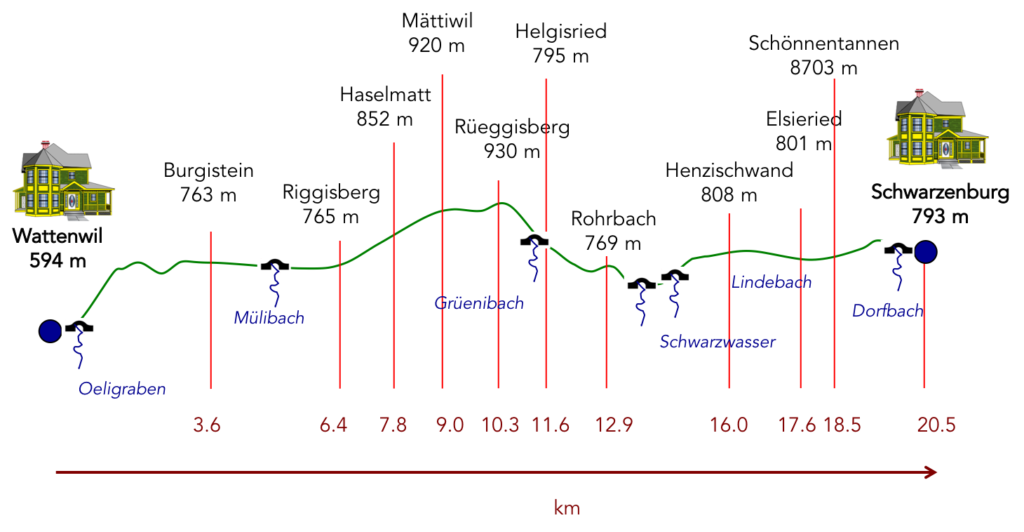 The roads, as often, still dominate the pathways:

Section 1: On the heights of Wattenwil. 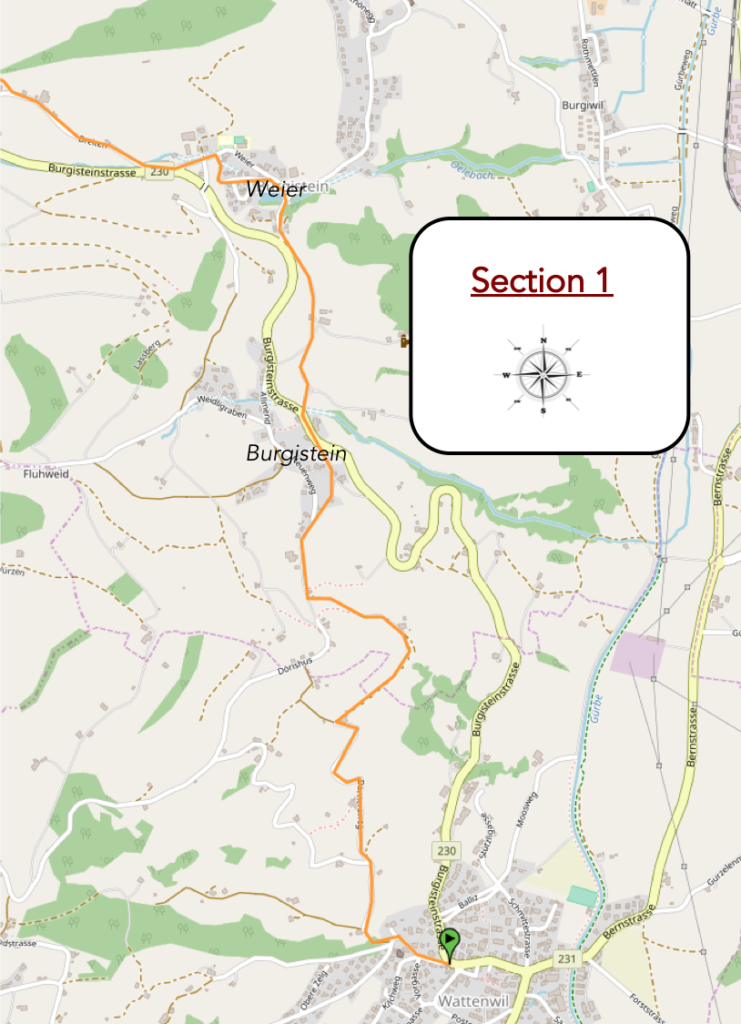 General overview of the difficulties of the route: demanding climb on the hill. 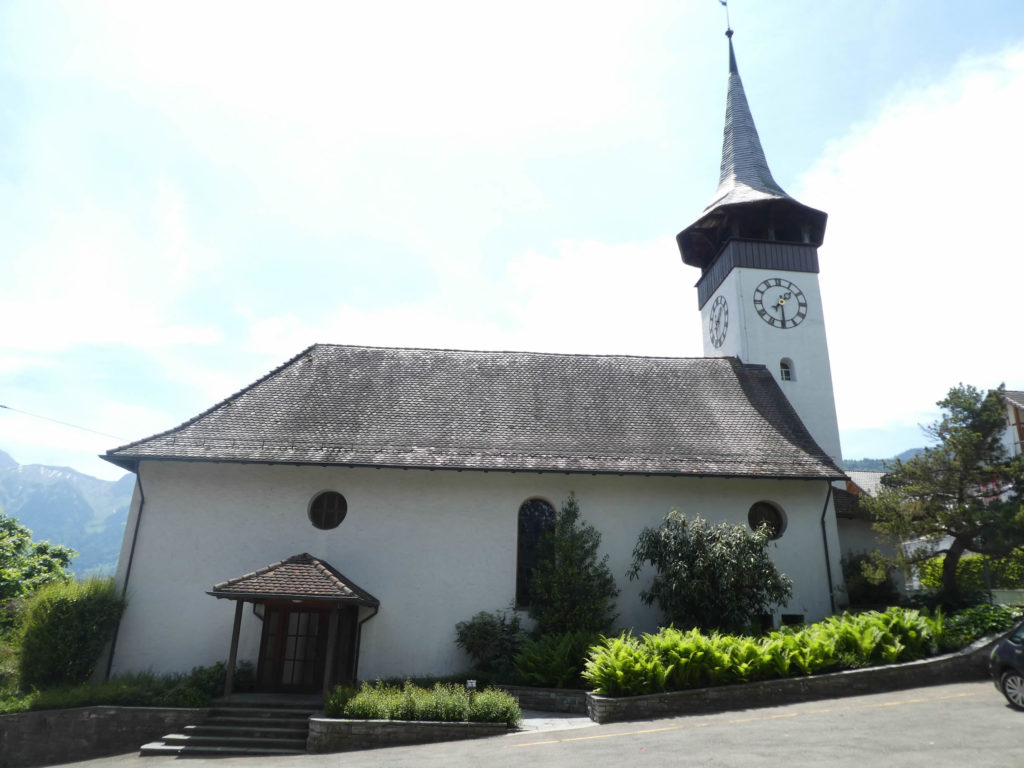 You quickly have a beautiful perspective on the village below.. 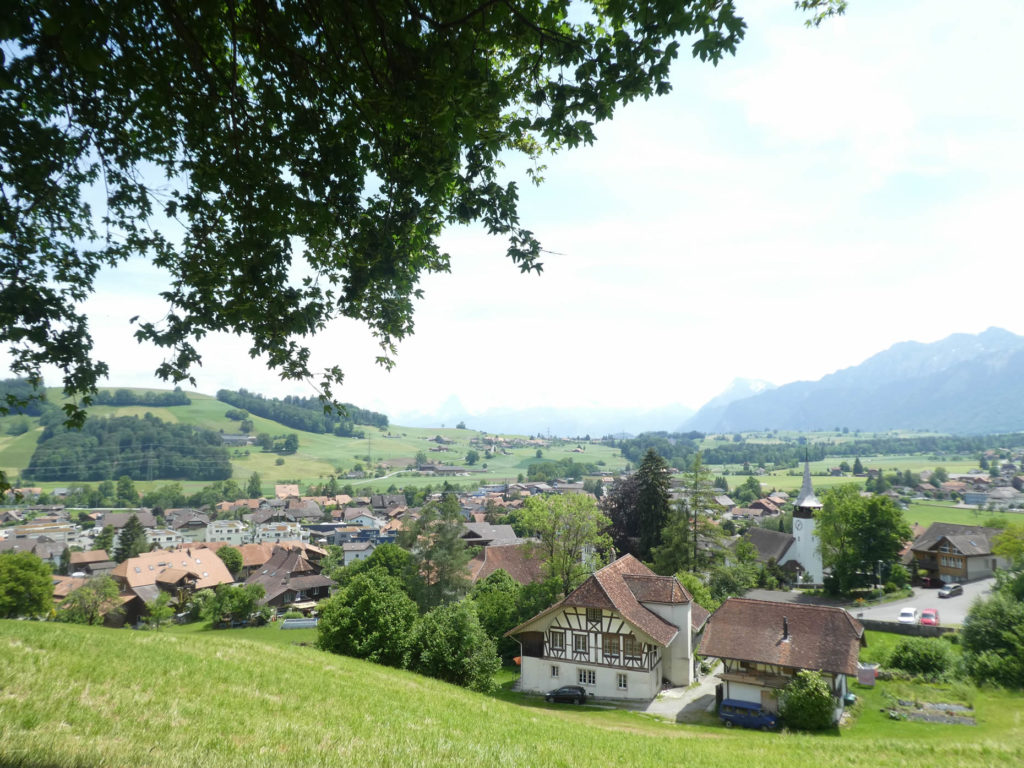 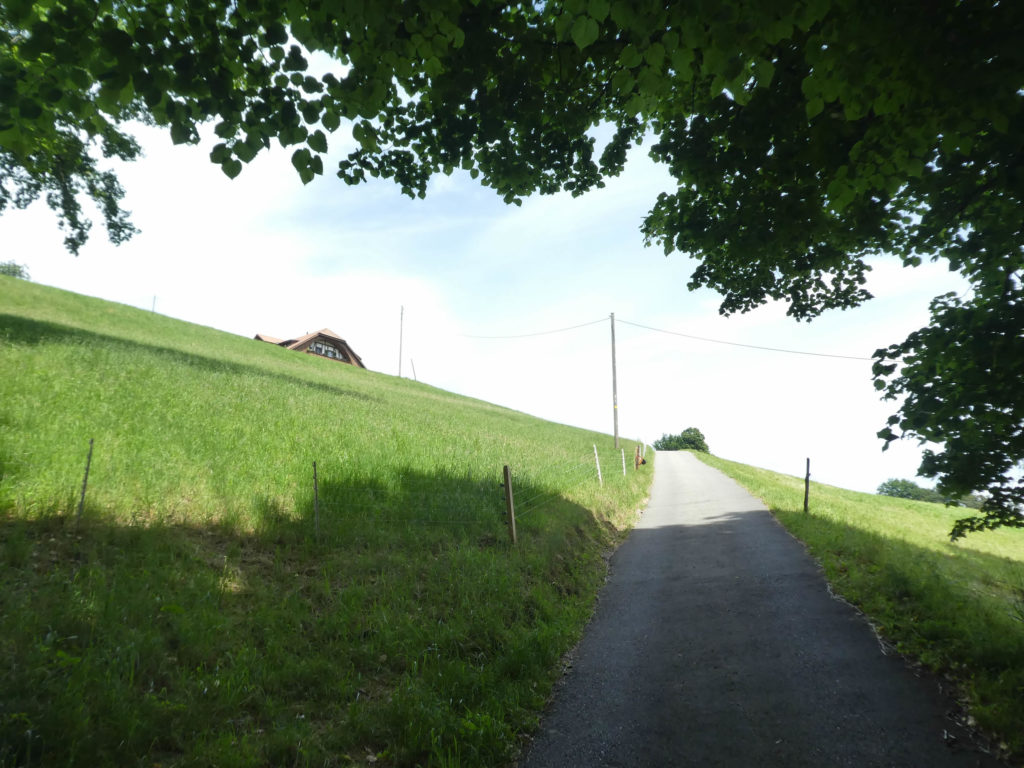 Here, turning towards the valley, you will have the privilege of seeing the giants of the Bernese Alps, the Eiger, the Mönch, the Jungfrau and the Finsteraarhorn, taking shape in front of you. 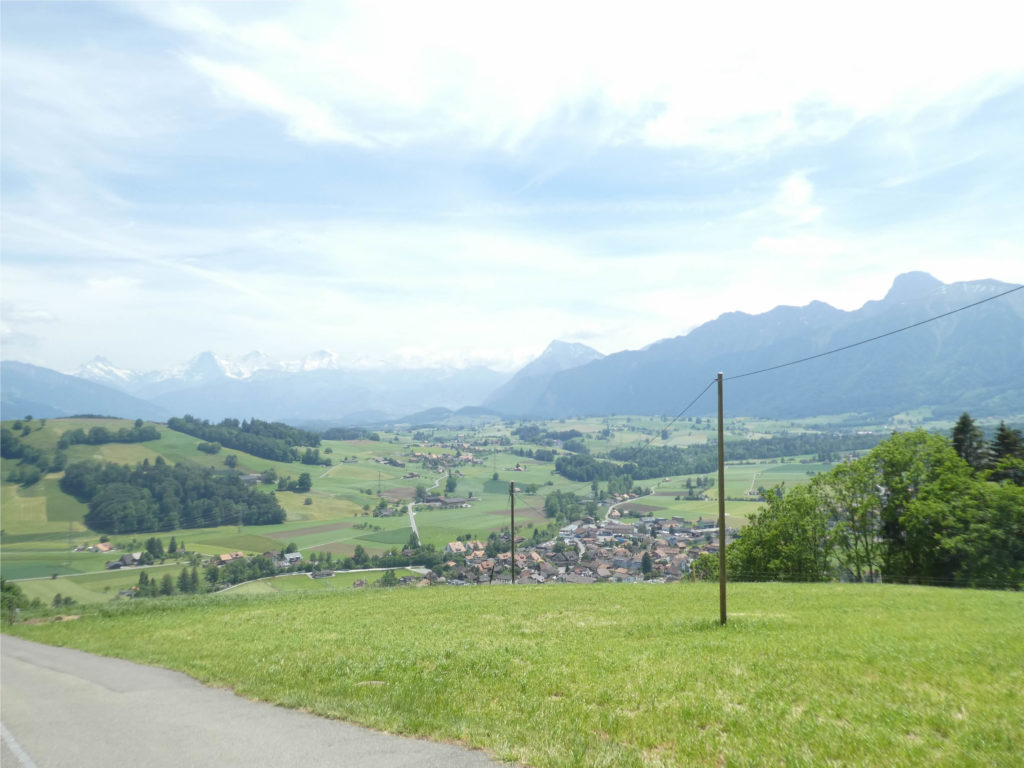 In front of you, on the other side of the valley, stands the castle of Burgistein, under which runs Via Jacobi. 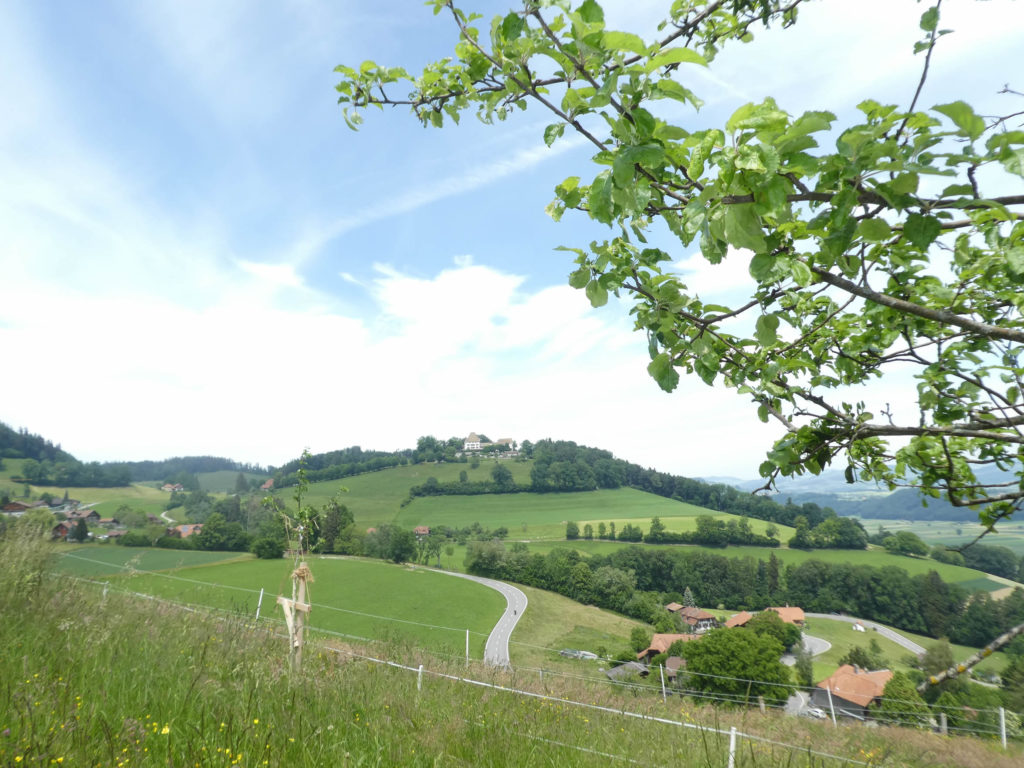 Section 2: Over hill and dale in the Bernese countryside. 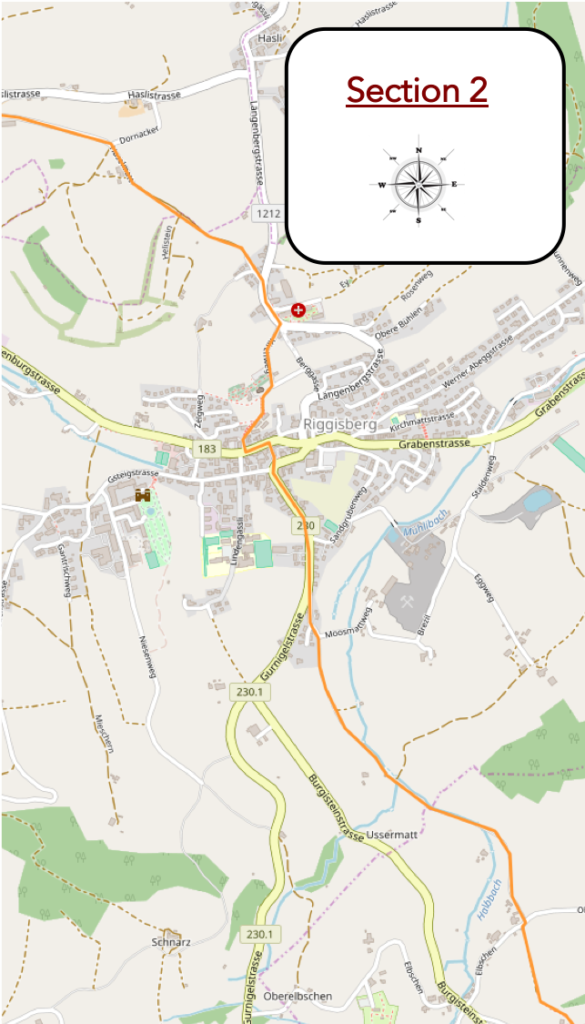 General overview of the difficulties of the route: mquite steep climb above Riggisberg.

From here, it’s a little half an hour to reach Riggisberg. Here, when you build a new farm, you know in advance that it will improve over time. Happy country which knows how to perpetuate the beauty of the constructions of their ancestors. 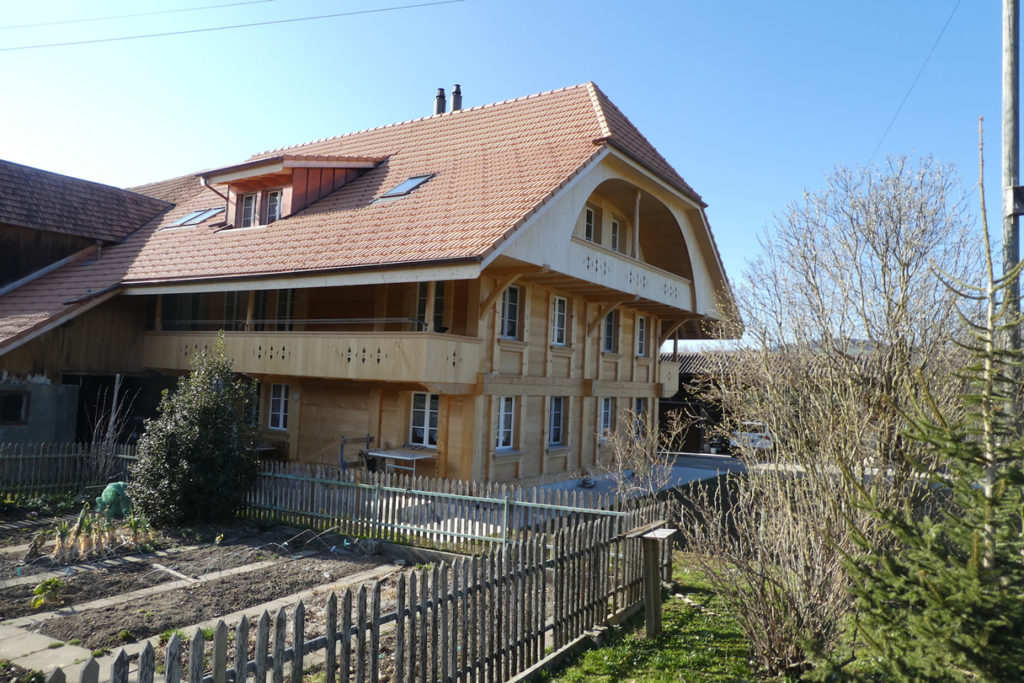 From the courtyard of the church, by playing a little with the zoom, you have in good weather in front of you the monsters of the Bernese Alps. 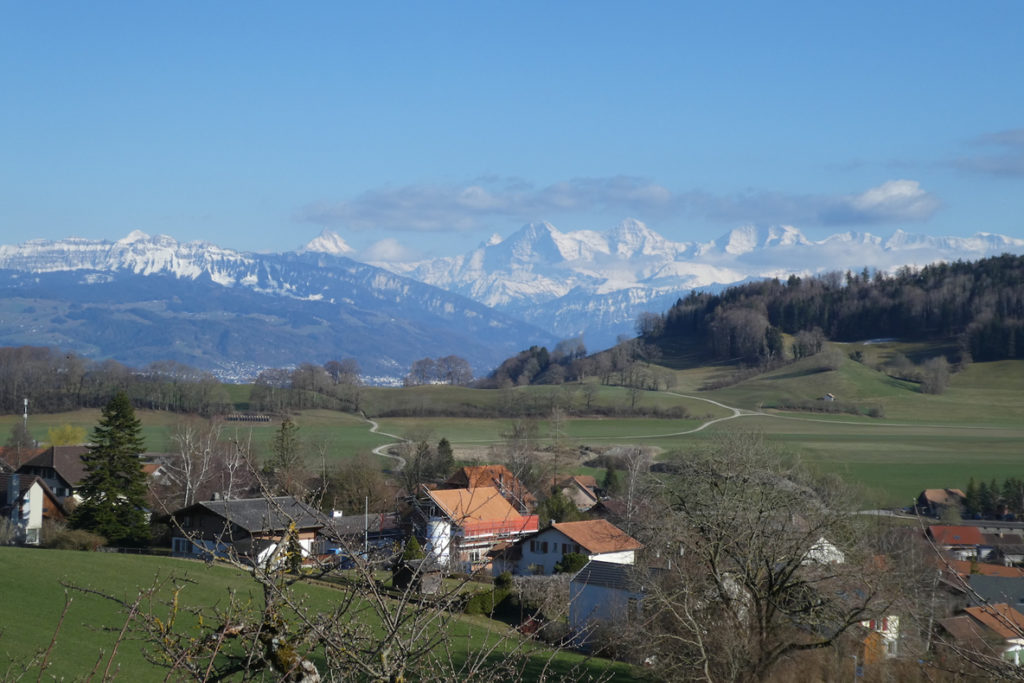 Section 3: Along the beautiful houses of the canton of Bern. 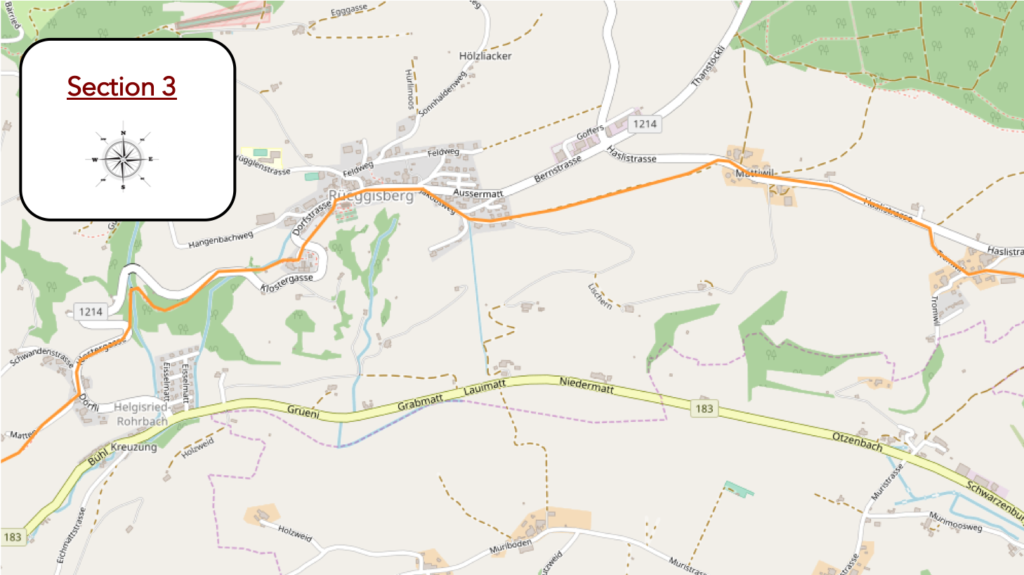 General overview of the difficulties of the routes: easy course before a more difficult descent into the dale.

The rain intensifies and the fog descends from the hill. Come on ! We are going to leave the bad weather to come back here in good weather under the sun. The contrast is then striking. Throughout the region, here is the spectacle offered to you if you turn around. Below you can see Thun Lake and, on the horizon, the majestic 4,000 meters of the Bernese Alps, the Eiger, Mönch and Jungfrau. It changes, right? But often, the pilgrim has no choice. 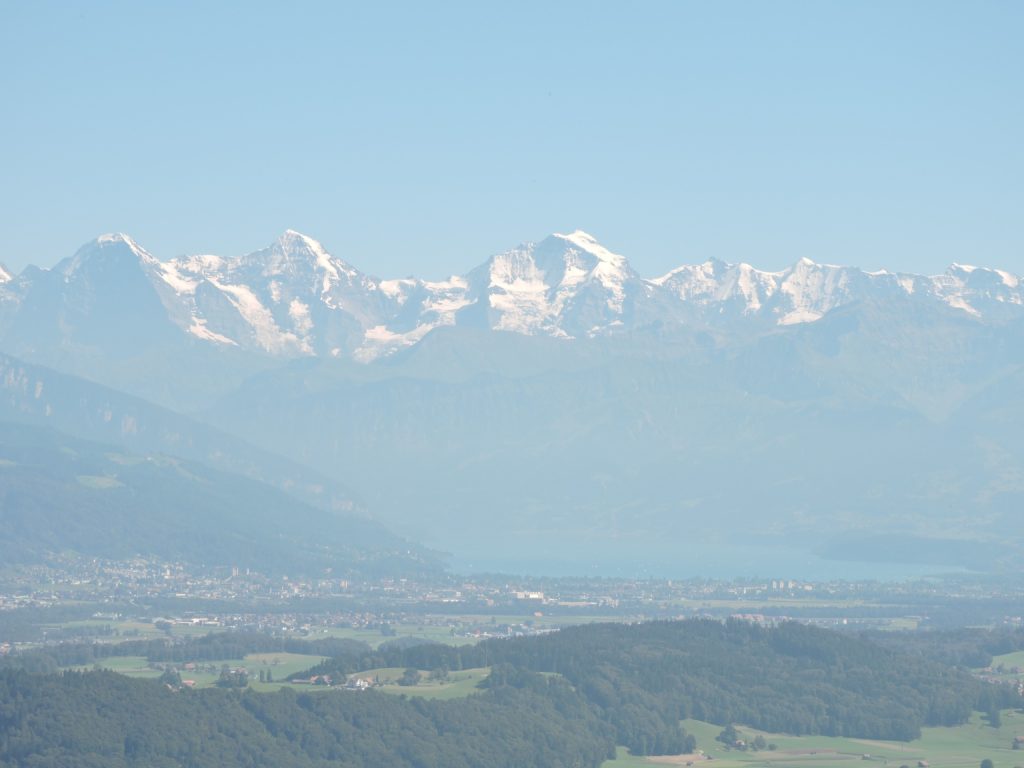 Don’t be surprised by the stage lights here. We took pictures of an alternate stage of the track returning from Bern to Rüeggisberg. So, it’s an autumn morning. Today the fog makes the landscape spooky and impressionistic. 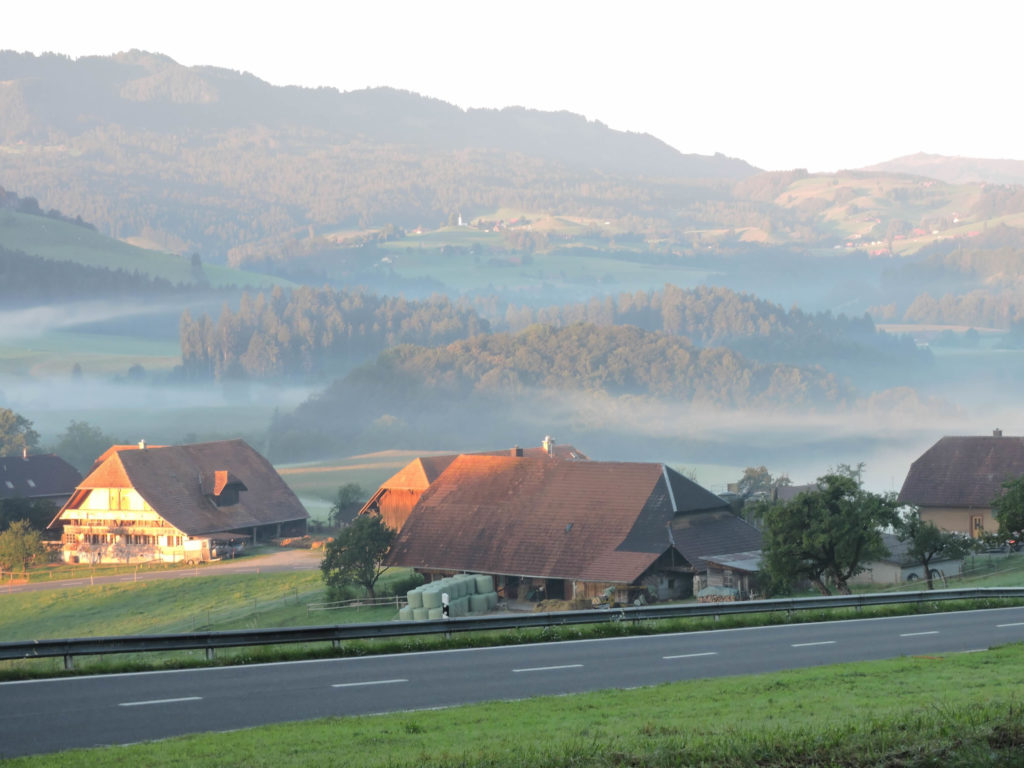 Section 4: A small passage near the Schwarzwasser River.

General overview of the difficulties of the route: marked descent then respite before climbing back up to the high plateau beyond the river.

It is a charming site in the steep valley with a restaurant where the locals flock. 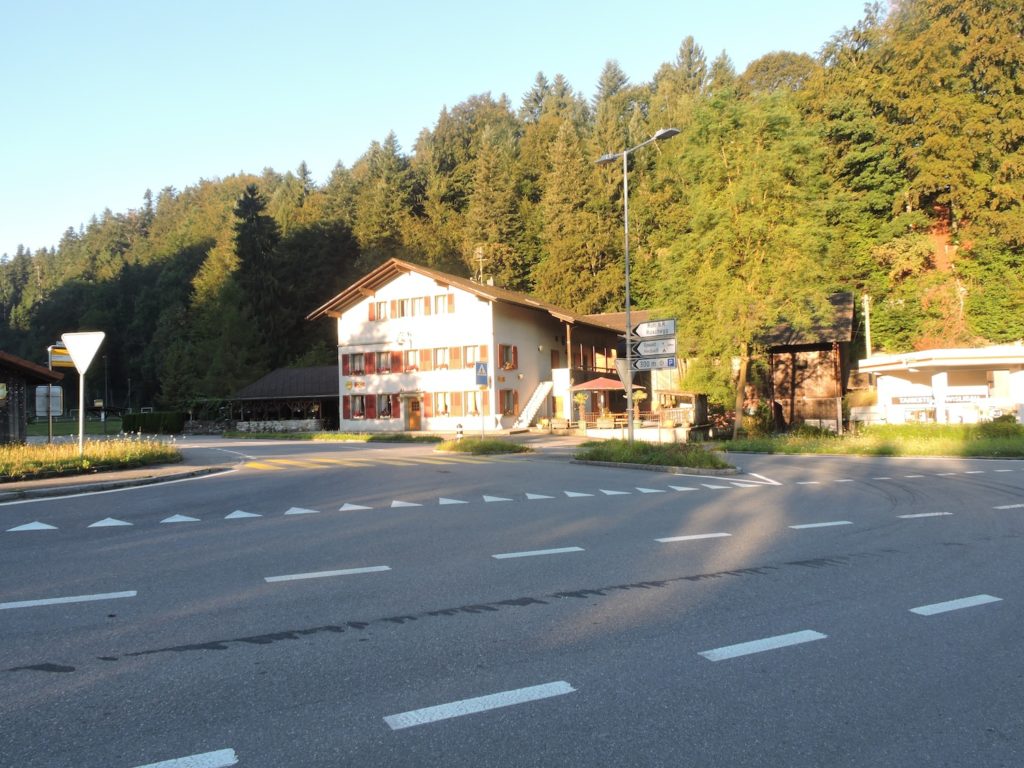 Via Jacobi then runs through the grass to the top of the hill and the slope remains very steep. 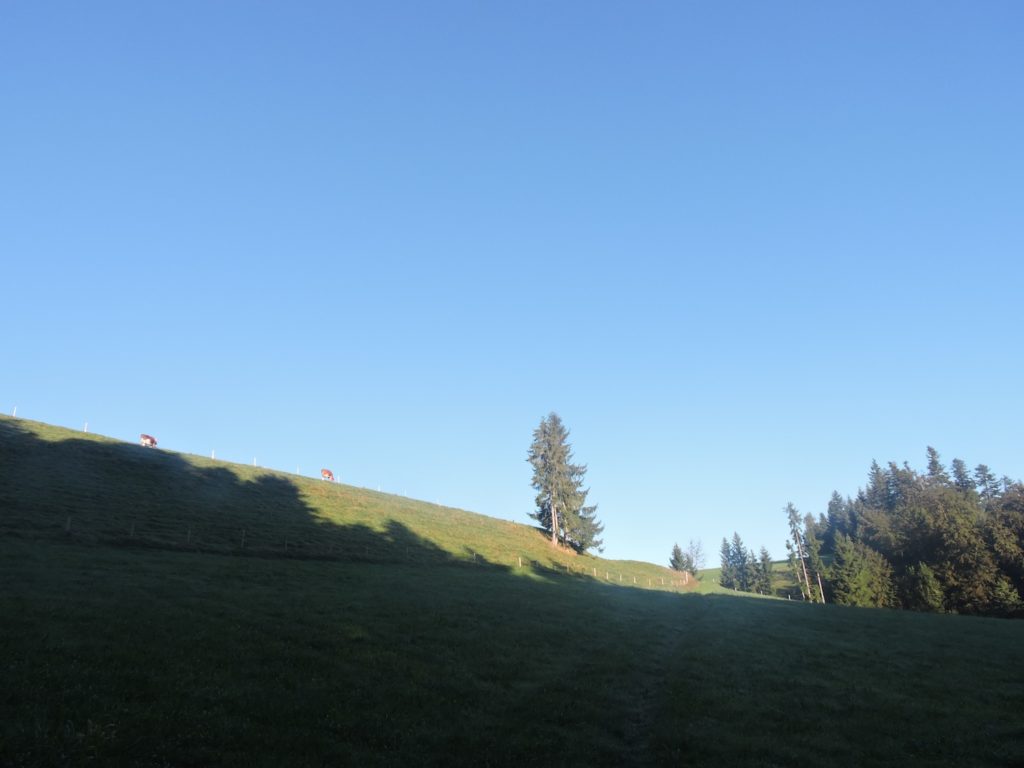 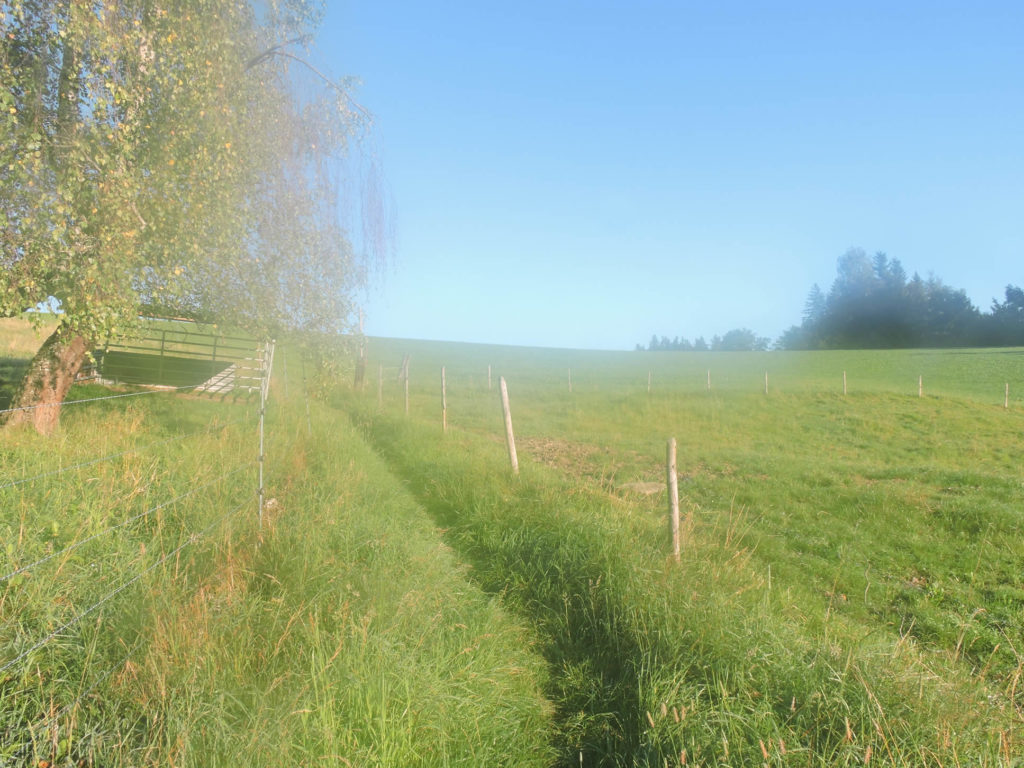 Section 5: Almost at the end of the canton of Bern.

General overview of the difficulties of the route: course without difficulty, except near Schönnentannen.

On the horizon stand the Fribourg Alps. You are gradually getting closer to French-speaking Switzerland. 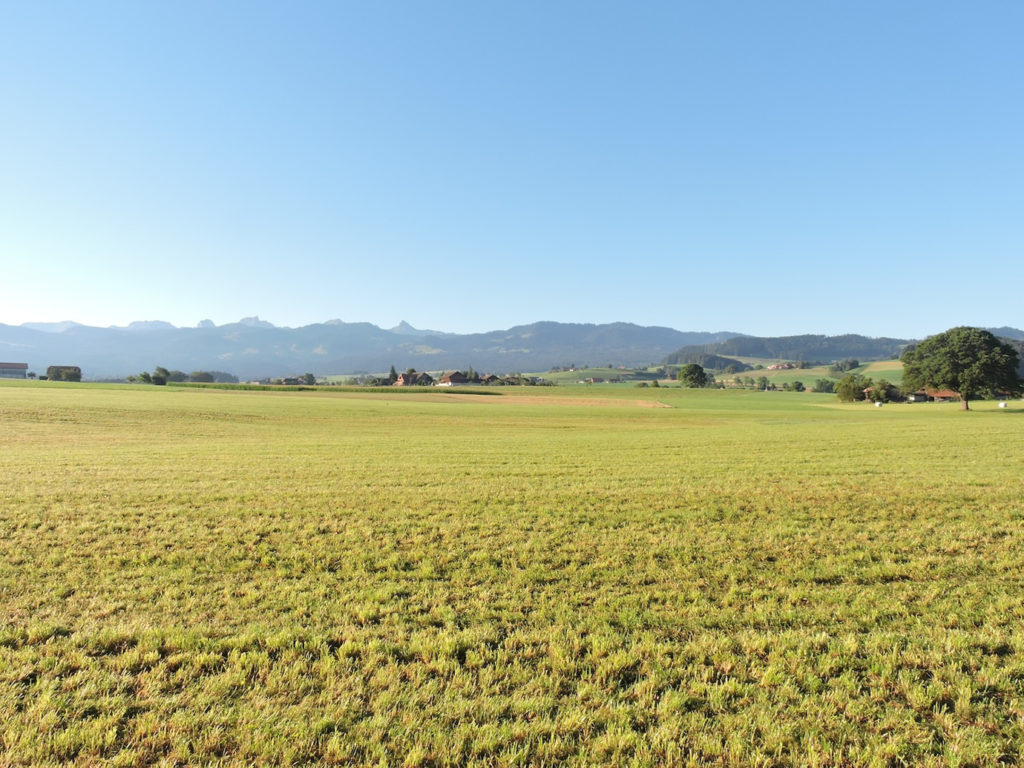 Here, an owner offers pilgrims or tourists to sleep in the straw. The Swiss Germans love this type of accommodation. Here you are a 45-minutes’ walk to Schwarzenburg. 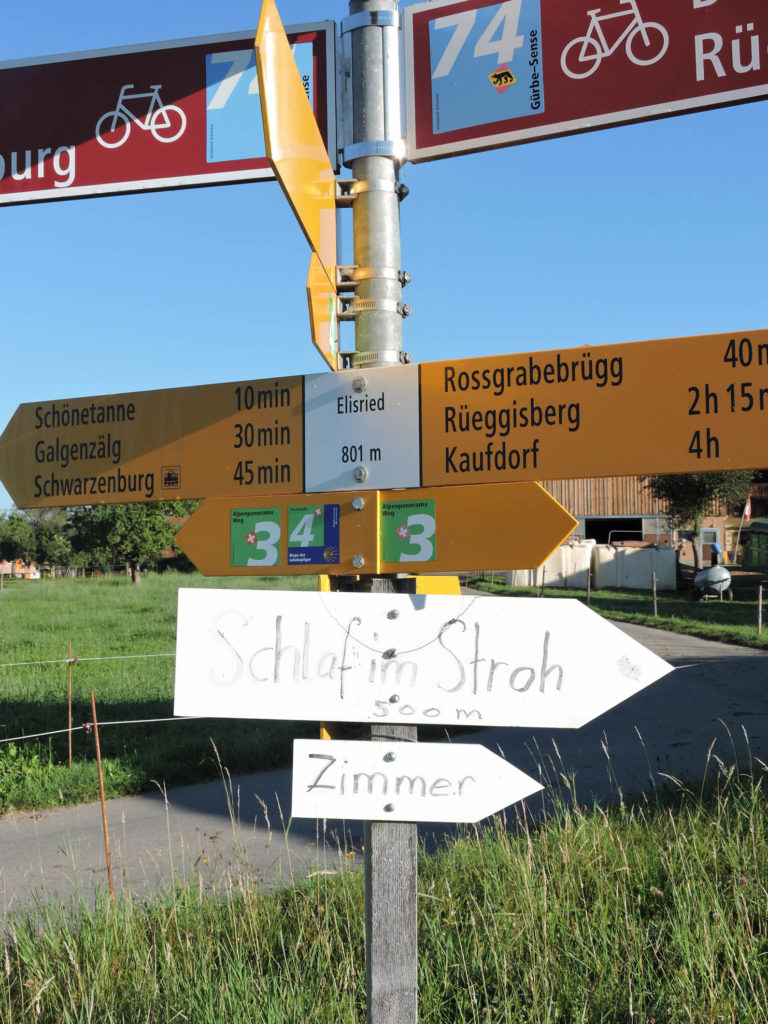 From the top of the ridge you can see Schwarzenburg nestled in gentle hills. 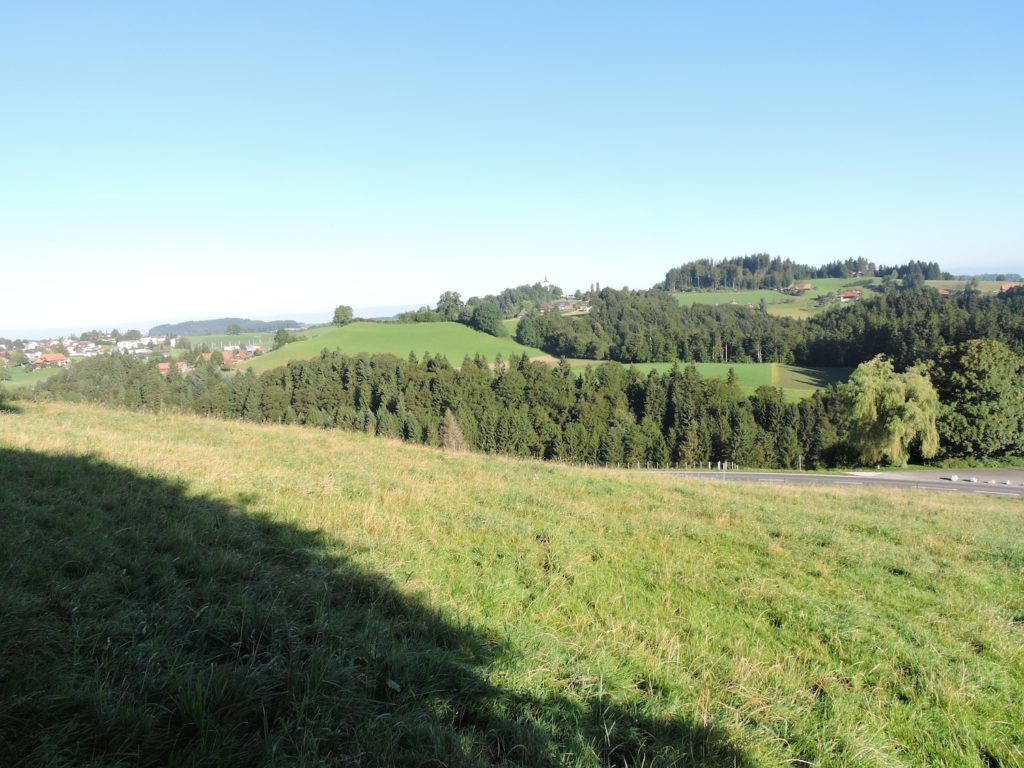 A little further down you will find yourself above Schwarzenburg, with no trace of the track. Continue without shaking in the meadows or descend into the forest. If you can’t find the way, take the road too. Schwarzenburg is just below. 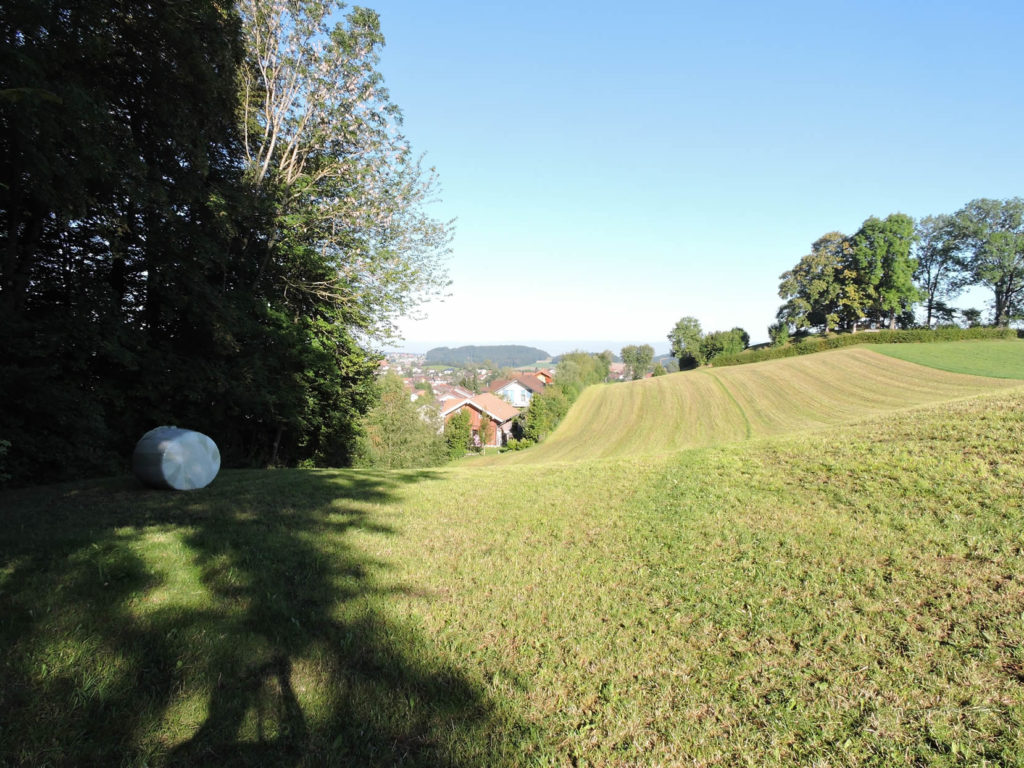 There is no difficulty of finding accommodation on this stage. Book anyway for security.

Next stage: Stage 13: From Schwarzenburg to Fribourg